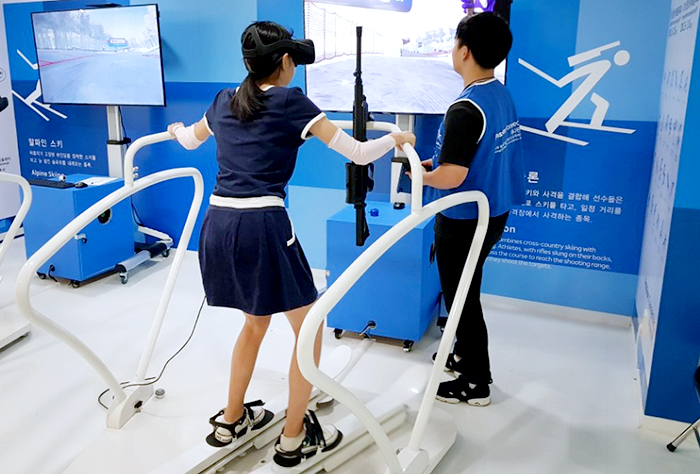 A visitor tries the VR biathlon at a hands-on experience zone for next year’s PyeongChang 2018 Olympic and Paralympic Winter Games set up at the Korea Tourism Organization Seoul Center.

With the PyeongChang 2018 Olympic and Paralympic Winter Games about 170 days away, a series of events have been launched to give Olympic fans hands-on experiences with some of the major Winter Olympic sports right in the heart of Seoul and in Gangneung, Gangwon-do Province, one of the Olympic host cities.

At Gwanghwamun Square in downtown Seoul, the Bobsleigh in the City festival is being jointly organized by the organizing committee, the Seoul city government and the Gangwon-do provincial government. It brings to Seoulites and vacationers a giant “bobsleigh” waterslide between Aug. 19 and 20. Riders will be able to enjoy the sport not on ice, but along a 22-meter high water slide that goes for 300 meters.

The ride will be open from 10 a.m. to 10 p.m. and free tickets will be given on a first-come-first-served basis. 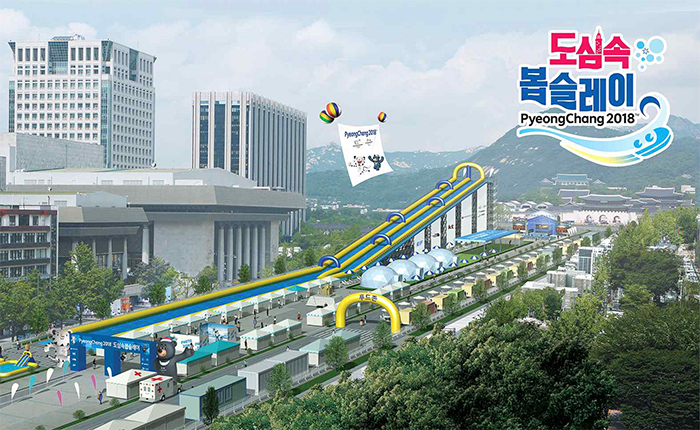 The two-day Bobsleigh in the City festival will allow visitors to ride a ‘bobsleigh’ water slide set up in the heart of Gwanghwamun Square in downtown Seoul on Aug. 19 and 20.

“VR experiences and the ‘bobsleigh’ water slide will bring dynamic thrills and entertainment to those waiting for the upcoming Winter Olympic Games,” said Kim Dae-kyun, director of the public relations department at the PyeongChang Organizing Committee. “This will hopefully lead to more interest and more participation in next February’s Winter Olympics.”