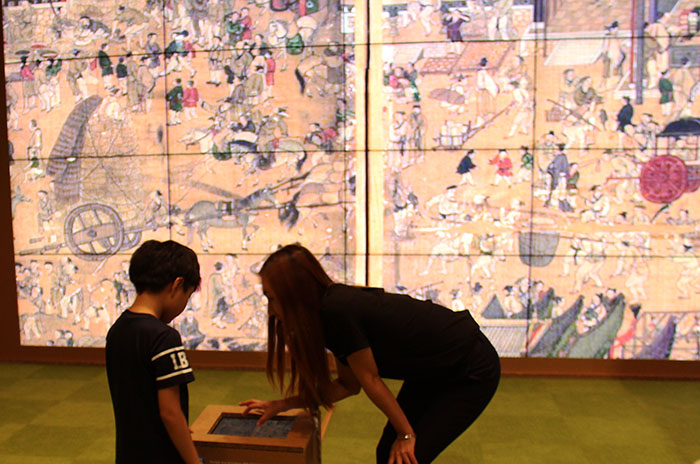 A young visitor to the Google Arts & Culture Pop-Up Lab at the National Museum of Korea on July 11 appreciates a gigapixel image of the Taepyeongseongsido (태평성시도, 太平城市圖), a famous Joseon-era painting.

The Google Arts & Culture Pop-Up Lab opened at the Children’s Museum of the National Museum of Korea on July 11.

Its most noticeable feature is the experience zone where visitors can look at a digitalized collection of items from the National Museum of Korea that have been made into billion-pixel, or gigapixel, images.

The gigapixel version of the Taepyeongseongsido (태평성시도, 太平城市圖), a painting from 18th century Joseon, reveals secrets from inside the artwork that cannot be seen with the naked eye.

In the picture by an unknown painter, approximately 2,000 people’s lives are illustrated. With the naked eye, tiny drawings of people only as big as a sesame seed fill up the castle and are barely recognizable as people. However, with the picture expanded onto a big screen, the vivid images of those people’s lives, such as a merchant selling scissors or a woman looking into a mirror, are all individually portrayed. The magnified image also conveys the texture of the artwork.

Google’s pop-up lab also has an experience zone where visitors can use VR to travel across major historic sites around the world. There are 360-degree panoramic views of Gyeongbokgung Palace and the Namhansanseong Fortress in Korea, Machu Picchu in Peru, the Taj Mahal in India and the Opera Garnier in France. 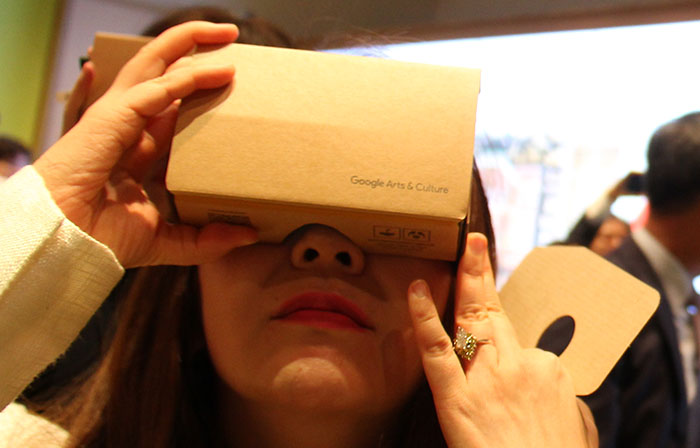 Visitors to the Google Arts & Culture Pop-Up Lab at the National Museum of Korea enjoy a 360-degree panoramic VR view of major historic sites from around the world, in Seoul on July 11.

“You can enjoy our cultural heritage items and works of art with more immersion and more interaction here,” said Laurent Gaveau, head of the Google Cultural Institute Lab. “The way in which we access culture is changing due to technological developments like virtual reality (VR) and artificial intelligence (AI). I hope this exhibition will give visitors, especially children, a chance to get access to cultural heritage assets from around the world and, also, to boost their curiosity about culture, the arts and science,” he said.

The exhibition is open to the public for free and continues until Aug. 27.