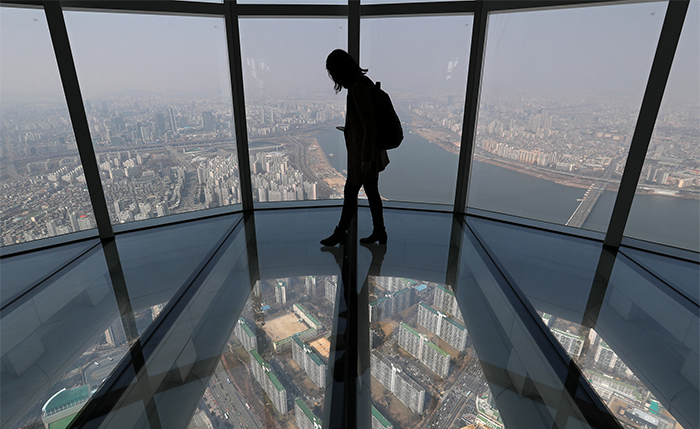 Lotte World Tower’s Sky Deck observation platform, 478 meters from the ground on the 118th floor, offers surreal views of Seoul’s cityscape, as miniature cars move along streets that connect clusters of blocks that give shape to a bustling city.

A “vertical metropolis” is the term coined for Lotte World Tower, a supertall skyscraper that now looms over the banks of the Hangang River in southern Seoul.

The tower, with a height of 555 meters, stands 123 floors tall, with an additional six floors below ground. The total floor space comes to around 805,872 square meters, equivalent to 115 soccer fields. The tower weighs a hefty 750,000 tons, about how much the entire population of Seoul would weigh on a scale, roughly 10 million people.

Construction on the new tower began in November 2010, with around KRW 4.2 trillion in investments. Over the past six years and three months, around 5 million workers were deployed on the project.

As of today, the tower is the fifth tallest building in the world. It stands in line behind four taller companions, including Dubai’s Burj Khalifa (828 meters), China’s Shanghai Tower (632 meters), Saudi Arabia’s Abraj Al-Bait Clock Tower (601 meters) and another Chinese skyscraper, the Ping An Finance Center (599 meters) in Shenzhen. 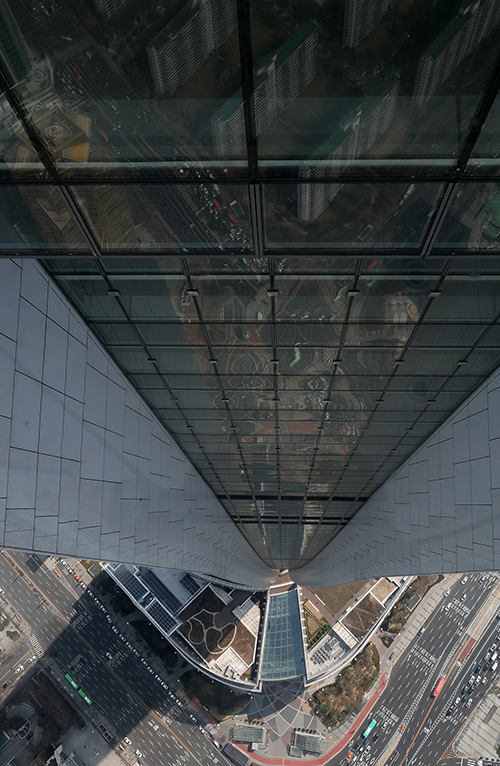 A view of the streets below, seen from the 118th floor the Sky Deck observation platform, offers a dizzying perspective of Seoul’s traffic, immediately under one’s feet.

The tower’s Seoul Sky, located from the 117th to 123rd floors, offers surreal views of the cityscape from its dizzying heights. Seoul Sky has three Guinness Book Records to its name. The Sky Deck on the 118th floor was listed as the “highest placed glass-floor observation platform.” The Sky Shuttle, the tower’s elevator, capable of traveling 117 floors in under one minute, was listed as the “fastest double-deck elevator” and the “elevator covering the longest distance,” a height of some 500 meters.

Visitors to the Sky Deck, on the 118th floor, can enjoy two observatories made entirely of glass, from the tall windows to the very floors on which you stand. This 478-meter-high vantage point offers panoramic views of Seoul from a whole new perspective. From so high up, Seoul’s buildings look like miniature blocks stacked in neat rows, its inhabitants tiny Lilliputians riding in cars the size of ants. The northern deck provides views of the Hangang River and its surrounding landscape. The southern deck offers a cityscape that includes a silhouette of the Namhansanseong Fortress in the far distance.

One of the decks even has a trick up its sleeve. The seemingly opaque glass platform can turn transparent at the press of a button. Unsuspecting visitors will, for a brief second, feel like they are suspended in mid-air, half a kilometer up from the busy streets below.

The 1st to 12th floors will be home to financial and medical offices, fitness centers, and several galleries. Floors 14 to 38, designated as the Prime Office block, will be occupied by corporations. Some of these floors are already in use by the Lotte Corporation. On floors 42 to 71 you will find the Signiel Residence, a series of luxuryapartments. There are a total of 223 residential units up for rent. The Signiel Seoul, a six-star hotel, sits on the 76th to the 101st floors. Finally, floors 108 to 114 have been designated as the Premier 7. These seven floors are spaces that cover the entire floor of the tower, and can be used as personal office spaces or as venues for various functions. There’s also a sky terrace on the 120th floor, and an afternoon tea and cocktail lounge on the 123rd.

The tower, Seoul’s newest landmark, will have its official opening on April 3. “The Lotte World Tower is a vertical metropolis with avenues for shopping, leisure and play,” said senior managing director of Lotte Corporation Park Hyun-Chul during a press tour on March 21.

“As Seoul’s landmark, it’s our belief that Lotte World Tower will rise up as an engine of growth for the tourism industry, not only for the Jamsil and Songpa neighborhoods and for the greater Seoul metropolitan area, but for the entire country as a whole,” he said. 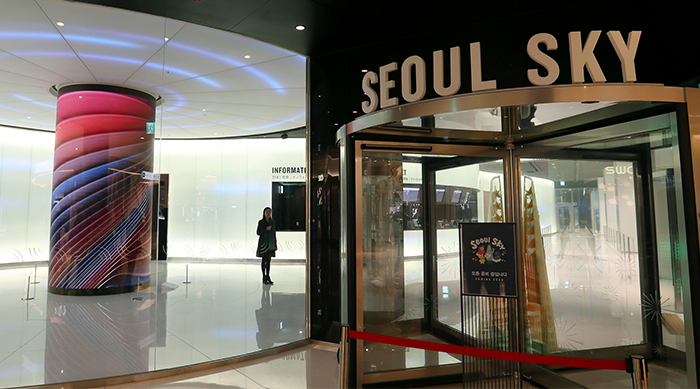 Seoul Sky, Lotte World Tower’s observation decks on the 117th to 123rd floors, can be reached by taking the Sky Shuttle, the tower’s elevator capable of traveling 117 floors in under one minute. 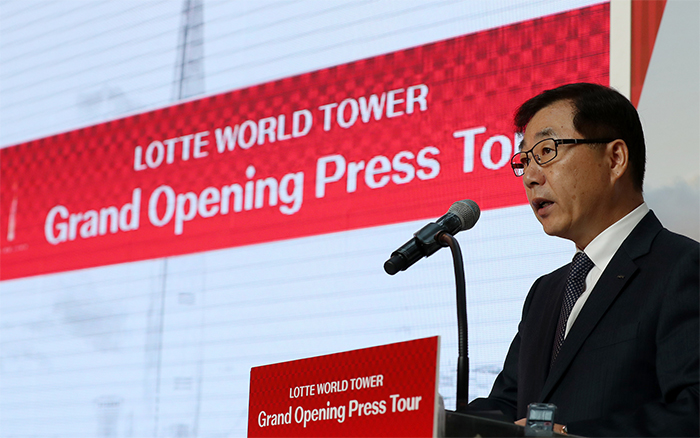 Senior managing director of Lotte Corporation Park Hyun-Chul explains the significance of the Lotte World Tower in the context the Korean tourism industry, during a press tour at the tower on March 21.