The Nakdonggang River (낙동강, 洛東江) is the longest river in South Korea. It flows for 510 kilometers and has a drainage basin covering 23,384 square kilometers. The river originates around Taebaeksan Mountain in Gangwon-do Province, and meanders its way through Gyeongsangbuk-do and Gyeongsangnam-do provinces before reaching the Straits of Korea near Busan. Along the banks of the slow river, we find the upstream Andong Basin, the midstream Daegu Basin and then the downstream plains of Gyeongsangnam-do Province. Since time immemorial, economic and cultural activity flourished in these riparian cities. The name “Nakdong” means “river that flows to the east of Sangju,” an old city in the northwest corner of Gyeongsangbuk-do Province. In short, the river itself embodies the history of Yeongnam, the southeastern region of the Korean Peninsula. After 415 years being based in Daegu, the provincial government of Gyeongsangbuk-do Province relocates to Andong City on Feb. 19, 2016. Dongin-mun Gate is the eastern entry point to the city of Andong. Designed in a Hanok-style, the city’s four main gates beckon visitors to the city to experience first-hand its history and heritage. Traditional thatched homes in the Andong region commonly have ggachi rooftops, or magpie rooftops, that help to ventilate the kitchen, let out smoke and bring in natural light. The houses are built as enclosed squares with living quarters, a kitchen and a shed all on the inside. The people who lived in these confined homes could keep out predators, such as the occasional tiger, by simply shutting one front door. More practically, it also allowed them to keep out the cold during the winter. A 17-meter brick pagoda, the tallest of its kind in Korea, stands in Beopheung-dong in Andong City. Domestically, this style of pagoda is uncommon. Experts estimate this structure to date back to Unified Silla (668-935). The Hahoe Village in Andong City is one of the few traditional villages in the country that maintains typical Joseon homes and a traditional town layout. From the Hahoe Village, you can see the Buyongdae Cliffs (부용대, 芙蓉臺). Old-time residents in Hahoe believe their village forms the shape of a lotus flower, and that the Buyongdae Cliffs were the best observation point from which to look down on the “lotus” from above. The Nakdonggang River flows in an S-shape bend around the village. The inner riverbanks are sandy due to slower currents, while the outer banks with faster currents have, over the centuries, eroded the nearby cliffs and carved out impressive natural formations, like the Buyongdae Cliffs. The Byeongsan Seowon (병산서원, 屛山書院) is a memorial structure built to commemorate the achievements of the Confucian scholar and politician from 16th century Joseon, the late Ryu Seong-ryong (류성룡, 柳成龍) (1542-1607). The name for the entrance to the building, the Bongnyemun (복례문, 復禮門), was derived from the Analects of Confucius. It embodies the lesson that one must abandon personal selfishness and return to a purer, past state. The Andong Gunja Village is the home of the Gwangsan Kim clan, and the buildings here reflect the architectural style of 16th century Joseon. One of the central buildings here is the Hujodang House (후조당, 後彫堂) (headboard pictured above, bottom). The name “Hujo” is derived from Chapter Nine of the Analects of Confucius, which states that, ‘Only after winter comes, do we learn that the pine tree withers later than the others’ (歲寒然後 知松柏之後彫). That is to say, the true worth of a virtuous person is discovered through the course of time. 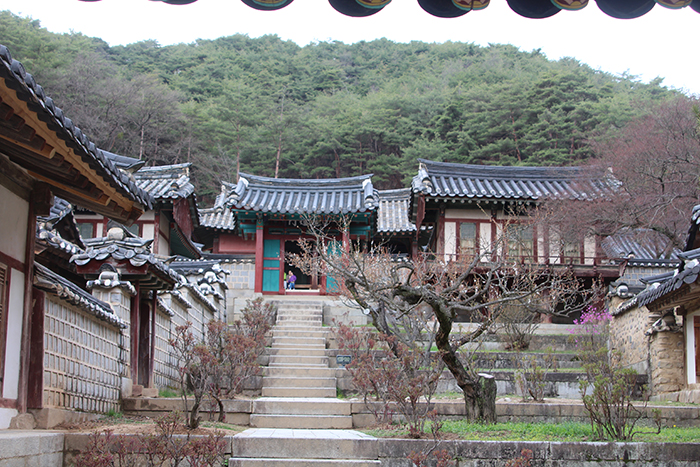 The Dosan Seowon was established in 1574 to pay tribute to Yi Hwang (이황, 李滉) (1502-1571), a leading Confucian scholar of Joseon times. The memorial tablet at the site (above, bottom) is written in the handwriting of the 77th descendent of Confucius, Kung Te-cheng (쿵더청, 孔德成) (1920-2008). The larger characters read Chu Ro Ji Hyang (鄒魯之鄕), which means, “Home of Confucius and Mencius,” reminding visitors of the deep Confucian values that still exist to this day across the Andong region.