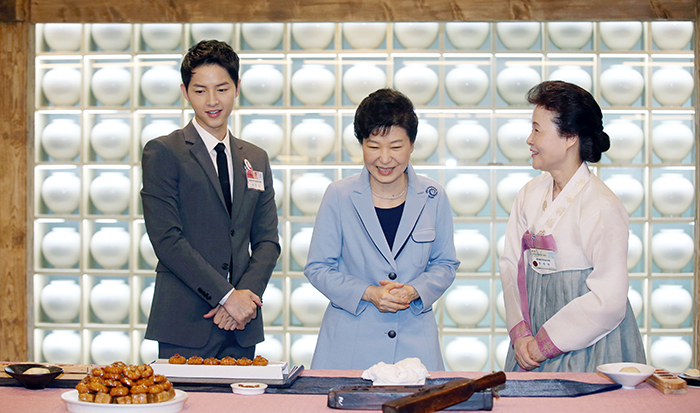 President Park Geun-hye (center) talks with Director Yoon Sook-ja (right) of the Institute of Traditional Korean Food on April 11 during the opening ceremony for the K-Style Hub.
Before that, President Park made yakgwa, a traditional Korean dessert made with flour and honey, together with actor Song Joong-ki (left).

“Hands-on experiences are better than a thousand lessons. This will leave a good impression and this will bring more interest in our food from not only our children, but from foreign tourists, too.”

So said President Park Geun-hye as she was making yakgwa, a traditional Korean confectionary made of flour and honey alongside actor Song Jong-ki on April 11 during the opening ceremony of the K-Style Hub. The hub is a venue where people can see, sample, purchase and even make traditional Korean foods, as well as browse exhibits about Korean tourism and pop culture.

Among those in attendance at the ceremony were Minister of Culture, Sports and Tourism Kim Jongdeok, Minister of Agriculture, Food and Rural Affairs Lee Dong-phil, Song Joong-ki who was recently selected as an Honorary Ambassador for Korean tourism, and Director Yoon Sook-ja of the Institute of Traditional Korean Food. 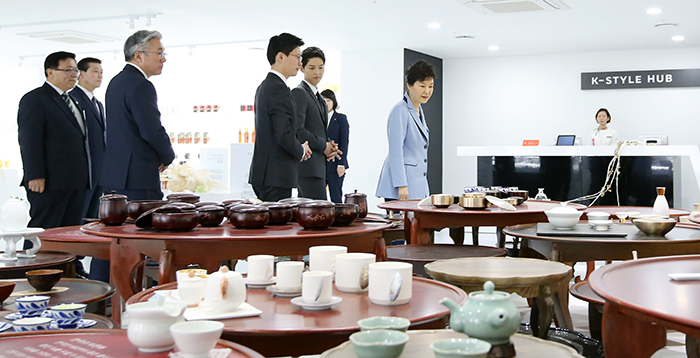 President Park Geun-hye looks around exhibits on display at the newly-opened K-Style Hub on April 11.

As she admired images of Korean cuisine in an exhibit on the third floor of the Korean Food Exhibition Hall, President Park said, “You can have fun here, finding the characteristics of Korean cuisine and the excellence of choosing ingredients to make it. You get a better understanding of traditions in our foods, as well.”

The exhibition gives a glimpse into the seasonal ingredients and wisdom embedded in Korean cuisine.

At the Korean Food Hands-on Experience Hall on the fourth floor, President Park sampled some “kimchi chips,” a dried version of kimchi. As an official from the hall explained that they had developed the kimchi chips as an effort to make it easier for more people to enjoy kimchi on the table or at parties, President Park asked, “What kind of alcohol will go best with these chips?” She got an answer. “Moonbaesool,” a traditional spirit. 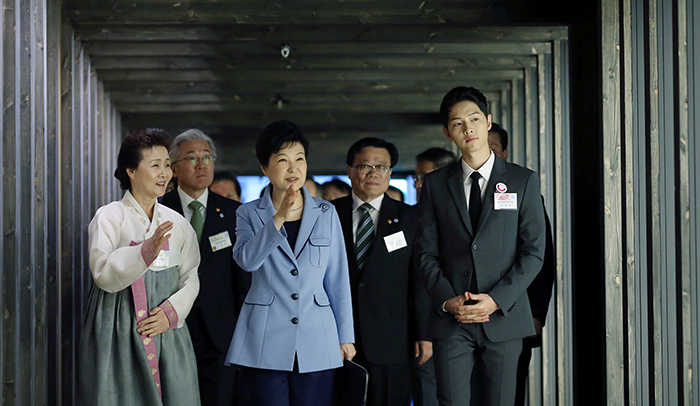 Director Yoon said, “There we have samgyetang, a food that Song Joong-ki made in ‘Descendants of the Sun,’” as she pointed at a bowl of samgyetang, or ginseng chicken soup, on exhibit here. Song, standing next to the president, said, “Since it was featured in the drama, samgyetang has grown in popularity across China. I heard that many Chinese people enjoy having their own version of samgyetang. I would say that Korean samgyetang is by far the best of all, though.”

The K-Style Hub allows visitors to have realistic experiences with Korean pop culture and to get familiar with medical tourism, as well as traditional Korean cuisine, thanks to both highly advanced technologies. There are also chances to try ski jumping in Pyeongchang, Gangwon-do Province, and to virtually visit some of the country’s top tourist spots, including Gyeongbokgung Palace, Myeongdong, Nami Island and Jeju Island. 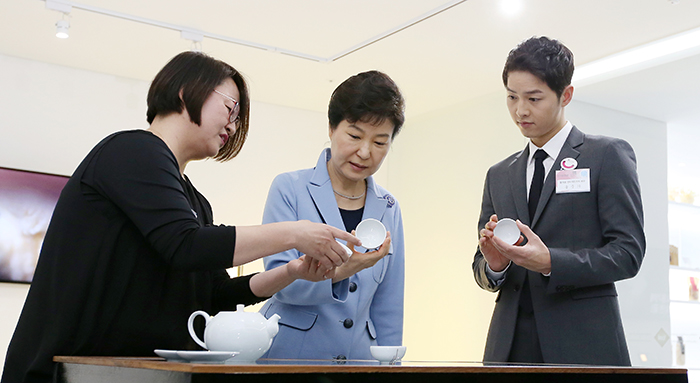 President Park Geun-hye (center) listens to an explanation from Kim Hye-young (left), one of the entrepreneurs at the Culture and Creativity Academy,
a training facility aimed at cultivating young talent, about a state-of-the-art tea table equipped with sensors that can monitor the tea’s temperature. 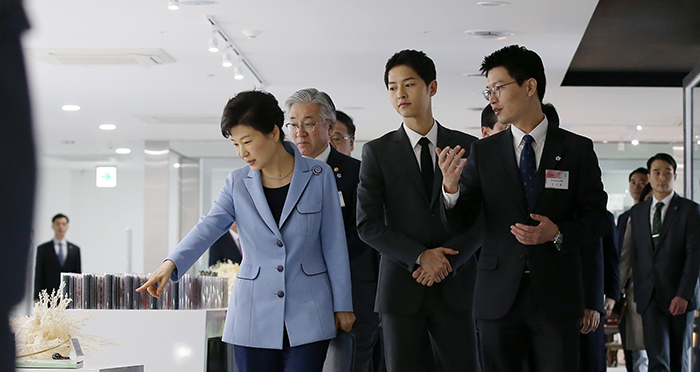 President Park Geun-hye browses a range of items related to Korean traditional arts and crafts on exhibit on the fifth floor of the K-Style Hub on April 11.