Take the K-Travel Bus to Tongyeong

On March 25 and 26, the Visit Korea Committee (VKC) held a successful opening ceremony for its K-Travel Bus program. The ceremony was graced by the presence of the VKC chairman himself, Park Sam Gu, as well as by an appointed honorary ambassador of the K-Travel Bus, actor Jung Il-woo. Also present at the event was the charming pop girl group Tahiti.

The opening ceremony was attended by 60 non-Koreans, comprising of both international students as well as tourists. They were specially chosen from a pool of hundreds of applicants who wanted to travel to some of the hidden gems and beautiful tourist spots in Korea. 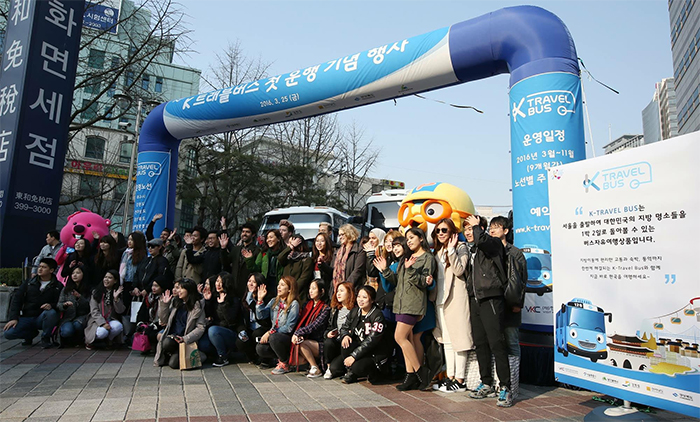 Tourists pose for a photo during the opening ceremony for the K-Travel Bus. 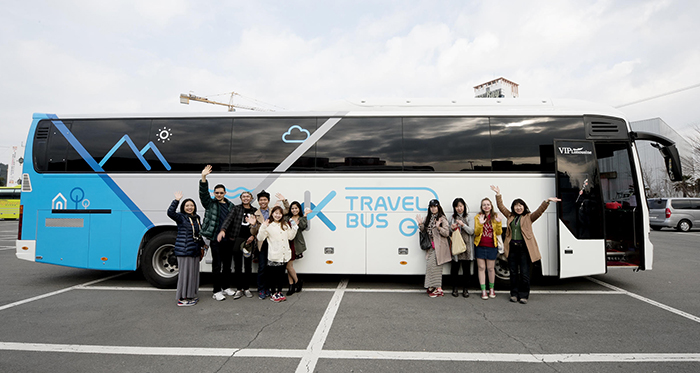 Tourists on their way to Tongyeong pose for a photo in front of the K-Travel Bus.

The K-Travel Bus is a “Korean travel bus experience program” that offers convenient and memorable travel escapes to some of the most tranquil and placidly beautiful spots in Korea at a very reasonable and affordable price. These two-days-one-night bus tours basically aim at promoting other tourist destinations in Korea, aside from the usual places — Seoul, Busan, Jeju Island, among others — that non-Koreans often visit when they come to Korea.

The K-Travel Buses primarily head to six destinations: Daegu, Gangwon Province, South Jeolla Province, North Gyeongsang Province, the southeast region and Tongyeong, a city that has been dubbed the “Tourism City of the Year.” All the trips depart from the country’s capital, Seoul, in front of the DongHwa Duty Free store outside exit No. 6 of Gwanghwamun Station along subway line No. 5.

For this trip, I was lucky enough to be able to join the group that visited the beautiful port city of Tongyeong, a city known as the “Naples of Korea,” together with Geoje. The two-day-one-night trip was superb, which made me want to visit the city over and over again if I had the time. From Seoul the trip took almost five hours, but I think it’s worthwhile for we were able to experience a different side of Korea. The serene environment and refreshing atmosphere of Tongyeong welcomed us. Needless to say, since this trip was a special trip for the K-Travel Bus program, we were also able to taste some of the city’s most delicious delicacies and, of course, everything was included in the price. Note that the K-Travel Bus fee that non-Koreans pay excludes any meal expenses, except for breakfast that will be served the following day. 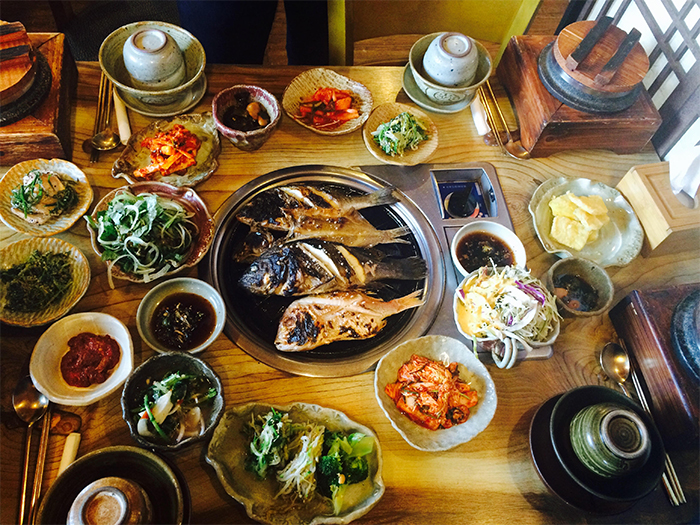 Our great lunch is at Tongyeong’s most beloved grilled fish restaurant.

After having a delicious lunch, our group proceeded to our next destination, the Hallyeo Haesang National Marine Park. There, we took a cable car to see the magnificent landscape of the Hallyeo Haesang National Marine Park. There are 48 cars with an eight-person capacity and they circulate continuously from the lower depot, located at the Donam Tourist Complex, all the way to the upper depot, located just below the peak of Mireuksan Mountain. I assure you that you will be mesmerized by the spectacular views that the cable car ride offers. What more can you ask for? You can have the thrill of the 1,975-meter cable car ride while at the same time seeing the historical site of one of the most victorious battles in Korean history, the Great Battle of Hansan, as well as the beautiful scenery of the Hallyeo Haesang National Marine Park. 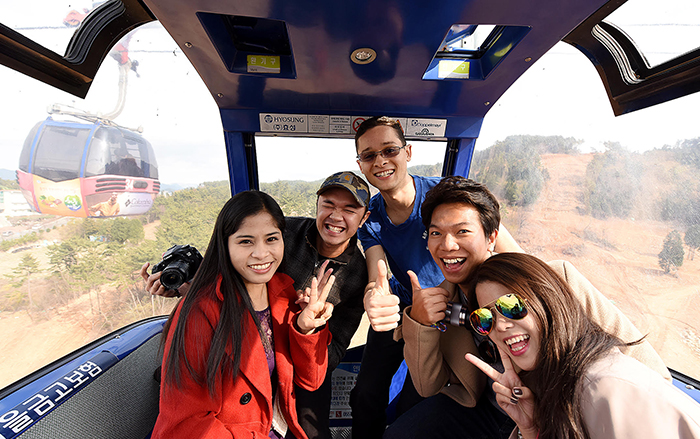 Travelers on the K-Travel Bus to Tongyeong pose for the camera inside a cable car on their way to the Hallyeo Haesang National Park. 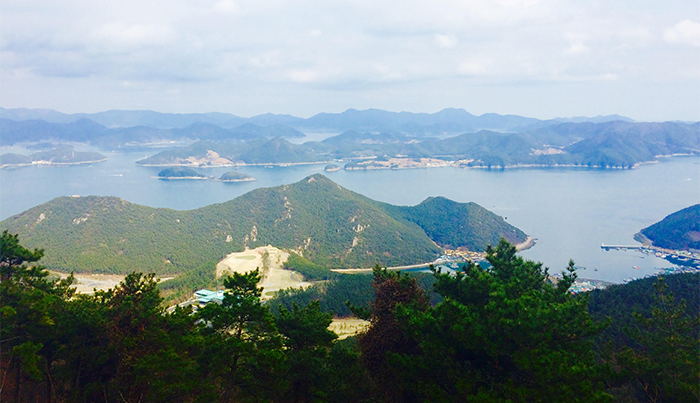 From the peak, there are magnificent views of the Hallyeo Haesang National Park. 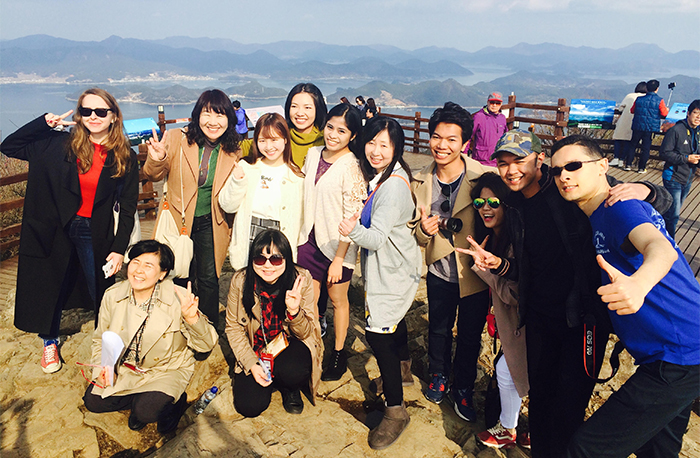 Travelers on the K-Travel Bus to Tongyeong arrive atop Mireuksan Mountain.

After the cable car ride, our group visited the Tongyeong Samdosuguntongjeyeong Naval Station and the Tongyeong Sebyeonggwan. The Tongyeong Samdosuguntongjeyeong Naval Station is Historic Site No. 402. It used to be the headquarters of the naval forces of three provinces, namely Gyeongsang, Jeolla and Chungcheong, as the names implies, during Joseon times. “Sam” means “three” and “do” means “island” in the Korean language. It took 13 years to finish renovating the place. Inside the complex is the city government offices and 12 handicraft workshop halls, as well as the Tongyeong Sebyeonggwan, National Treasure No. 305. 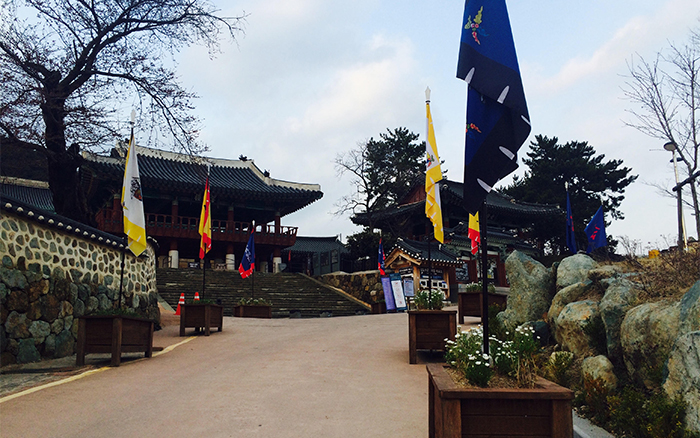 Afterward, the group went to downtown Tongyeong to see and experience first-hand the infamous turtle ship, a historical warship used by Admiral Yi Sun Shin’s naval troops during the Imjin War that broke out in the late 16th century. 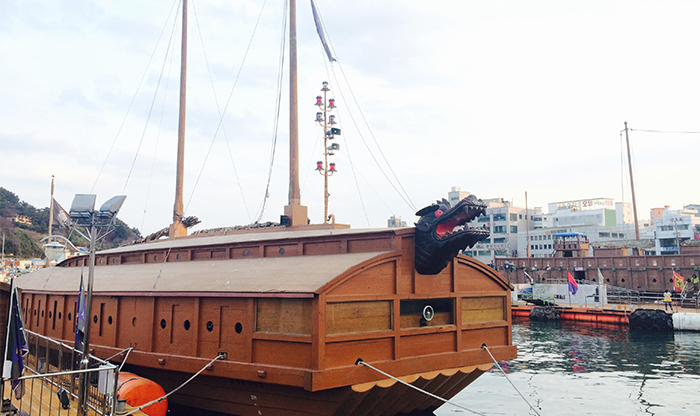 The infamous turtle ship used by Admiral Yi Sun Shin during the Imjin War dates back to the late 16th century.
Located nearby is a creative, artistic and meaningful village called the Dongpirang Wall Painting Village and the local wet market
called the Tongyeong Live Fish Market. We ended the first day with a mouth-watering all-fish dinner. 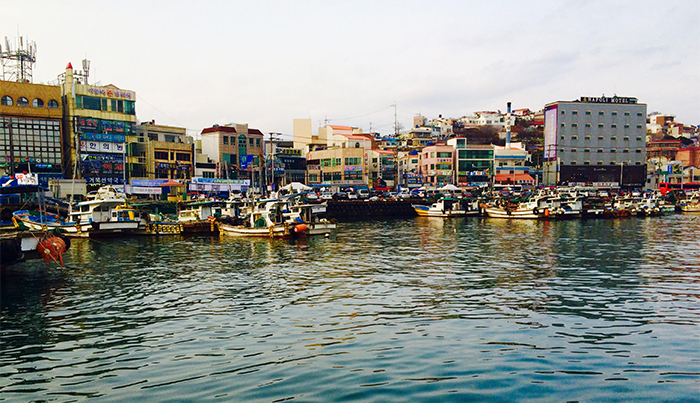 You can pick up some delicious fresh fish at the Tongyeong Live Fish Market. 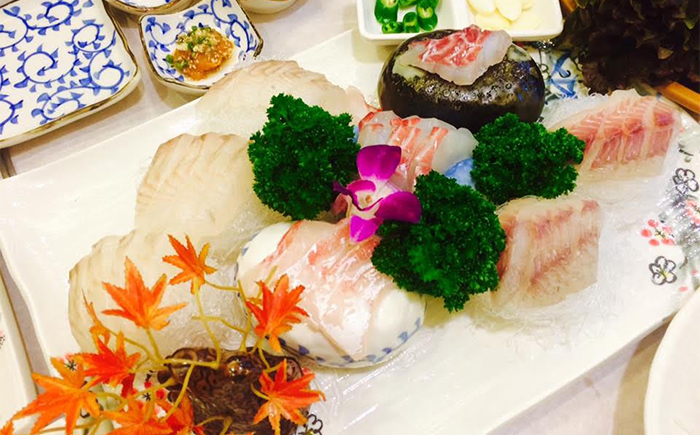 The last meal of the day is a mouth-watering all-fish dinner.

After our dinner, we then proceeded to our very relaxing and expensive-looking hotel, the Tongyeong Tourist Hotel. The hotel was really clean and all the necessary amenities were provided, so I felt so comfortable and relaxed during my overnight stay. Moreover, the old receptionist was very accommodating to us, always welcoming us with warm smiles. 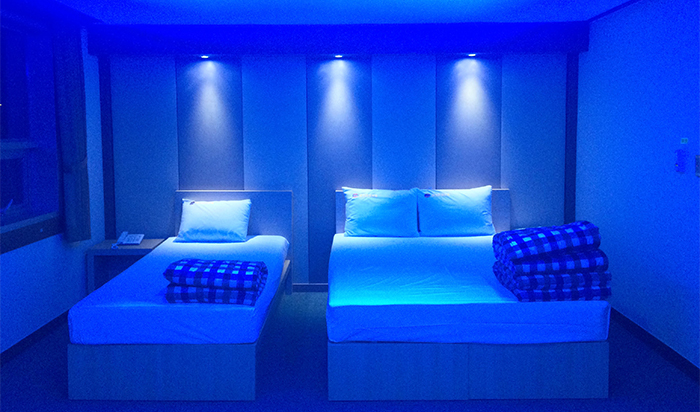 The hotel room is filled with a wide and soft bed.

The tour guide informed us in advance that the hotel restaurant was undergoing renovations, so we weren’t able to eat breakfast the normal way. Nonetheless, the packed Korea-style breakfast was sufficient.

I believe that the second day of the trip was just so memorable for all of us. We visited one of the most attractive destinations in the city, the Jangsado Sea Park. This park became popular after the much-loved TV show “My Love From the Star,” starring Kim Soo Hyun and Jun Ji Hyun, shot one episode here. 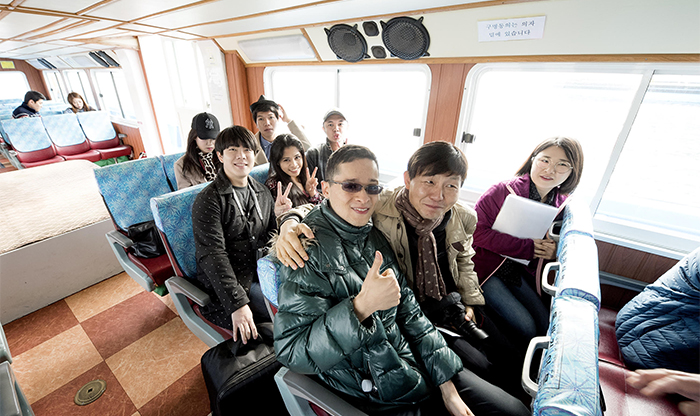 Travelers on board the K-Travel Bus and Korea.net reporters 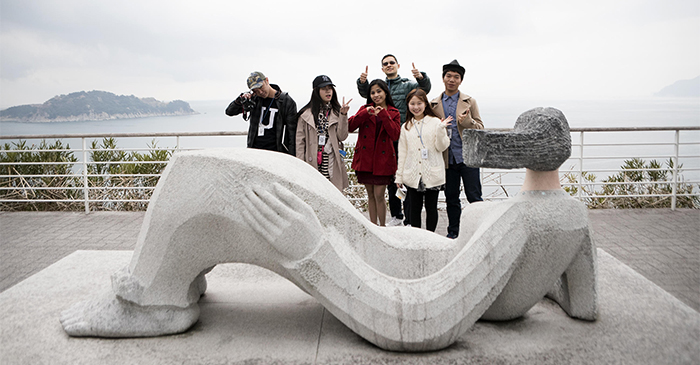 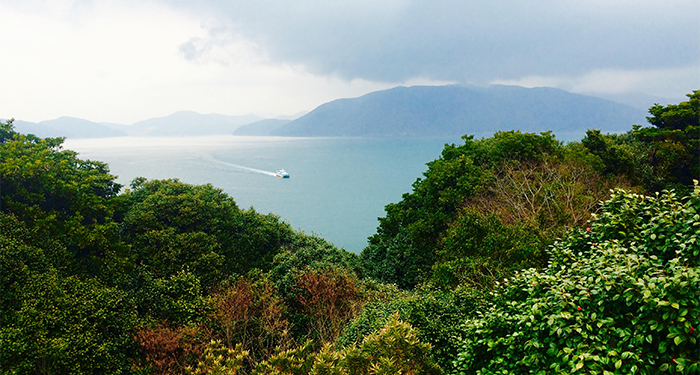 The Jangsado Sea Park has some magnificent views of the sea. 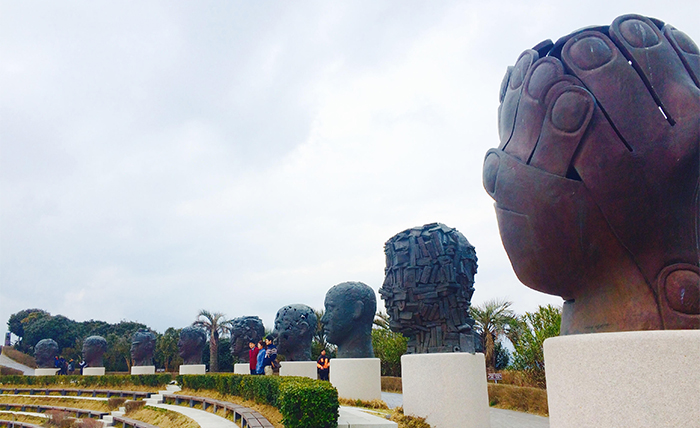 The Jangsado Sea Park also has an outdoor theater.

Overall, the K-Travel Bus trip to Tongyeong will always be an unforgettable experience for me. Not only was I able to travel to some of the most hidden wonders of the city, but also because through this wonderful program I was able to meet so many new friends that I will treasure for a lifetime. Thank you so much to the Visit Korea Committee and to the K-Travel Bus organizers for hosting this very fascinating tour of Korea.

To learn more about the K-Travel Bus and other tourist destinations, please visit its website: https://www.k-travelbus.com/en/index.html .