Ox bone soup, or seolleongtang, is a thick beef soup made using almost all the parts of an ox, from its head, bones and meat through to its intestines, and which is then boiled for a long, delicious time.

There are many theories about the origins of ox bone soup, including the name of the dish. The most commonly believed theory is that it is derived from the royal farming ceremony, the Chingyeong (친경, 親耕), that has roots going as far back as the Silla Kingdom (57 B.C.-A.D. 935).

During Joseon times (1392 – 1910), the king would perform ancestral rites at the Seonnongdan Altar, offering up rice, millet, an ox and a pig, all as sacrifices. The king then performed a ceremonial farming act with an ox. This was extremely symbolic, showing how the king wished for a good harvest that year as he prayed to Heaven and Earth. After performing the rite, everyone who participated in the ceremony shared in the soup made from the sacrificed ox. The soup they ate together became today’s ox bone soup. 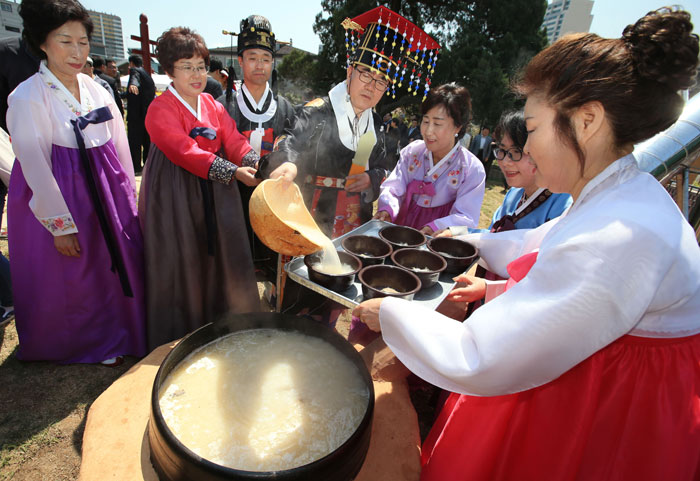 Joseon kings used to perform ancestral rites at the Seonnongdan Altar, conducting ceremonial farming activities and praying for a good harvest. After performing the rites, all participants would enjoy the soup made from the ox that had been offered as a sacrifice during the rite. The soup they ate together has since transformed into today’s ox bone soup. In the above photo, people reenact the rite at the Seonnongdan Altar, located in Jegi-dong, Seoul, and share the soup together. 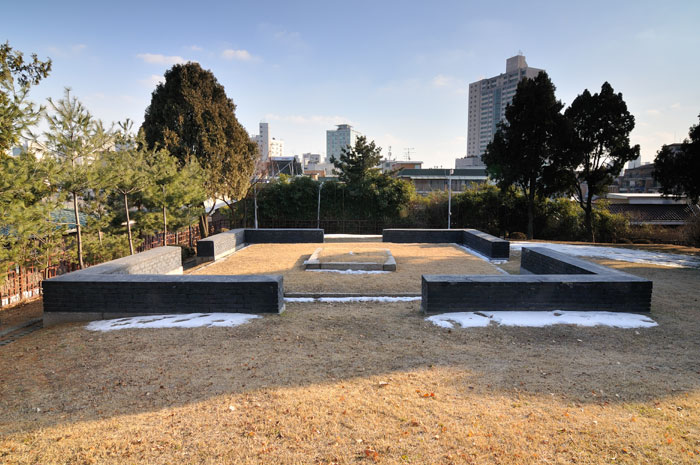 The Seonnongdan Altar is located in Jegi-dong, in Dongdaemun-gu District, Seoul. At the altar, the king performed ancestral rites and ceremonial farming acts in order to show the importance of agriculture to the nation.

Seolleongtang is made from ox bone and beef cuts, including gristle, tongue, knee cartilage and brisket. All these cuts need to be boiled for about ten hours. By doing so, a thick yet creamy broth is made. The soup is served with rice. Some people add salt, chili peppers or green onions, according to taste. The dish is best enjoyed during the winter, as it is full of protein that helps people recover from disease and boosts the immune system. It is also high in calcium that hardens the bones and helps to prevent osteoporosis.

Green onions, another one of the ingredients, removes any beef smell. It contains allyl that reduces nervousness, eases headaches and prevents people from catching a cold. It also helps urine and feces to pass. Green onions contain a lot of vitamin A in the green part and vitamin C in the white part. They also contain allyl sulphide that creates a unique smell. When absorbed into the body, allyl sulphide boosts one’s metabolism by stimulating autonomic nerves, and suppresses the proliferation of diphtheria, tuberculosis, dysentery bacillus and staphylococcus. 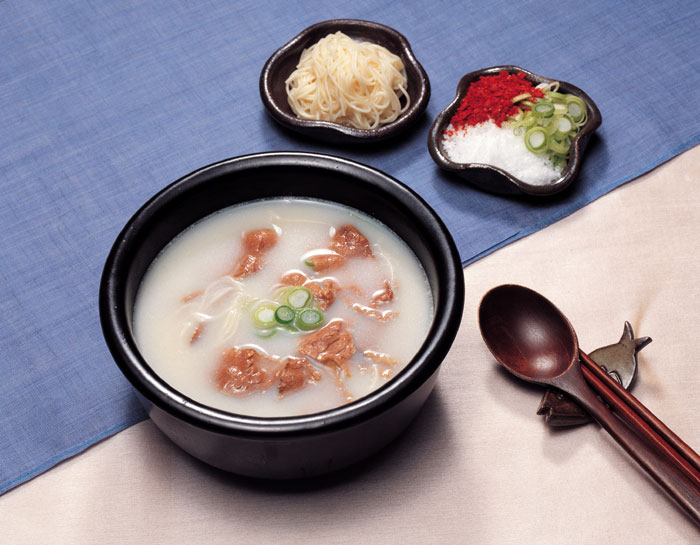 Seolleongtang, or ox bone soup, is best enjoyed during the winter as it is high in calcium and protein. 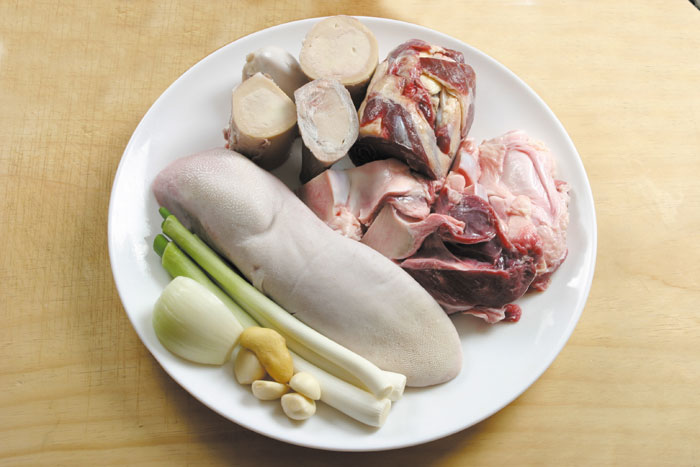 The main ingredients in seolleongtang are ox bone, various beef cuts including gristle, tongue, knee cartilage and brisket, and then green onions, garlic, ginger and onions.

** Preparation:
1. Wash and clean the knee bone, gristle and tongue. Soak in water for 5-6 hours to draw out the blood.
2. Wipe away the blood on the brisket and shank with a cotton cloth. Wash the seasoning thoroughly.
3. Trim and prepare the vegetables for the seasoning. Finely chop the green onion.

** Instructions:
1. Pour water into a pot and heat it up for 10 minutes over a high heat. When it boils, add the knee bone, gristle and tongue and boil for 5 minutes for “precleaning.” Then discard the water.
2. Put the water, knee bone and gristle into the pot. Boil it for 1 hour over high heat. Lower the heat to medium and simmer it for 5 hours while skimming away the foam and fat that forms on the surface. Add the tongue, brisket and shank to the pot. Boil for 1 hour. Add the seasoning. Boil for another hour. Then boil it all over low heat for another 30 minutes.
3. When the tongue and the other cuts of beef are well-done, take them out of the broth. Cut them all into cubes about 3 centimeters by 4 centimeters. Cool the broth and skim off the fat. Boil again for 10 minutes over high heat.
4. Place the cut beef in a bowl. Pour over the broth and serve with the seasoning. 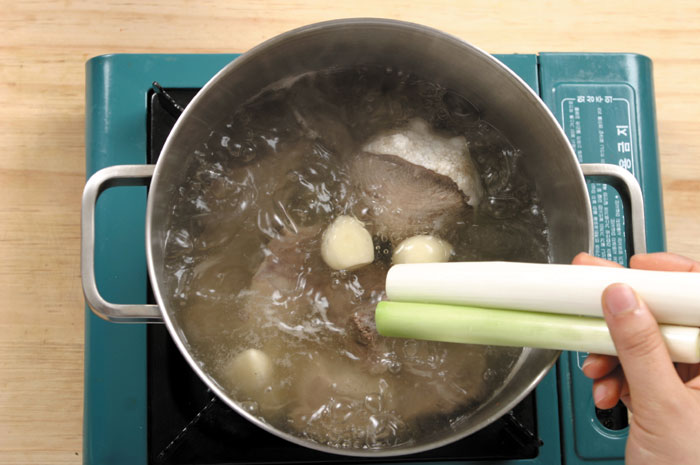 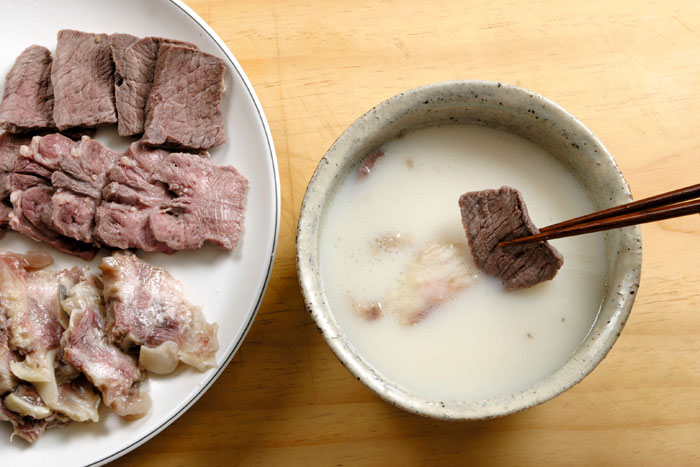 When ox tongue and the beef cuts are well-done, take them out of the broth and cut them into bite-sized pieces. Place the beef slices in a bowl with the broth and serve with seasoning.