The delicious world of Korean cuisine is broad and deep. From the vegetable dishes of kimchi, through the variety of soybean and soybean paste soups, Korean cuisine encompasses the expansive geography and habitats native to the Korean Peninsula. Korean cuisine is also the result of Korea’s millennia-long history.

Though Korean cuisine is broadly based on rice and vegetables, a significant portion of modern Korean cuisine includes seafood and meat: specifically, grilled meat. The evening streets of Seoul aren’t complete without a range of eateries serving up some variety of fried short ribs, beef tongue, brisket, spicy pork collar or pork belly on individual tabletop gas-fired grills. At higher-end meat joints, the staff both cooks and serves the meal at your table. Normally, however, the diners themselves are in charge of cooking. This takes some manual dexterity: eaters have to add, arrange, cut, flip and pull their pieces of grilled beef or pork at just the right time, without burning their fingers or dropping drips onto the table. Dinner becomes an active, physical social event, loud with clangs and clinks, as friends gather together to cook, chat, eat and drink until their bellies are full. 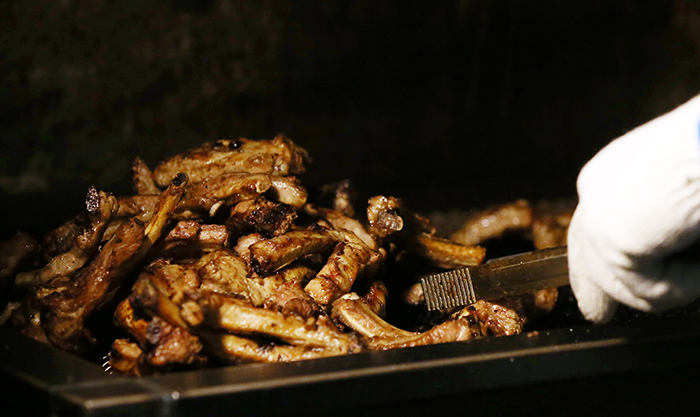 Pork ribs are smoked before being cooked and served at the diners’ individual tables.

The pork served here tends to be well-marbled and flavorful, though that, of course, depends on the restaurant. There are two broad varieties of Korean grilled beef and pork ribs: galbi and bulgogi. Galbi is spiral-sliced bone-in pork short ribs. Bulgogi is stacks of thinly sliced beef sirloin. Both are normally marinated in the chef’s own dark, sugary, garlic and soy sauce sticky sauce, sometimes spicy, sometimes not, though ribs can be ordered with no sauce at all. The most delicious of all these cuts is grilled back short-ribs, or deunggalbi in Korean.

As we eat our way across Korea, there are many, many grilled meat restaurants from which to choose. Beginning in Seoul, Korea.net has selected one in particular that specializes in pork short-ribs, either marinated or not. 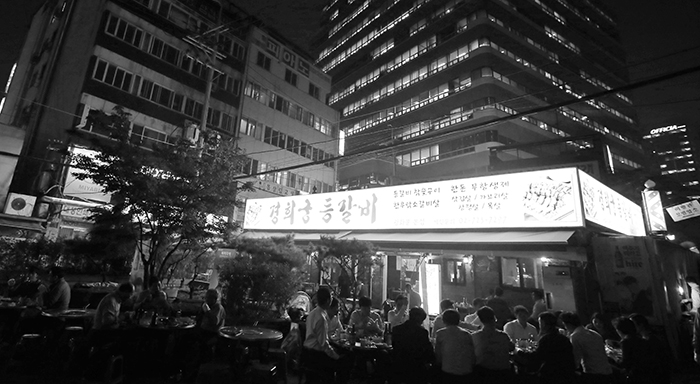 Gyeonghuigung is one of the many delicious rib joints in Seoul, located behind the Sejong Center for the Performing Arts. 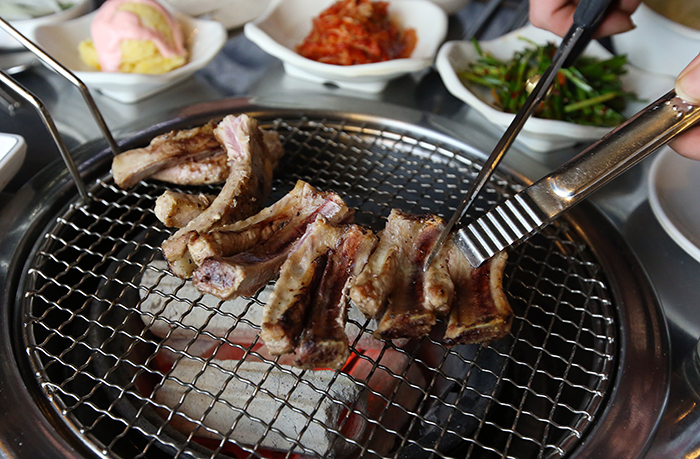 The restaurant is named Gyeonghuigung and it’s located behind the Sejong Center for the Performing Arts in downtown Seoul. Its address is Seoul, Chongno-gu District, Saemoonan-ro Street, alley No. 5, 3-9 (tel: 02-723-7297).

The staff at Gyeonghuigung bring out racks of short-ribs, either marinated or not, that have been pre-sliced halfway with a pair of industrial kitchen shears. Both staff and diners can participate in the cooking, using the scissors provided to slice off individual ribs from the rack and placing them over the burning cylindrical wood charcoal briquette. Diners don one thin cotton glove, normally on the non-dominant hand, to protect against the heat and on top of it a second, thin vinyl glove to protect against the grease and sauce. As the on-bone pork ribs have already been sheared, only a centimeter or so remains connecting the meat to the bone, allowing it to be torn asunder with mere chopstick pressure.

Let grilled back short-ribs, or deunggalbi, be your introduction to Korean cuisine, and it’s doubtful you’ll ever want to eat anything else. 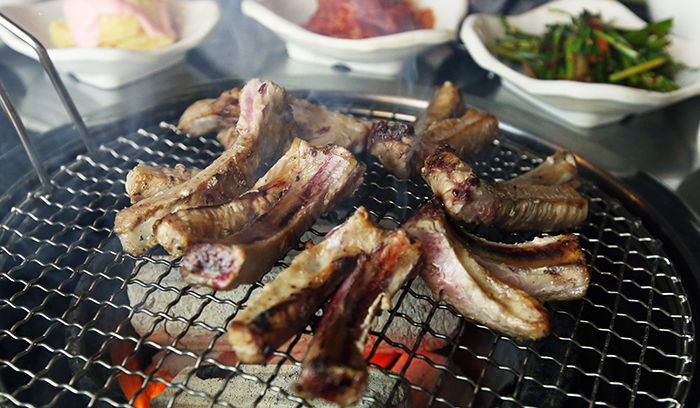 Both pork and beef ribs are a staple of Korean cuisine and can be enjoyed all year round. 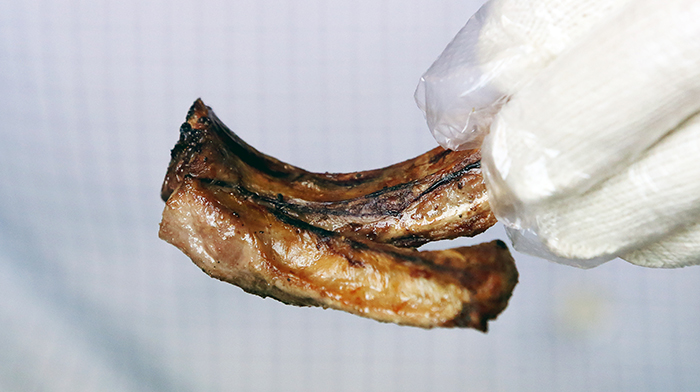 At Gyeong Hui Goong, the meat is almost entirely separated from the bone during the smoking process, allowing the diner to enjoy it with only chopsticks. 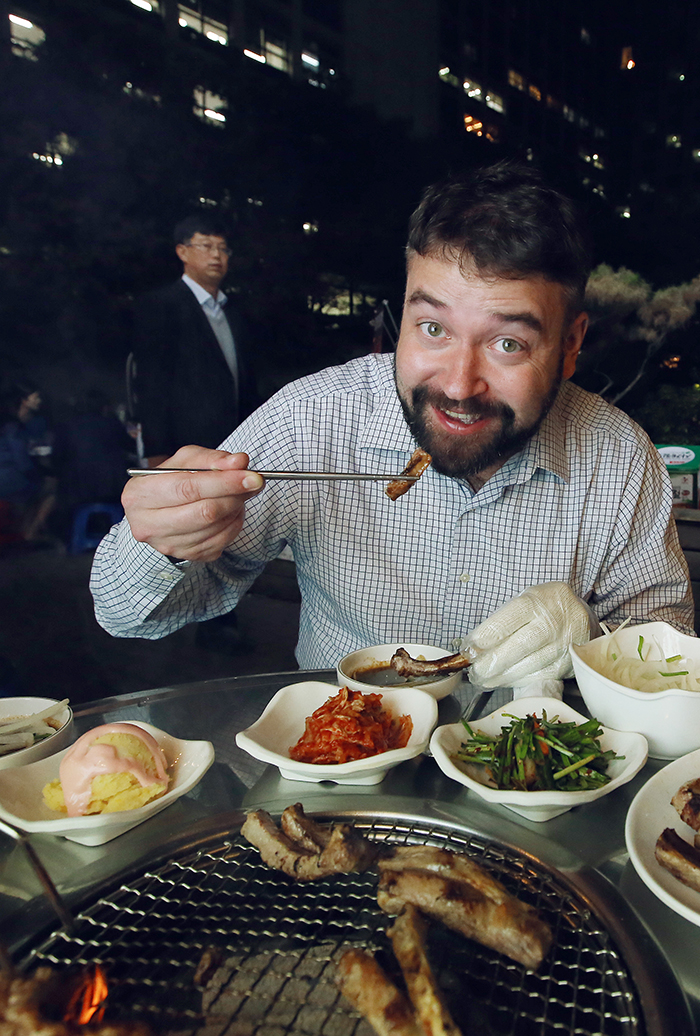 Pork ribs can be enjoyed by anyone.