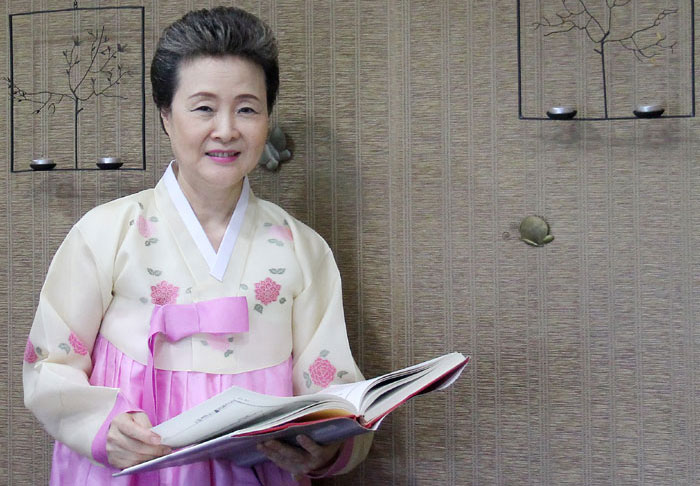 ‘Korean food is good for your health, and knowledge of this is spreading around the globe,” says Director Yoon Sook-ja of the Institute of Traditional Korean Food.

Director Yoon Sook-ja of the Institute of Traditional Korean Food explains that there is a good reason that Korean food is receiving recognition around the world.

“In the past, Chinese and Japanese food was popular. However, recently the world has begun eyeing Korean food. This is because of the widespread understanding that Korean cuisine is good for your health.” 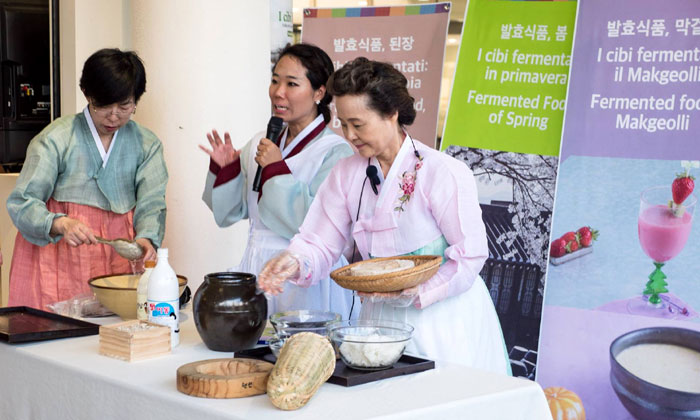 Director Yoon Sook-ja (right) of the Institute of Traditional Korean Food demonstrates how to make traditional liquor through fermentation at the Korea Pavilion at Expo Milano 2015 in August.

Yoon is at the forefront of promoting Korean food overseas as she travels around the world. Within this year alone, she has traveled overseas about 20 times.

Last month, she went to the Korea Pavilion at Expo Milano 2015 and talked about various fermented Korean foods using seven or eight kinds of kimchi and a variety of fermented soy bean pastes as examples and samples. Yoon also showcased how to make traditional Korean rice beer through fermentation. At the expo, she added kimchi to various foods from around the world, such as pasta, escargots, tacos and okonomiyaki, and received favorable responses from visitors.

The key to tasty Korean food is the seasoning and condiments made from fermented soy bean paste, she says. According to Yoon, the word “seasoning” in Korean, “yangnyeom” (양념), is derived from the word “yaknyeom” (藥念), which means, “people use seasoning in a belief that it’s medicinal.” She further explains that the secret that makes Korean food special is that the seasonings have mild flavors and enhance the tastes of the main ingredients.

“Last month, I taught a Korean food class for professors in the tourism department at a university in Hanoi and at one in Yanbian, China. Also, well-known chefs from five countries, including Vietnam and Indonesia, will visit Korea next month to learn more about Korean cuisine,” said Yoon, predicting that the popularity of Korean food will stretch long into the future.

Korea.net sat down with Yoon to learn more about the popularity of Korean food around the world and about her activities to promote Korean food outside of Korea. 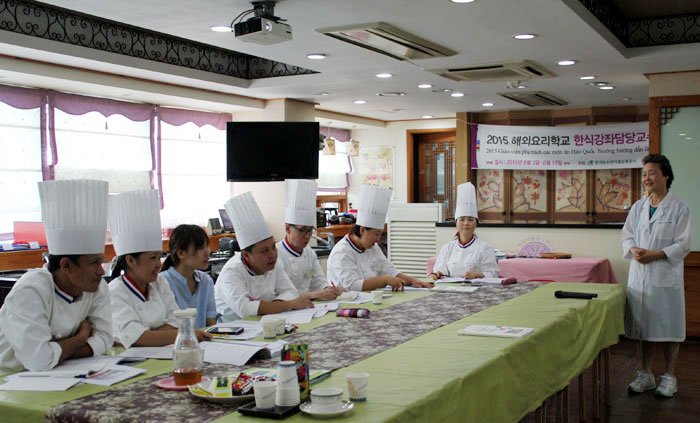 Instructors from the tourism department at a university in Hanoi listen to a lecture from Director Yoon Sook-ja (right). They are participants in an invitational educational program for professors who will teach Korean cuisine to their students in Vietnam later this year. The program was held from Aug. 3 to 19 at the Institute of Traditional Korean Food.

– Why do you think the world is paying particular attention to Korean food these days?
The reason why non-Koreans like Korean food is because it’s not greasy, it’s made with seasonal, natural ingredients and it includes a variety of fermented foods. Korean food’s combination of five colors — green, red, yellow, white and black — is also pleasing to the eye. Korean cuisine is good for your health, as it’s prepared in the belief that the “roots of medicine and food are the same” (藥食同源), as the saying goes. So in this respect, people all over the world value Korean food, which helped it to rise in popularity over the past five or six years or so.

– You recently taught a group of professors who will teach Korean cuisine at universities in Hanoi and in Yanbian, China. You will also open an institute in Los Angeles next year that will teach Korean cooking. In some countries, it may not be easy to find Korean ingredients. Also, some people prefer particular flavors. Do you have any strategies to promote Korean cuisine in certain countries or regions?
When this happens, I replace the traditional ingredients with ingredients from that country. For example, when cooking stir-fried glass noodles and vegetables, or japchae, I replace the cucumber, if I can’t find it, with spinach. Despite the change, it won’t be totally different.

In the case of grilled short rib meat patties, or tteokgalbi, the traditional cooking method is to stick the marinated meat with the bones on a grill. If I cannot find bones, however, I use mushrooms or asparagus instead. Though I use different ingredients, it will still taste the same as I use the same seasoning.

In the case of many Chinese people, I consider their preference for seafood and add seafood to the glass noodles instead of beef. For Japanese people, I know they prefer the taste of burdock, and so for them I put in some sliced burdock and stir fry it with the other ingredients. As each country has slightly different tastes and preferences, I take that in mind and reflect it in my cooking, which always brings out a good response. To do this, however, I need to do a lot of research. Whenever I go overseas, I head to a traditional market or standard grocery store to learn about local ingredients in the country. 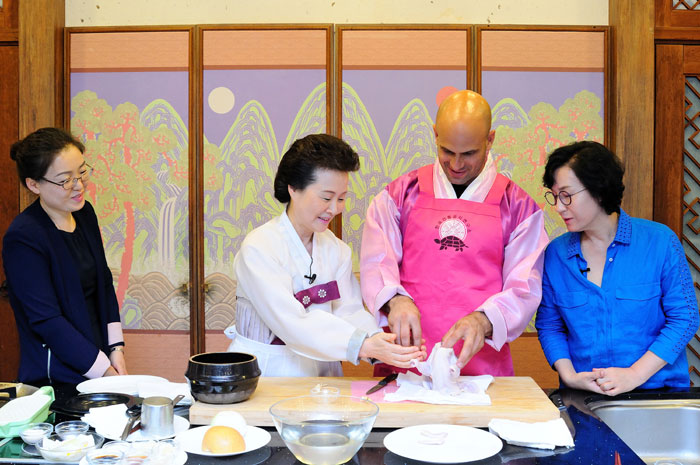 – Last year, White House Chef Sam Kass visited Korea to learn how to cook Korean food from you. How did he get to know about Korean food and about you in particular?
I think that relationship is really meaningful. Kass came to Korea in July last year on his holiday after he received a request from President Obama who asked him to learn more about Korean cuisine. The U.S. Embassy in Korea introduced us. So I taught him how to cook Korean food, such as chicken soup with ginseng, or samgyetang, and marinated Korean beef, or bulgogi, as it was summer. As a White House chef, he was a little different. He was eager to learn and tried the varieties of fermented soy bean paste that I make. He even joked that he should go back to the White House to cook Korean food for President Obama so that he stops eating hamburgers all the time.

He followed my teaching very well. Thanks to that meeting, he said he would invite me to the White House. I thought it just a standard polite greeting, but I actually received his invitation and visited the White House. I looked around the kitchen there and met with all the staff there. I brought some handmade gifts as gifts for the visit. I even received a thank you letter from First Lady Michelle Obama for the gifts. In fact, Mr. and Mrs. Obama are really interested in Korean food.

– Can you recommend any simple Korean recipe for non-Koreans who want to cook for their family or friends?
Considering the season, I would like to recommend simmered chicken, or dakjjim, for the autumn. Autumn is a good season to eat chicken dishes as the chicks that are born in the spring have grown and gotten fat by the fall. So simmered chicken would be good for the autumn. Another recommendation would be to eat root crops, such as balloonflowers, or doraji. In the fall, roots are full of the energy and nutrition of the soil, so I recommend people eat all sorts of root crops, such as ballooonflowers, lotus roots, or yeongeun, and burdock. 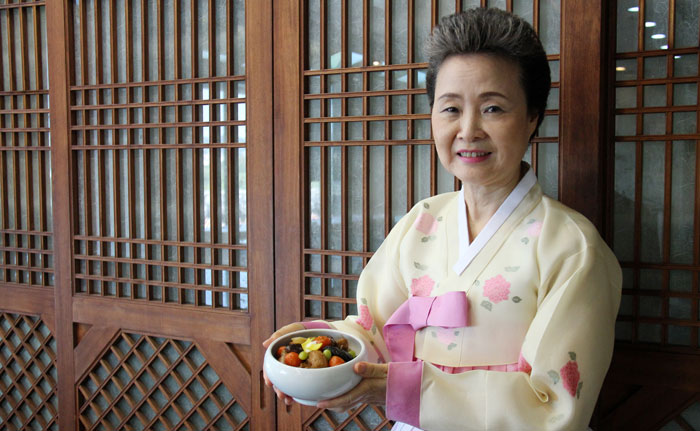 Yoon recommends simmered chicken as an ‘energy food’ for the autumn with her simple recipe. 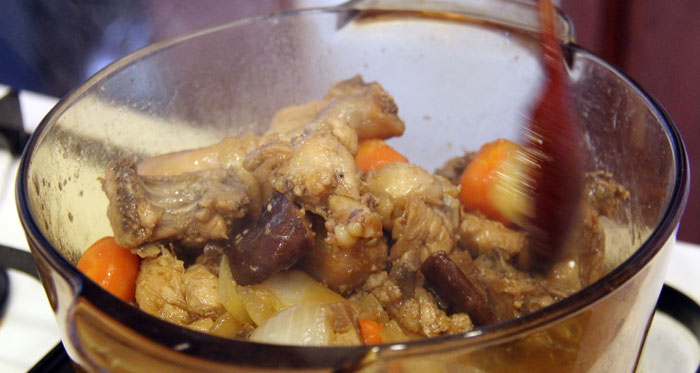 Put the trimmed chicken into the pot. Add half of the seasoning sauce and water. Boil it for 3 minutes on high. When it boils, lower the heat to medium and slowly simmer for 20 minutes. 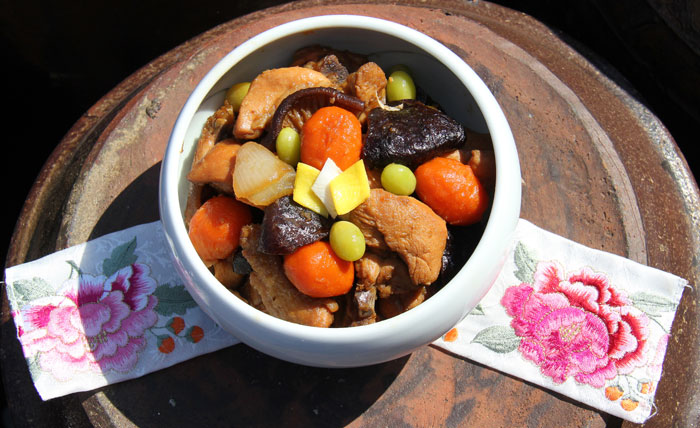 Simmered Chicken is made from pieces of chicken simmered with seasoning along with various vegetables, such as onions, carrots and mushrooms. This dish is known to protect one’s ‘energy’ and to enhance physical strength. It is especially good in the autumn.