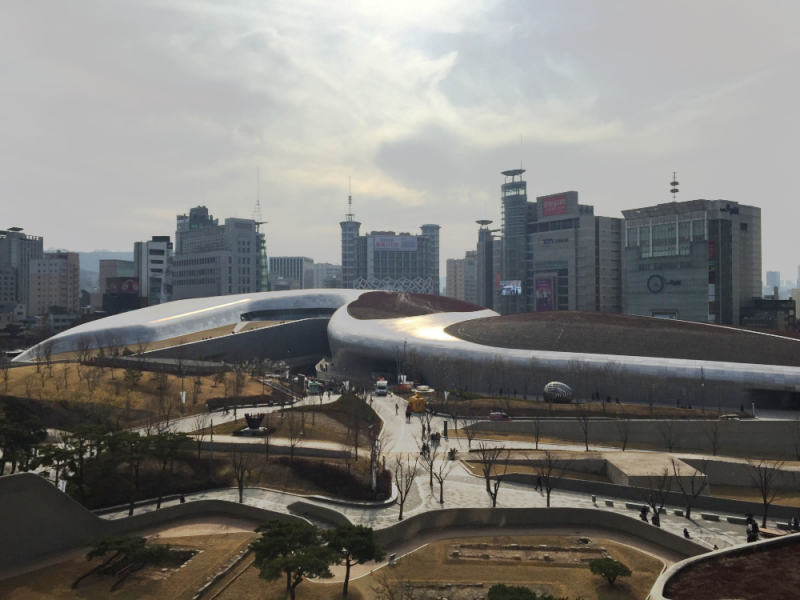 Dongdaemun-gu is well-known as a landmark of South Korea’s fashion hub and popular tourist destination. DDP had constructed two years ago in Dongdaemun-gu and has been becoming one of a cultural center in Seoul.

DDP Structure, designed by ‘Zaha Hadid’, reminds of huge U.F.O. You might not be able to find any right angle and straight line in this architecture. It’s harmonized by walls and celling in a curved surface. That incorporates Korean traditional architecture that reminiscent of flowing water, the structure embracing the spatial flexibility of the park. That is the most meaningful in DDP.

The picture at the top of the page, you can see the Green roof. Many kinds of plants are planted. Seoul achieved building the environmental architecture. DDP functions as forest in the urban spaces.

Take back our history 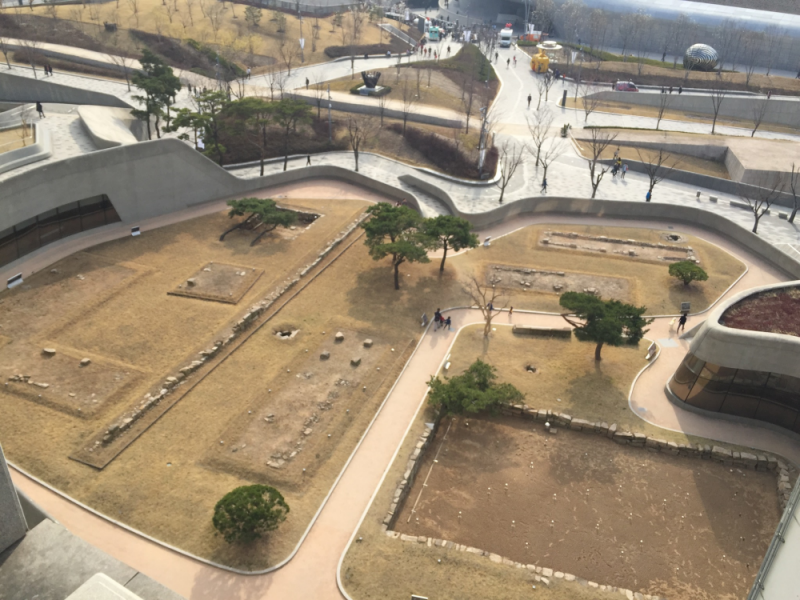 One more special thing in DDP is an outdoor exhibition of a relic, discovered during under construction DDP. Before building DDP, This place was originally ‘Dongdaemun stadium’ that was built in 1926 and was the largest athletic stadium in Korean, so in the stadium we have many kinds of history. Nevertheless, the reason why the stadium was demolished was tragic and painful history. When the stadium started to build, the purpose was the wedding for emperor of Japan ‘Hirohito’.

It was the meaningful project to take back our history by restoring castle and historical ground during construction DDP. 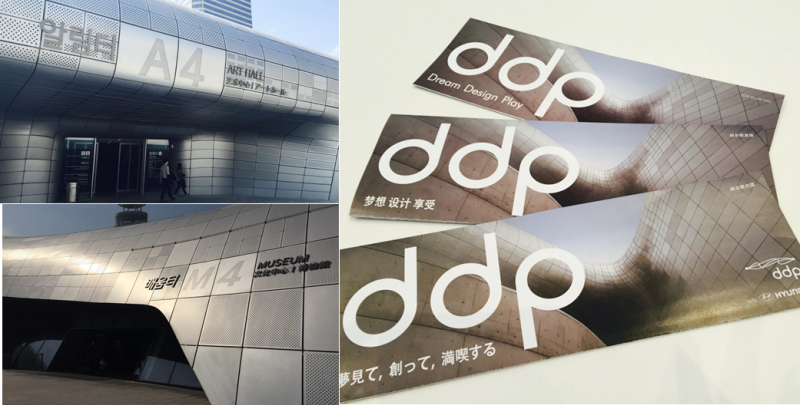 Enjoy in a Harmonic place 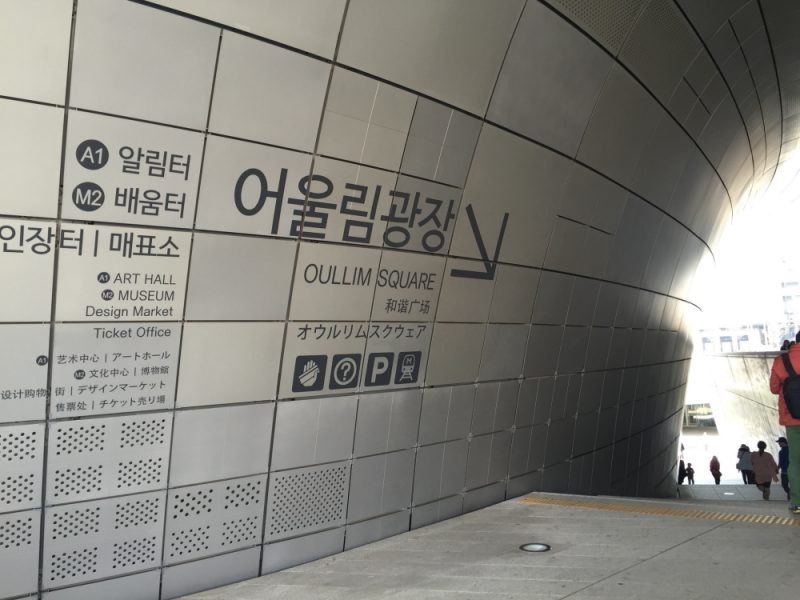 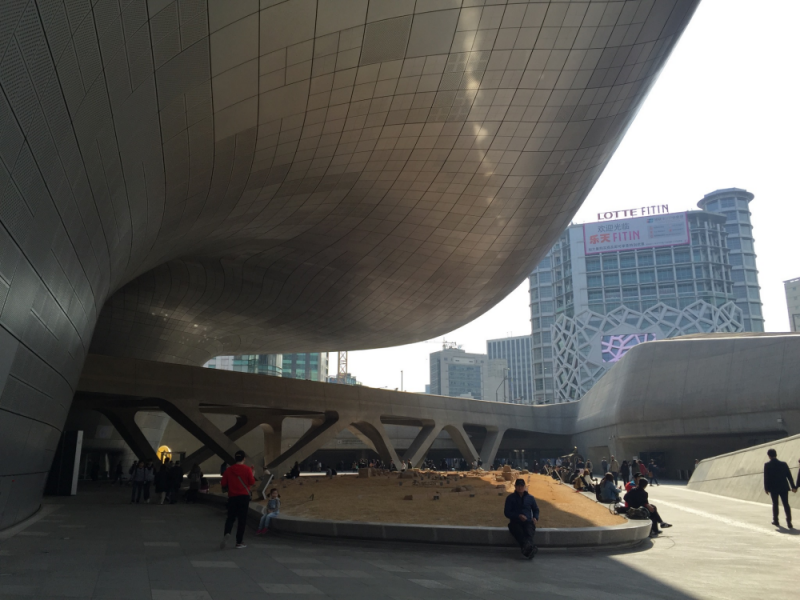 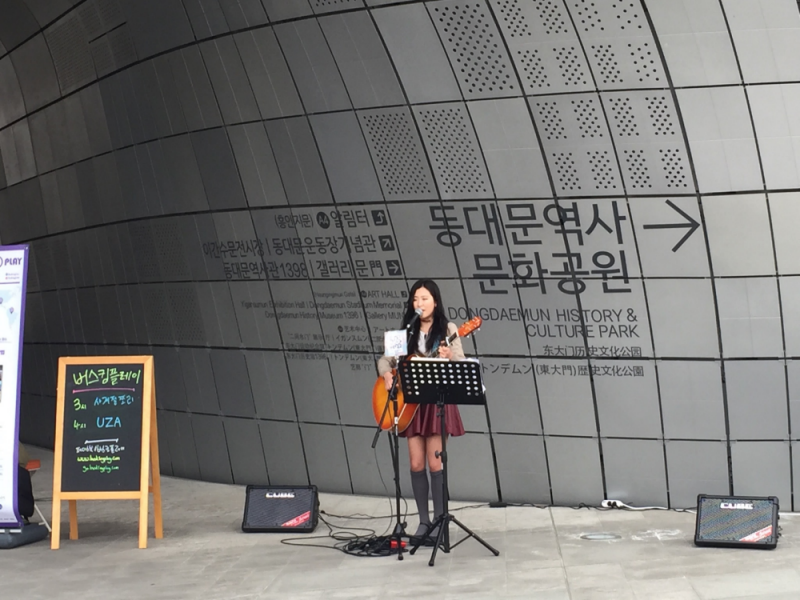 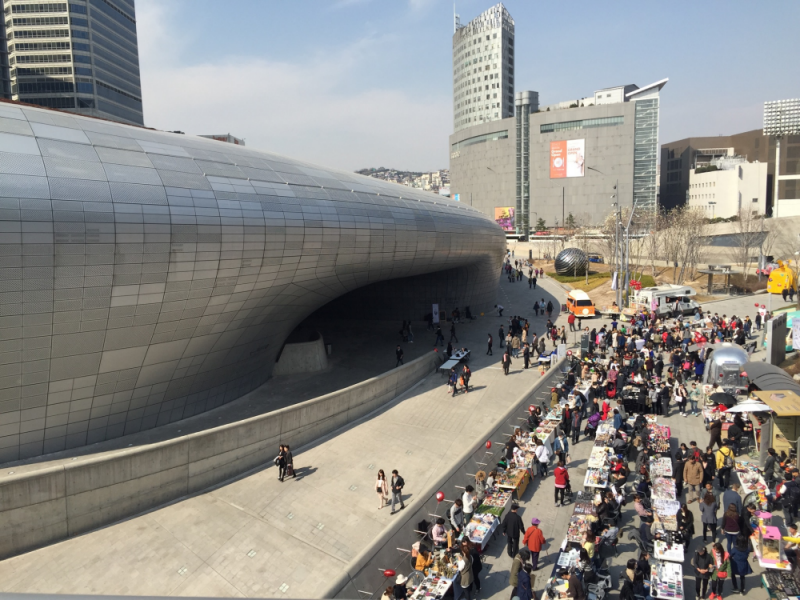 If you follow the arrows, you can go to the Oullim square. Oullim means ‘harmony’ in Korea. The square is all connected with varied space such as meeting point with subway station, resting area, street performance by musicians and market on the street. You might feel active and alive in this point.

Variety interiors just in one building 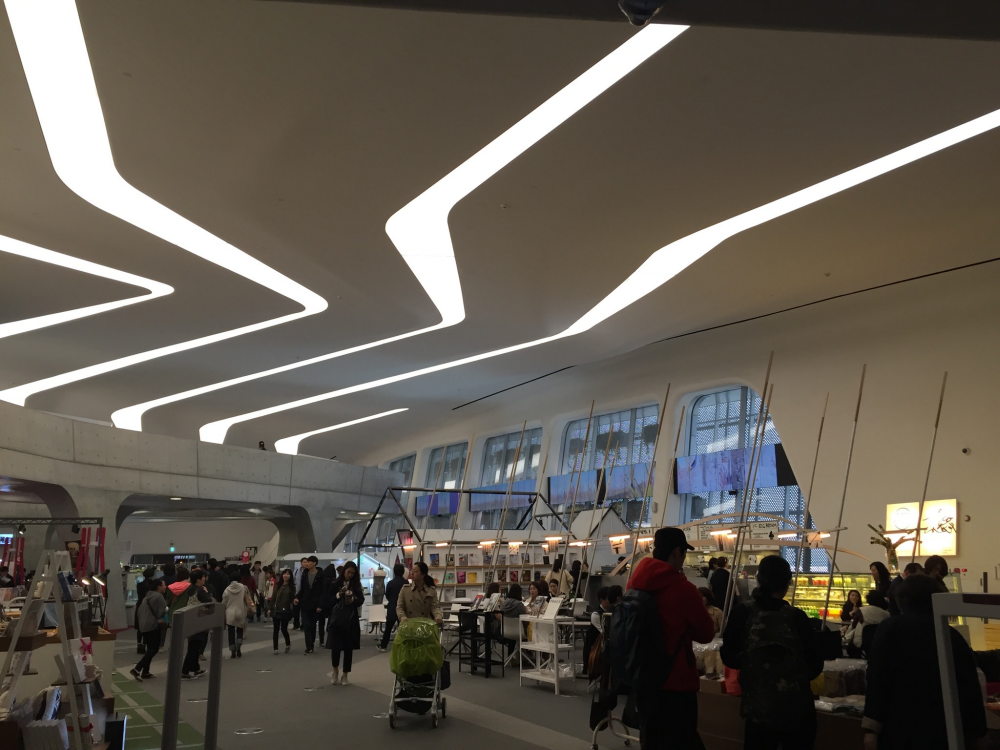 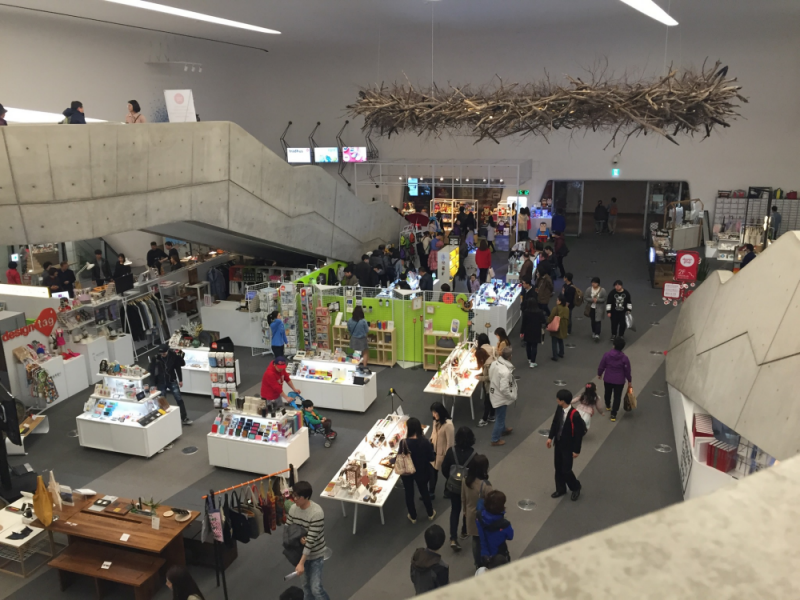 If you go inside DDP, you might feel you’re in the labyrinth. Start to walk along the ‘Design Pathway’ from the -2 floor and keep going to the end. Then you might find yourself you are on the 4th floor before you knew it. Also, if you look around DDP, you can see variety of exhibitions, shopping center and the museum. Well, everything is connected in just one building. Such an amazing structure I’ve seen ever. 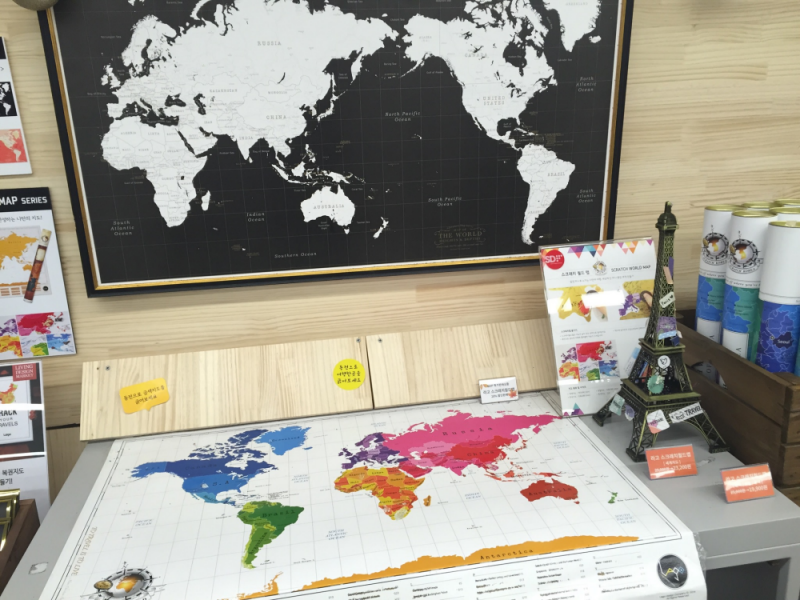 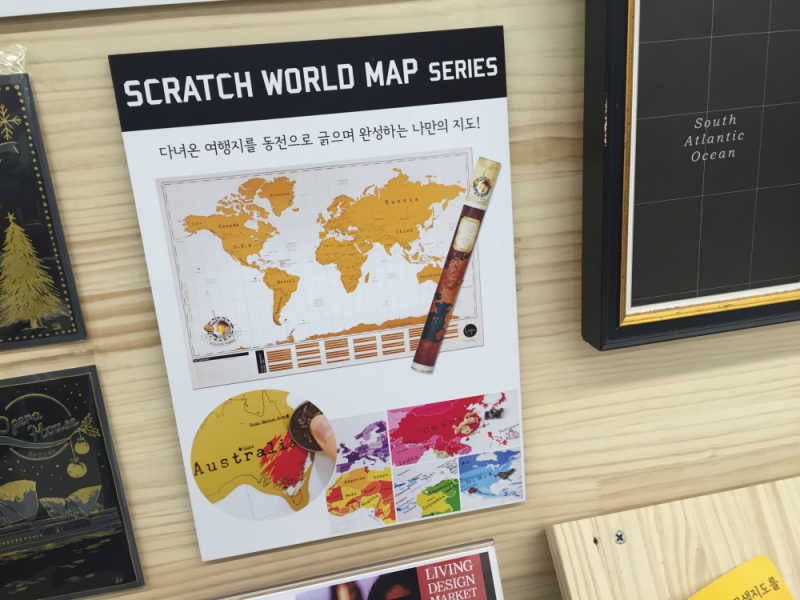 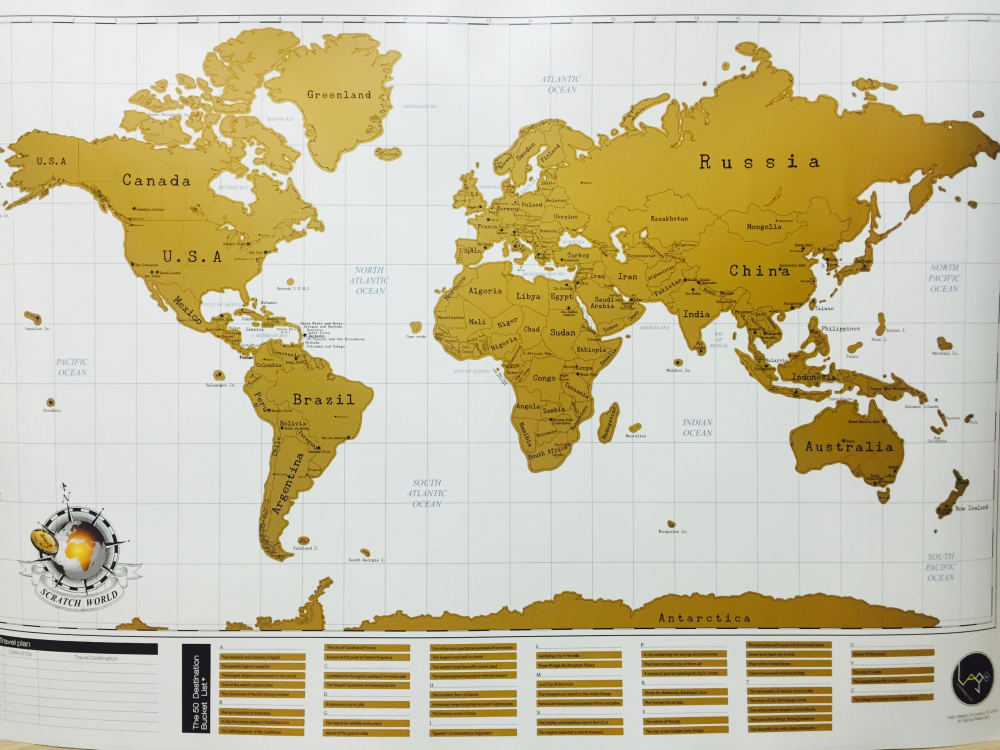 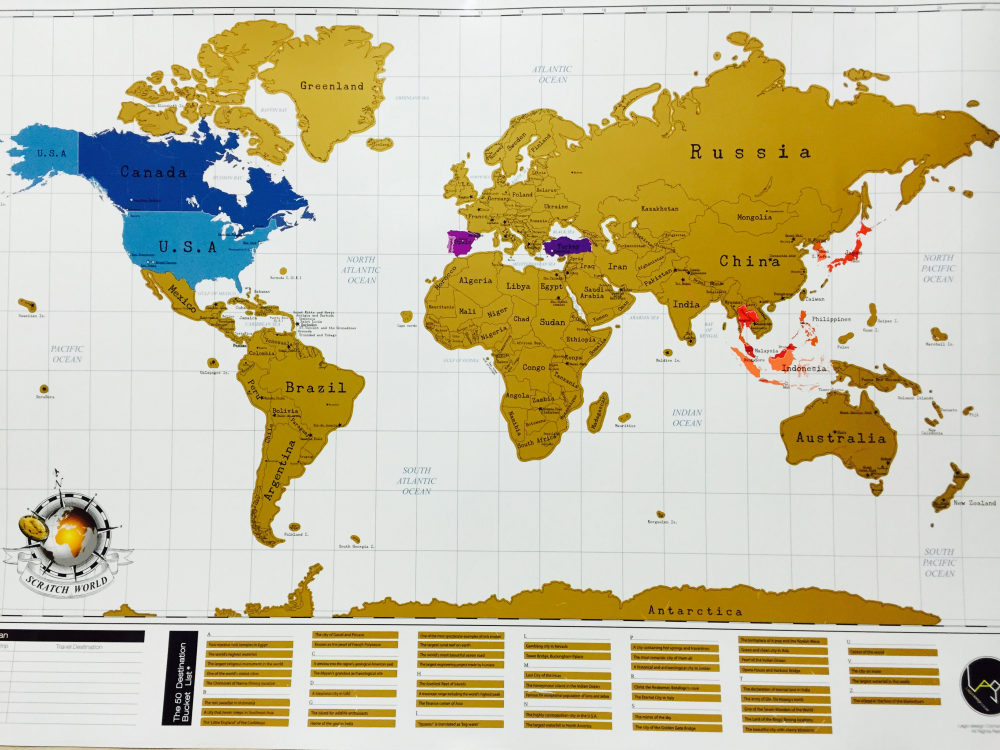 During walking around in DDP, I found an interesting one. The name is ‘Scratch World’. It’s scratching off where you’ve been. I bought this and as soon as I arrived home, I scratched where I’ve traveled using coin. I thought I’ve traveled many countries, but not. So I got a new goal in my life that is traveling all around the world and scratching all of countries.

Look around DDP. You can also find interesting and attractive items like me.

The Day and the Night @ DDP 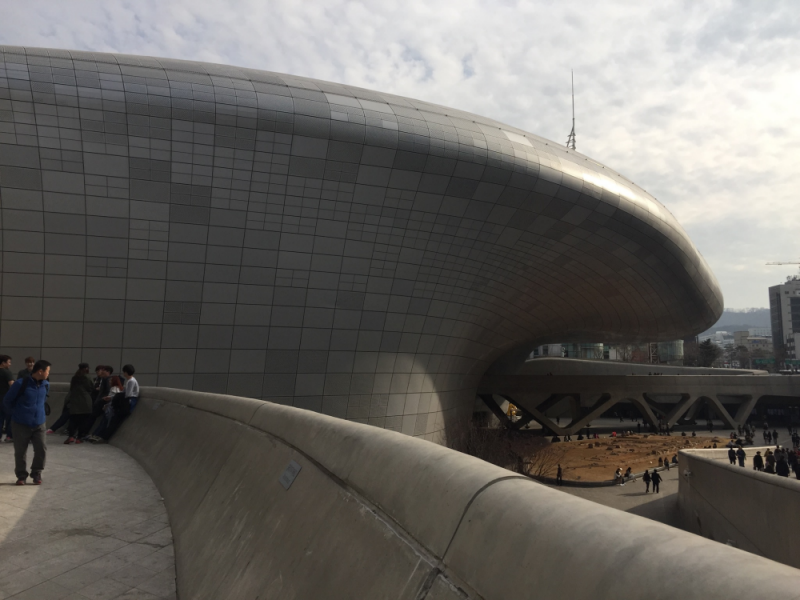 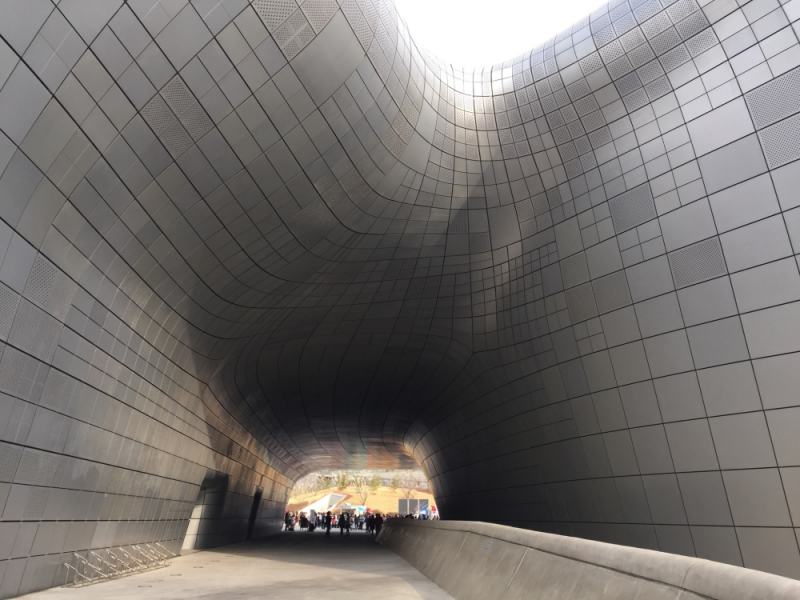 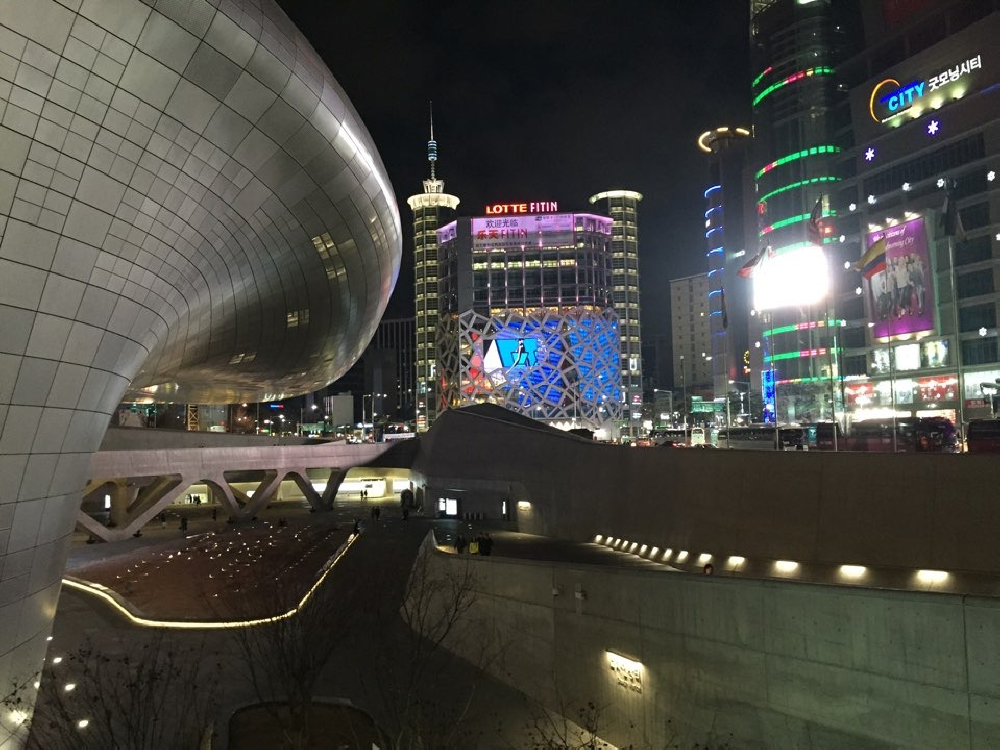 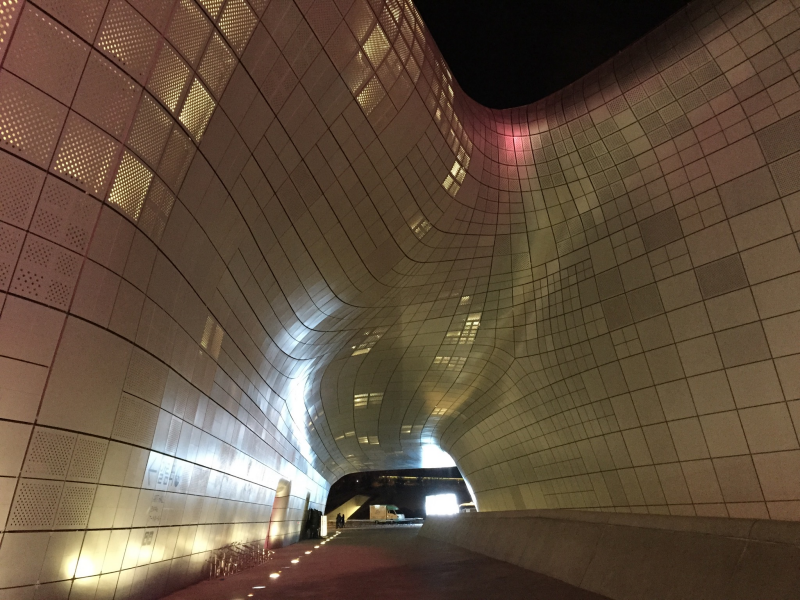 You also won’t be disappointed with the night view of DDP. When night comes, the structure emits a brilliant light. Also, with the shopping center behind DDP, they create more wonderful night scenery. If you have free time in the evening, visit here. You might feel you’re seeing a real U.F.O.

I highly recommend you to visit here DDP.

In Korean traditional structure, there is the feature that trying to embrace the nature such as the mountain, the sea, the land and the wind into one. They are not against the nature by putting the structure on earth.

DDP in Dongdaemun tried to do metonymy the traditional Korean structure and they expressed a building and park are associated with the flow of liquid.

Although DDP and Gyeongbokgung Palace look different, the thing that they tried to embrace the nature is the same. So, in my humble opinion, I hope you to visit not only Kyeong bok gung Palace, but also DDP.

One more thing, KwangJang Market, which is one of the famous traveling spot, is right next to the DDP. So, If you are starving after touring DDP, visit there. It should be a perfect tour course!

Let’s visit DDP that did metonymy the Korean traditional scenery. At the same time, it’s a good opportunity to see the night view of DDP.