A Seokjojeon hall in Deoksugung Palace, the extreme record of 14 years

Spring season has come. The weather was quite chilly until yesterday, but today spring is already in the air. Even though it’s doesn’t come into blossom now, spring will invite us a world full of flower soon.

I wonder how the palace of spring season is. Seoul must be a blessed city. Deoksugung palace is the smallest one among many palaces in Seoul, so it’s the place that office workers enjoy their lunch time.

Deoksugung palace looks smaller and unpopular than other palaces, but they are sharing our recent history, the name is ‘Korean empire period’. That’s why Deoksugung palace looks different from the other one such as ‘Gyeongbok Palace’, ‘Changduck palace’ and etc. The western style building called ‘Seokjojeon Hall (built of stone)’ reminds us of Greek temple. Let me explain about the ‘Seokjojeon Hall’ today.

The background of Deoksugung palace is ‘Korean empire period’. From the end of 19th century to early 20th century, it was the era of conquest that fighting for the colony all over the world. Many countries in Asia were sacrificed by competition of imperialism from Europe and Japan. In this period, China was no exception as well.

Pu-Yi, commonly known as henry Pu-Yi was the last emperor of China ‘Qing dynasty’. Still a child the age of three, he ruled as the Emperor, so he couldn’t exercise his own faculties. Later, he became a citizen from a son of heaven by Japan’s scheme. The movie ‘The Last Emperor’ by Bernardo Bertolucci is about the story of Pu-Yi that won seven Academy Awards. There’s one scene that soldiers order him to leave from his palace in one hour while Pu-Yi is playing tennis. The young Pu-Yi didn’t know the meaning at that time and he was just a child that was observing the collapse of the Qing Dynasty as a young citizen not a son of heaven.

Seokjojeon hall is a stone building that different from other Korean traditional wooden buildings. To understand this, you need catch all stories above. At the end of 19 century, there was no any remedy that blocking the foreign forces. Eventually, the Korea’s 26th emperor ‘Gojong’ reforms their country. It was an effort to protect Korea from the imperialist by accepting Western civilization and found a new nation again. It was the western structure ‘Seokjojeon hall’ that located in Deoksugung palace and showed a strong will to be in harmony with tradition and modernity. 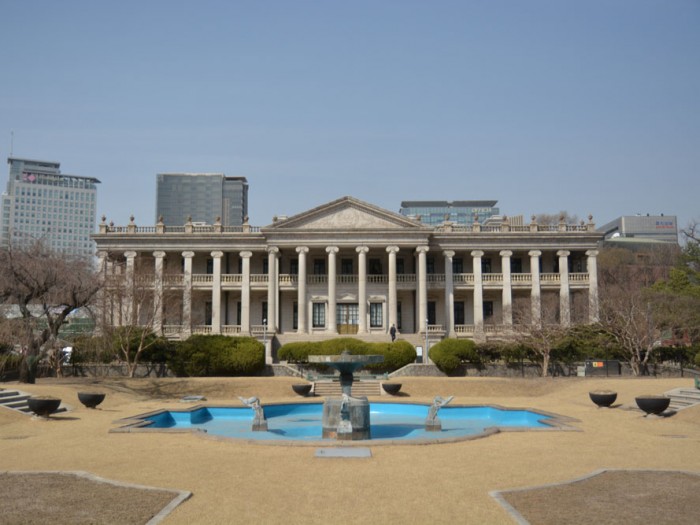 In 1910, when Seokjojeon hall had been constructed to follow the flow of the Western powers, ‘Korean empire period’ disappeared from the history by Japanese invasion. After that, it was transformed into an art gallery when Korea was under Japanese colonial rule. In 2014, that is reborn as a Korean Empire history museum to let the people know the history ‘Korean empire’.

The modern interior of royal family

Seokjojeon hall is the only place that we can see the interior of royal family. It’s the only cultural architecture from the end of 19th century to early 20th century.

You can look around the Korean Empire Museum with guide after making a reservation and you can get more information with an exact explanation in depth. At the information desk, you can get audio guide translated in English, Chinese and Japanese for free of charge. 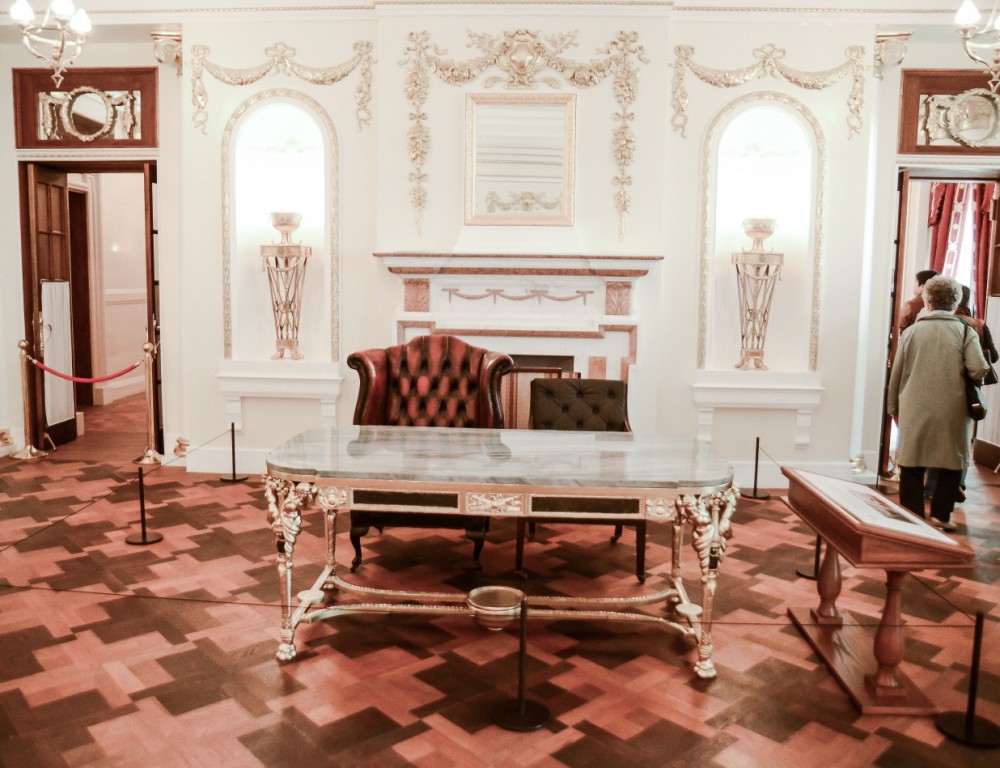 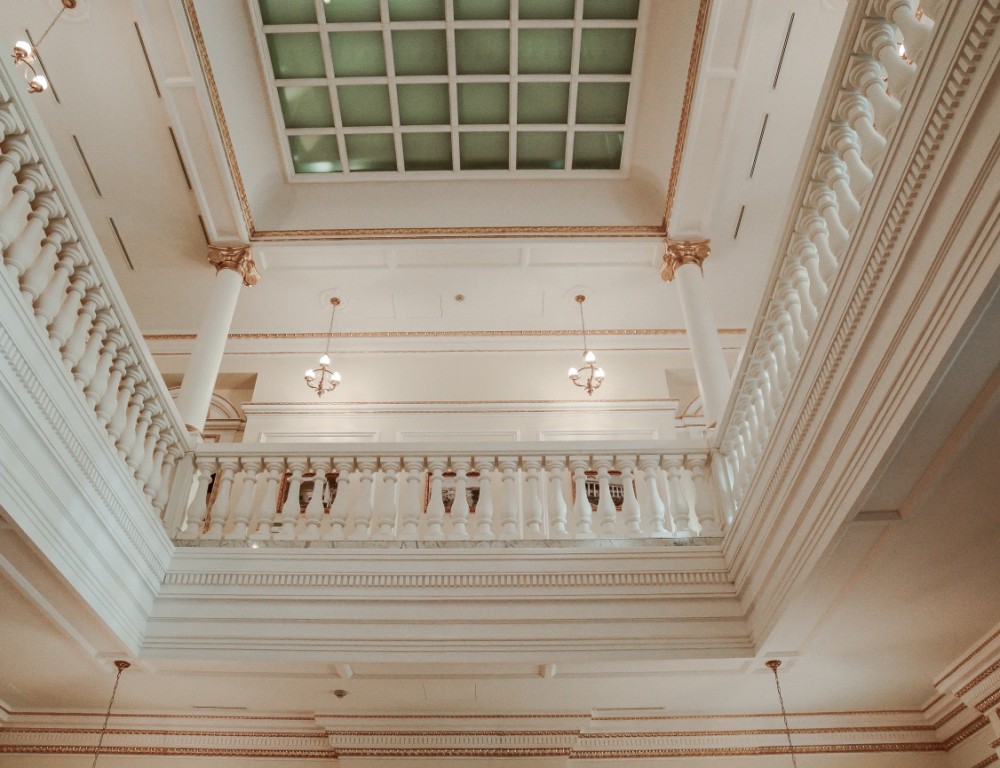 The central Lobby is the first room into which visitors are guided after they have climbed the central stairway. The hall is connected to the imperial Audience Chamber at the center of the building and the Reception Room and Dining Room are on either side.

The history that the mirror and the table show

Concentrate on the mirror at the center. The restoration of the interior of Seokjojeon Hall was basis on the mirror in old photographs taken during the 1910s. The other side of appearance reflected in the mirror was the core point of restoration. Also, the hall table of the Central Lobby is known as the most luxurious of all the original items of furniture in the palace. The Hall was restored in proportion by doing a sum based on both the mirror and the table in the picture taken in 1910. Sometimes, the historical relic is just not the relic. They give us another important lesson. 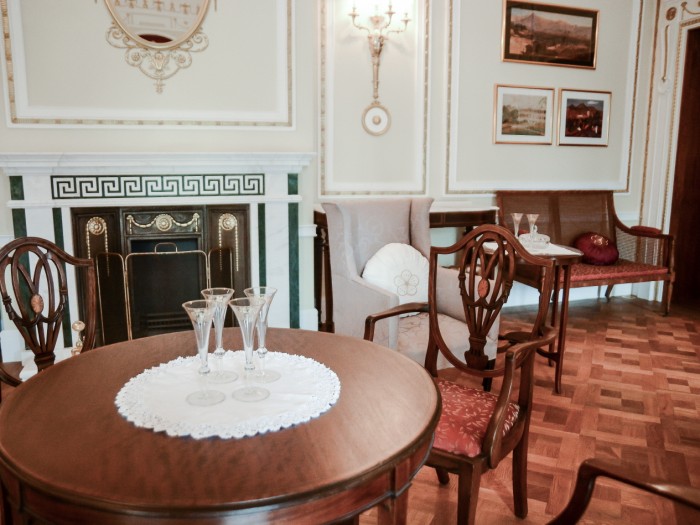 When you pass the door from the hall, you can see the Reception Room where guests would wait for their turn to have an audience with the emperor, engaging in light conversation with officials over a light, Western-style snack, such as biscuits and champagne, while they waited. So, the son of Gojong, ‘King Yeong-Chin’ would like to enjoy the time here. The interior decoration of the palace building features a neoclassical style marked by acanthus leaf moldings, ornamental columns and other architectural elements arranged in perfect symmetry.

Have an audience with the emperor, Audience chamber 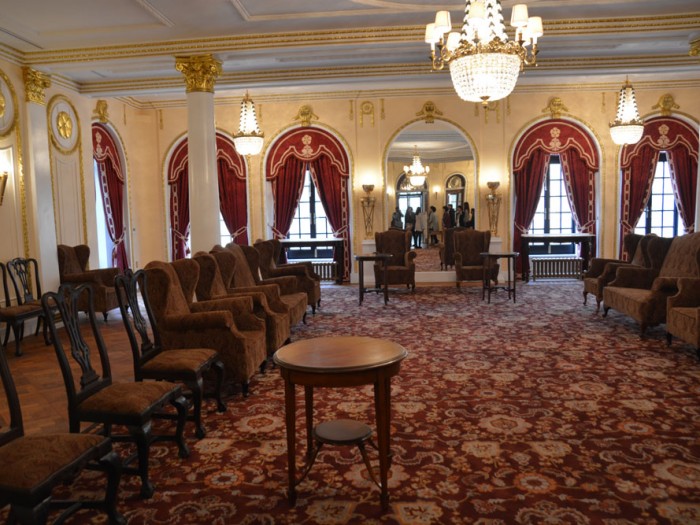 In the audience chamber that having an audience with the emperor, there are two chairs in the center of the room for an emperor and a crown prince. And the rest of the chairs are put both sides.

The person who is supposed to meet an emperor had to greeting three times. Also, when he exits, he must not show his back. Compared with the other rooms, the hall is unique in that its interior, including its furniture, is decorated with Plum blossom designs symbolizing the Korean imperial household.

The emperor’s private life, the Bedroom 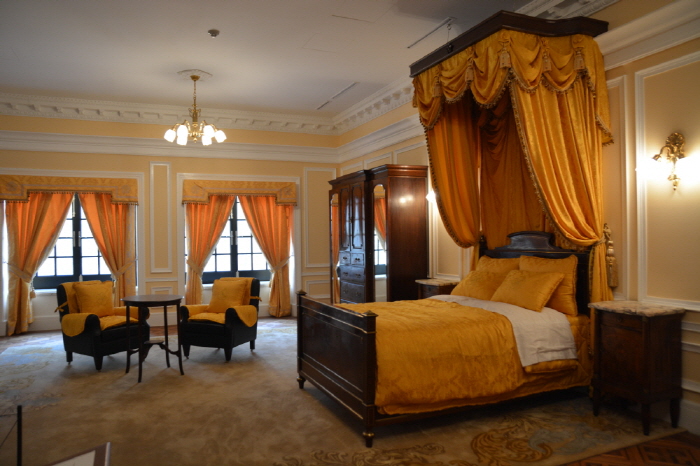 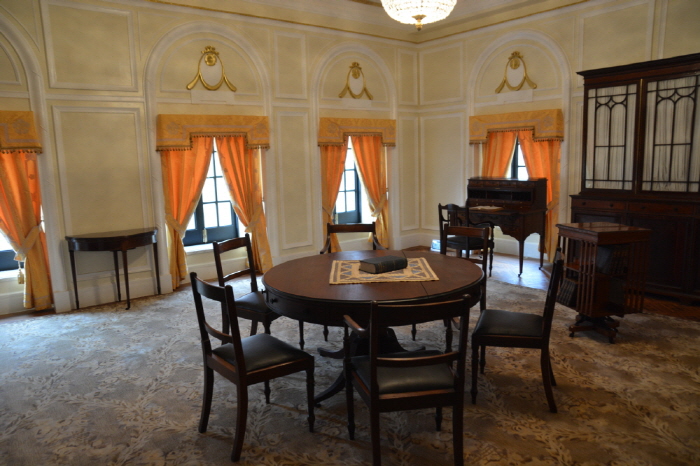 The 2nd floor of Seokjojeon hall was supposed to use as a private space. Although originally intended as the bedroom of emperor Gojong, the room was never used by Gojong. The bedroom was briefly used by King Yeong-Chin in 1911.

There was no extant photograph or textual record to give us a clear idea about the fine details of this room. The restored room contains a wardrobe and washbasin inscribed with its original inscription “EMPEROR’S BEDROOM”.

Originally intended as the bedchamber of the Honored Imperial Consort Sunheon, this room remained unused as she died in 1911, shortly after the completion of Seokjojeon Hall.

Be lost in meditation here, Terrace 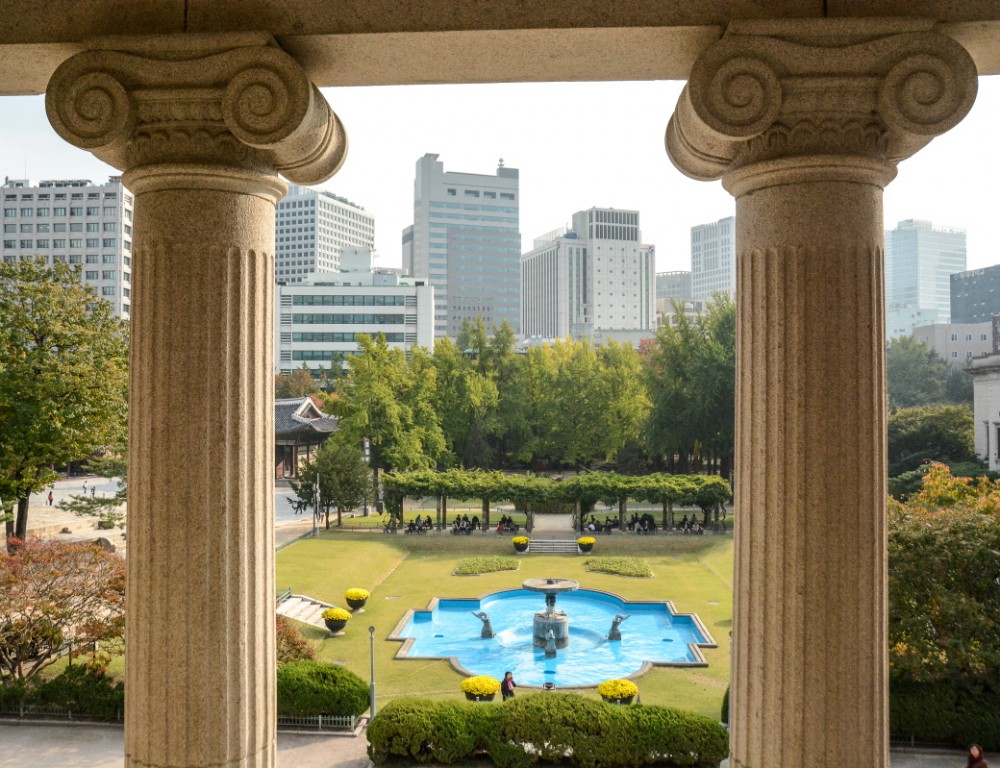 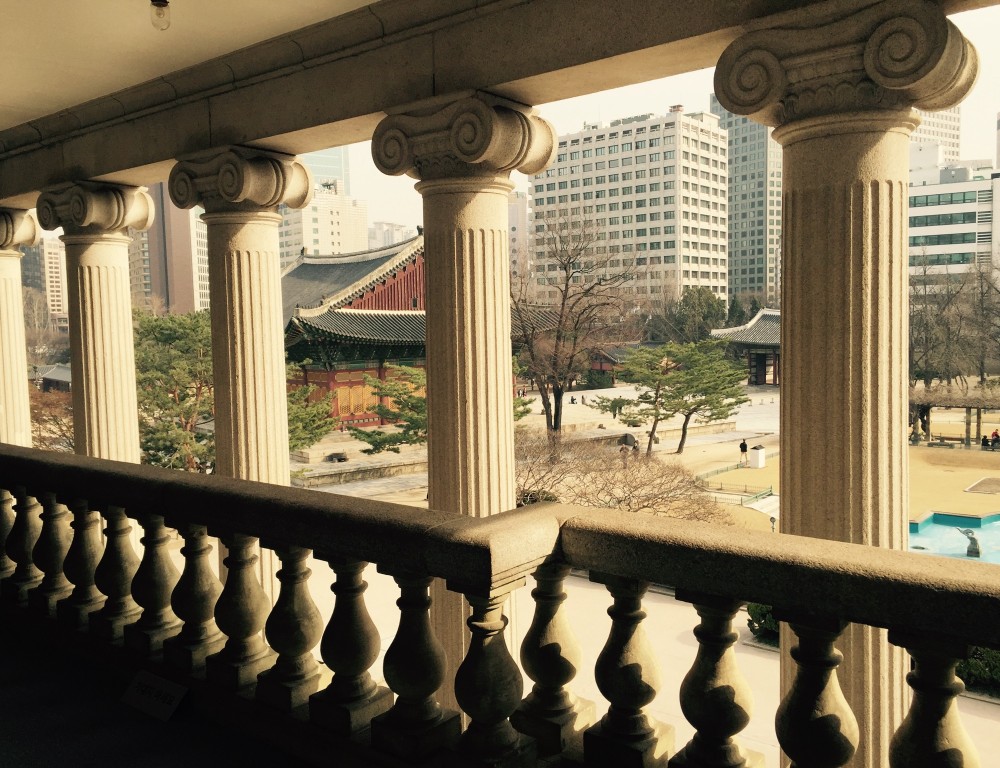 If you pass the hallway on the 2nd floor, there is a door to the Terrace. In there, you can see the big garden. It was such a peaceful space. Even though it looks peaceful, the emperor Gojong would spend time here full of worries and pains of the lost the nation at that time. Also, the king Yeong-Chin would spend the time looking in the direction of cemetery where his mother lies, because he couldn’t go there freely. For that reason, I also couldn’t enjoy the peaceful time here. 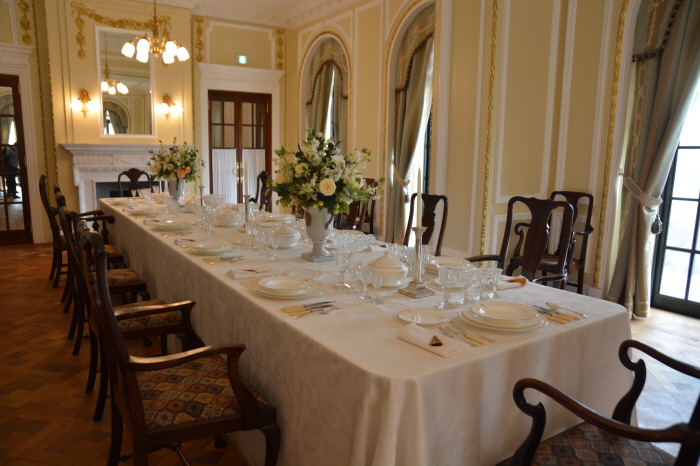 The restoration of the Grand Dining Room, where the Korean emperor had formal lunch and dinners with his guests, is based on a photograph taken in 1918. Historical records show that the banquets held for foreign guests largely served Western-style cuisine. Sometimes, Korean cuisine was served. At that time, one foreigner said “I had disgusting Korean food”. These days, Korean food is very popular all over the world. But, during 1910s, it must be the first time that foreigners had Korean food. That’s why foreigner felt a knot in his stomach I think.

We all discussed which Korean food the foreigner had and concluded it should be Kimchi, but I’m still wondering.

After listening to the story from a guide, I became more aware of history ‘Korean Empire’. When I was young, in the history workbook, it was the small part of the story that not given as major coverage. But, after visiting the Seokjojeon hall, I got to know about the history for 14 years in 1910s. I felt an effort to let us know history deeply by restoring look alike by photographs during 1910s. I would like to recommend this Seokjojeon hall to my friends. Let’s visit here, if you want to experience history directly and time travel to 1910s.

The post card and paper dolls about traditional Clothes “Hanbok” 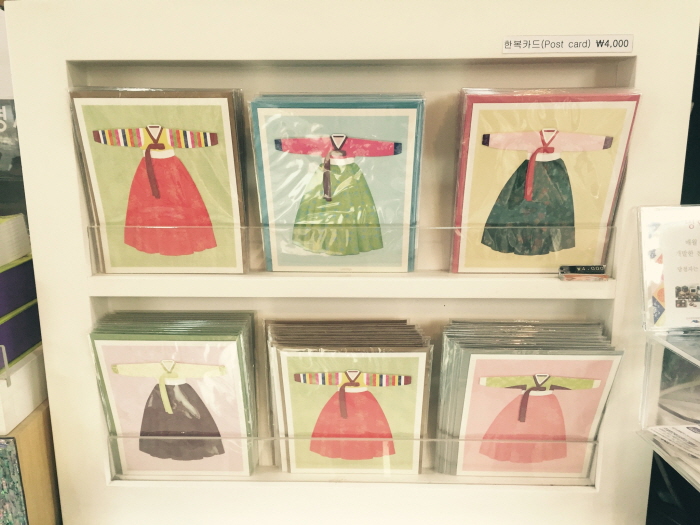 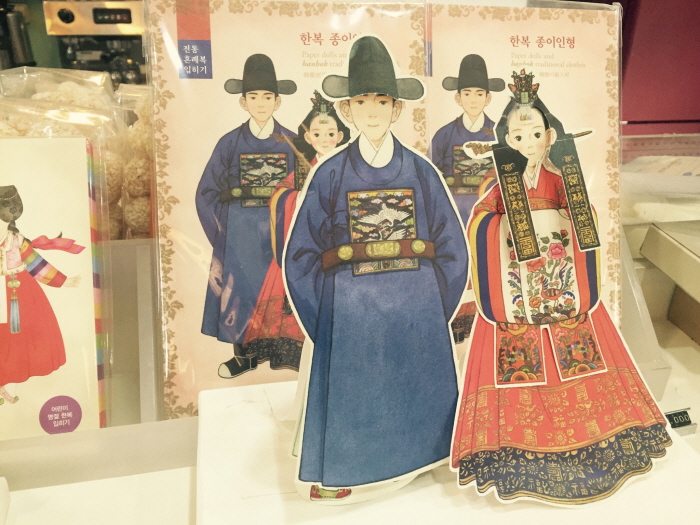 Leaving the Seokjojeon Hall, on the way to the exit door, there is a souvenir shop. If you are interested in Hanbok, the traditional clothes, let’s buy one and send a mail to your family or friends using this post card. Also, there is a paper dolls wearing Hanbok.

On the left side of the post card, you can see a place where you can stamp the Deoksugung Palace. Take your diary in your bag and stamp for your memory in Seoul.

By Subway: City hall Station (line1 or Exit 12 from subway the line 2)