Muju County: Center of the country

Muju-gun County connects six cities and counties across five provinces, including South and North Gyeongsang Provinces, South and North Chungcheong Provinces and North Jeolla Province. With the Daejeon-Jinju Expressway cutting through it from north to south, Muju now lies at the heart of the country. Wherever you are in the country, whether Seoul or Busan, you can reach Muju within two hours.The county’s total area is some 632 square kilometers, about 27 square kilometers larger than the formal size of the capital Seoul. Meanwhile, its population remains at only about 26,000, less than the total population of many of Seoul’s administrative dongs. Muju is an unpolluted rural countryside village, in sharp contrast to many bigger cities.During the Samhan period of Korean history, or the Proto-Three Kingdoms of Korea, small city-states existed collectively before the formation of Korea’s larger Three Kingdoms. In those days, the county was part of the eastern part of Byeonhan and Jinhan and the western part of Mahan, along the Sobaeksan Mountains. During Joseon times in the 15th century, Mu-pung from Silla and Ju-gye from Baekje combined to become Muju, using the first syllable of each region. 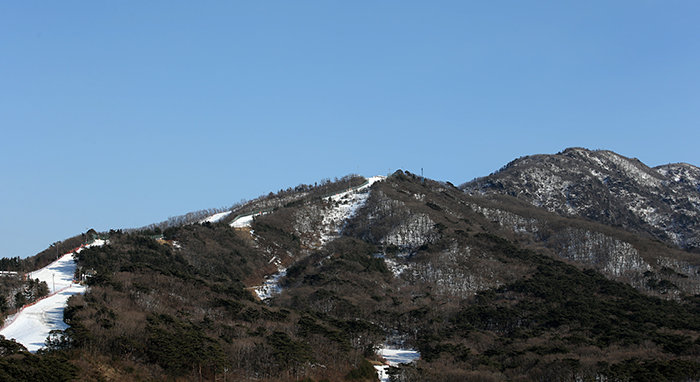 Deogyusan Mountain in Muju-gun County is the fourth highest mountain in Korea. The highest point is Hyangjeokbong Peak (1,614 meters).

Muju is the perfect place to appreciate an end-of-winter landscape. More than ten surrounding mountains top out above 1,000 meters, including Deogyusan, the nation’s fourth highest mountain, in addition to Namdeogyusan, Muryongsan, Jeoksangsan and Daedeoksan Mountains. Most of the land there sits at about 400 to 500 meters above sea level. Thanks to these geographical features, the region shows a temperate variance of about five degrees Celsius, depending on the exact location.

More than half of the population works in agriculture. There are abundant mountains, but relatively less farmland, and most of them work at dry-field farming, instead of wet rice paddies. The climate is quite cool, as it is surrounded by high mountains, and it creates a good environment in which to raise vegetables, such as radishes and Napa cabbage. Garlic, ginseng, walnuts, pine nuts and mushrooms are also popular regional specialties. There are a great number of restaurants that serve a grand set of seasoned wild vegetables picked from nearby hillsides. 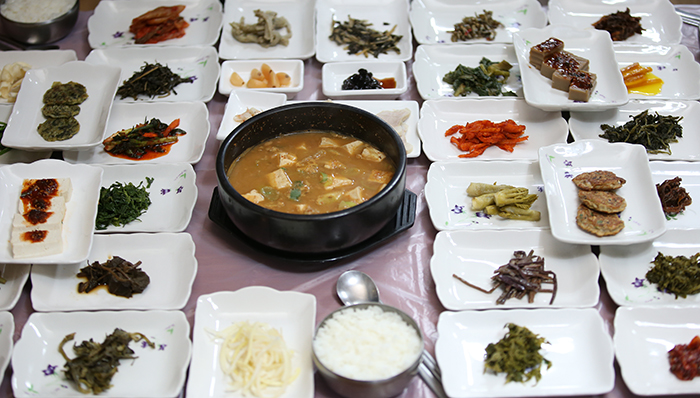 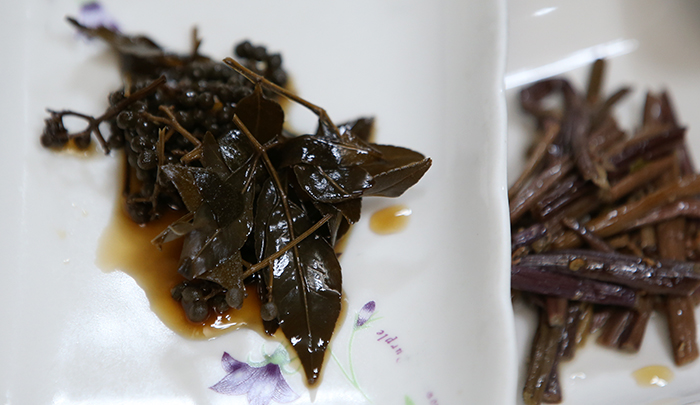 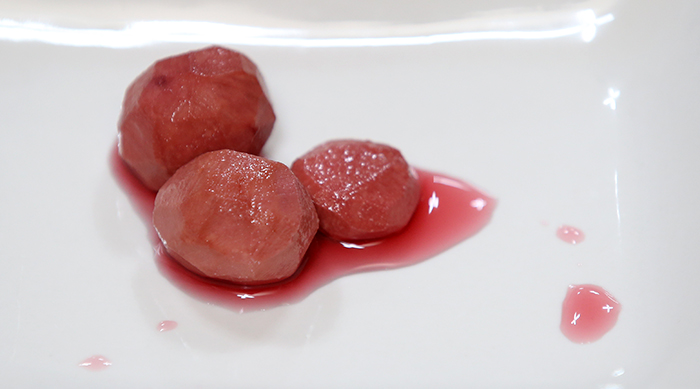 The combination of bean paste stew and a wide variety of seasonal wild vegetables is a sight to behold.

Choi Yeon-pyo, head of the Byeolmi Garden, or the Specialty Garden, has run the restaurant for over 40 years. He said, “I pick wild herbs and vegetables myself from the nearby mountainside and don’t ever add any artificial flavors when seasoning.” The table is set by the bounty of nature, and diners are given different herbs and vegetables each season.

Muju was first recognized internationally in 1997 when it hosted the Winter Universiade, a first for Korea. The sporting facilities were eventually converted into the Muju Deogyusan Resort, gaining global attention once again. Tourists visit the county during the winter to ski and during the warmer seasons to enjoy golf and other sports. Both unfold in a beautiful yet natural mountain location.

To enjoy the scenic beauty from atop the mountain, it’s easiest to use the gondola. It takes you from the base of the ski run up to Seolcheonbong Peak at 1,520 meters. From there, you can walk some 10 minutes to the top of the mountain at Hyangjeokbong.

The resort is equipped with condominiums, as well as open-air swimming facilities, good to relieve fatigue. For those who don’t want to waste their energy climbing, it’s recommended you take a peaceful walk through the Deogyusan Mountain Natural Recreation Forest. 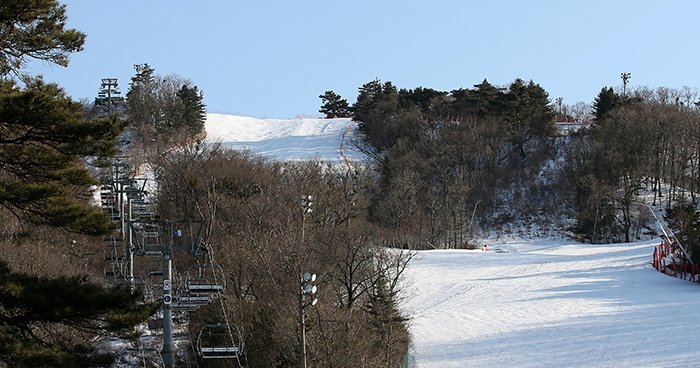 The ski slopes (top) and golf course at the Muju Deogyusan Resort are ready to welcome in a new season.

Besides the resort, Muju has many other leisure and sporting options. Opened in 2004, the Taekwondowon plays a central role in taekwondo and is a sacred place for the martial art’s 80 million adherents worldwide. Muju also offers a shelter for cyclists who gather from across the globe for the Tour de Korea, an annual international cross-country bicycle race, the eighth of which will take place this October.

A ‘bike-tel’ in Seolcheon-myeon is a popular overnight stay for bicyclists, particularly those touring against the beautiful backdrop of Mother Nature. 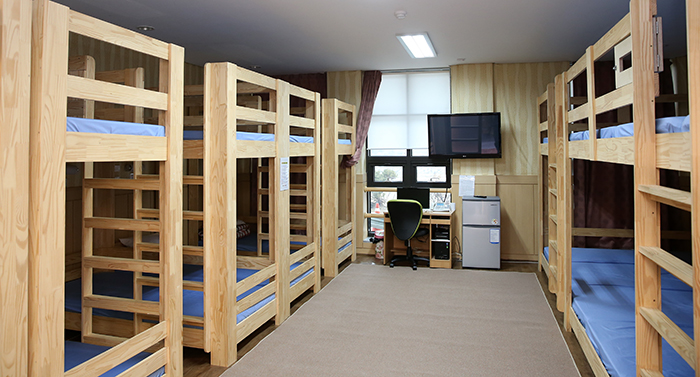 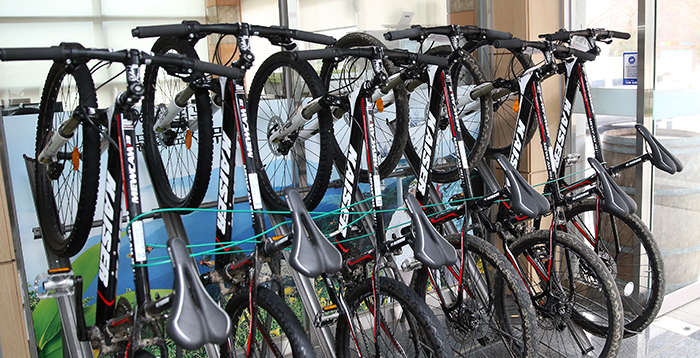 Mountain bikes are available for rent at the ‘bike-tel’ hotel, allowing cyclists to explore nearby waterfalls and mountains.

Recently, a “bike-tel” was built in Seolcheon-myeon to accommodate the rapidly increasing number of bicycle tourers. It succeeded in getting itself listed on a list of “excellent accommodations,” as jointly selected by the Ministry of Culture, Sports and Tourism and the Korea Tourism Organization. The first floor is used by individual cyclists. Rooms on the second floor are for tourists with families or friends.

Deputy director Park Gil-chun from the county’s culture & tourism division said, “A growing number of tourists look to cycle along the Gucheon Valley trail. If you come and visit between April and May, you will be able to enjoy the most beautiful landscape in the country.”

How to get to Muju-gun County

From Seoul: Gyeongbu Expressway – Suwon – Pyeongtaek – Daejeon – Daejeon to Tongyeong Expressway
The nearest train station by either KTX or another rail service, and the closest express bus terminal, is Jeonju Station.