DMZ in Korea, the Scene of Movie ‘The Interview’

The end of last year ‘2014’, the movie ‘The interview’ had brought enormous big issue all over the world. You would have seen many outdoor billboards of ‘The interview’ all over the streets. The movie story is A MC and a producer of talk show land an interview with North Korean dictator ‘Kim jong-un’, they are recruited by the CIA to turn their trip to Pyongyang into an assassination mission.

The reality of division Korea into North and South

It’s been 15 years, since I visited near Military Demarcation Line (MDL). When I was young, I visited ‘Unification Observatory’ with my family. The thing that I remembered was North residents who leading their life as usual over the MDL. I just felt surprising, the reason that even though it’s not quite far from South Korea, they had been living in a different world. I wondered before visiting DMZ again how I feel that after a long time.

First of all, the DMZ is good for business because it’s one of the best tour programs in South Korea that many tourists can experience MDL of a divided country that world’s only. However at the same time, as a Korean, it was sad thing that it’s made into tour program, because millions of Korean families have been separated following the division in 1945 and the 1950 Korean War and left grief-stricken far more than half a century.

It’s been come out many courses that I can experience the Military Demarcation Line (MDL) more than before. One of things was ‘The 3rd Infiltration Tunnel’. It was scary thing because it was apparently designed for a surprise attack on Seoul from North Korea, and can easily accommodate 30,000 men per hour along with light weaponry. It was only 44km from Seoul; the tunnel was discovered in October 1978.

The entrance to ‘The 3rd Infiltration Tunnel’ You are not allowed to take photographs in this tunnel.

There are two entrances. One is riding monorail car, and another is just walking down to the tunnel. In my case, I went into the tunnel by walk. We all put on yellow safety helmets by ourselves. After 10min walking down, I could see the tunnel 1.1 miles long, 6.6ft high and 6.6ft wide. Black “coal” was painted on all over the walls to declare that it’s part of a coal mine. It was the moment that we felt disappointed at their duplicity.

I went deep into the tunnel. I felt nervous and interested at the same time because I was approaching to the MDL and North Korea. If you keep going to the inside tunnel, there is the wall that blocking no longer access. From that point, I had to just see the rest of tunnel through the small hole.

The second place that I experienced newly was ‘Dorasan Station’ that is connected with North Korea by Gyeongui Line. The inside of the ‘Dorasan Station’ was really huge and neat. If you go straight right against to the inside, you can see the signboard ‘Tracks to Pyeongyang’. That shows our hope to go to Pyeongyang by trail someday.

The Exterior and interior of Dorasan Station

The signboard that shows ‘Trans Eurasian Railway Network’ start from South Korea and another one written ‘Not the last station from the South, But the first station toward the North.’

The place where you can stamp your visit ‘Dorasan Station’

Our Family, Not ‘Anybodies’

Then, I wonder how foreigners feel the DMZ tour. The nuclear of North Korea and the division of Korea into North and South are the big issue all over the world. Also recently, by being released the movie ‘The interview’ by Sony Pictures, many people are having more interests in North Korea and also they are having interests about DMZ tour I think.

22th, Dec’ 2014, in UN Security Council to debate North korea’s human rights, there was a speech by Mr. Oh who is an ambassador of UN.

“For south Koreans, people in North Korea are not just anybodies. Millions of South Koreans still have our family members and relatives living in the North. Even though we never hear from them, even though by now the pain of separation has become a cold fact of life, we know that they are there just a few hundred kilometers away from where we live. We cannot read what is described in the ‘Commission of Inquiry’ report without it breaking our hearts. We cannot listen to stories of North Korean defectors without sharing in their tears, without feeling as if we are there with them experiencing the tragedies. We only hope that one day in the future, when we look back on what we did today, we will be able to say that we did the right thing for the people of North Korea, for the lives of every man and woman, boy and girl who has the same human rights as the rest of us. Thank you.”

After his speech, the hall became quiet; the thing that got hot was the reaction of Korean young people. It was the time that we thought about relationship between South and North again that we have forgotten.

Next to ‘The 3rd Infiltration Tunnel’, there is a multiplex that showing the history of division of Korea into North and South and natural ecosystems of DMZ. I hope many foreigners who poked fun at North Korea by ‘The Interview’ take seriously about the relationship between North and South again by watching the multiplex cinema in DMZ.

The rest of Pictures of DMZ

The 1st floor, the observatory of Imjingak Park. You can see the convenience store and popeyes. 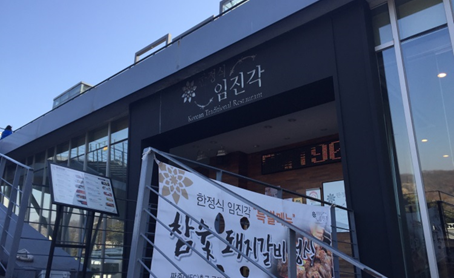 The 2nd floor, the observatory of Imjingak Park, Korean Restaurant 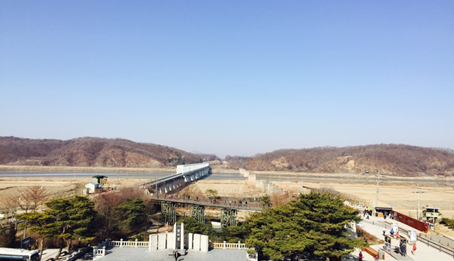 The panorama of Imjingak Park

The entrance to the Dorasan observatory and the photo toward ‘Gaeseong’ of North Korea Taking a picture of ‘Gaeseong’ closer is not available, so let’s observe the ‘Gaeseong’ using a telescope. 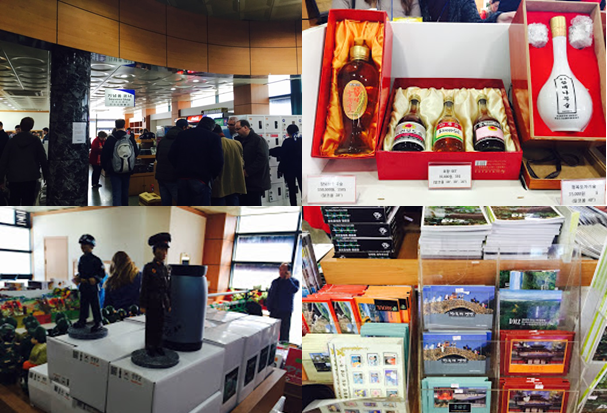 The Souvenir shop that located in ‘The 3rd Infiltration Tunnel’

You can see the souvenir shop during DMZ tour. The biggest one is located in front of entrance to ‘The 3rd Infiltration Tunnel’. The model of North Korean army, post cards, drinks made by North Korea, chocolates, etc.

Two tips for experiencing DMZ that you can view North Korea

There are two ways that you can visit the DMZ. The first one is booking the tour package at ‘Korea Tour Information (KTI) and being picked up conveniently from your hotel to the DMZ. The second one is making a reservation at Korean site “Korail” and taking a train at ‘Seoul station’ to visit DMZ by yourself.

In my humble opinion, I would like to recommend using Tour Package by ‘Korea Tour Information (KTI)’. If you pay more just KRW15,000, you can go to DMZ conveniently by pick up bus from your hotel. If you go to DMZ by yourself, you should go to ‘Seoul station’ to travel DMZ, but Korean subway system’s complicated.

In KTI, an expert tour guide accompanies you as well and explains everything about DMZ and history. If you prefer convenient travel, come to www.koreatourinformation.com

[The Way to DMZ by Korea Tour Information] 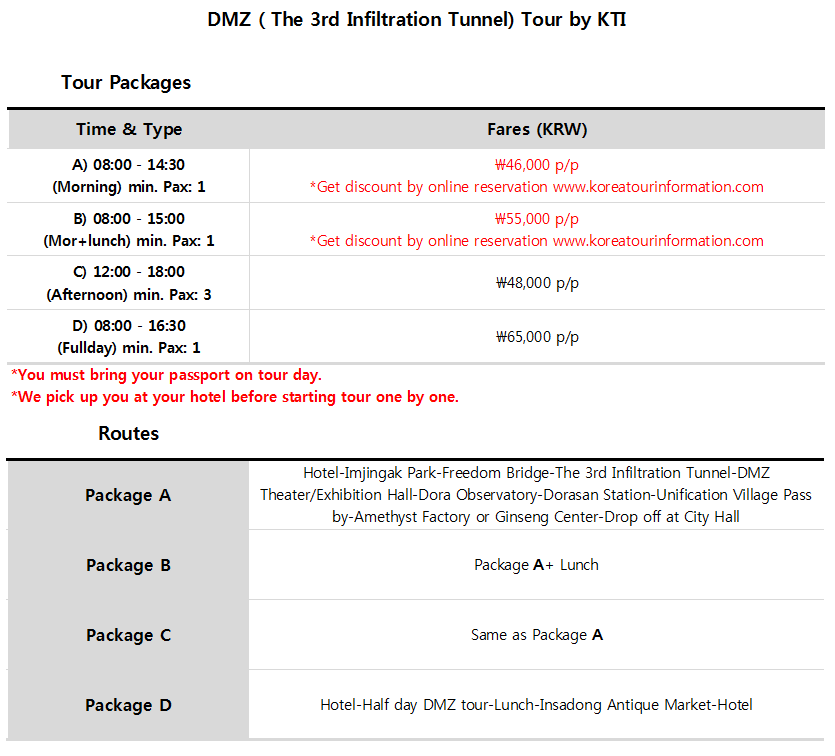