Travelling Korea in a hijab 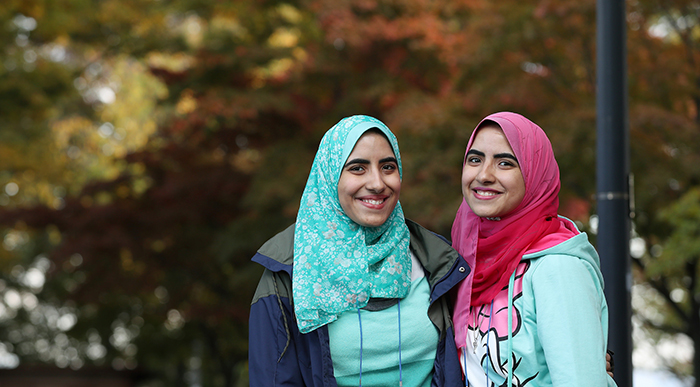 The veil or headscarf is referred to by many names, the most common being the word “hijab,” which simply means “head covering” in Arabic.

“Hijab” is an Arabic word that describes a Muslim woman’s entire dress code, including a veil and whatever else is needed to cover everything except her face and hands. It’s adopted at puberty, an age when, according to Islam, people become accountable for their actions.

According to God, “O, prophet! Say to your wives and your daughters and the women of the believers to draw over themselves their outer garments. That is more suitable, that they should be known and not harmed. Is God not oft-forgiving and the most merciful?” (Quran 33:59)

Many people think that the headscarf is limited to only Muslim women, but this is not true. Some Christian and Jewish women also wear headscarves as a kind of commitment to their face and simply out of common decency.

Although there are some criticisms about wearing a headscarf or hijab, sometimes linking the simple clothing article to female persecution or to religious militancy, this has not prevented activist Nazma Khan, who lives in New York, from wearing her hijab. It’s a symbol of faith, beauty and humility. Hence, the idea of a worldwide Hijab Day was celebrated for the first time in 2013.

The word ‘hijab’ covers a Muslim woman’s entire dress code, and the attire covers not only the head, but also the whole body, except for the face and hands. (Esraa Elzeny)

Khan tried to change this stereotype of the headscarf by launching World Hijab Day to attract sympathy and to encourage both non-Muslim and Muslim women who don’t wear the hijab regularly to wear hijab on at least one day and to try it. She added that the aim is to promote religious tolerance around the world by raising awareness about the hijab. She notes that the veil not only covers the head, but also covers the whole body, including the head, chest, arms and legs, as well as any other articles of loose clothing.

World Hijab Day is held on Feb. 1 every year in nearly 116 countries.

The hijab is a distinguishing feature of Muslim women. Although Islam is not well-known across Korean society, many people see veiled women and know they are Muslim. Korean society is open-minded and everyone has the freedom to act and believe as they want. So Muslim tourists don’t suffer any persecution here. On the contrary, when I visited Korea, many people helped me and many of them asked me about my country. One day during our trip across Korea with Korea.net, it was zuhr prayer time and my Korean friends helped me until I found the qibladirection, and the whole team at Korea .net made sure that our food was always halal.

The Korean government is currently seeking to increase the facilities on offer for Muslim tourists by increasing the number of halal restaurants and helping tourists find places to pray. Muslim women, like women everywhere, like adornment and beauty, and Korea is famous for its people’s beauty and for their elegance. So certainly there would be demand for beauty salons suitable for veiled women, because they can’t remove their headscarf in front of men. There’s only one salon in Seoul to which veiled women can go. It has special rooms and only employs women. It’s located near Samsung Station, and it’s called Satin hair salon.

As for fashion, there’s no problem. Korean stores are filled with clothes that Muslim women can wear, and they’re very elegant and beautiful. Throughout my time in Korea, I found a lot of clothes that fit Muslim women, although I had the impression from Korean TV shows that all the clothes are extremely short and revealing, and that all the sizes were tiny because Korean women were thinner than Arab women. However, I found the exact opposite. All tastes and models are available in all sizes, and there are some stores that even help choose the best and most suitable outfit for Muslim customers. 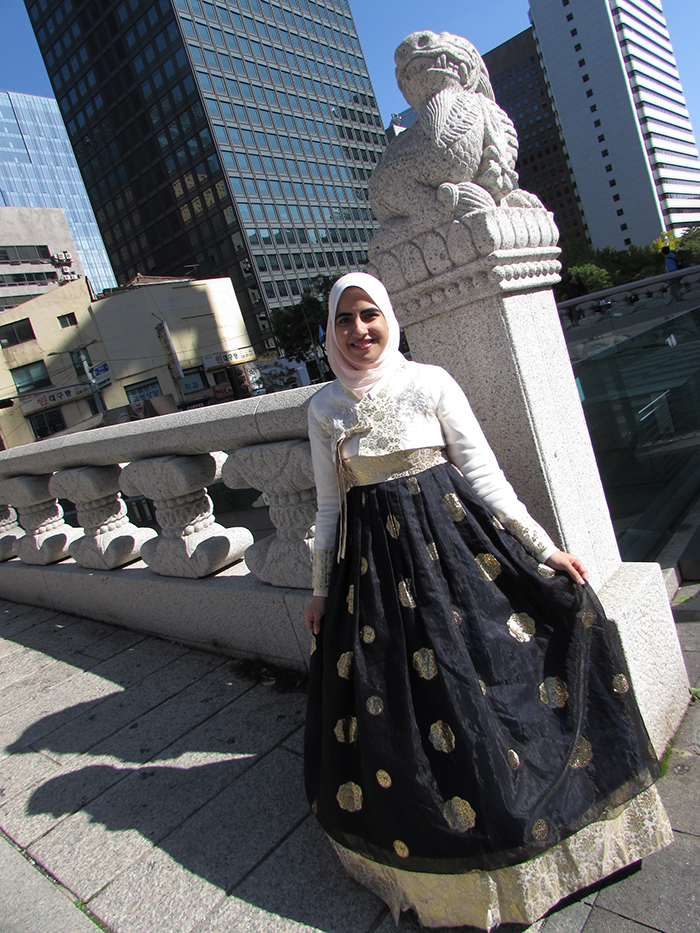 The hijab and traditional Korean Hanbok attire are from two vastly different sets of traditions, but they can be a good match, too. (Salwa Elzeny)

As for traditional Korean Hanbok attire, it’s very suitable for Muslim women. During one of the events at the Korean Cultural Center in Egypt, the teacher showed the Egyptian students how to sew some Hanbok. She saw that Hanbok is very suitable for the hijab, because the ritual of wearing Hanbok is to tie back one’s hair. From the Islamic point of view, Hanbok is a loose set of clothes that covers all of a woman’s body. It’s very similar to the Arab abaya. So it goes well with the hijab. During my visit to Korea and on our first day in Korea, we wore Hanbok clothes and along the Cheonggyecheon Stream. We found that many people stopped us and told us that we were quite beautiful, in Korean. That’s proof that they were impressed by the combination of Hanbok and our hijabs.

Even though some Koreans may not be fully familiar with the hijab or with Muslim society more generally, they showed great respect for our differences. Also, people showed us during our trip that two totally different societies can fit together well. We hope that the hijab can become better and more widely known across Korea and that people around the world will be able to break their prejudices and have a better understanding about this.