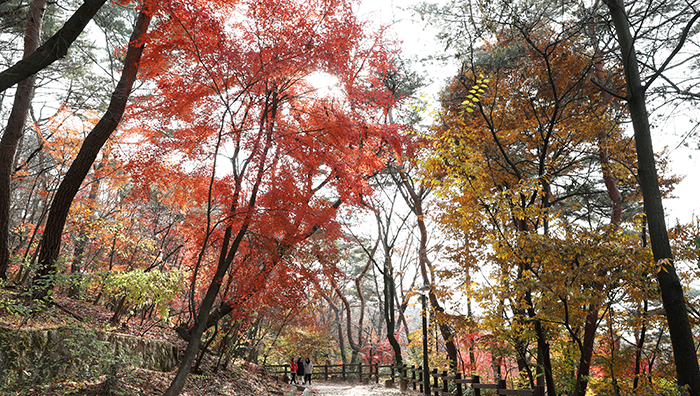 Hikers take a stroll during their lunch break on Nov. 16 around Samcheong Park, colored in yellow and red with its autumn leaves. The trail starts at the Changuimun Gate, one of the eight gates of the fortress wall that surrounded Joseon-era Seoul, runs through the Sukjeongmun Gate, another of the eight gates, and then breaks into two, one trail leading to Samcheong Park and the other to Waryong Park.

Inwangsan and Bugaksan mountains are reaching the end of autumn with crisp golden, red leaves everywhere exuding autumn colors under a warm sun. Seoul’s two major mountains, rising 332 meters and 338 meters, respectively, are ready to send off the season and ring in the winter.

The mountains’ many trees have already let go of their golden-hued leaves, letting them fall to the ground. Mountain-goers stroll through piles of fallen leaves, making crisp sounds here and there with their footsteps. They can spot a squirrel hopping from branch to branch, stocking up on pine nuts for the winter. 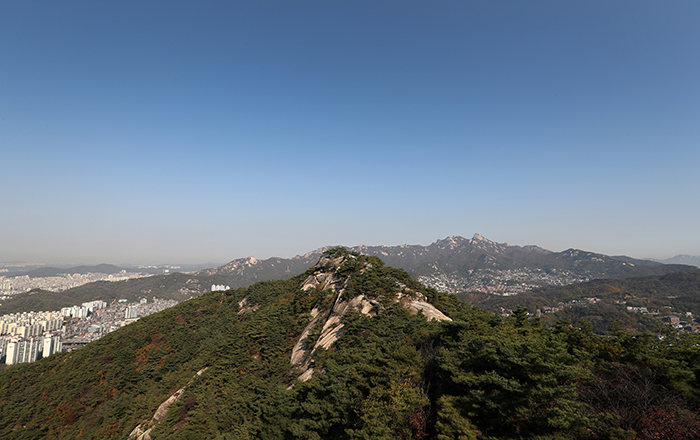 From atop Inwangsan Mountain on Nov. 2, the magnificent landscape of Bukhansan Mountain unfolds ahead, spanning Pyeongchang-dong, Hongje-dong and even the Hangang River in the distance.

The two mountains embrace Gyeongbokgung Palace, one of the capital’s four main Joseon-era royal palaces, and are known for welcoming not only Korean hikers but non-Korean hikers, as well. An excursion to each mountain is short enough to take less than two hours, so hikers, especially the elderly and kids, can venture out into the parks there and enjoy the freedom of the hills.

Although a trip to the mountain top surely leaves hikers out of breath, they will soon find a jaw-dropping panorama of the city spanning the world under their feet.

The hiking also gives more than just picturesque views to enjoy. It gives hikers a chance to travel back in time as they walk along Joseon-era ramparts built along the mountain ridges, sensing that each fortress was built a little bit different from the prior fortress from an earlier dynasty.

One path around Bugaksan Mountain runs from the Changuimun Gate (창의문) to the Sukjeongmun Gate (숙정문). The Changuimun Gate is particularly symbolic, as it was destroyed during a political uprising on April 11, 1623. That uprising is known as the Injobanjeon (인조반정, 仁祖反正), when the 15th Joseon ruler, the Gwanghaegun (광해군, 光海君) (r. 1608-1623), was dethroned and Injo (인조, 仁祖) (r. 1623-1649) ascended the throne as the 16th ruler. That trail offers a glimpse into the functions and roles of Joseon fortresses. The gates are two of the main eight gates of the fortress wall that surrounded the capital Hanyang, what is today’s Seoul.

Hikers who want to explore Bugaksan Mountain are required to show some ID at the entrance to the park and to fill out an information form. Hikers are allowed to enter from 10 a.m. to 3 p.m. and are expected to leave before 5 p.m. during the colder months from November to February. 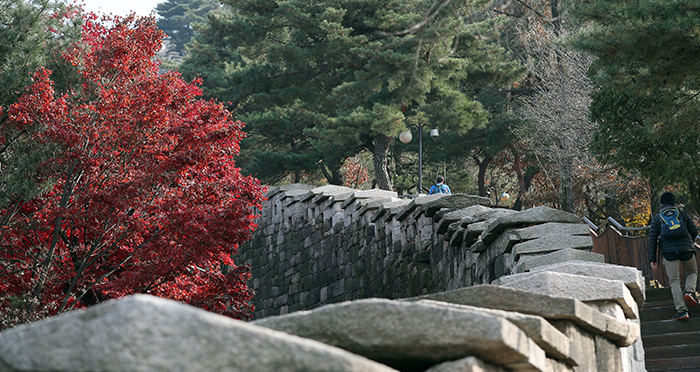 A trail weaves upward from the Changuimun Gate and around Bugaksan Mountain, leading hikers up a steep flight of stairs along Seoul’s old fortress wall. 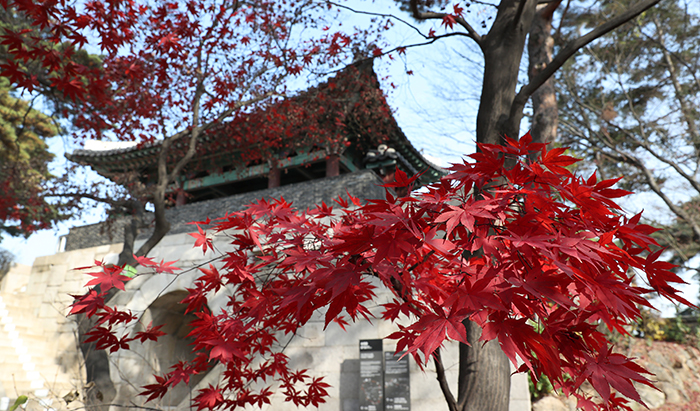 The Sukjeongmun Gate shines in the autumn with golden and red leaves scattered all around. 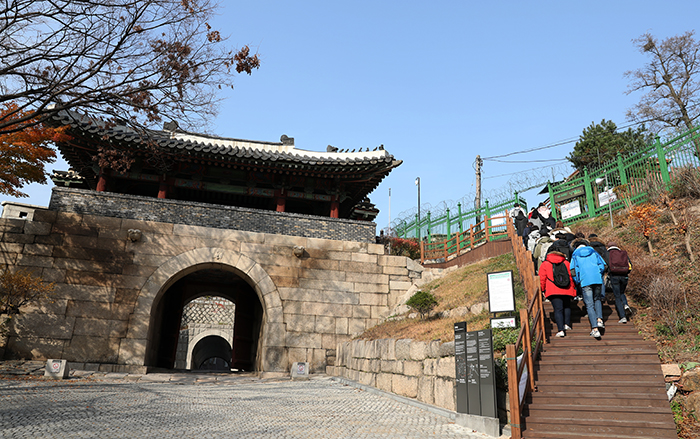 The Changuimun Gate, near Bugaksan Mountain, is also called the Bukmun (북문), meaning the northern gate, or else the Jahamun (자하문). The gate was burned down during the Imjin War in 1592 and was rebuilt in 1740. 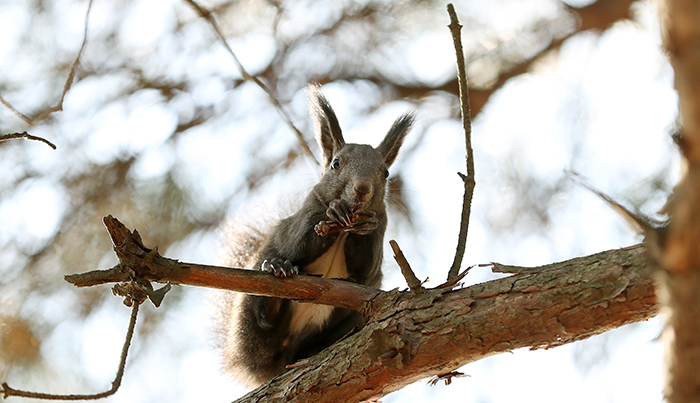 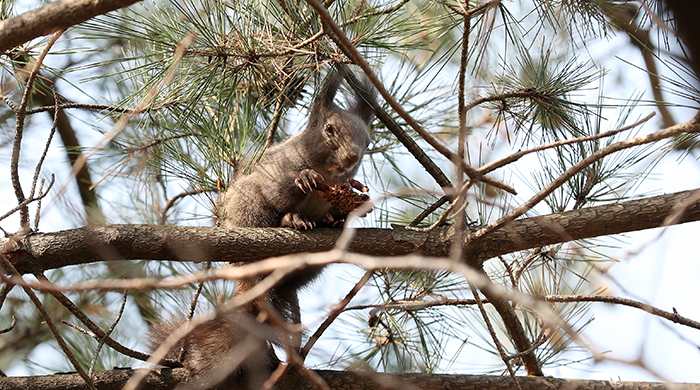 Squirrels are often spotted across Inwangsan and Bugaksan mountains, filling their stomachs and gathering pine nuts for the winter. 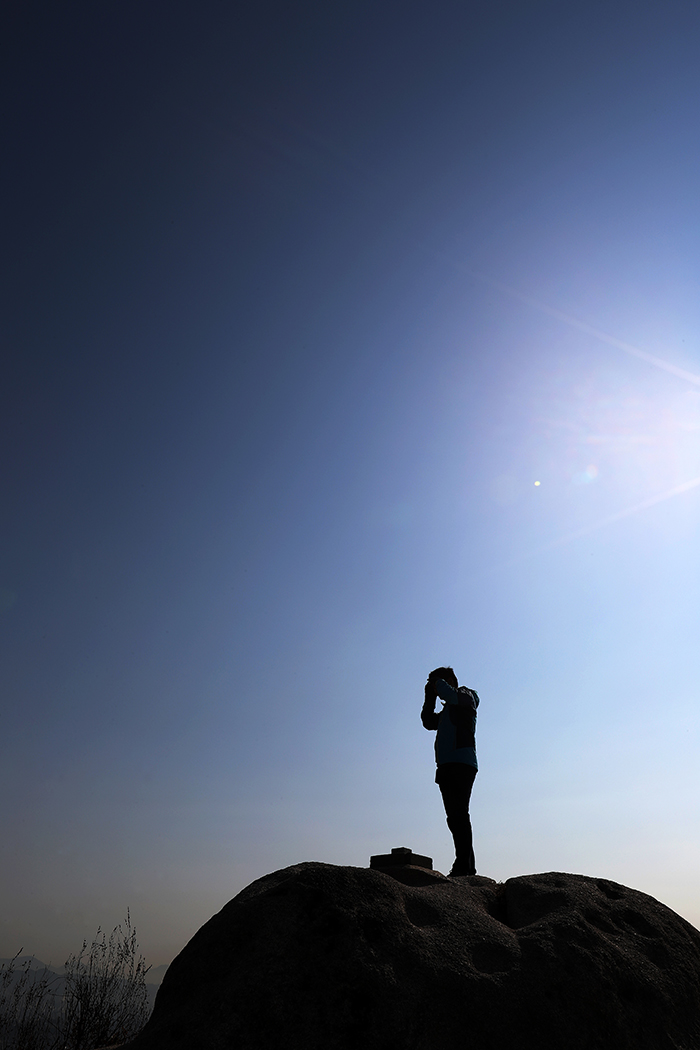 Standing atop Inwangsan Mountain on a clear autumn day you can enjoy a wide panorama of Seoul. On Nov. 2, a hiker wipes away the sweat under a cloudless, blue sky.