Jeonju, the capital of Jeollabuk-do Province, has been selected as the third best attraction in Asia, where world travelers should visit within the year.

Jeonju has been recently ranked as the third best attraction in Asia on Lonely Planet’s “Best in Asia: our pick of where to go in Asia in the next 12 months” list, after the island of Hokkaido in northern Japan and China’s megalopolis Shanghai. Jeonju was followed by the Con Dao Islands in Vietnam and then Hong Kong, which were fourth and fifth, respectively. 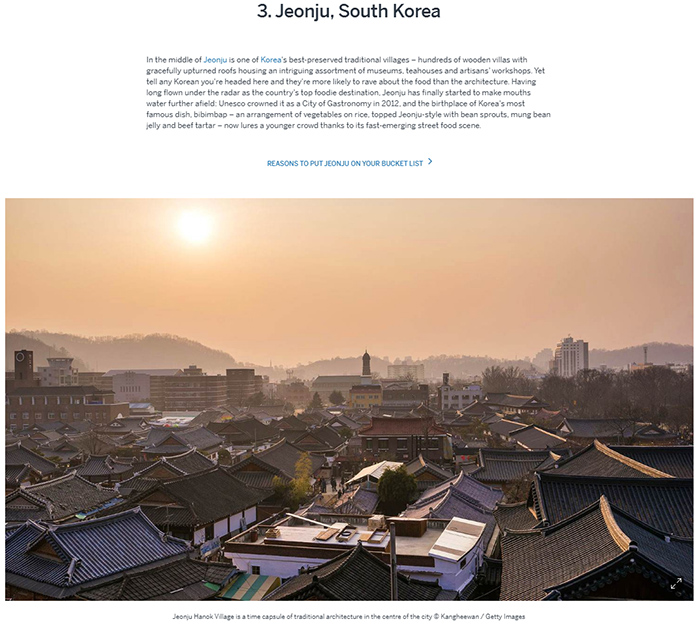 Jeonju is ranked as the third best attraction in Asia, as selected by Lonely Planet writers, on a list of the best Asian attractions to visit over the next
12 months. The above photo shows the Lonely Planet website that introduces Jeonju with a photo of its traditional Hanok village.

Lonely Planet said that Jeonju is “one of Korea’s best-preserved traditional villages [with] hundreds of wooden villas with gracefully upturned roofs housing an intriguing assortment of museums, teahouses and artisans’ workshops.”

The travel publisher also focused on Jeonju’s famous eateries. It said, “Jeonju has finally started to make mouths water further afield,” as the city is, “the birthplace of Korea’s most famous dish, bibimbap,” and, “now lures a younger crowd thanks to its fast-emerging street food scene.”

It also mentioned that, “UNESCO crowned the city as a City of Gastronomy in 2012.” 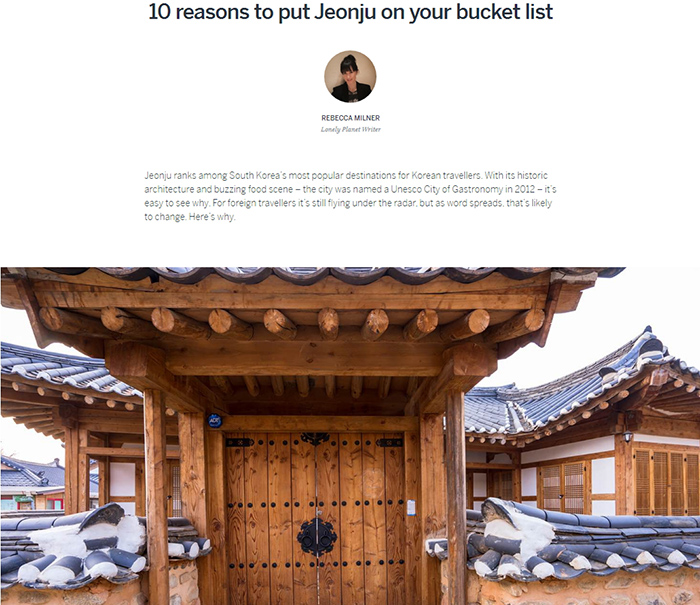 Lonely Planet writer Rebecca Milner explains the charms of Jeonju in her story titled ’10 Reasons to put Jeonju on Your Bucket List.’

Lonely Planet writer Rebecca Milner said in her article “10 Reasons to put Jeonju on Your Bucket List” that the city has one of the country’s largest collections of traditional homes of the Korean upper class, referring to Jeonju’s famous Hanok homes.

Milner also wrote about the city’s charms, including its various eateries that serve up bibimbap, makgeoli rice beer and various kinds of street food, as well as the fact that Jeonju was the home of Joseon founder Yi Seong-gye and houses his remains. The city is famous for its Joseon history, the Nambu Market, the Jeondong Catholic Church and Martyr Mountain, as well as nearby mountains such as Naejangsan and Maisan mountains, she wrote. 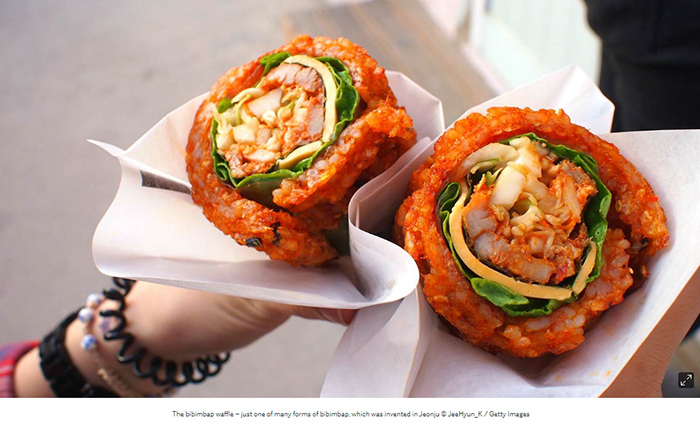 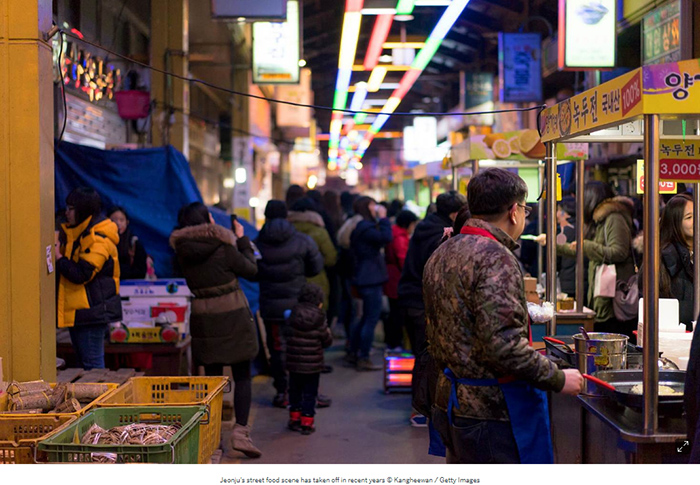 Featuring photos of a waffle made from bibimbap and an alleyway in the Nambu Market, Milner writes that, ‘Jeonju’s street food scene has taken off in recent years.’

K-TRAVEL BUS
About the author