From Jungfrau Peak atop the Alps to Punta Arenas at the southernmost point of Chile, it’s possible to enjoy one signature Korean dish. Can you guess what it is? 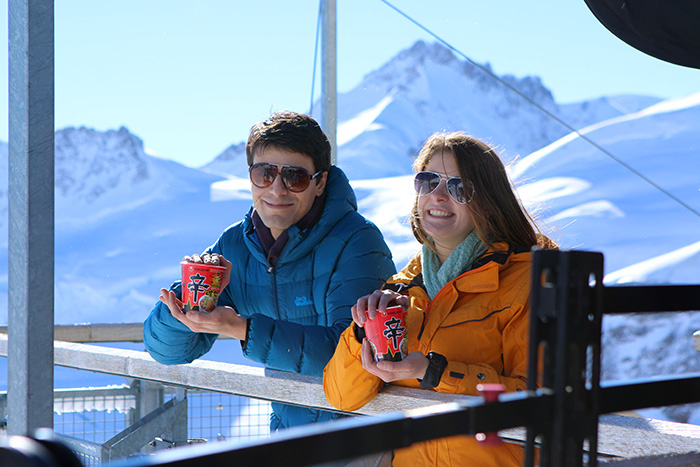 Tourists at Jungfrau Peak in the Swiss Alps enjoy a cup of Korean instant noodles.
Visitors to the mountaintop can enjoy both winter sports and Korean noodles.

According to statistics from the Korea Customs Service, Korea’s 2015 ramyeon exports were worth USD 218.79 million, showing a 5 percent rise over exports from the previous year. This is, so far, the most Korean instant noodles ever exported. Korea’s ramyeon exports have now surpassed USD 200 million for four consecutive years, since 2012. Exports to China were worth USD 34.56 million, a 54 percent increase over the previous year. Exports to the U.S. also jumped, to USD 29.62 million, up 13 percent from 2014’s numbers.

The key to success for Korean instant noodles is their variety of tastes and unique flavors. According to the Ministry of Agriculture, Food and Rural Affairs, Korean instant noodles offer various kinds of flavors, ranging from kimchi to cheese and jjajang, a type of black bean sauce. Chinese customers find Korean ramyeon to be less oily and salty compared to noodles from other countries like Taiwan. A variety of ramyeon recipes have also helped increase Korea’s ramyeon exports to China after they were promoted on Korean variety shows and talked about online.

Across the Pacific, more U.S. consumers are also looking for that Korean instant noodle taste. The agriculture ministry said, “Recently, more office workers in the U.S. are going for instant noodles as a quick and easy meal. As of the end of July 2015, about 450 noodle restaurants are in operation across the U.S. These businesses cook Japanese noodles mostly, but Korean instant noodles are also winning more recognition among consumers thanks to their various flavors and tastes, such as spicy or jjajang black bean sauce.”

The ministry also predicted that more U.S. customers will seek out Korean instant noodles, while mentioning one case where a Korean instant noodle product, a premium jjajang noodle pack, grew in popularity overseas because buyers there continued to order the product after it went viral online. 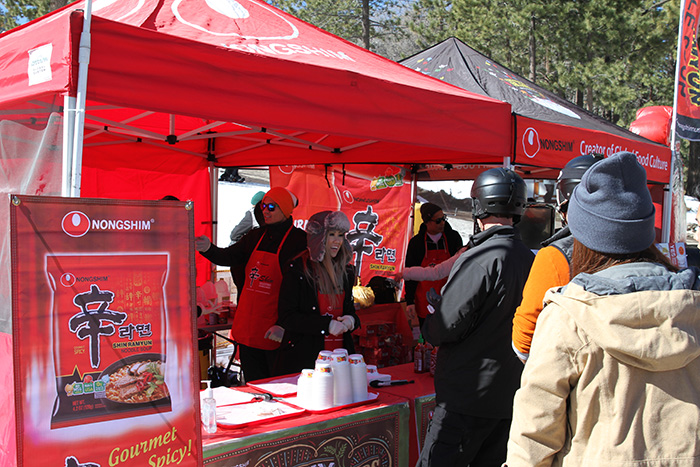 A Korean instant noodle tasting tent attracted a lot of popularity at a ski resort near Los Angeles on Feb. 6,
where some 1,000 cups of noodles were devoured within three hours.