Korea has been ranked as the safest country for travelers.

According to Numbeo, a data aggregator of city and country statistics, Korea has the highest overall safety index in the world, with a score of 85.69, and it ranked number one among the 117 countries on the list. 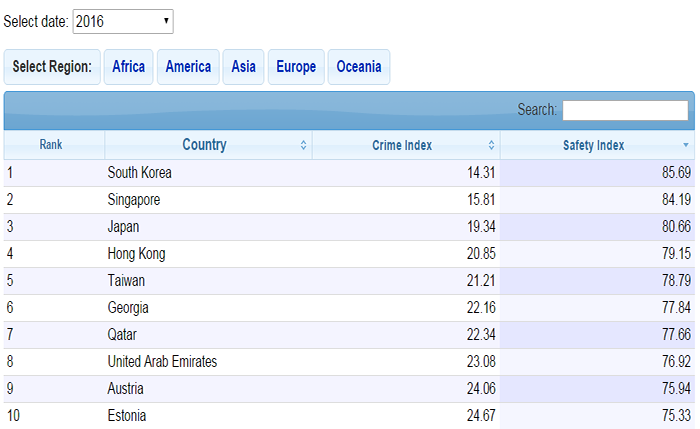 Numbeo’s 2016 crime index by country ranks Korea as the safest country in the world, with an overall safety index of 85.69.

In early 2015, Korea ranked fourth in the survey with a safety index of 82.01. By mid-2015, the country rose to the number one spot with a score of 83.10. It has since maintained its position in the ranks. Korea’s gun restriction laws and its systems to maintain public order are credited as reasons for these results.

Visitors to the Numbeo website can compare country crime and safety statistics side by side.
Seoul and Singapore both have very high scores in terms of perceptions of safety when walking during both the day and night.

While the data at Numbeo is not collected from government sources, the website surveys thousands of contributors to provide current and timely information on world living conditions, such as cost of living, crime, housing indicators, health care, traffic and pollution. Questions on the surveys are similar to scientific and government surveys.To calculate overall crime indices, the statistics aggregator uses factors such as the level of crime, gun control laws, types of crime and safety during daytime and nighttime hours.

Most Popular Tour Ski tour
About the author