Paju is a city of art and nature that embraces the legacy of the Korean War.

Paju’s Imjingak Park was established in 1972 to give consolation to homesick refugees who had fled North Korea during the Korean War (1950-1953). It represents the hope of future reunification. It rests on the banks of the Imjingang River, just south of the Demilitarized Zone (DMZ). Each year, the Imjingak Park hosts unification events, including the Peace Bicycle Tour and the 300-kilometer DMZ Peace and Unification Walkthrough. Twice a day from Tuesday to Friday, the DMZ Train runs from Imjingang Station to Dorasan Station, the closest train station to the inter-Korean border. During the Chuseok and Seollal Lunar New Year’s Day holidays, people who are originally from North Korea come here to pray with yearning hearts, facing their homeland and their families left behind.

As a border city between the two Koreas, Paju is a symbol of the painful division and of the war itself. Since the Imjingak Pyeonghwa-Nuri Park opened in 2005, the city has embraced its past and reinvented itself as a place of reconciliation and harmony. In the past, Hwang Hui (1363-1452), a Joseon prime minister, and the respected Confucian scholar Yulgok Yi I (1536-1584) spent their later years in Paju and enjoyed the natural beauty of the area. Today, Paju is a center of art, with galleries and book cafes welcoming visitors. 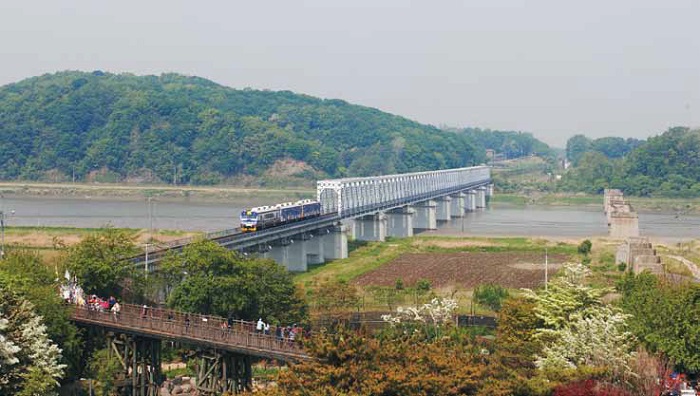 The DMZ Train runs to Dorasan Station in Paju.

Located in Paju’s Gwangtan-myeon, this 13-hectare garden is home to 1,420 species of plants. All year round, visitors can enjoy natural works of art in specialized gardens, including the Queen’s Garden, the Heaven’s Square and the Water Garden. Due to its lively, colorful vibe, many popular soap operas were filmed here, including “Rooftop Prince,” “City Hunter” and “Personal Taste.” Samneung is another good place to visit if you love nature, especially in the autumn. Including a cluster of royal tombs and a UNESCO World Heritage site, its fall foliage is considered some of the most beautiful in Paju. 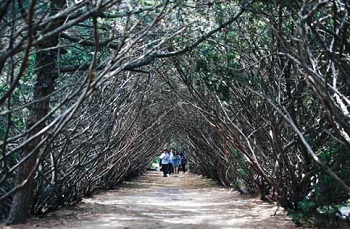 Imjingak Park is located near the northern end of National Route No. 1, a road known as Unification Road, or Tongil-ro. No civilian from the South can get closer to the North than the end of this road. It is only seven kilometers from the Military Demarcation Line that divides the two Koreas. Created in 2005, the peace-themed park is famous for Windy Hill, where thousands of colorful pinwheels spin. It’s popular among photographers for its small and large ponds, eye-catching art installations and unique cafes. An important historical element of this park is Freedom Bridge. It used to be a rail bridge for the train line connecting Seoul and Sinuiju, a town on the Amnokgang River in the northwestern corner of North Korea. The bridge was named by prisoners of war who returned to the South over the bridge at the end of the Korean War. At the closed bridge’s entrance, people attach prayer ribbons to the fence, wishing for peace and unification on the Korean Peninsula.

In 1997, local artists joined together to create a space where they could work and exhibit their art. The name of this community, Heyri, comes from a traditional farming song from Paju. Appropriate for a community of artists, the aesthetics and striking architecture are also major aspects of this town. In fact, some of Korea’s best-known architects collaborated to create the village’s master plan, which harmonizes buildings with the natural surroundings. The plan restricts buildings to three-stories, limits the use of fences, walls or paint, and encourages the planting of native trees and wildflowers.

The aesthetics involved in creating an ideal space for work is also embodied at the Paju BookCity, where unique, eco-friendly buildings house the offices of mainstream publishers. They also usually sell discounted books directly from the ground floor of their buildings. Here, book cafes have walls filled with books. It is a perfect place for bibliophiles to escape their busy life and to enjoy some quiet reading time.

The Hwaseokjeong Pavilion sits in Paju. (left) Prayer ribbons are tied to the fence at Imjingak Park by visitors wishing peace and unification on the Korean Peninsula. (center) A public library at Paju BookCity.

These traditional pavilions are excellent spots from which to view the Imjingang River, which flows from the Masingnyeong Range in eastern North Korea and into the Hangang River near Seoul. The Bangujeong is located in Munsan-eup and was built by Hwang Hui, a Joseon prime minister from 1431 to 1449. He spent the remainder of his life there after resigning from his post. Even after he died, the pavilion was maintained as a memorial, but it was destroyed by fire during the Korean War. In 1962, it was restored by Hwang’s descendants.

The Hwaseokjeong is in Papyeongmyeon. Here, Joseon scholar Yulgok Yi I penned many poems in his later years. He wrote, in the poem titled “Hwaseokjeong,” that, “It is late autumn at the pavilion, and the thoughts of this poet continue endlessly. The waters of the river are as blue as the sky, and the leaves are as red as the sun.” The Imjingang River flowing past the pavilion makes it even more exquisite.