Across Korea, there are alleys and side streets specializing in a particular Korean food. Sure, you could probably find any Korean food you want in Seoul at an inflated price, but it can never compete to the authentic experience of visiting the food alley where it is a specialty. In the city of Chuncheon, now made closer to Seoul thanks to the completion of the Gyeongchun Line, visitors can taste the best dakgalbi of the nation at Myeongdong Dakgalbi Street, a narrow alley surrounded on both sides by specialty restaurants all offering the same regional specialty. 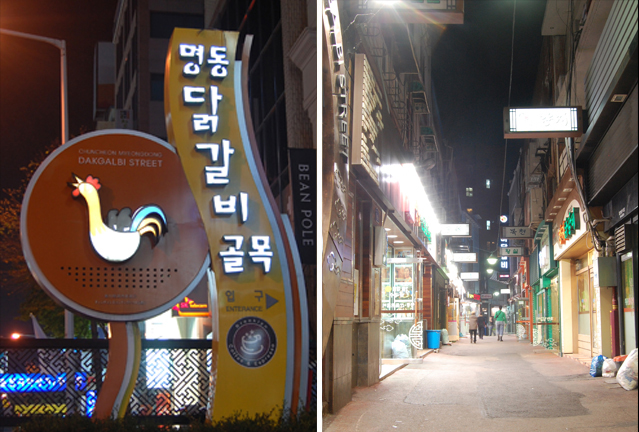 The entrance to Chuncheon Myeongdong Dakgalbi Street is marked by a big glowing sign (left); the street is lit with bright storefronts late at night (right).

Dakgalbi is a spicy stir-fry of diced chicken in chili pepper sauce, potato and assorted vegetables, and rice cakes. It is often served with noodles or rice to soak up the excess sauce. It’s cooked directly at the customer’s table in an iron pan. A typical restaurant provides everyone with aprons to protect clothes from the occasional spatter of boiling sauces, which are bright orange and tend to leap out of the pan at diners. Despite the name “dakgalbi,” which translates to “chicken ribs,” there is no rib meat in dakgalbi, and Chuncheon’s restauranteurs prefer to use more tender leg meat.

Chuncheon is a center of poultry agriculture, ensuring that the specialty restaurants get only the freshest chicken meat. Due to Chuncheon’s northern location, it is also a common stop for Korean soldiers on leave, who come to the city seeking affordable cuisine. Chuncheon is also home to five universities, creating an even higher number of budget-concerned diners; indeed, one of the original nicknames of dakgalbi was “university student’s galbi.” 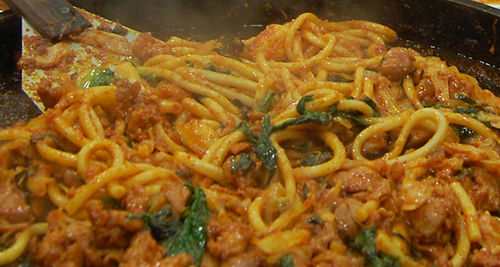 Dakgalbi’s origins stretch back to the late 1960s, when it was introduced as an affordable anju (a side dish for alcoholic drinks). Originally available in pubs on the outskirts of the city, over the years as it has become more refined it relocated to quality restaurants in a more central location.

The centralization of dakgalbi restaurants in one area gives the dish a backbone. It cements the city’s reputation as the best place to find dakgalbi, and the restaurants’ reputation for cooking it. Although there is competition among the clustered restaurants, there is also a great deal of coordination and cooperation.
“In order to prosper together, we need to cooperate,” said Kim Hee-jeong, owner of the Chuncheon Jungang Dakgalbi restaurant in the alley. She says that her restaurant takes part in an autumn festival along with the other restaurants of the alley. They also come together for an annual charity event to provide dakgalbi to the underprivileged. 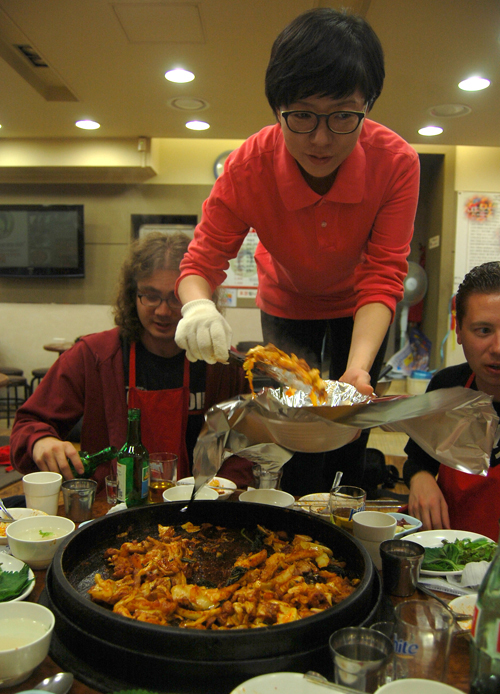 Chuncheon is easily accessible from across the country. By train, the Gyeongchun Line connects the city with Sangbong Station in Seoul. By road, the newly opened Seoul-Chuncheon Expressway makes the drive from Seoul easy, and the Jungang Expressway connects Chuncheon to the interior of Korea, stretching down to Daegu in the south. Myeongdong Dakgalbi Street is in front of City Hall, and can be found easily from there.