Seoul Cafés where Korean dramas use as a shooting location

Just once,,, I’ll say this just once, So listen up.

I like you. Whether you’re a man or an alien, I don’t care anymore.

I tried getting rid of my feelings, but I couldn’t….

It is the popular lines in the drama ‘The 1st Shop of Coffee Prince’. Choi Han-kyul(Gong Yoo) in this drama decided to love Go Eun-chan (Yoon Eun-hye), even though she is a man. (She is pretending as a man.) And they confirm their love each other. This scene happened in the café which Choi Han-kyul manages. Like this, the scene in cafés has become an important part in Korean drama.

These days, in Korean dramas, the main casts drink coffees a lot at the café. The scene of café is a regular scene in Korean drama. The cafés are usually used as the place main actors and actresses talk to each other or the main actor is operating by himself or the casts work for, etc. 10 years ago, the scene which characters talk in the café was shot in the inside filming site or just general coffee shop. However in recent years, in Korea, the café industry has been growing rapidly. In 2006, the numbers of cafés in Seoul were around 658. In 2011, not only it has increased seven and a half times, but also the café brands have diversified. The number of cafés is still being increased. For this reason, the café interior is getting refined and the places have settled as a culture not just simply spaces for people. In this reason now the café became an important supporting part in the drama. In effect, talking each other in the café is one of the important parts of drama’s flow. In 2007, the drama ‘The 1st Shop of Coffee Prince’ was shot at the café and that was the main shooting place. The drama is love story about Choi Han-kyul (Gong Yoo) who manages the café and Go Eun-chan (Yoon Eun-hye) who pretends like a man to work at the café. The drama was great success and after finishing the drama, many café brands started to become more common. Now the cafés are exposed for publicity through the drama.

From 10years ago, Hallyu, Korean wave, has been a boom in many countries through the drama ‘Winter Sonata’.

Do you know the drama ‘Winter Sonata’? I think you do, if you are interested in Korean drama. Although the drama is shot 10 years ago, many travelers are still visiting Korea such as Nami-Island, Petite France. Also, these days, they are visiting many cafés where the drama was shot as well. They take pictures the café recollecting the scenes of Korean drama and being lost in memories. The travelers, who visiting these cafés, are getting increased. The coffee which Jo In-sung had, the seat Lee Min-ho took a seat, the coffee shop Gong Yoo managed, etc.

So, in this time, I’m trying to introduce you about 10 café places where the drama shot in real. This is for you who like Korean drama. The places are usually near Gangnam, Hongdae, Sinchon, and Yeouido. For today, I will introduce ones located in near Hongdae and Sinchon.

And the last, it’s ‘Comic book café filled with the scent of a flower’ which shot through ‘My Love from the Star’ by Kim Soo-hyun, Jun Ji-hyun.

These are located conveniently in Seoul. You can visit there only by bus or subway; try to visit the when you visit Seoul. Also, let’s imagine and be a main actor, main actress in the drama. Plus, the tastes of coffees and desserts are also really good. You can take a rest with a cup of coffee there. 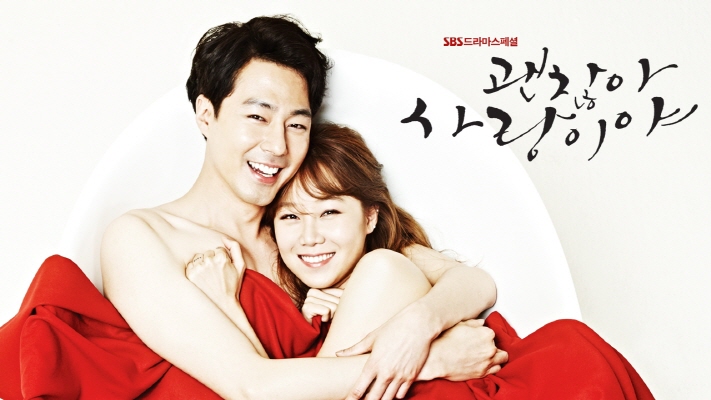 Jang Jae-Yeol(Jo In-sung) is a mystery bestselling writer and a radio DJ. He suffers from obsession. Ji Hae-Soo(Gong Hyo-jin) is going through her first year fellowship in psychiatry at a University Hospital. She chose psychiatry because she doesn’t want to perform surgeries. After she meets Jang Jae-Yeol, her life goes through big changes.
[By Asian Wiki]

Before broadcasting this drama, it was a big issue that Jo In-sung and Gong Hyo-jin meet as a leading actor and actress. The reason why they became an issue was both of them were really popular and many Koreans love them. So, people were looking forward to watching this drama and the result was success.

‘coffeesmith in Hongdae’ is the place where Jang Jae-Yeol(Jo In-sung) is managing and Park Soo-kwang (Lee Kwang-soo) is working for. This café is an important place in this drama that main episodes are contained. ‘coffeesmith in Hongdae’ is located in the middle of Hongdae Street. This café has wide open spaces and the interior is refined and very neat. So, this place is always crowded with many people and receives many attentions from broadcasting company related in drama. It is the front and back of the building located in the middle of Hongdae Street. The building is second story. When the weather is good, they open all the windows from the building and make people feel cool and enjoy drinking coffees. In my case, when I meet my friends of mine, I used to have a cup of coffee here with my friends. The day that I took pictures, the weather was really good. So I could see the people who read the book on a terrace, and talk each other with friends etc. The building is really huge and the wall is made by windshield glass. On the day I visited, they opened all windows so, I felt cool. Can you remind the specific scenes of drama in these pictures? It’s the place where Jo In-sung and Gong Hyo-jin led the story of drama. Let’s visit here ‘coffeesmith in Hongdae’.

Recently, in the drama, ‘The Girl who sees Smells’ by Park Yoo-chun, Shin Se-kyung, ‘coffeesmith in Hongdae’ was used as a drama filming location. When you order a cup of coffee there, you can get one with special cup holder written ‘The Girl who sees Smells’. These days, foreign fans’ visiting is increasing, because of ‘Park Yoo-Chun’. Let’s visit there and get a special cup holder. 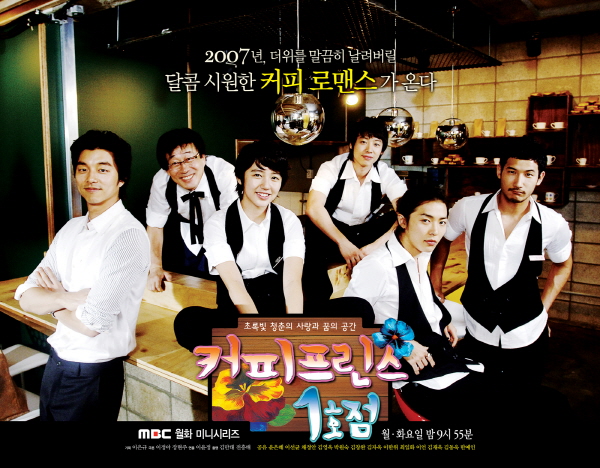 Coffee Prince’s Flagship Store is a TV series that revolves around the love life and dreams of four young people who meet together at a cafe.

Choi Han-gyeol (Gong Yoo) is a smart young man who hates to be tied down to one career in his life. Abhorring the idea of joining the family business, he is ordered by his grandmother to manage a cafe. Unable to disobey his grandmother, he reluctantly takes over the responsibility of running a cafe and begins to immerse himself in the gourmet coffee business. One day, he meets Go Eun-chan (Yoon Eun-hye), a cheerful girl who has an unpredictable personality, and learns the meaning of true love.
[By Asian Wiki]

This drama had generated a lot of talk in 2007. Choi Han-gyeol (Gong Yoo) in this drama was such a charming actor and the acting skill of other casts was also really great. At that time, when the drama was being broadcasted, in front of the café, it was always crowded with people. I was a big fan of this drama either and have watched over three times.

As the plot written above, ‘The 1st Shop of Coffee Prince’ is being managed by Choi Han-gyeol (Gong Yoo). So, this café was the main shooting location that conflict and reconciliation and even love story are all contained between Choi Han-gyeol and Go Eun-chan. Also, pretty boy staffs, who are working for, gave more fun. The exterior of Coffee Prince The interior of Coffee Prince

Although I was also a huge fan of this drama, but it’s the first time that I visited. When I came inside finally, it reminded me of many drama scenes. Each spots where casts led stories was reminded as well. Although it’s been around 8years that the drama finished, still many foreign travelers visited this café. If you want to feel the love story between Choi Han-gyeol and Go Eun-chan, let’s visit once.

For your information, if you go inside only for taking pictures, you will be refused. You should drink at least a cup of coffee, then you can take many pictures as many as you want. The price of coffer is expensive. The Americano is 6,000KRW and lemonade is 8,000KRW.

The 1st Shop of Coffee Prince in Hongdae

Do Min-Joon(Kim Soo-hyun) is an alien who landed on Earth 400 years ago during the Joseon Dynasty period. Do Min-Joon possesses a near perfect appearance and enhanced physical abilities involving his vision, hearing and speed.

Do Min-Joon holds a cynical view to human beings, but he falls in love with actress Cheon Song-Yi(Jun Ji-hyun) who is a top actress in the modern era.

This drama was also a big issue in Korea and other countries. Jun Ji-hyun is a top actress in Korea over 10 years and Kim Soo-hyun’s television career just began from 2007. So, the meeting between two of them was an issue as a leading actor and actress. The story was unusual and the acting skill of casts was also great. And all the things like clothes, lipstick, accessories, that Jun Ji-hyun had, were sold out right after the drama broadcasted.  For this reason, it became a highly influential drama not only Korea, but also other countries such as China and Japan. 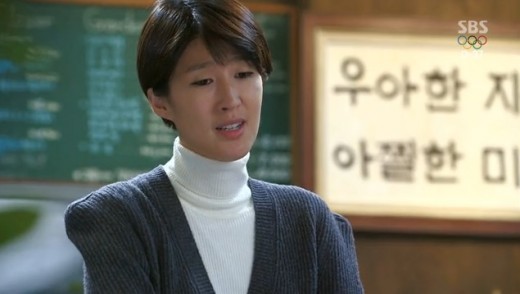 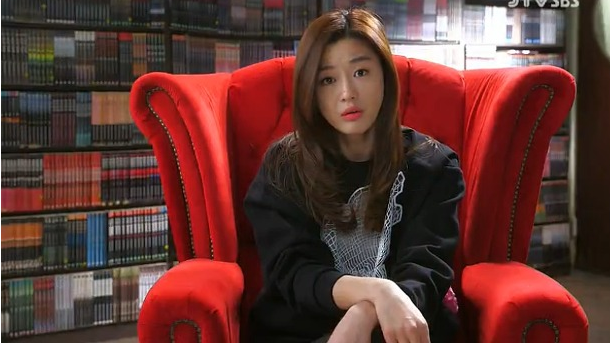 This comic book café in the drama was managed by Ms. Hong who is a friend of Cheon Song-Yi. Cheon Song-Yi often visits this café and talks about her worries about love and spends time reading comic books. This café is located near Sinchon’s ‘Pedestrian-Friendly Street’. It’s all the same in the drama. There was a red sofa that she talked about worries of love with Do Min-Joon. The comic books in this café are all Korean. If you can read Korean even little bit, try to read that such as Cheon Song-Yi. In this café, there are many kinds of soft drinks, Korean noodles (Ramen), cookies, etc. So, you can spend free time with comic books and some snacks.

Comic book Café filled with the scent of a flower

Until now, we looked into 3 cafés ‘coffee smith in Hongdae, ‘The 1st Shop of Coffee Prince in Hongdae’ and ‘Comic book Café filled with the scent of a flower in Sinchon’.

Was it interesting? I think you are. I love Jo In-sung, Gong Yoo and Kim Soo-hyun and I’m sure you are the same with me. Try to visit there. It must be good memories during traveling Korea.

Actually, there are more cafés that used as drama shooting places in Gangnam and near Yeouido. I will introduce you the rest of cafés later such as Lee Min-ho had in the drama. Please look forward to it!

Also, I will post the popular ‘Sinchon Street’ and ‘Hongdae Street’ near the cafés above soon. So, after visiting cafés above, try to visit these streets as well. It is a hot place among not only young people in Korea, but also foreign traveler. You can look forward to it as well.