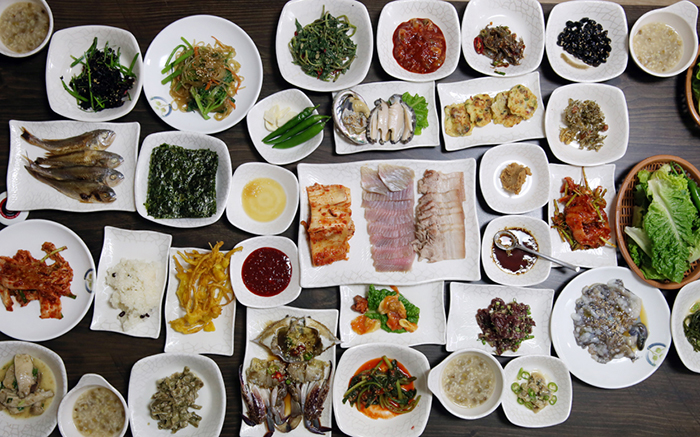 Namdo hanjeongsik, or southern Korea’s traditional dining, showcases the range of tastes and flavors found in dishes from the southern regions of the Korean Peninsula.

In Korean, the word Namdo refers to the southern provincial areas south of Gyeonggi-do (Gyeonggi Province): the provinces of Chungcheong, Jeolla, Gyeongsang and Jeju. When it comes to Namdo, many people think of food, especially food from Jeollanam-do (South Jeolla Province). This is because South Jeolla has a variety of unique and delicious native recipes. Abundant ingredients produced from the mountains, seas and fertile fields helped the creation of such a food culture, with richness and diversity.

For those who love to travel and enjoy local dishes, the southern regions of the country must be at the top of any travel itinerary. In the past less-convenient public transport was a burden when making plans. However, thanks to the opening of the Honam High Speed Railway, the region is so close that people can depart Seoul in the morning and arrive in the south and have lunch in the afternoon.

Some of the unmissable dishes among Namdo cuisine can be found in Naju City and Gangjin County. These include Naju beef soup (gomtang), the first dish that comes to mind for many people when thinking of Naju. There is also raw or fermented skate (hongeo), often known for being one of main ingredients in the “Harmonious Trinity” (Samhap). There is also southern Korea’s table d’hôte (Namdo hanjeongsik), fresh seafood and fish stew made from mudskippers (jjang-ttung eoh-tang). 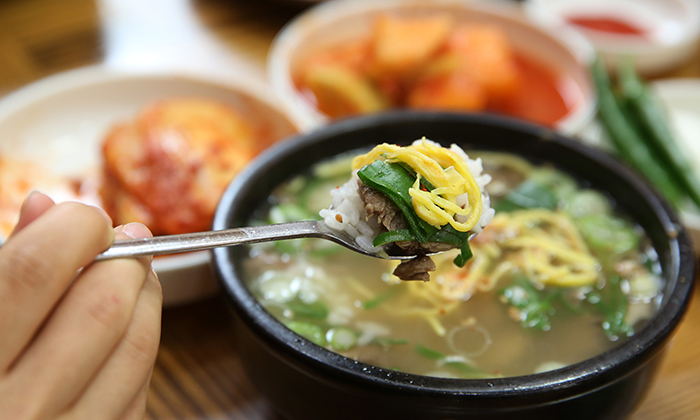 Characterized as having a light and clean taste, Naju beef soup is one of the must-eat menu items for people visiting Naju City.

Beef soup, or gomtang, is also known as gomguk. It is one of the yummiest tangs or stews for many people. People say that their mother or wife cooked a huge pot of gomguk for the family but then went away, travelling. The sign “bear soup” stunned some overseas tourists in Seoul, and the mistranslated name gomguk has stuck for the past 20 years or so. Of the many varieties of the dish, Naju gomtang is considered the best among gourmets who even granted the name of the city to this delicious meal. 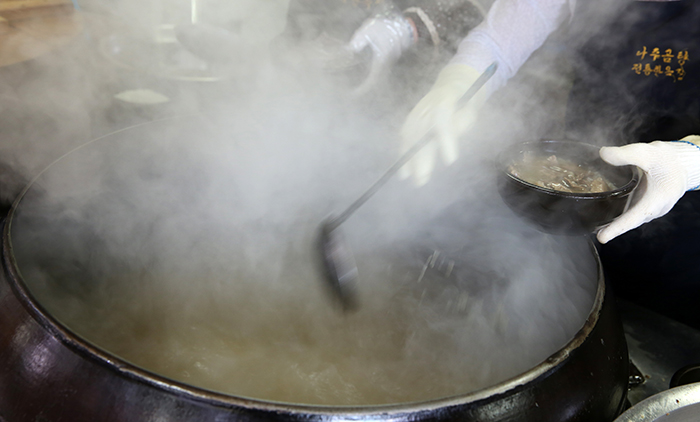 Naju gomtang is boiled for a long time in a large cauldron to make a clean soup. The dish is served with rice in the soup.

Naju City is most famous for the Geumseonggwan, an inn used by government officials during Goryeo (918 – 1392) and Joseon (1392-1910) times. In front of the Geumseonggwan, the strings of Naju gomtang restaurants are lined up along the so-called “Gomtang Street.” All the restaurants are crowded with diners. At some of the more popular restaurants, people are even willing to wait for a seat, hungrily holding their number in their hands. Naju gomtang soup is made from bones, plate, flank and shank, which are boiled for a long time. Rice is put into the soup. Upon eating the meal with rice, meat and diced radish kimchi (kkakdugi), people can finish a whole bowl in one sitting. During the weekend, tour buses line up in front of “Gomtang Street” with people visiting the city just to taste Naju gomtang, says the Naju City government. 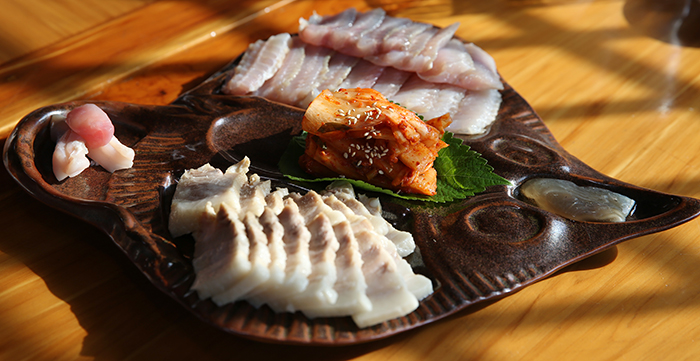 Once sampling the unique taste of fermented or raw skate (hongeo), anyone can become a devotee. The “Harmonious Trinity” (“Samhap”) is made up of hongeo, steamed pork and ripened kimchi (mugeunji).

Another must-visit place, along with “Gomtang Street” in Naju, is “Hongeo Street” in Yeongsanpo. In late Goryeo times, the people who lived on Heuksando Island came to Yeongsanpo along the Yeognsangang River, today’s Yeongsan-dong neighborhood of Naju. They used to enjoy fermented skate and carried the meal with them during the not-so-short voyage, allowing the skate to ferment naturally. The pungent taste of the fermented fish then attracted others. The natural fermentation process for skate remained thus for many years. Due to the singularity of the dish, one either likes or dislikes it, even among native-born Naju residents. People in the city say that hongeo must be enjoyed with the traditional rice beer makgeoli. 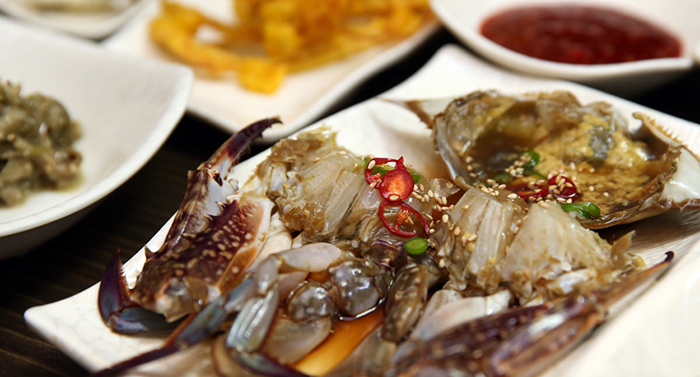 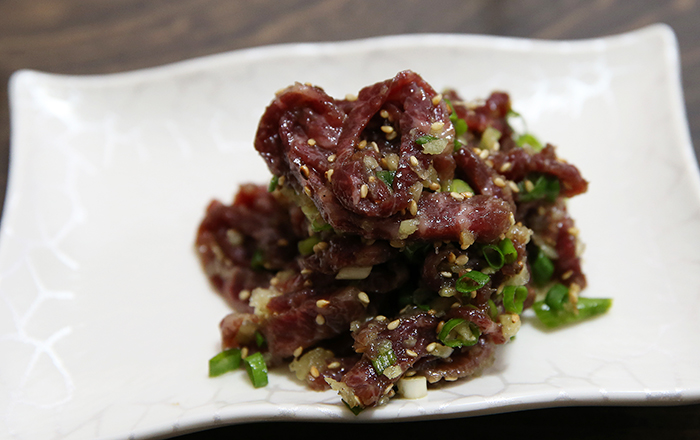 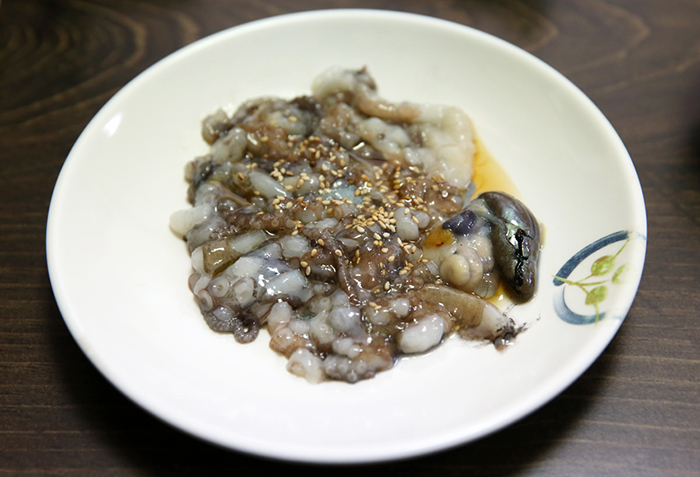 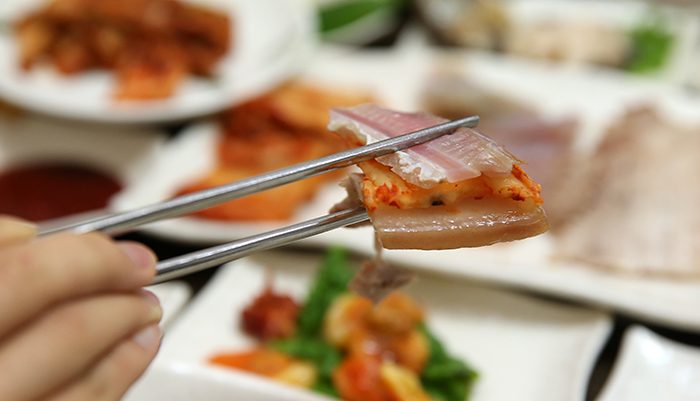 Each of the side dishes served with southern Korea’s table d’hôte is good enough to be a main dish all by itself. The above photos from the top show crabs marinated in soy sauce (ganjang gejang) (top), raw beef (yukhoe), live octopus (sannakji) and the ‘Harmonious Trinity’ of fermented skate, steamed pork and ripened kimchi.

People often use the expression, “상다리가 휘어진다” (Sang-da-ri-ga Hwi-eoh-jin-da), which means that the table is so loaded with food that the table legs are beginning to buckle. Southern Korea’s table d’hôte can make this come true.

This is especially surprising for people who are visiting a restaurant in Namdo for the first time. They happily count the number of side dishes on the table, and announce that they are, “Already full, just seeing the dishes being continuously served.”

In Seoul or other areas of the country, each of the side dishes served on the table, such as raw beef (yukhoe), live octopus (sannakji), the “Harmonious Trinity” (“Samhap“) of fermented skate, steamed pork and ripened kimchi, the crabs marinated in soy sauce (ganjang gejang), or raw abalone, are all good enough to be a main dish by themselves. Southern Korea’s table d’hôte (Namdo hanjeongsik) truly represents the diversity of taste found in Korean cuisine. Normally, a table d’hôte is served for four people. Though the number of side dishes can vary depending on the season, as dishes and side dishes are served one after the other, it creates an unusual scene on the table as empty plates get stacked upon each other. 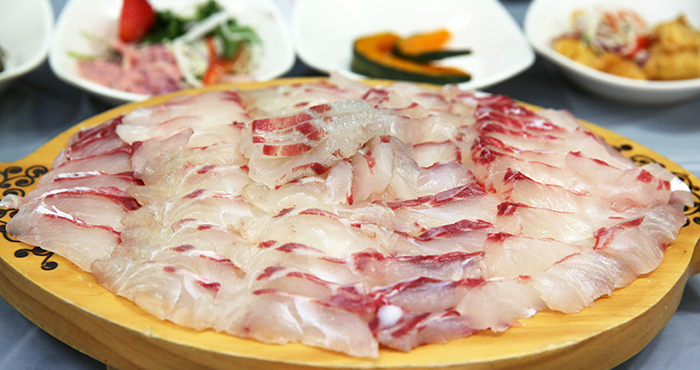 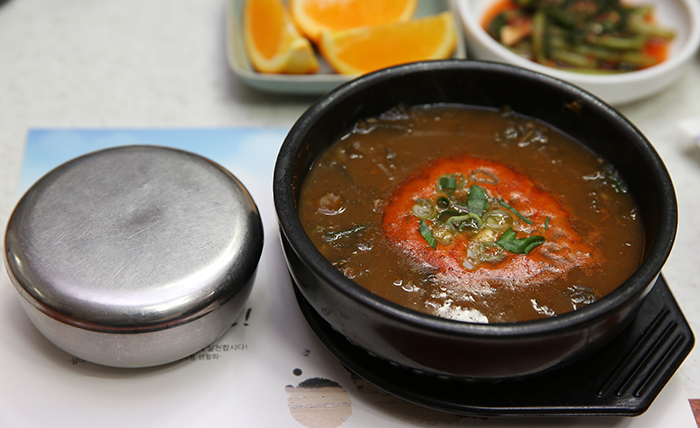 Fish stew made of mudskippers (jjang-ttung eoh-tang) is the No. 1 dish for people in Gangjin first thing in the morning, to ease a hangover after a heavy bout of drinking the night before. This dish is one of the representative local delicacies of South Jeolla Province.