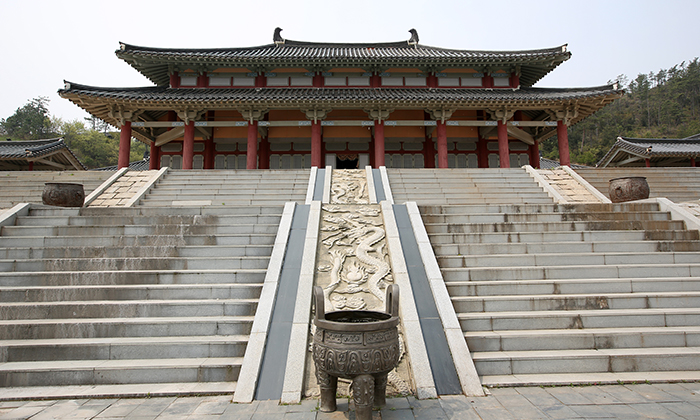 A model of a Goguryeo palace can be found at the Naju Image Theme Park.

Naju is home to a village that is surrounded by Goguryeo palaces and fortresses. This is the Naju Image Theme Park, where the soap operas “Jumong” and “Kingdom of the Winds” were filmed. Located in the southwestern parts of the country, the city of Naju was occupied by the Baekje Kingdom during Korea’s Three Kingdoms Period (57 B.C.-A.D. 668). First-time visitors to the theme park can reflect on the nation’s history and may have questions about the Goguryeo-style architecture.

Naju itself doesn’t have much to do with actual Goguryeo history. Following both Korea’s Three Kingdoms Period and the Unified Silla Period (668-935), Naju was a stronghold for the Goryeo Dynasty (918-1392). It was in Naju that Sambong Jeong Do-jeon, who played a critical role in founding Joseon (1392-1910), conceived of the idea to build a new capital. 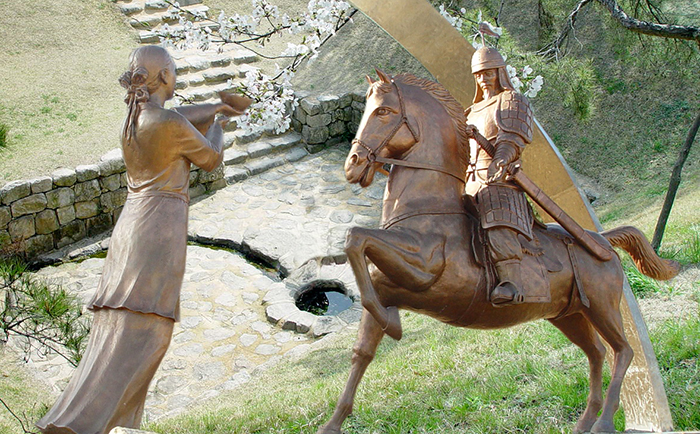 Two statues along the Wansacheon Stream in Naju tell the love story of King Taejo Wang Geon (877-943), founder of Goryeo, and Empress Janghwa of the Oh clan. The story goes that she set afloat a willow leaf in a water bottle that Taejo, then a general, was drinking from so that he could slow down during the war.

Based in Naju, the Oh clan played a key role in the foundation of Goryeo during Korea’s Later Three Kingdoms Period (892-936). The clan’s descendents were responsible for the management of the Yeongsangang River, a major transportation and shipping channel. The family got its daughter married to Taejo and supported the foundation of the new Goryeo kingdom. She gave birth to the future King Hyejong, the second monarch of the dynasty, and was conferred with the title of “empress.” 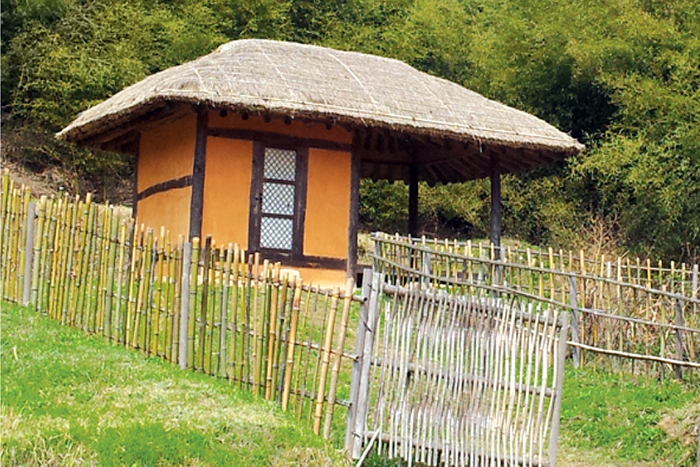 A thatched roofed house is discovered in Sojae-dong in Naju. It was built in honor of Sambong Jeong Do-jeon who was exiled to Naju for three years. He established the political ideas and philosophies used to run the new Joseon nation.

In late Goryeo times while exiled in Naju, Sambong was firmly convinced that he needed to give up on Goryeo and found a new kingdom. He supported Yi Seong-gye, who became King Taejo, the first Joseon monarch, and succeeded in founding the Joseon kingdom.

Over the past 1,000 years, Naju has had a lot to do with many important occasions throughout Korean history. There are a number of historical sites and relics representing Naju’s historical relevancy. Among them is the ginkgo tree grown on the grounds of the Naju hyanggyo, a Confucian academy. It’s said to have been planted by King Taejo himself. There is a thatched roofed house in Sojae-dong, too, where Sambong was said to have been exiled. 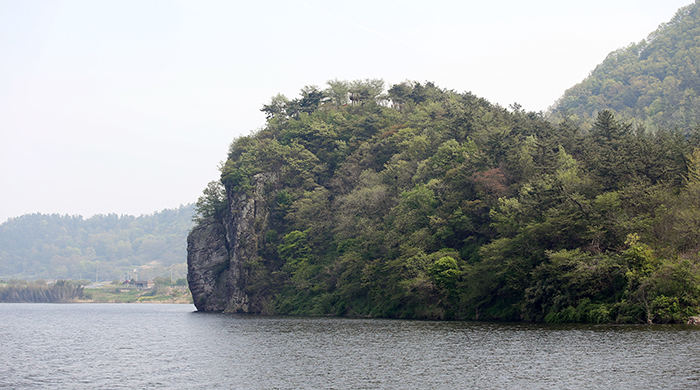 The myth says that Arangsa and Abisa fell in love with each other in the vicinity of the Yeongsangang River during Korea’s Three Kingdoms Period (57 B.C.-A.D. 668). In jealousy, young villagers threw Abisa into the river, but she was brought to life in the form of a giant snake. Alas, then both of them fell into the river near the Angam Rock (pictured). This area is known for its rapid currents which have overturned numerous riverboats. 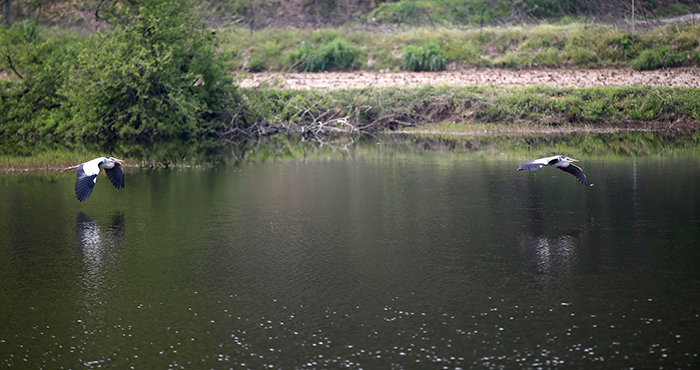 A group of herons flies low over the Yeongsangang River.

There are a variety of things to see and do in Naju, more than just the written record of history. Surrounding the Angam Rock, where a love story is said to have taken place, a group of herons can be seen from time to time. There are also fishermen and fishing boats floating along the Yeongsangang River, still an important thoroughfare for many local people.

The Dorae Hanok Village is one of the most popular tourist attractions. Still lived in by locals, the solar power panel creates a sharp contrast between the past and modernity.

Located in Dado-myeon in Naju, the Dorae Hanok Village gives visitors a chance to learn about the wisdom of the past and modern civilization that changes the landscape quite a bit. Near the village is the Jeonnam Forest Resource Research Institute, popular among visitors who wish to fully enjoy nature. Metasequoia Lane at the institute, in particular, is one of the most beloved places for picnics. Under the green canopy, adults want to run around the beautiful park like a child. 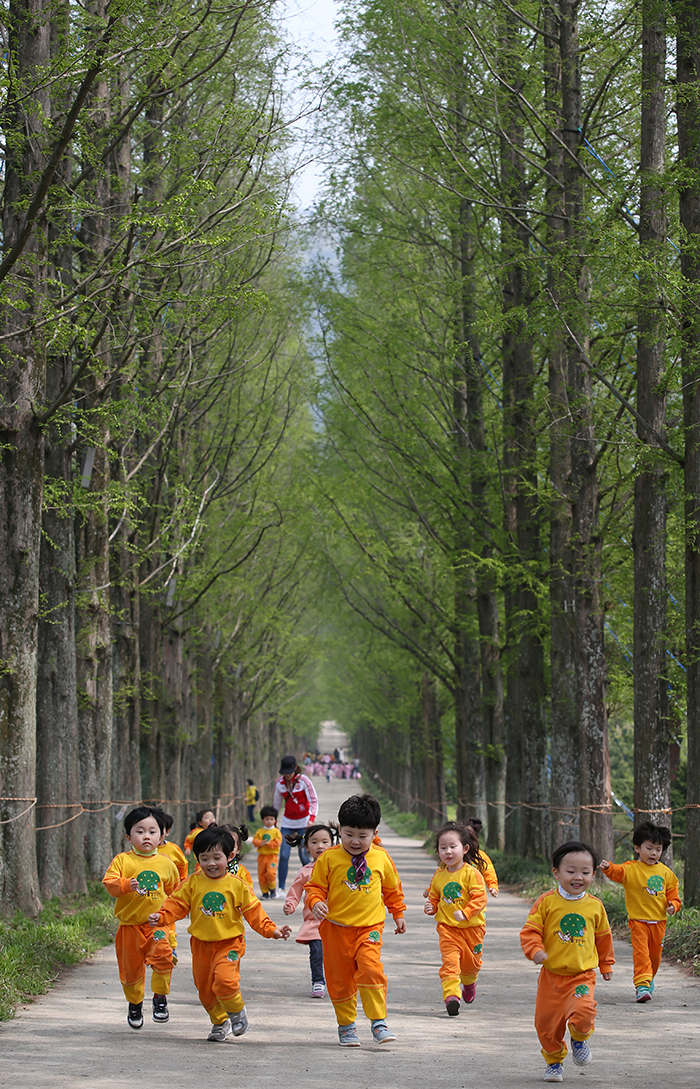 Kids smile as they race up and down Metasequoia Lane. 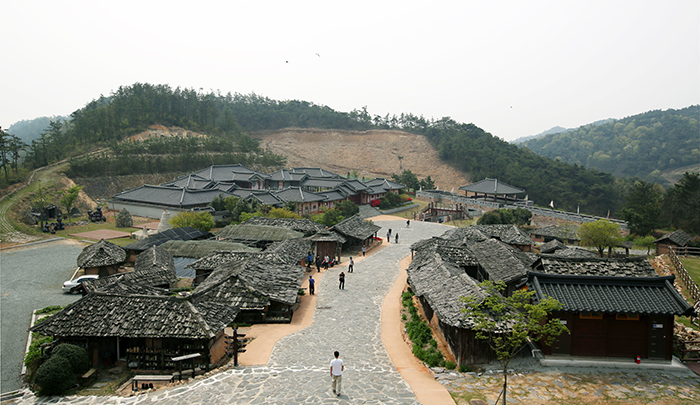 The Naju Image Theme Park is one of the most sought-after locations to film historic soap operas, especially those set in Goguryeo (37 B.C.-A.D. 668) and Baekje (18 B.C.-A.D. 660) times. The park is surrounded by some 95 buildings.