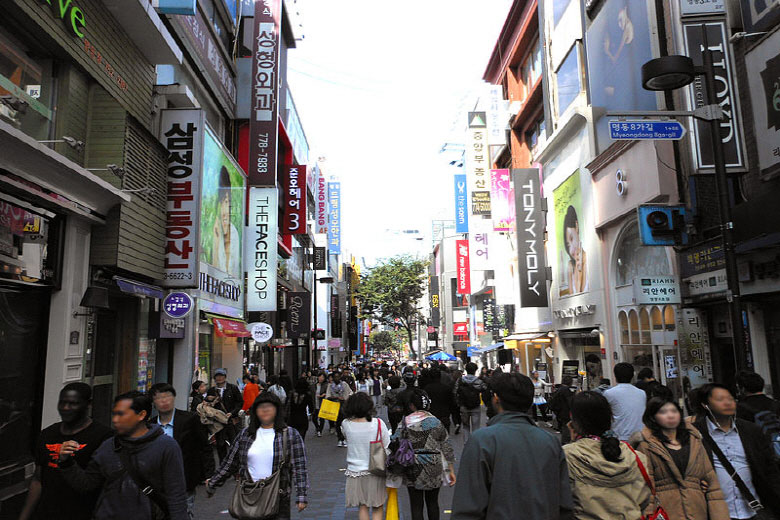 Myeongdong is a dong in Jung-gu, Seoul, South Korea between Chungmu-ro, Eulji-ro, and Namdaemun-ro. It covers 0.99 km² with a population of 3,529 and is mostly a commercial area, being one of Seoul’s main shopping and tourism districts.In 2011 and 2012, Myeong-dong was listed as the ninth most expensive shopping street in the world.

Myeondong when Korea was under direct Japanese ruleMyeongdong dates back to the Joseon Dynasty when it was called Myeongryebang (Hangul: ｸ昞ﾊｹ・ Hanja: ﾙ･ﾖﾉﾛｩ) and mostly a residential area. During the Japanese era the name was changed to Myeongchijeong (Hangul: ｸ朗｡ﾁ､; Hanja: ﾙ･・) and became more of a commercial district, being influenced by the rising commerce in the neighboring Chungmuro area. It became the official district of Myeongdong in 1946, after independence.After the Korean War and into the 1960s, the economy blossomed and the financial sector from Namdaemun-ro and Euljiro gradually expanded into Myeongdong. The area flourished as city renovations took place and highrise buildings were built. Many department stores, shopping centers, restaurants, upscale shops and boutiques set up their businesses in Myeongdong and it became the mecca for the young and trendy in the 1970s.Besides being a major commercial and financial district, Myeongdong has been a popular location for political demonstrations and protests, especially during the turbulent years of the 1980s and 1990s. Myeongdong Cathedral has been a frequent spot for many of these demonstrations and still is to this day.As of March 2000, Myeongdong’s has been designated as a special Tourism Promotion Area and is one of the stops on the official Seoul City Bus tour’s main route.

The skincare/comestic retailer Nature Republic storefront in 2012Myeongdong is one of Seoul｡ｯs main shopping districts featuring mid-to-high priced retail stores and international brand outlets, including Lacoste, Polo Ralph Lauren, Forever 21, Bulgari and Louis Vuitton, as well as Korean cosmetics brands such as Nature Republic, Missha, The Face Shop and Skin Food. It is a particularly popular area for young people and tourists as a center for fashion and sight-seeing. Several large shopping centers and department stores are in the district including Lotte Department Store, Shinsegae Department Store, Migliore, M Plaza, and Noon Square. The floating population of Myeongdong is estimated to be around 2 million a day and in terms of floorspace rents, Myeongdong is one of the most expensive shopping districts in the world. Many hotels, restaurants, cinemas, theaters, and historical sites complete the diverse mixture of the area. In a poll of nearly 2,000 foreign visitors, conducted by the Seoul Metropolitan Government in November 2011, stated that 13.4 percent named shopping in Myeongdong as their favorite activity in Seoul.Business district of Seoul’s representative to the areas of the service industry, retail and financial services. · Namsandong the dong 1 Chungmuro 1.2 and Myeongdong 1.2 1.2 · 3 · yejangdong beopjeongdong was automatically Area is 0.99 ｧｴ, a population of 2,8016 patients (2008). Cultural property as a historic cathedral (258).

The southern part of Myeongdong is served by Station #424, Myeong-dong on Line 4 Line 4 of the Seoul Subway, while the northern area is closer to Line 2Station #202, Euljiro 1-ga on Line 2. Many inner and outer city bus lines pass through the district for easy access.