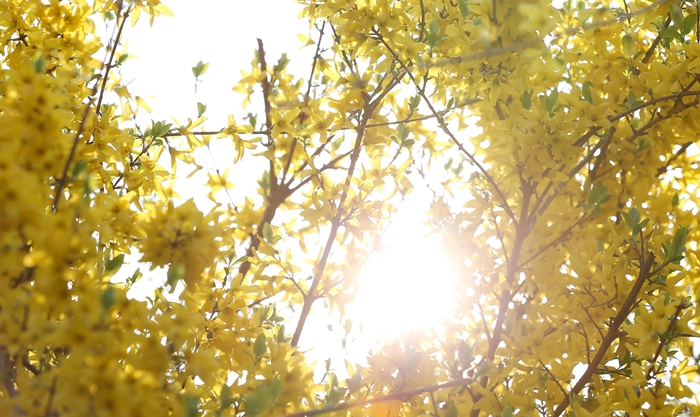 Forsythias, azaleas and cherry blossoms this year will bloom three to five days earlier than in an average year.

Spring has arrived in Korea considerably ahead of schedule.

Gyeongchip, the day when frogs wake from their hibernation among the 24 solar terms of the year as determined by the celestial longitude of the sun, is on March 6. Yet the weather in Korea feels like spring.

The Korea Meteorological Administration defines the first day of spring as being among “nine consecutive days with an average temperature of over 5 degrees Celsius that never falls.” According to this definition, spring this year began on Feb. 23, 11 days earlier than last year.

Thus the trio of Korean spring flowers — the forsythia, azalea and cherry blossom — will bloom three to five days earlier than in an average year.

According to the weather forecasters Kweather and Weatheri, forsythias will start to bloom from March 11 on Jeju-do Island, five days earlier than last year. Starting to bloom from the country’s southern region, the flower will make its way up to Seoul by March 24 to create yellow street scenes.

Azaleas will start to bloom on March 15 in southern parts such as Jeju-do Island, Busan and Gyeongsangnam-do Province, and reach the central region in late March and early April.

Cherry blossoms will appear first on Jeju-do Island from March 22 and bloom in the central region from April 2–9. They will reach the northern part of Gyeonggi-do Province and Gangwon-do Province after April 9. Seoul will see the flowers bloom from April 4–5 and they should peak around April 12. 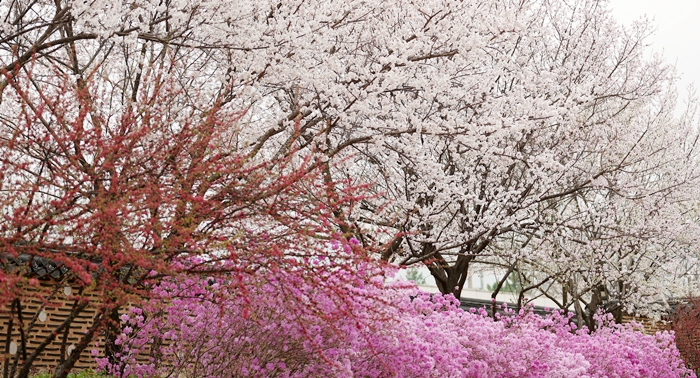 Cherry blossoms and azaleas are in full bloom at the National Museum of Korea in Seoul.