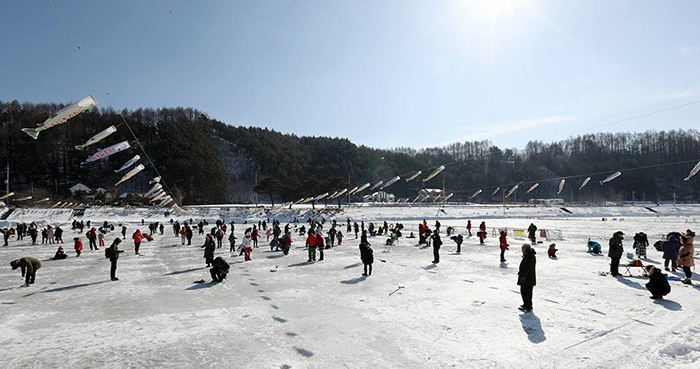 Visitors can go ice-fishing for trout at the annual Pyeongchang Trout Festival, on the frozen Odaecheon River in Jinbu-myeon Town in Pyeongchang, Gangwon-do Province.

The snow-capped city of Pyeongchang in Gangwon-do Province is not only the host of the PyeongChang 2018 Olympic and Paralympic Winter Games, but it is also the venue for a number of winter festivals filled with a flurry of festivities.

This past weekend in Pyeongchang, in the midst of several test events in the runup to next year’s Olympics, visitors were able to enjoy two annual festivals that showcased the unique traditions of the snowy region.

The Pyeongchang Trout Festival (평창송어축제), which kicked off on Dec. 31, takes place in the town of Jinbu-myeon in Pyeongchang-gun County, right atop the frozen Odaecheon River. Ice-fishing for trout is the main attraction, for children and adults alike.

All you need to do is to throw a fishing line with bait into the opening in the ice and wait for the trout to bite, before snatching it back to the surface. Even novice fishermen can try their luck at the festival to great success. On Feb. 3, actor Jonathan Bennett, who was there with a film crew from NBC, managed to catch two trout on his first-ever attempt at ice-fishing. “You can actually see the bottom of the river and the fish swimming around, looking at the bait. I just caught my first fish in Korea. I get why people get addicted to ice-fishing,” he said with a big smile. 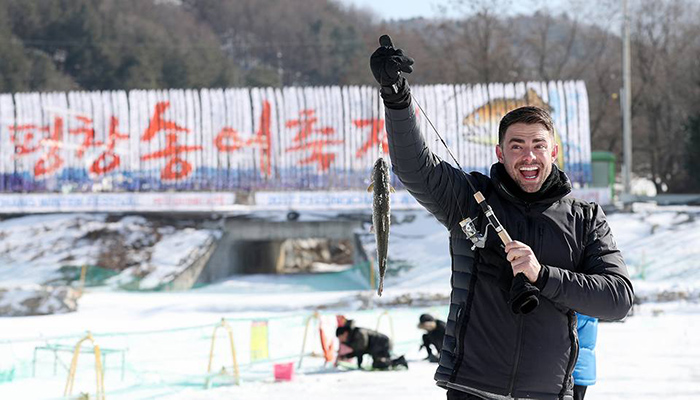 Actor Jonathan Bennett catches his first fish at the Pyeongchang Trout Festival, during a shoot with a film crew from NBC, on Feb. 3 in Pyeongchang, Gangwon-do Province.

Once you’ve caught some trout, you can get it gutted and cleaned for KRW 3,000 and have it prepared raw or grilled on the spot. “Compared to the fish at other festivals, the trout here are bigger and more delicious. I’ve been coming to the festival every year for the past eight years with my family,” said Kim Seong Ryeong, a businessman from Onyang, Chungcheongnam-do Province.

“High altitudes and the clear waters of Pyeongchang make it an ideal location for trout farming,” said Lim Jong Seok, a marketing rep from the Pyeongchang Trout Festival Organizing Committee. “The annual festival is quite popular, and attracts more than 500,000 visitors each year,” he said.

The trout festival, which continues until Feb. 12, runs from 9 a.m. to 5 p.m. daily. Reservations need to be made online to fish inside a small tent for KRW 25,000. Regular outdoor fishing costs KRW 13,000 for adults and KRW 10,000 for elementary school students. 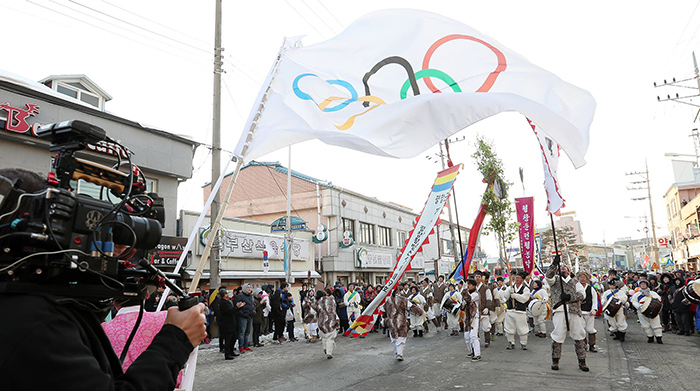 The annual Daegwallyeong Snow Festival kicks off on Feb. 3 in Pyeongchang, Gangwon-do Province, one of the host-cities of the PyeongChang 2018 Olympic and Paralympic Winter Games. A giant flag bearing the Olympic rings leads a street parade filled with music and dance.

In the neighboring town of Daegwallyeong-myeon, the Daegwallyeong Snow Festival (대관령 눈꽃축제) kicked off on Feb. 3 with an exciting street parade featuring local artisans, musicians and performers.

The highlight of the opening ceremony was a reenactment of the Hwangbyeongsan Mountain hunting ritual, which was practiced in the region over many centuries. The ritual was performed during the coldest days of winter, when wild animals would climb down from the mountain located just north of Daegwallyeong. 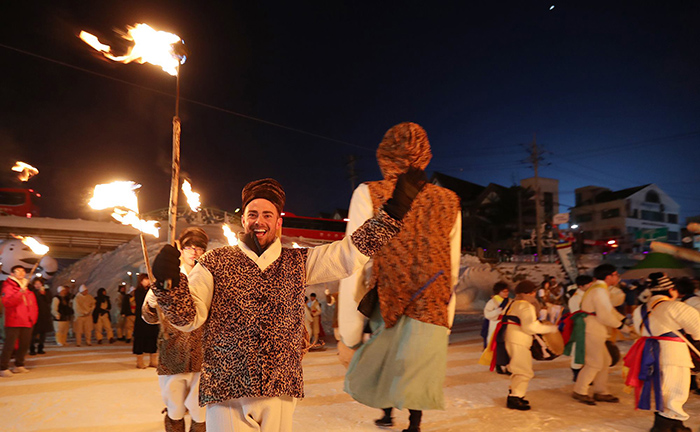 The annual Daegwallyeong Snow Festival kicks off on Feb. 3 in Pyeongchang, Gangwon-do Province, one of the host-cities of the PyeongChang 2018 Olympic and Paralympic Winter Games. Actor Jonathan Bennett, who was at the festival with an NBC film crew, participates in the Hwangbyeongsan Mountain hunting ritual, dressed in traditional garments.

The festival, which continues until Feb. 12, also has a snow sculpture garden where visitors can take pictures with Soohorang and Bandabi, the PyeongChang Olympics and Paralympics mascots.

Finally, in the far corner of the festival, visitors can have a go at a winter Olympic sport, like curling, and ride a snow sled across the ice.