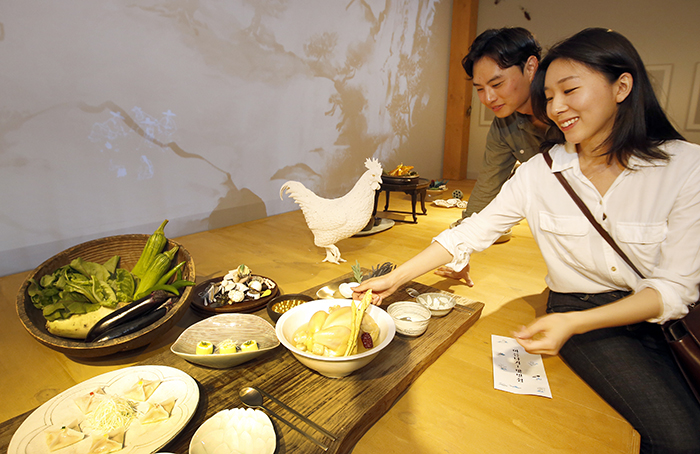 Visitors browse some of the invigorating dishes that ancient people used to enjoy in the summer, at the ‘One Summer Day’s Repose: Taste, Palate & Healing’ exhibition currently underway at the National Folk Museum of Korea.

With no air conditioners or electronic fans, how did our ancestors stand the sizzling summer heat?

A special exhibition currently underway at the National Folk Museum of Korea lends some answers to that question. Kicking off on July 20, the “One Summer Day’s Repose: Taste, Palate & Healing” exhibition puts under the spotlight the wisdom of life and some tricks that our forebears used to endure the summer heat. The exhibit brings to life some of the foods that they enjoyed in the summertime, and day-to-day artifacts that they used in their lives. The museum’s air conditioning also gives museum-goers a brief respite from the day’s heat wave, and allows them to take a look at a set of modern artifacts in a traditional, cool Hanok home.

In the first section, “Taste,” there’s an image of an elderly woman making a fire in the furnace and cooking some rice, welcoming visitors to the exhibit. The space is filled with inviting sounds of cutting, chopping and simmering. On display is a set of dishes that have been enjoyed throughout time immemorial and which are known to invigorate the stamina, such as samgyetang, a hearty bowl of ginseng chicken soup, mineotang, a spicy croaker fish soup, and eomandu, a fish dumpling filled with meat, mushrooms and other vegetables. The dishes are all carefully placed on a table already set.

Video clips projected onto the wall or onto the surface of a long table not only bring visual delight to viewers, but also help them to get a better understanding of each exhibit. Physical documents, including the “Eumsik Dimibang” (음식디미방, 飮食知味方), the first Korean-language cook book written around 1670, and, also, a book about alcoholic beverages normally brewed in the summertime, are also on exhibit. Visitors check out the ‘media table’ with its touch-screen surface that shows how to cook a range of summer dishes. The ‘One Summer Day’s Repose: Taste, Palate & Healing’ exhibition, currently underway at the National Folk Museum of Korea, with the help of visual materials, introduces some summer dishes that were enjoyed by our ancestors.

In the “Palate” section, a variety of summer dishes, including spicy croaker fish soup, chilled cucumber soup and young radish kimchi, emerge on screen as they’re served up in porcelain, glass and metal tableware and as the table is set.

In line with the old saying “Fight the heat with the heat” (이열치열, 以熱治熱), some of the dishes featured here represent traditional customs, known as bokdalim (복달임), whereby our ancestors ate hearty soups so as to “recover” from their weakened “vigor” due to the heat.

Finally, the “Healing” section is set up in a 250-year-old traditional Hanok home outside the museum. A series of craftworks designed for daily use, including tableware and flowerpots, are on display there. The Hanok will also host programs that allow visitors to cook themselves and to taste some of the most-beloved summer dishes, including chogyetang, a chilled chicken soup, cold bean-soup noodles and fruit salads. A Hanok home outside the National Folk Museum of Korea has an exhibit of handcrafted tableware that was used to hold and cook food, as well as flowerpots. It’s part of the ongoing ‘One Summer Day’s Repose: Taste, Palate & Healing’ exhibition.

Museum-goers take a look at tableware on display at the ‘One Summer Day’s Repose: Taste, Palate & Healing’ exhibition.

“This exhibition does more than just show visitors some exhibits. It walks them through the process of how food was cooked and also invites them to participate in the cooking process, in person,” said museum Director Cheon Jingi.

The exhibition will continue until Aug. 22 and is free of charge.