Psy is back with a new album.
He released his seventh album on Dec. 2. It’s been three years and five months since his sixth album, which included the international hit song “Gangnam Style.” 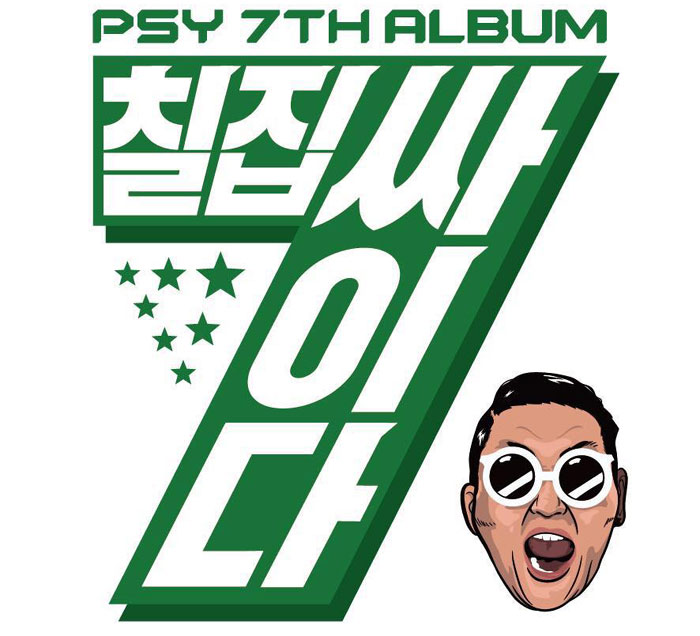 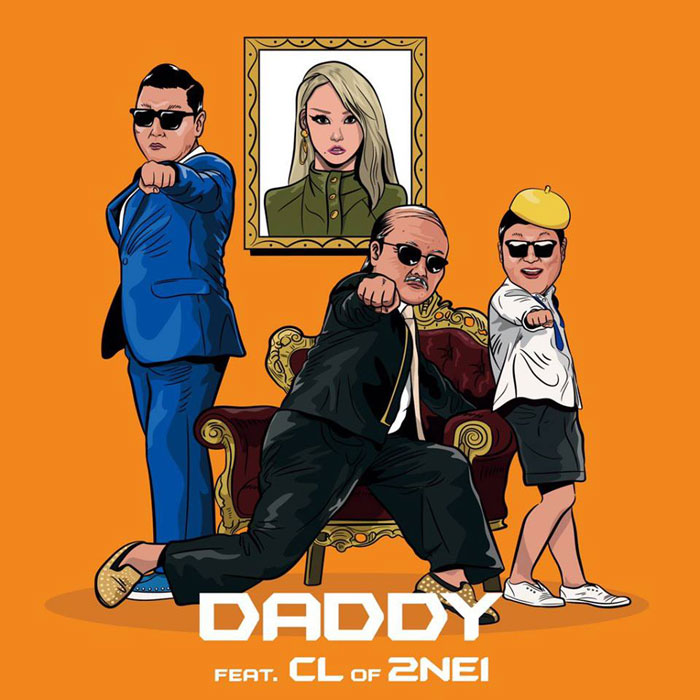 The single ‘Daddy’ is off of Psy’s newest album.

On Dec. 2, at the Mnet Asian Music Awards (MAMA), one of the largest music festivals in Asia, Psy gave a live performance of his songs “Napal Baji” and “Daddy,” both off his new album. They brought the whole audience to its feet. See the YouTube footage here: https://youtu.be/aQSeSoDjEG. 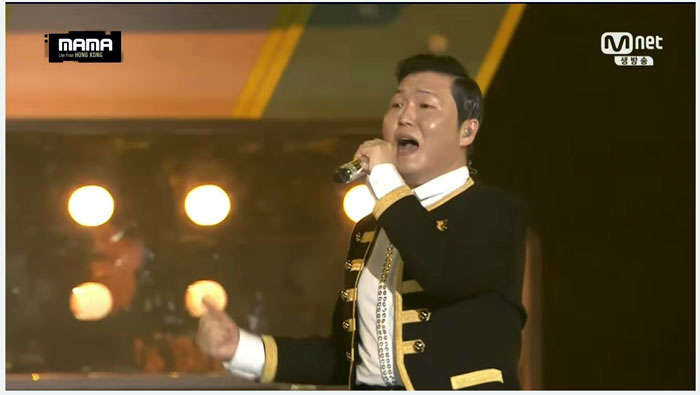 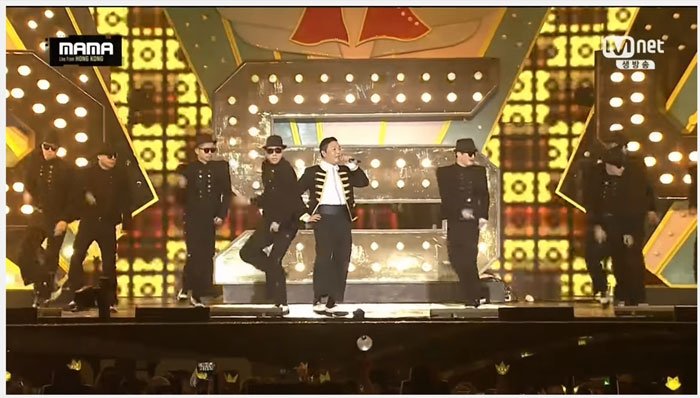 One day earlier, Psy showcased video clips for the two new hits off his new album — “Napal Baji” and “Daddy” — where he danced disco while wearing retro purple bellbottoms. His videos entertain his fans around the world, especially when he plays a child, father and grandfather, and dances together. Since its release on Dec. 1, the video clip of “Daddy,” in particular, recorded more than 31 million hits as of Dec. 7, proving the great interest in his songs. 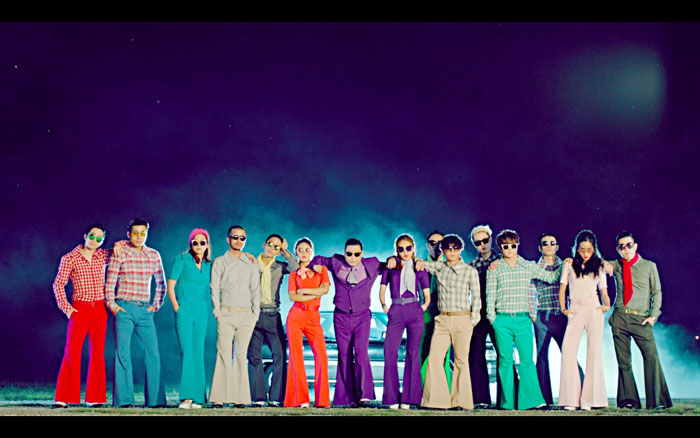 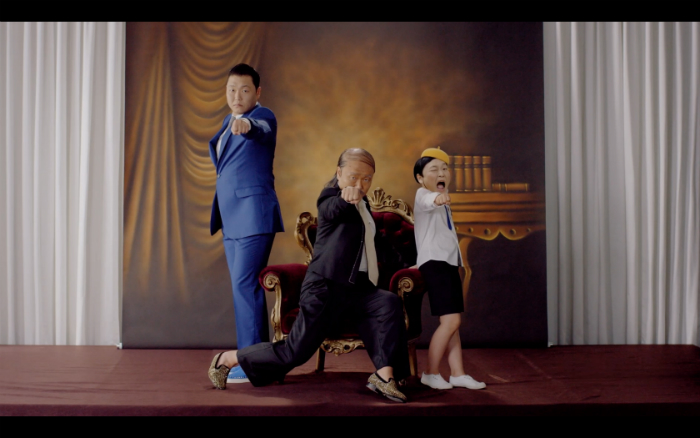 Psy releases videos for ‘Napal Baji’ (top) and ‘Daddy’ through his official YouTube channel on Dec. 1.

Dance songs are not everything on his new album, though.
Comprised of nine songs, the album covers a variety of genres, ranging from rap, hip-hop and rock ‘n’ roll, through to some quieter melodies. Musicians across a wide range of genres also worked with him, including will.i.am from the Black Eyed Peas, CL from 2NE1, Kim Junsu from JYJ and vocalist Jeon Inkwon from the band Wild Chrysanthemum. 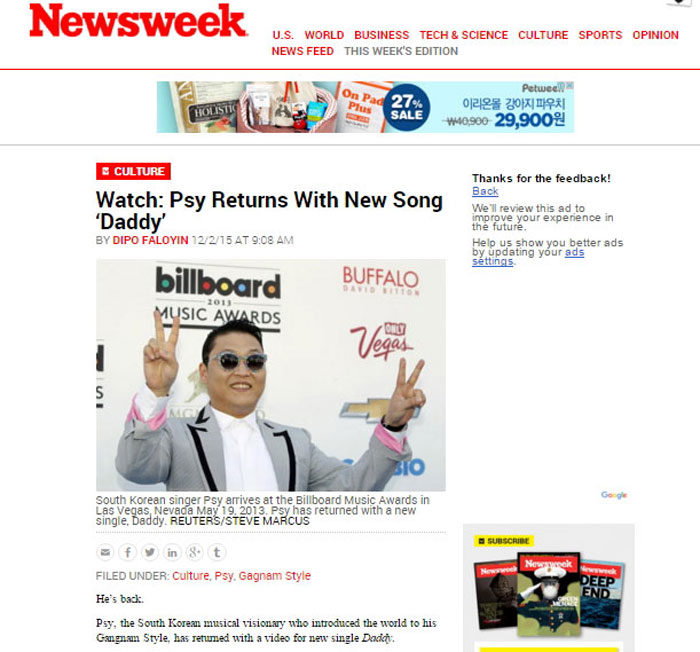 The magazine Newsweek focuses on the rapid increase in YouTube views of Psy’s new song ‘Daddy.’

Regarding the music video for “Daddy,” the magazine Newsweek wrote on Dec. 2 that, “The video has gained nearly 13 million views in two days.” It also said, “To suggest the video has a specific theme would be to limit the unique world in which Psy’s genius exists.” 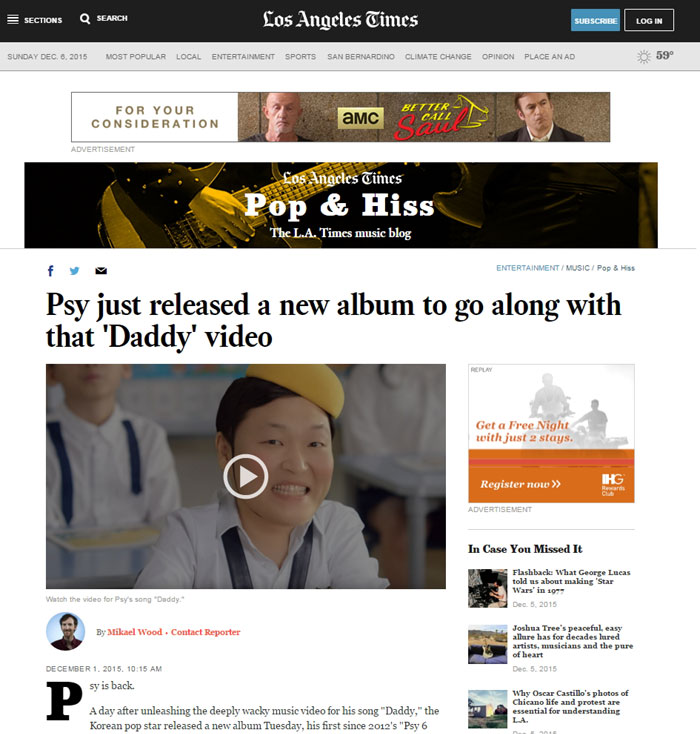 The LA Times writes about Psy’s new album and his song ‘Daddy.’

The LA Times said on Dec. 1, “A day after unleashing the deeply wacky music video for his song ‘Daddy,’ the Korean pop star released a new album.” The paper talked about some of the sillier scenes from the video, which include one where Psy plays the child, father and grandfather all in the same frame. The daily also added that the new album features collaborations with CL from the Korean girl group 2NE1, who also appears on “Daddy,” and other established Korean stars, including Xia from the boy band JYJ.

In its article “The Science of Psy,” CNN focused on his “flailing dance” and the scenes where Psy plays as grandfather, father and son. CNN also talked about the possibility whether or not the new album could repeat the success of “Gangnam Style.”

The U.K.’s Daily Mail said on Dec. 1 that, “Psy is hoping to recreate that magic with his next music venture. The 37-year-old pop singer released an odd but hilarious music video for his latest single, ‘Daddy,’ on Monday.”