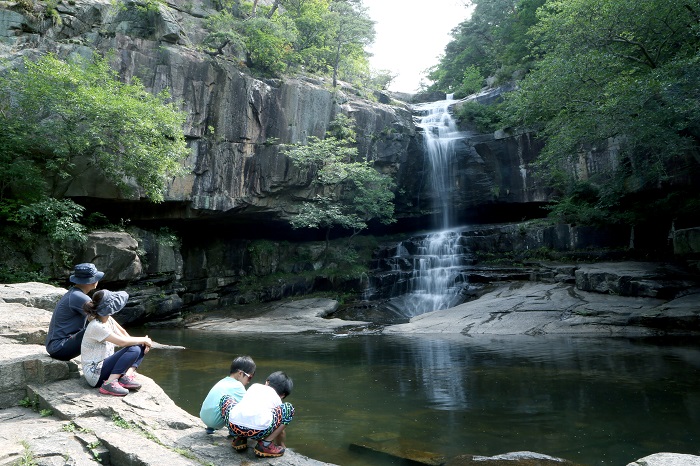 A family on vacation avoids the heat at the Suok Falls in Goesan, Chungcheongbuk-do (North Chungcheong Province).

The sweltering summer heat continues to bother people, both day and night. Beaches and water parks are overcrowded nationwide with a continuing flow of people. If you don’t enjoy crowds, it’s recommended you visit a waterfall where you can enjoy cool water in a calm and peaceful atmosphere, along with the fresh aroma of the forest. The Korea Tourism Organization recently recommended a number of falls for this summer. 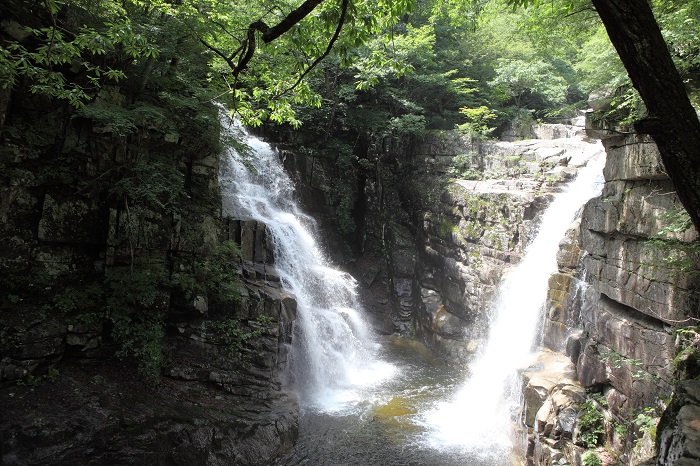 A pair of double waterfalls is found near the Mureung Valley in Donghae, Gangwon-do (Gangwon Province).

Hiking some 3 kilometers up the Mureung Valley, spanning Dutasan Mountain and Cheongoksan Mountain in Donghae, Gangwon Province, will lead visitors to two big jets of water.

The waterfall to the left flows through stair-like rocks while the one on the right falls straight down into the stream. You can cool off by just watching the pair of falls. Further along, the trail offers a series of breathtaking views, including oddly-shaped rocks and stones, Samhwasa Temple surrounded by its twisted valley, the Haksodae Falls and the Seonnyeotang Ravine. 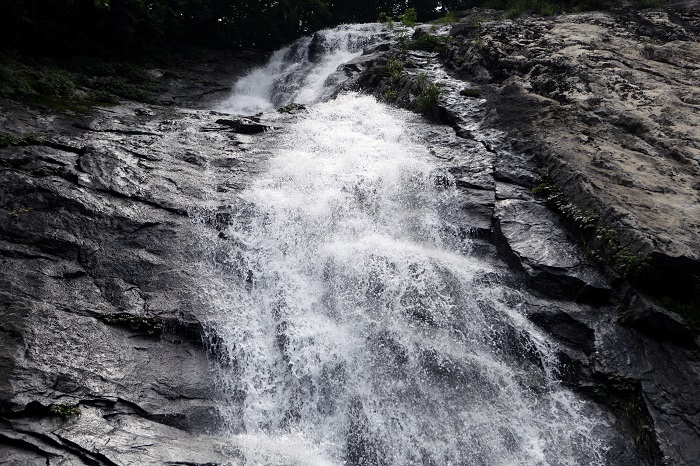 The Mujuchae Falls in Gapyeong, Gyeonggi Province, are ideal for cooling off in the summer.

For those looking for a serene place in Seoul and the capital region, the Yongso Pond and Mujuchae Falls would be a great fit. The pond is located in the upper reaches of the Domachi Valley in Buk-myeon, Gapyeong. The site is peaceful, surrounded by thick trees and gigantic rocks. Only 1 kilometer from the pond are the Mujuchae Falls. The water jet comes from a crack along the large, steep cliff face.

*Trains can take you to Gapyeong Station. Take a bus to the entrance to Seongryongsan Mountain. Some 40 minutes of hiking will take you to the waterfall. 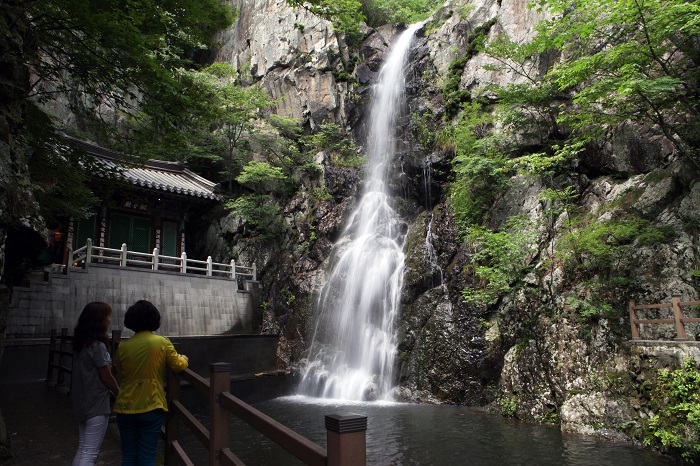 The Hongryong Falls are nestled along Cheonseongsan Mountain in Yangsan, South Gyeongsang Province. Visitors are likely to be overwhelmed by the gigantic jet of water along the rocks and the temple located below the cliff. The site is especially worth visiting on sunny days. When the sun shines, you can see a rainbow reflected in the water that runs through a rock before falling into the pond. It’s one of the must-see waterscapes in the region.

*To reach the town of Daeseok, take the Gyeongbu Expressway and then national route no. 35 toward Tongdosa Temple. Turn right at the gas station in Dongyang and enter town of Daeseong. 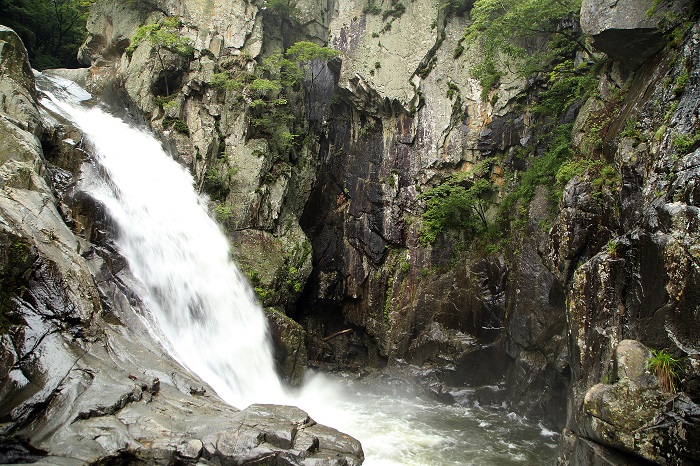 The Yeonsan Falls are one of the tallest waterfalls among the 12 falls in the Naeyeonsan Mountain park near Pohang, Gyeongsangbuk-do (North Gyeongsang Province).

Naeyeonsan Mountain in Pohang, North Gyeongsang Province, is one of the most popular travel destinations in the summer. A fresh and cool breeze is blown from the trees and mountains covered with broadleaf trees. Along the trail are 12 large and small sets of waterfalls. All of them are great and have their own distinctiveness, but two of the highlights are the Gwaneum and Yeonsan Falls. The large water jets and thunder-like sounds are must-have experiences.

*Take national route no. 7 from Pohang toward Bogyeongsa Temple. You can park in the Naeyeonsan Mountain parking lot. 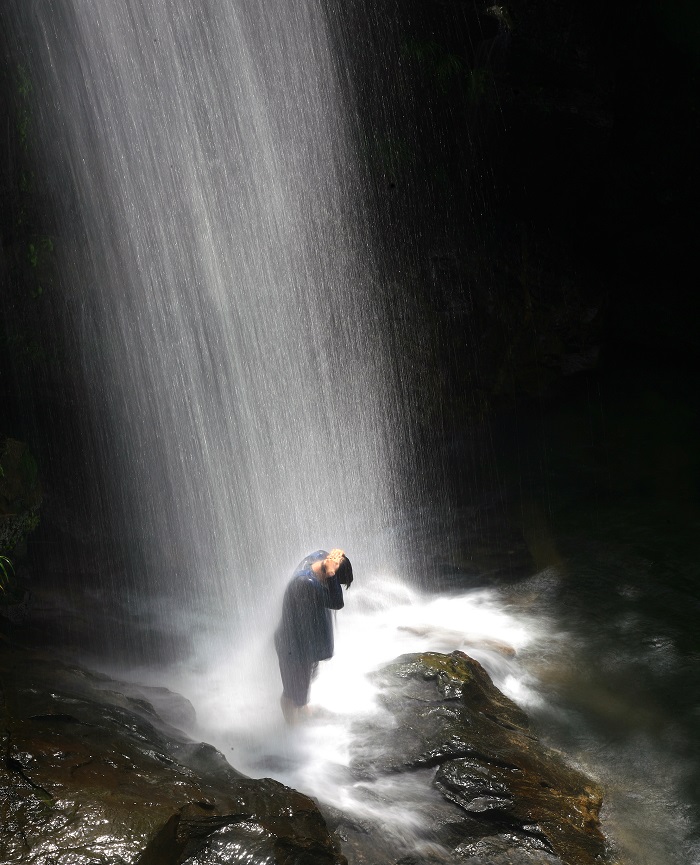 A hiker cools off in the Surak Falls in Gurye, Jeollanam-do (South Jeolla Province).

The Surak Falls in Gurye, South Jeolla Province, are crowded with people who come to hit the water. As many as ten people can stand at the spot where the waterfall hits the stream. The surrounding stream is also wide enough to accommodate several groups of swimmers.

Besides the Surak Falls, there are plenty of things to see in the surrounding area. There is the Hwaeomsa Valley, the Munsugol Valley and the Piagol Valley, as well as Jirisan Spa Land, about 20 minutes away by car. When you walk underneath the waterfall, it’s recommended you wear a hat or wrap a towel around your head.