The new Xinger guide books for Chinese tourists, which cover Seoul, Incheon, Busan, Gyeonggi-do Province, Gangwon-do Province and Jeju Island, were released on April 13. Most of these are revised editions of guide books published in 2011, though the guide book for Jeju Island has been included for the first time. 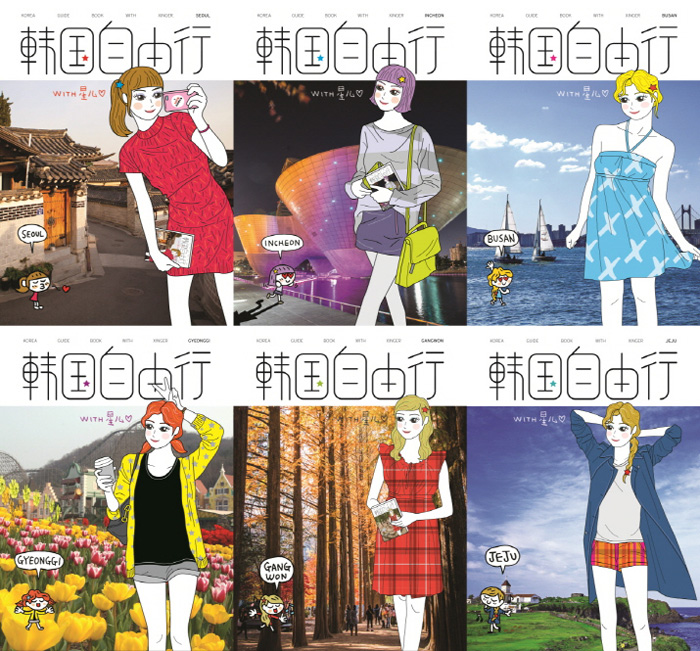 The publications reflect a growing trend among mainland Chinese tourists, where the portion of solo travelers now exceeds that of group tourists. Also, solo travelers tend to visit sets for films and TV soap operas, famous restaurants and shop on their own, rather than simply go to destinations traditionally visited by the tourist buses.

The guide books not only feature existing tourist attractions preferred by Chinese tourists, but also shopping spots, restaurants and attractions related to the popularity in China of Korean pop culture and mass media. They also provide walking maps for certain neighborhoods, recommend optimal itineraries for beginner travelers, and feature travel columns and discount coupons to make it convenient for the solo adventurists. The cover of each edition features the image of Xinger, a cartoon character symbolizing the modern Chinese woman in her 20s, making the guide books friendly and easy to use.

The travel guides will be distributed at Korea Tourism Organization (KTO) branches in Beijing, Shanghai and Guangzhou, among other cities, and will also be available in the simplified Chinese books section at the KTO website (https://chinese.visitkorea.or.kr/chs/xinger/index.html).