In July 1990, the first tomb excavations took place in Daeseong-dong, in Gimhae, Gyeongsangnam-do (South Gyeongsang Province). The artifacts from the ancient Gaya Confederacy (42-562) from some 1,600 years ago finally came to light. The excavations led to the discovery that that location was the center of the early Gaya Confederacy.

Iron smelting technology was the critical factor that lead to Gaya’s establishment and helped the confederacy to command nearby sea routes through trade. Gaya was located on the delta of the Nakdonggang River and it had a well-developed agricultural industry. Gaya was bordered by the sea to the south and actively engaged in trade, which was an advantage in its rise to power.

The city of Gimhae was the capital of Geumgwangaya, the leading power in the early Gaya Confederacy, and there are still many Gaya relics and artifacts found across Gimhae.

A large number of steel artifacts, including iron armor, iron horse helmets, and smaller iron pieces, often used as money, have been found in the Daeseong-dong tombs in Gimhae. Gimhae (김해, 金海) literally means, “Sea of Iron,” as if the city’s name symbolizes the abundance of iron in the area. 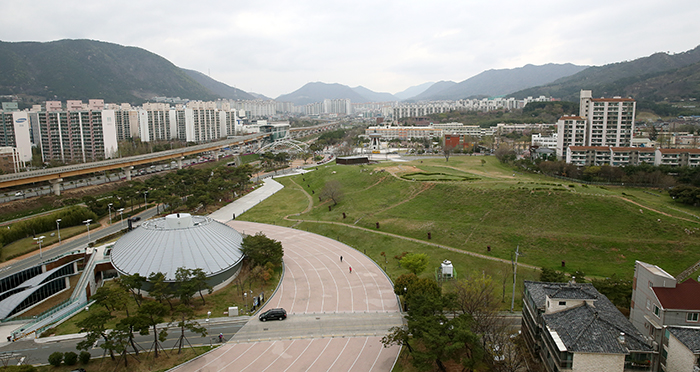 The Daeseong-dong Tombs Museum (left) and a collection of Gaya tombs (right) can be seen in the photograph. 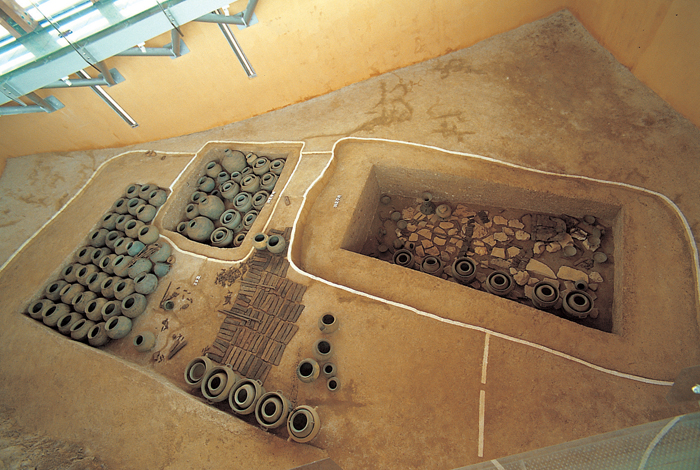 Two wooden coffins have been reproduced on a hill near the Daeseong-dong Tombs Museum. 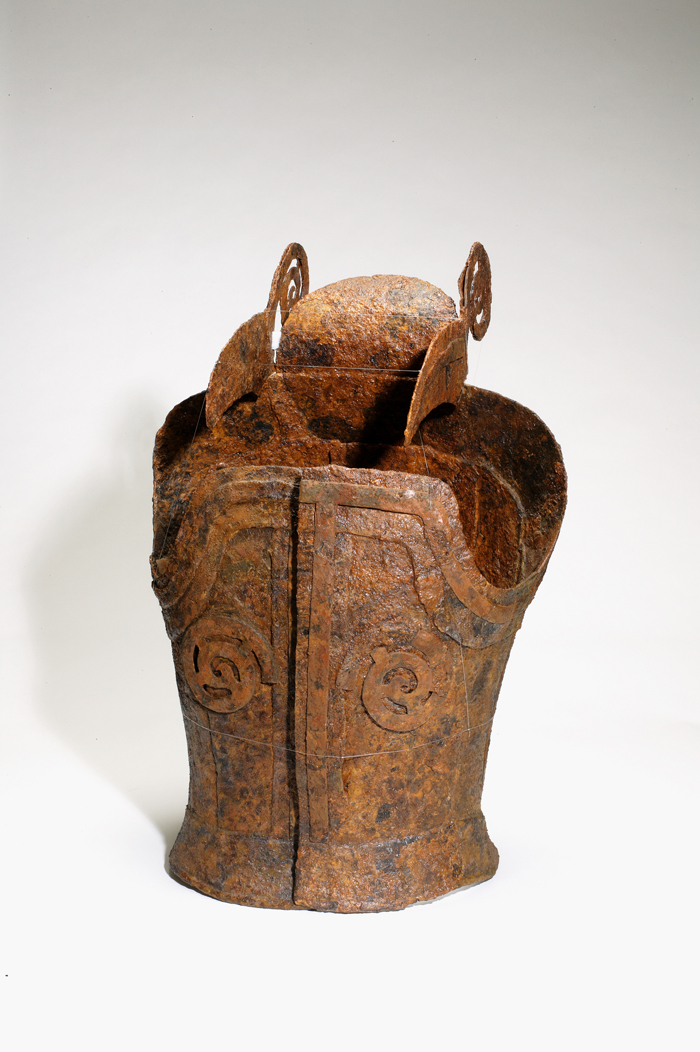 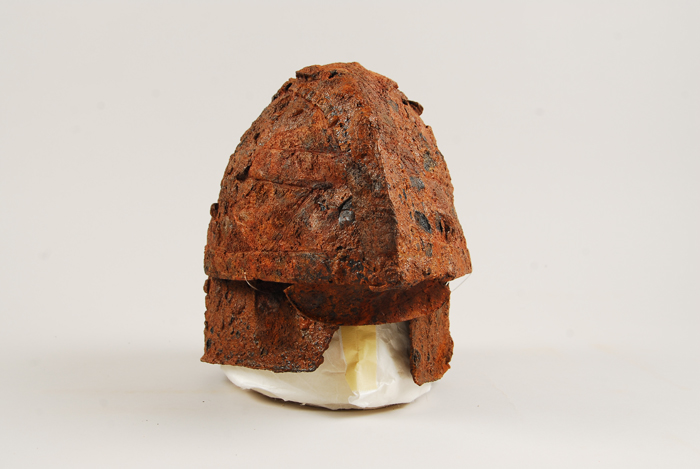 Iron armor (top) and an iron helmet (bottom) found in Gimhae are on display at the Gimhae National Museum.

Gaya artifacts are on display at the Gimhae National Museum.

According to the “Memorabilia of the Three Kingdoms,” or “Samgukyusa” (삼국유사, 三國遺事), a collection of legends and folktales compiled in the 1280s that relates to the Three Kingdoms Period of Korean history (57 B.C.-A.D. 668), King Kim Suro (김수로왕, 金首露王) founded the Geumgwangaya State in 42 and married Heo Wang-ok from Ayuta State (아유타국, 阿踰陁國), which many historians identify with the city of Ayodhya in India.

Between 313 and 314, Goguryeo (37 B.C.-A.D. 668) destroyed Nangnang (Nakrang) and Daebanggun, two of Gaya’s major trading partners, and made inroads toward the south.

Geumgwangaya was hit hard by these attacks, which led to its decline. According to the “Samguk Sagi” (삼국사기, 三國史記), a history book published in 1145 during the Goryeo period (918-1392), Geumgwangaya collapsed in 532 and was afterward annexed by the rising Silla Kingdom (57 B.C.-A.D. 935).

Although Gaya is gone, many relics and artifacts found in Gimhae show its past glory. The tombs of King Suro and his wife are some of the major Gaya monuments.

The tomb is dedicated to King Suro, the founder of Geumgwangaya.

Fish can be seen in a wooden building at King Suro’s tomb.

The tomb of King Suro’s wife, Queen Heo, is smaller than the king’s tomb. The Pasa stone pagoda (파사석탑, 婆娑石塔) located near the tomb, is made of stones brought by the queen when she rode on a ship from the Ayuta State, believed to be in India. The stones were loaded onto the ship to calm the sea, according to the “Memorabilia of the Three Kingdoms.”

Large wooden coffins have been found in the Daeseongdong tombs, and some of the tombs are replicated in actual size in the Daeseong-dong Tombs Museum and in its outdoor exhibitions. The tombs belonged to kings, queens and members of the royal families. Researchers have found bones of people who were buried alive with the dead, earthenware, a gilt-bronze belt and pinwheel-shaped bronze shield ornaments which were produced, it is presumed, in Japan. On the Korean Peninsula, bronze shield ornaments have only been discovered in Gaya territory, attesting to the ancient kingdom’s active trade activities. The tombs were included on UNESCO’s Tentative List of world heritage items in December 2013. 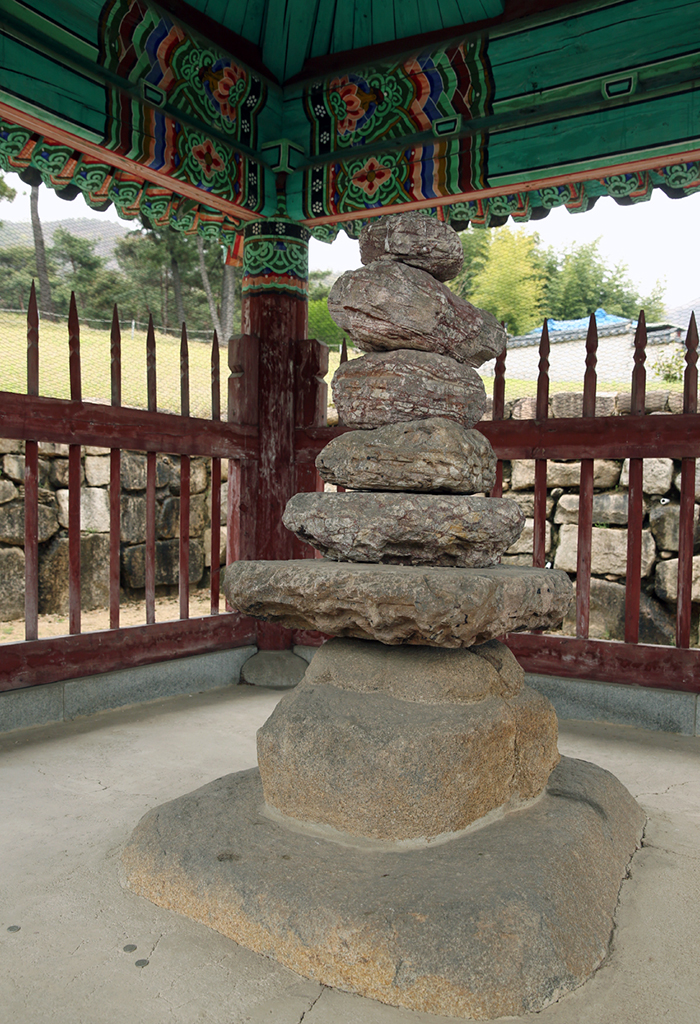 The Pasa stone pagoda is located at the tomb dedicated to King Suro’s wife. 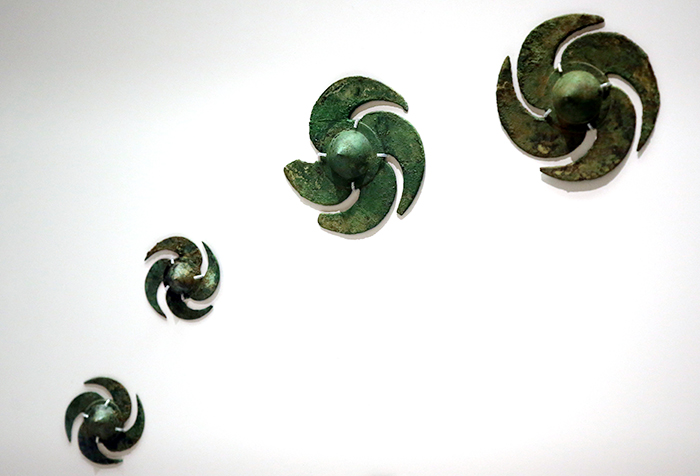 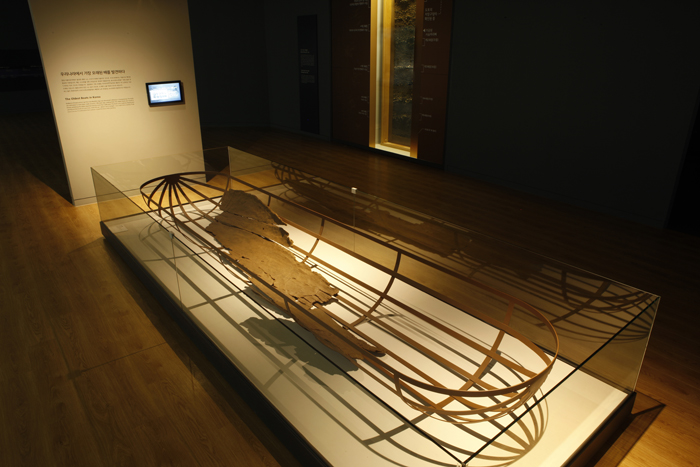 Part of a ship made during the Gaya period can be seen at the Gimhae National Museum.

At the Gimhae National Museum, there are artifacts on display from the late Paleolithic Era, the Neolithic Era and from the Gaya Confederacy. The museum, opened in 1998, also has on exhibit pieces of iron armor, iron helmets, bronze mirrors used for ancestral rites, gilt-bronze crowns, which show the height of Gaya culture, and bird-shaped pottery, which also speaks to the high-life enjoyed by Gaya royalty and upper classes.

“Many items of Gaya iron armor made in the 4th century have been discovered, but iron armor is rarely found among artifacts of Baekje or Goguryeo,” said Yi Yang-su, chief curator at the Gimhae National Museum. “Geumgwangaya was the leading power during the early days of the Gaya Confederacy and as it collapsed, Gaya was reorganized, with the state of Daegaya in Goryeong becoming its center.” 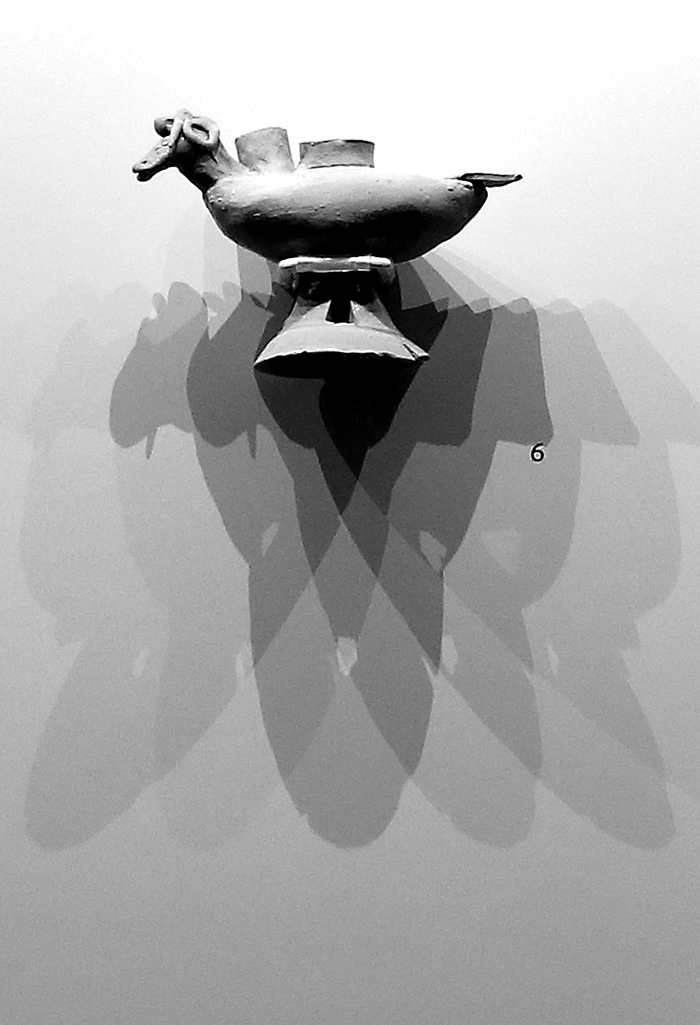 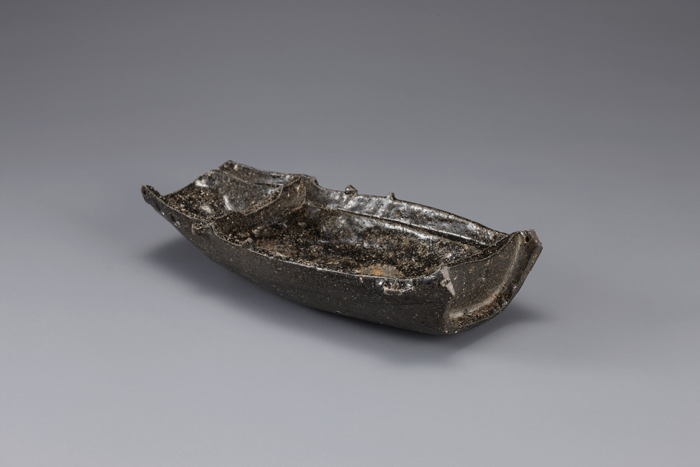 A bronze dagger can be seen at the Gimhae National Museum.