There is a provincial city in southern Korea whose population grows by 10,000 people every year, a very high rate of growth for the country. This is Gimhae, in Gyeongsangnam-do (South Gyeongsang Province), and it continues to absorb people from surrounding cities, including Changwon and even Busan. There is ongoing development across the city, as new towns are springing up one after the other.

Gimhae is located in the southeast of Gyeongsangnam-do, and it is bordered by the Nakdonggang River to the north, by Busan to the east and by Changwon to the south. It has a total of 527,098 citizens as of March this year, and it is the second largest city in South Gyeongsang Province, occupying 463.36 square kilometers. 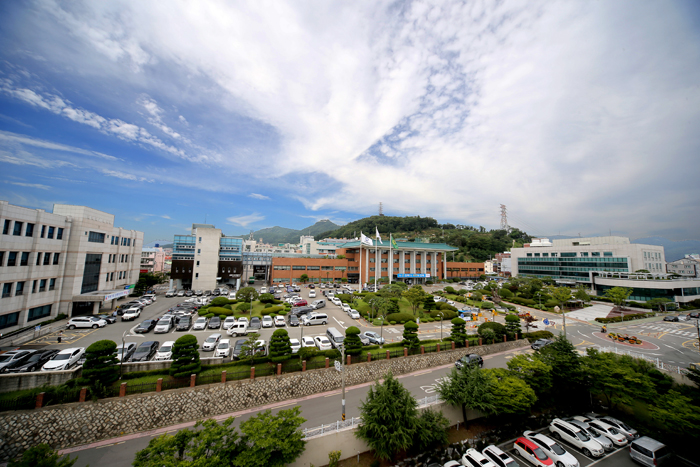 A view of Gimhae City Hall. 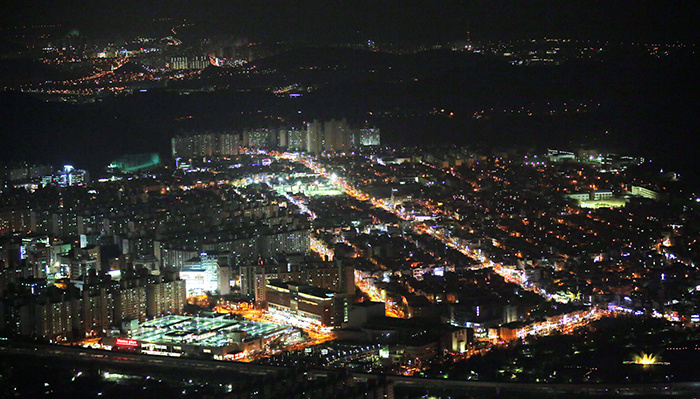 A night view of Gimhae as seen from the Astronomical Observatory atop Bunseongsan Mountain.

The Taebaek Mountains stretch down to Gimhae’s northern parts and the altitude starts to lower in the city’s southern parts. The city’s Mucheoksan Mountain is 700 meters above sea level, and Sineosan Mountain is 630 meters high. Mucheoksan Mountain has rather gentle slopes but its northwestern side has rocky peaks, popular with hikers. There is a pond close to the top of the peak. According to legend, the pond was dug to control the flow of water to the royal tomb of King Suro (d. 199), the founder of the Garakguk State (43-532), a lead state in the Gaya Confederacy. Sineosan Mountain stretches from east to west and the Nakdonggang River flows along the northeastern side of the mountain. Royal azaleas in the spring and silver grass in the autumn attract many hikers to the parks nearby. 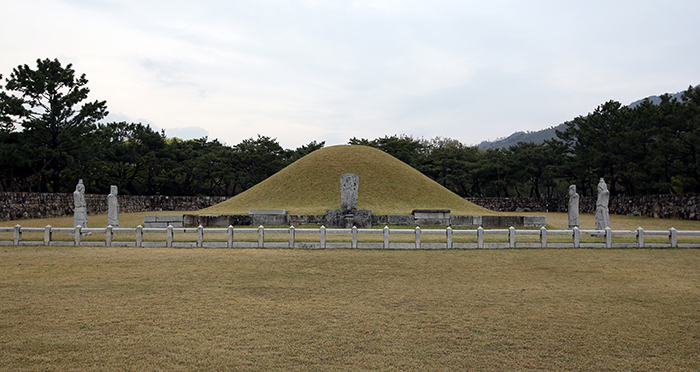 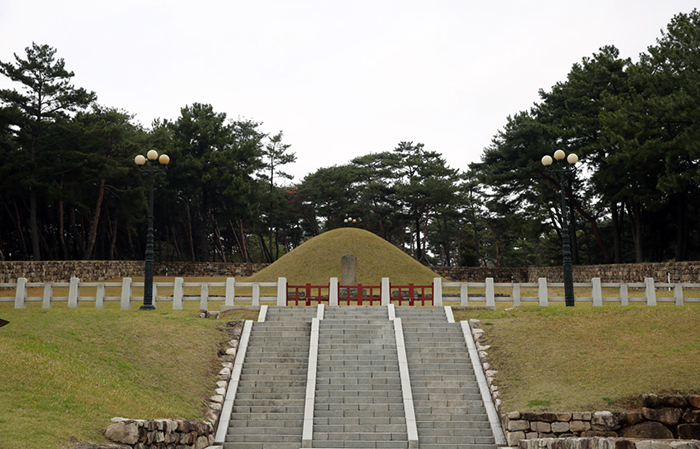 The tomb of King Suro (top), the founder of the Garakguk State (43-532), and the tomb of his wife (bottom) are embraced by pine trees.

Gimhae sits partly astride Korea’s largest delta made of earth and sands transferred from the upper and middle reaches of the Nakdonggang River. For centuries, the place was a major granary and rice farming was quite well developed. With warm weather and large cities nearby, the city’s agricultural industry provides agricultural goods to the surrounding areas. Gimhae is one of the first regions in the country to raise vegetables in greenhouses. Its major agricultural item is rice and vegetables, and fruits are also grown here.

Gimhae’s agricultural specialties include Jinyeong Dangam, a type of persimmon, and Chilsanoriental melon. They are known for their sweetness. Gimhae is famous for its raspberries and it makes up to 70 percent of the raspberries grown in the country. In addition, beef, pork and janggun tea, a type of green tea, are also well known.

Gimhae has both a well-developed manufacturing and agricultural industry. Due to its logistical and transport advantages, and the convenience of finding both a workforce and raw materials, there are over 7,000 small- and medium-sized enterprises in the city. Together, they employ some 83,000 people. With 17,900 migrant workers, Gimhae has the second biggest non-Korean population in the country, behind only Seoul.

These companies are engaged in making machinery, auto components and the metal industries, among others. Gimhae has eight agricultural and industrial complexes and four general industrial complexes. There are four additional complexes, including the Gimhae Techno Valley, currently under construction. A number of foreign companies operate in Gimhae, too. Japan-based Softbank has a data center there, while Kuroda Electric, another Japanese company, is now building a factory there covering 330,000 square meters.

Many industrial parks are located in Gimhae because the city is a major transportation point in the Gyeongsangnam-do region. The Gimhae International Airport is responsible for air transportation to and from both Busan and the province. It is also close to Busan Port, the country’s biggest container terminal. The city is also well connected with the rest of the country through the Namhae, Gimhae-Yangsan and Buma expressways.

The Gimhae Arts and Sports Center has performance halls, exhibition space and sports facilities all at one large complex.

Gimhae is often called the, “ancient city of Gaya, with 500 years of history,” as well as a, “historical city of 2,000 years.” It is home to the ancient Garakguk State (43-532), one of the leading forces in the Gaya Confederacy, powered by its well-developed iron industry. Also located in Gimhae are the royal tombs of King Suro (d. 199) and his wife, Gujibong Peak, the Bonghwangdong Historic Site and the Daeseong-dong Tombs Museum, all major tourist attractions.

In fact, over 7.6 million tourists visited the city last year. The Gimhae Arts and Sports Center and the Gimhae National Museum, which have on display many artifacts from the Gaya Confederacy, and the Clayarch Gimhae Museum, a center for both ceramics and architecture, attract many visitors every year. The Gimhae Gaya Theme Park, which will open in late May, will provide visitors with an opportunity to have a hands-on experience of the ancient kingdom. Gaya-themed musical performances and parades will be held throughout the year. 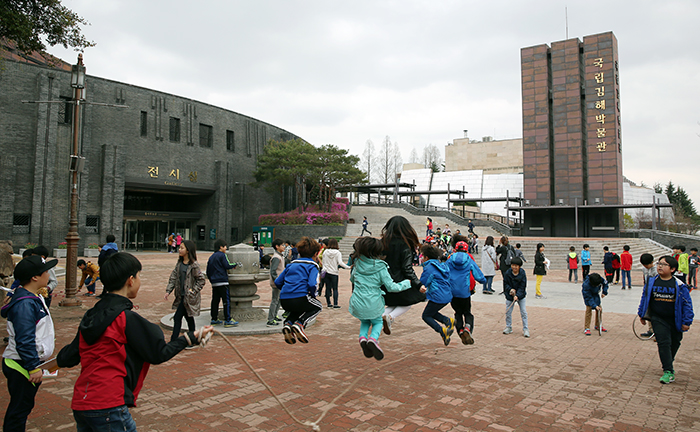 The Clayarch Gimhae Museum, a center for both ceramics and architecture, is covered with 5,000 painted ceramic tiles.

Seoul-Gimhae: Gimhae is 386 kilometers from Seoul and it takes four hours to reach the city by car. By airplane, visitors can fly to Gimhae International Airport and take a train to the city.

By the KTX high-speed train, visitors can get off at Gupo Station in Busan or at Jinyeong Station in Gimhae. It takes 2 hours and 50 minutes from Seoul Station to Gupo Station.