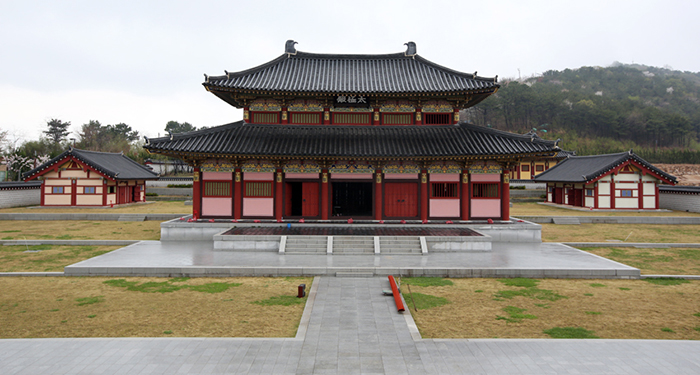 The Taegeukjeon, the main building at the Gimhae Gaya Theme Park, is used as a theme-based exhibition venue.

The Gaya Confederacy (42-532) has been brought back to life with a reconstruction of its largest constituent kingdom, the Garakguk Kingdom (43-532), or Geumgwan Gaya.

In the “Memorabilia of the Three Kingdoms” (Samguk Yusa, 삼국유사, 三國遺事), a text complied in the 1280s, there is only one short record of ancient Gaya: “In the second year of the reign of King Kim Su-ro (d. 199), a 1,500-step-wide external castle was built. People set up the grounds for the royal palace buildings, armory, warehouse and then came back. Strong young men, workers and master artisans were drafted into the construction of the castle, which began on the 20th of the month and finished on February 10. They waited for the agricultural off-season in order to build the palaces and many houses. Construction began in October of that year and ended in February of the following year, the year of Gapjin (甲辰年, A.D. 44).” Based on this short historical record, the Garakguk Kingdom has now been reborn at the Gimhae Gaya Theme Park. 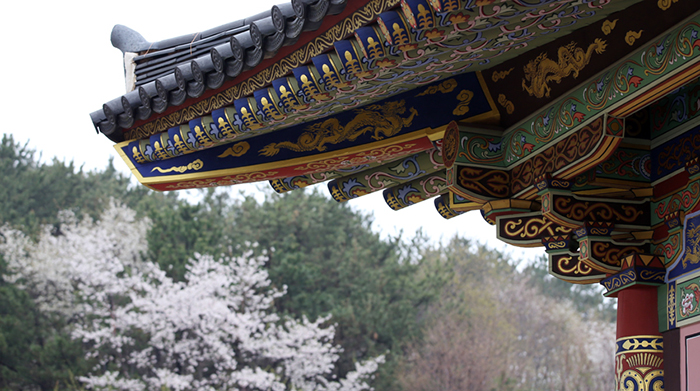 The Gaya-style buildings found at the Gimhae Gaya Theme Park show more colorful decorations, or dancheong, the traditional art of decorating wooden buildings and eaves, than found on the Joseon royal palaces of some 1,500 years afterward.

Though no accurate written records remain about the size or shape of Gaya royal palaces, the reconstructions at the Gimhae Gaya Theme Park have been built to a width of 80 meters and a depth of 120 meters. These buildings are decorated using dancheong, the traditional multicolored paintwork found on palaces’ wooden buildings. The Gaya palaces are more glamorous than those of the Joseon Dynasty (1392-1910). The theme park is composed of the Taegeukjeon, the main venue for protocol ceremonies such as coronations, the Wanghujeon and then the Garakjeongjeon, where the king dealt with other state affairs. The Taegeukjeon and the Wanghujeon will be used as exhibition venues at the theme park.

The historical amusement park is scheduled to open on April 22. It is composed of about 70 buildings and facilities, including the Gaya royal palaces, a performance venue for musicals, an experience village where visitors can dress up as ancient warriors, a campground, and it covers 179,000 square meters in total. 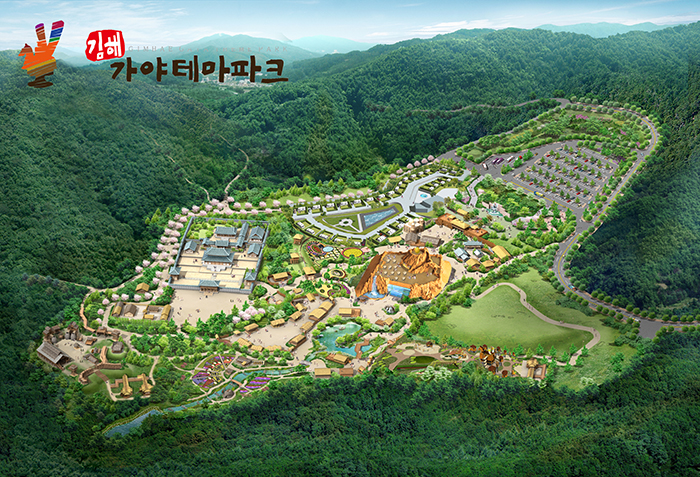 An artist’s impression of the Gimhae Gaya Theme Park located in Bunsan, Gimhae City. The park has six themes.

Created under the slogan of, “Restoring the Kingdom of Gaya in 2015,” the Gimhae Gaya Theme Park is, itself, composed of six themes. There will be a musical staged at least twice every day. “Miracle Love” tells the love story of King Kim Su-ro and Queen Heo. On weekends, it’s staged three times per day. Park visitors can also see a parade lead by King Kim Su-ro and the queen. 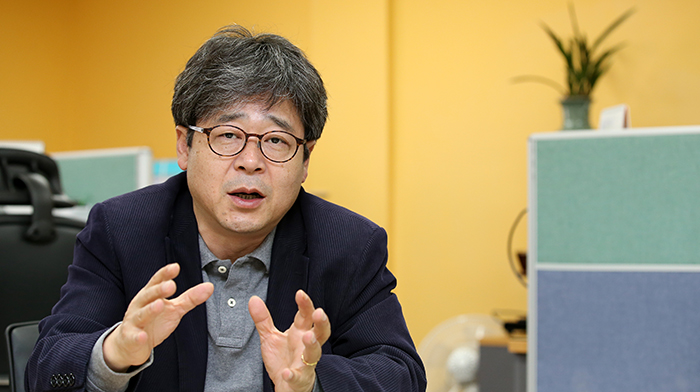 Executive director Lim Kyung-ick of the Gimhae Gaya Theme Park outlines all the features of the park on April 6.

The park’s executive director, Lim Kyung-ick, said, “The musical tells the miraculous love story of King Kim Su-ro and Queen Heo that took place some 2,000 years ago. The two overcame the long physical distance and culture gap that existed between ancient Korea and ancient India. The audience will be touched by the musical, ‘Miracle Love,’ even if they do not understand the Korean.”

The park also has an Indian Hall, a special venue to introduce the many cultures of India, the queen’s home country. Buildings based on ancient Chinese and Japanese kingdoms can also be found at the park, as those many ancient kingdoms were Gaya’s main trading partners.

In the ancient villages, people can learn more about and experience the clothes worn by Gaya people, try first-hand some buncheong pottery, a type of grayish blue powdered celadon, and learn how to forge iron at the blacksmith’s.

At the park, visitors can enjoy the “9 items and 9 tastes,” which refers to nine local specialties from the Gimhae region. The campground can accommodate up to 400 people. It is equipped with 30 caravans and tenting sites. The caravans are luxurious, yet also environment-friendly. Inside, users can enjoy a foot bath, thanks to special equipment made from retinispora and tourmaline.

The ancient Gaya Kingdom will return to life at the Gimhae Gaya Theme Park this spring in Gyeongsangnam-do. 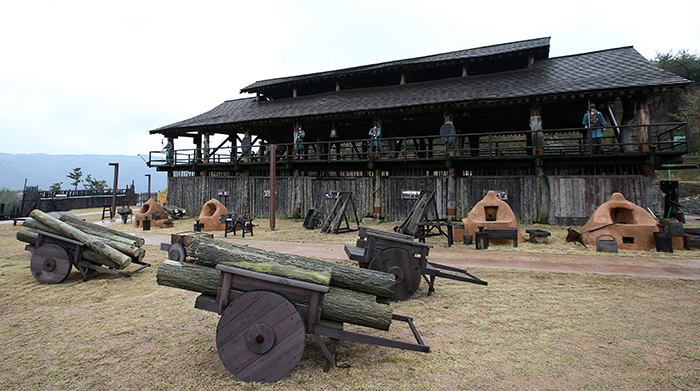 The smithy is used as a filming location for the TV soap opera “King Kim Su-ro.” Visitors can learn more about ancient Gaya smelting and iron crafts. 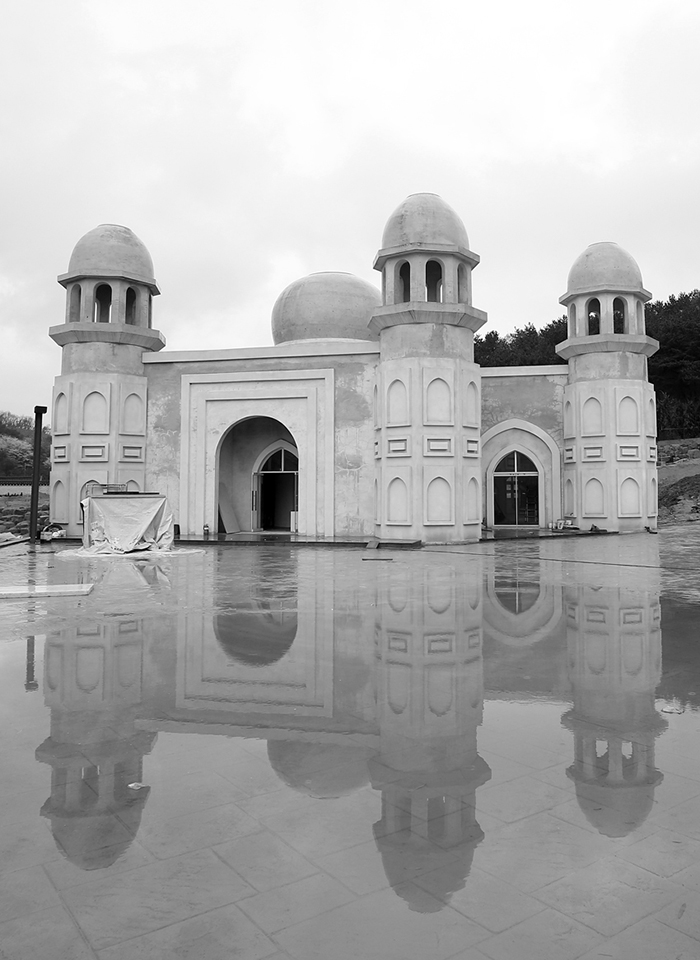 The Indian Hall at the theme park is based on the Taj Mahal. 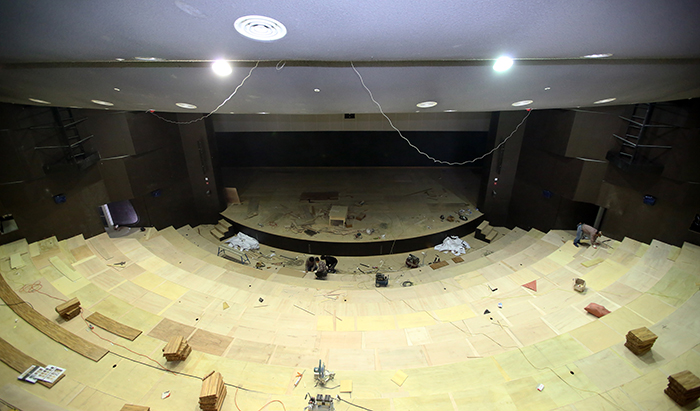 The performance venue for musicals is still under construction on April 6. ‘Miracle Love’ tells the love story of King Kim Su-ro and Queen Heo.