The term “slow city” originates from the Italian word cittaslow, which means a city where life is slow and easy. Cittaslow also refers to an international movement founded by Mayor Palolo Saturnini of Greve in Chianti, Italy, in 1999. It promotes a slow city life, where nature and tradition come together.Cheongsando Island is the first Asian island designated as a slow city, or a chittaslow town. Numerous films and TV soaps are shot on the island because it is so beautiful. The island rests calmly on the picturesque sea and has countless charms, such as stone walls and terraced rice paddies.

A walk on Cheongsando Island is refreshing for both the mind and the body. The so-called Slow Paths attract tourists from far and wide, and the islanders tread the paths every day. The 11 Slow Paths have a combined length of 42.2 kilometers. The scenery takes your breath away with every step. Walking along a Slow Path intoxicates you with the scenery, and your steps naturally become slower, hence their name. You will encounter nearly everything on the island—an observatory that affords a sweeping view of Cheongsando and nearby islands, the steep cliffs along the shoreline, the terraced rice paddies (gudeuljang), beaches with unforgettable sunsets and sunrises, villages where the simple life endures, the unique straw- or grass-covered graves (chobun) and even Bronze Age dolmens (goindol).

Cheongsando in Film and Drama

“Seopyeonje” (1993), a famous movie by director Im Kwon-taek, was filmed on Cheongsando Island. Today, there is a path named the Seopyeonje Path, after the film. Lined by low, crude stonewalls on both sides, the Seopyeonje Path stretches through fields of gently rolling canola and barley, especially gorgeous in the spring when they burst forth with yellow canola flowers and green barley sprouts. Of course, the path offers alluring beauty throughout the year, too. Popular TV soap operas such as “Spring Waltz” (2006), “Scent of a Woman” (2011) and “Pinocchio” (2014) were also filmed here, and the filming locations are open to tourists. 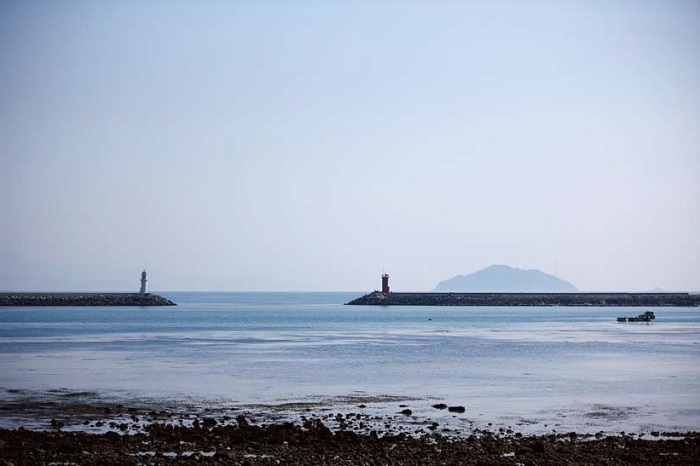 Cheongsando Island has a long tradition of using stones for many purposes, including stone walls and terraced rice paddies, the gudeuljangnon. Sangseo Village retains those traditions almost intact. Constructed solely with naturally formed stones, without a trace of soil, the village’s stone walls remain the same, creating a peaceful ambience. Long ago, the rocky soil and slopes made farming challenging, but the villagers terraced the slopes with wide-flat stones to make way for rice paddies. These terraced rice paddies are called gudeuljang non in Korean, and the U.N. Food and Agricultural Organization (FAO) has put them on its list of Globally Important Agricultural Heritage Systems (GIAHS).

There are picturesque beaches on the island, too. The soft sand of Puldeung Beach in Sinheung-ri Village on the east side of the island runs for two kilometers at low tide. The sound of pebbles rubbing together in the surf can be heard at Gaetdol Beach in Jinsan-ri Village. If you want to relish a stunning sunset, go to Cheongsong Beach. People flock there to see the sun paint in reddish tones the vast sandy beach and the sea speckled with islands and islets.

(Left) A road sign tells you that you are on a Slow Path. (Right) From Cheonghaejin, you can see the outer castle gate below.

Cheonghaejin and King of the Sea

Nearby Wando Island has many tourist attractions. There are historical sites and beautiful scenery, including the evergreen Wando Arboretum, the historic castle founded by General Jang Bogo and Wando Tower, from which you can see far into the distance, even to Jeju Island. If you are interested in the history of Wando Island, you must go to Cheonghaejin, the historic castle and market place built by General Jang Bogo, who was dubbed the King of the Sea. Born in 787, he established Cheonghaejin on the small island of Jangdo in the sea off Wando Island in 828. Cheonghaejin functioned not only as a garrison but also as a center of trade. With the building of Cheonghaejin, Jang emerged as a central trade figure among late Unified Silla (668-935), Tang China (618-907), and Heian Japan (794-1185), helping Silla take the initiative in seaborne trade across the region. Cheonghaejin remains nearly intact today, telling us what the glory days of General Jang were like. Nearby is a memorial hall which commemorates the feats of General Jang Bogo.

calmislandkorearestslow city
About the author