Enjoy a bit of island life in Namhae

Namhae-gun County, comprised of the two islands of Namhaedo and Changseondo and located along the southern edge of Gyeongsangnam-do (South Gyeongsang Province), is barely connected to land by two bridges. The Namhae Bridge links the region with Hadong-gun County and the Changseon-Samcheonpo Bridge connects to Samcheonpo in Sacheon City. If it had not been for the two bridges, the county would be floating alone in the southern sea.

The first impression of Namhae, as seen from one of the bridges, is peaceful. The ocean looks calm and smooth. Crossing over the bridge, tourists coo over the picturesque beauty of the shimmering blue ocean where a group of yachts and ferries bob in the tide. At this point, drivers, too, start to slow down. 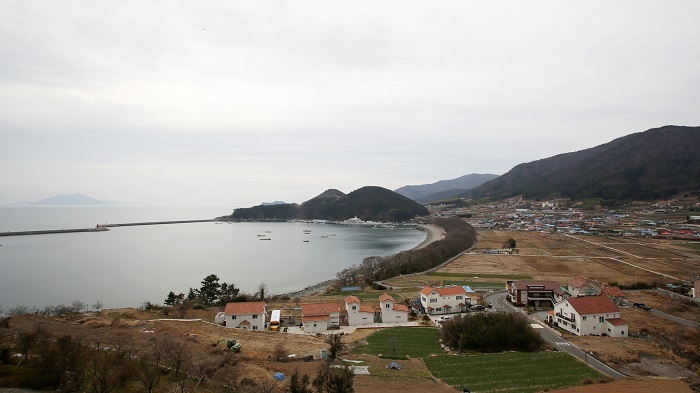 The peaceful and serene seascape of Namhae creates a picture-perfect scene.

Over the past few years, Namhae has been getting more and more recognized among tourists as a travel destination equipped with abundant things to see and do. It has been particularly beloved by those looking to enjoy water sports, such as kayaking and yachting. In fact, every summer the ocean hosts a wide variety of marine sports and sailing races.

Influenced by its nationwide recognition as a center of water sports, the Namhae Sailing School was established in 2009 in Samdong-myeon. It offers programs for both professionals and one-time tourists. One might associate sailing with royal pastimes, but the costs are surprisingly affordable. Getting a sailing lesson in a dinghy costs KRW 30,000 per day, and renting a 10-person cruising yacht costs only KRW 20,000 per person. In the summer, tourists flock to the ocean to enjoy fishing and a party by the water. Some of them sail toward uninhabited rocks and islets to enjoy swimming in the quiet and transparent ocean all day long.

*For more information about the sailing school, please visit its homepage: https://yacht.namhae.go.kr A sailor adjusts the sail to harvest the power of the wind. Renting a sailboat is relatively cheap, enticing more and more tourists to spend their summer holiday here.

The eastern part of Samdong-myeon, where the sailing school is, is a really popular spot with tourists. In addition to the Namhae Cypress Recreational Park and the Butterfly Ecological Park, along with some museums and galleries, there is the so-called “German Village” and the House & Garden, both clusters of singular and colorful architecture. The German Village, a cluster of about 30 homes built in a commonplace ‘German’ style, is one of the most popular tourist destinations in Namhae. The House of Cheol-su is also popular, as the MBC soap opera ‘Couple of Fantasy’ was filmed there in 2006.

The German Village and the House & Garden are located about five minutes from each other by foot. With their singular orange roofs, the houses in the German Village are lived in by former miners and nurses from Korea who worked in Germany in the 1960s and 1970s. You are only eligible to buy one of the houses if you were part of the Korean government’s plans to dispatch workers to Germany in those years. The residents are mostly miner & nurse couples, as well as some German men married to Korean nurses.

The houses were mostly constructed with material imported directly from Germany. Looking at the houses’ architectural styles itself is quite fun. There are a total of 33 houses in the village, all with German names, such as the Goethe House, Heidelberg or Morgenstern.

In the center of the village there is an exhibition built in honor of the village’s residents and others who worked in Germany, noting their contributions to the nation’s economic growth. The exhibition is mostly in black and white, symbolizing the miners and the nurses. Every corner of the space exudes the loneliness and yearning for their homeland that they felt while overseas. Occasionally, local residents show up at the exhibition to provide an explanation about their vivid memories. Tourists inspect a pond in front of one of the houses at the House & Garden.

About five minutes toward the north is the House & Garden, a cluster of houses with beautiful gardens. There are 23 houses there, with gardens from 18 countries around the world. All the houses are privately owned, but they willingly open their gardens for tourists. The Hwajeong, roughly the “Flower House,” is decked out with a Japanese garden, while the Finlandia home is built with timbers imported from Finland. The Mediterranean Lin’s Palace home, the residence of actress Park Won-suk, is decorated with red roof tiles and palm trees. In the spring, the neighborhood is overrun by more than 8,000 holidaymakers per day. It’s quite beautiful when the flowers bloom. 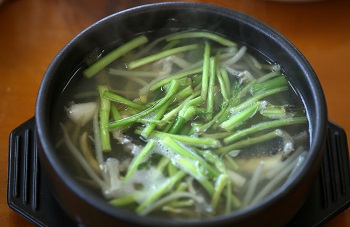 Finally, you are strongly recommended to try the seafood when you visit Namhae. Pictured is a soup of panther puffer, a type of swellfish that’s about the size of an index finger. Dip the fish in soy sauce and then mix it in the soup with a bowl of rice, chili paste, bean sprouts and vegetables. This plain yet savory broth is good for hangovers, too.