This is the fifth part in our series, “Masks & the Mask Dance” published in partnership with the National Research Institute of Cultural Heritage

The Haeseo Mask Dance: the mask dances from Hwanghae Province

The Haeseo Mask Dances have been transmitted around Hwanghae Province, currently governed by North Korea. They thrived in the Bongsan, Gangnyeong and Eunyul regions. Among the three Haeseo-style variants, the Bongsan mask dance enjoyed the widest popularity for its well-structured plot and elevated dialog.

The mask dance from Bongsan was performed at nearly every five-day market held across the region, and was annually staged on a grand scale to celebrate Dano, one of the major traditional holidays falling on the fifth day of the fifth lunar month. According to historical records, this mask dance could draw up to 20,000 people in its heyday. Most mask dance performers were low-ranking local government employees. The costumes were more colorful compared with those in other mask dances, and verses from Chinese poetry were frequently quoted in the dialog. In addition, musicians belonging to the government office provided well-organized background music. 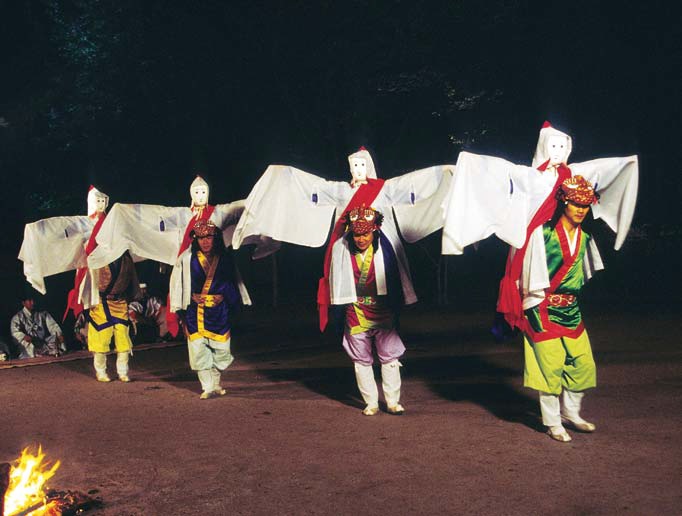 One interesting traditional story about the Bongsan mask dance goes as follows:

At the end of Goryeo times, there lived an old Buddhist monk named Manseok. He was widely respected for his deep devotion to Buddhism.

Among his acquaintances was a mean and ill-behaved man named Chwibari. He was always thinking about how to make a fool of Manseok in front of the local people.

One day, Chwibari came up with the idea of causing the monk trouble and asked a charming young woman to seduce him. Manseok devoted most of his time to studying Buddhist scripture, but ten year’s study went up in smoke when the flirtatious young woman approached him. In the end, Manseok became the laughing stock of the village.

Afterward, a man heard the tale of Manseok and created the Bongsan mask dance based on this story. It is said that the man created the mask dance because he could no longer stand the degraded state of Buddhism and the lack of public morals.

At first, the Bongsan mask dance was performed as part of the rituals held on Buddha’s birthday, the eighth day of the forth lunar month. However, as it slowly began to lose its religious qualities and increasingly served as a form of popular entertainment, it became one of the main folk performances in celebration of Dano.

The Bongsan mask dance consists of seven scenes and most of them, including the first episode where four young monks perform a ritual dance, are closely related to Buddhism.

Meanwhile, the Eunyul mask dance consists of six scenes; the first begins with a dance by a white lion. Unlike the Bongsan dance, it was performed mainly by farmers and other members of less-educated classes and its lines are based on everyday language rather than verses from Chinese poetry. 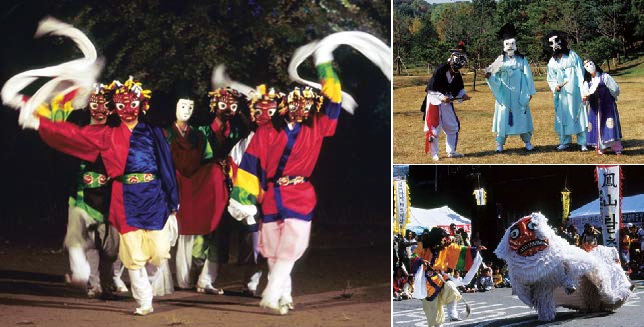 Although the Eunyul and Bongsan mask dances were all created in Hwanghae Provice, their contents, structure of chapters and characters vary. 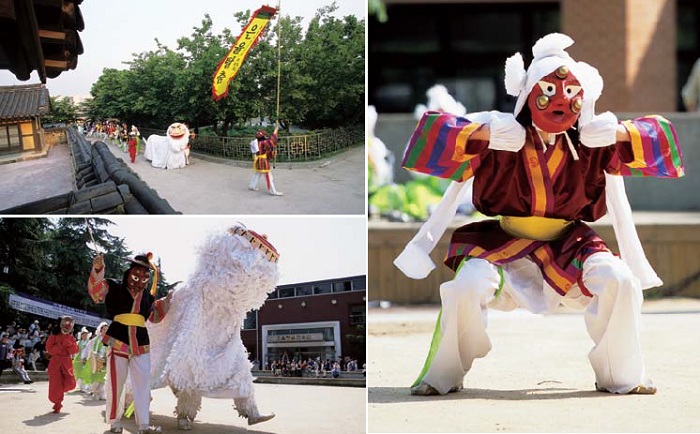 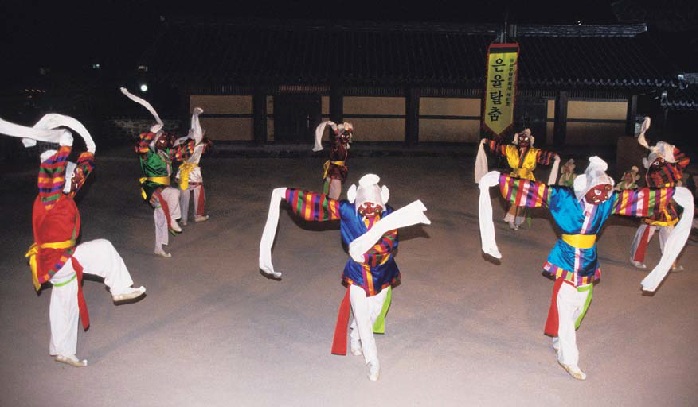 The eight monks dance together to the taryeong rhythm as part of the Eunyul mask dance.

The Gangnyeong mask dance is quite different from the Bongsan variant in several ways. First, it consists of eight scenes. Second, the motions of its dances are elegant and smooth. Third, the costumes are simple. Lastly, it is a folk performance focusing on religious values while the Bongsan dance is mainly for amusement. 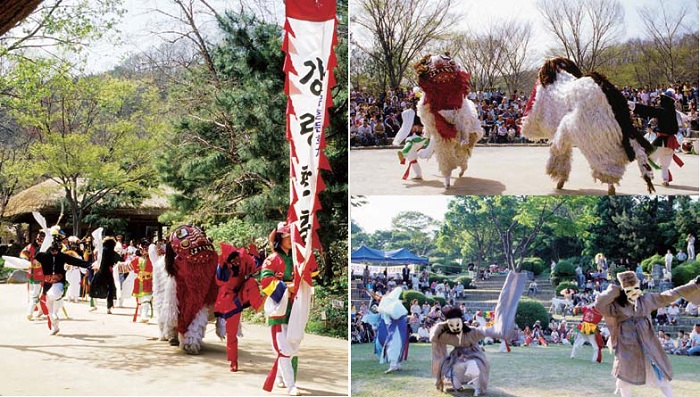 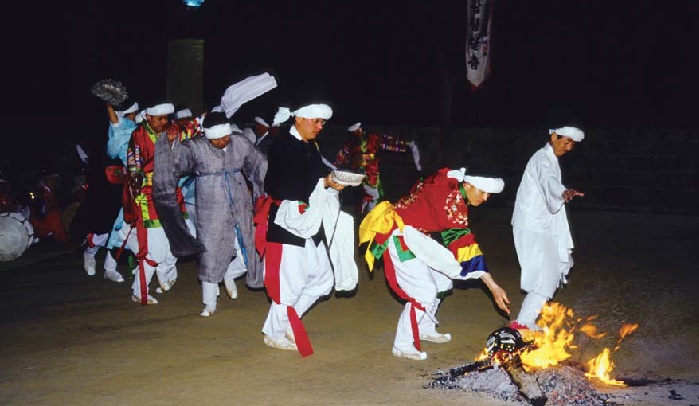 Dancers burn their masks after a performance.

A total of 26 masks are used in the Bongsan mask dance. The Gangnyeong mask dance presents 19 masks, including two horsemen, two servants, two monks, an old man and a drunkard.

The monkey serves as the shoe seller’s errand boy in the Bongsan mask dance, while in the Gangnyeong mask dance he amuses the audience with his tricks.

Sinjangsu is an itinerant shoe peddler. The old monk, seduced by the little shaman, buys a pair of shoes on credit, and the shoe seller sends the monkey to the monk in order to collect the money owed for the shoes. 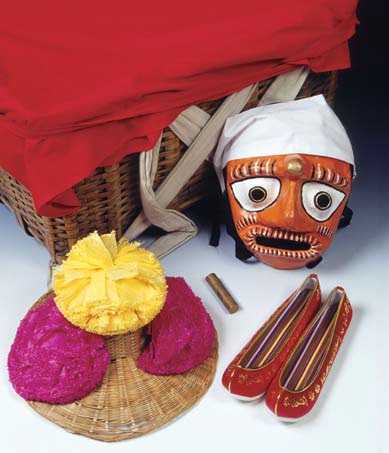 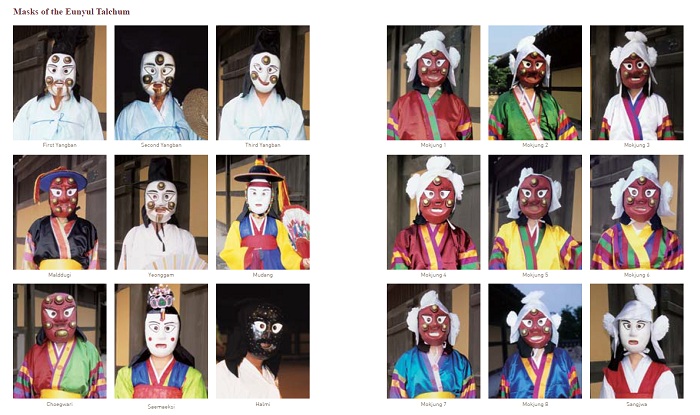 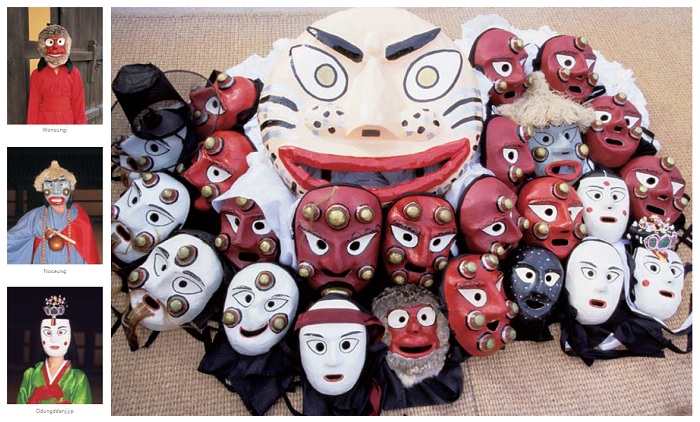 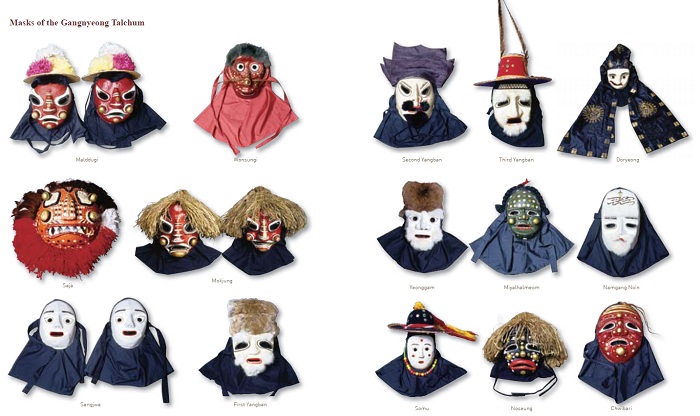 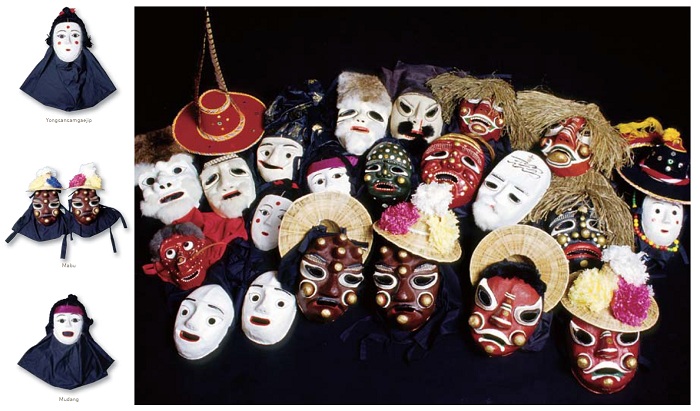