With a single card, people will now be able to borrow books from 295 public libraries across the nation.

As announced by the Ministry of Culture, Sports and Tourism on December 22, the Library One Card, orChaekieum, will be used nationwide starting in January next year. 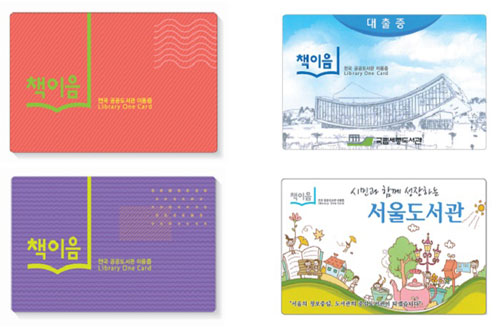 With the Library One Card, or Chaekieum, a card available in January, people will be able to use 295 public libraries nationwide.

The Culture Ministry selected the name Chaekieum among the many entries submitted during a brand name contest. It also produced manuals about how to create designs for the Chaekieum membership card, all using the same logo. The guidebooks were distributed to public libraries on December 2.

The name Chaekieum was formed from the words chaek, which means “book,” and ieum, which means “connection.” The compound word means, “Communicate and connect with each other through books.”

The Chaekieum pass allows people to freely take advantage of a designated set of public libraries, by connecting library to library.

A total of 295 public libraries, run by eight local governments, have taken part in the integrated book service. Previously, library-goers used a similar membership card, with a different name, though, at each center. Now, the cards issued beginning early next year will all have the same name, “Chaekieum.” The number of service users has so far come to as many as 1.3 million.

Readers can continue to use their old library cards and are not required to get a new Chaekieum card if they do not wish to do so.

“We plan to increase the number of public libraries in the capital area, including Seoul, next year, as part of our efforts to offer more conveniences and more services for book lovers,” said an official from the Culture Ministry.

“We are going to develop a Chaekieum smartphone application, too. It will allow you to download your Chaekieumcard information onto your mobile phone and will also be able to recommend popular books.