In November 1500, the ancient kingdom of Yuguguk (유구국, 琉球國), a chain of islands located far to the south and east of the Korean Peninsula, dispatched an envoy to the Joseon court. The envoy delivered a message to the Korean monarch.

It reads: “King Sangjin of the Jungsanwang Dynasty (中山王) in Yuguguk is writing this letter to the king of Joseon… We haven’t reached you for a while. It is desirable to send an envoy to cross the steep mountains and wide seas to pay tribute to Joseon. However, we didn’t know how to get there. We hope that you, a wise king, will show us generosity and accept these little gifts we send. We also hope you bring the book “Daejangjongyeong” (대장존경, 大藏尊經) to give our nation enlightenment and stability. We can’t have more respect for you.”

The ancient kingdom of Yuguguk refers to the Ryukyu Kingdom that existed on and around the island of Okinawa, now at the southern tip of modern-day Japan. A special exhibition showcasing the history and culture of the independent kingdom will be held at the National Palace Museum of Korea starting on December 9.

The independent kingdom that appeared in the 15th century is known to have had vibrant and artistic exchanges with neighboring Joseon, medieval Japan and Ming China, developing its own government and trade network. The kingdom was invaded by the Satsuma Domain (薩摩藩), one of the largest feudal domains in Japan in the early 17th century, and was later politically interfered with by the Tokugawa shogunate (徳川幕府), the feudal military government that ruled over Japan for more than two centuries. Ryukyu had to render tributes to both Japan and China. Eventually, in 1879, the kingdom was forced to integrate with the new Meiji government, becoming Okinawa, as it is now.

The crown of the Ryukyu King, from the Naha City Museum of History. The crown has an ornamental hairpin in the center.

The exhibition will showcase around 200 relics that help visitors better understand the history and culture of the Ryukyu Kingdom. On display are 33 national treasures and six important cultural properties. Among them are some relics used by the royal family of the Sho Dynasty (尙), including the crown and official garments of the Ryukyu king, as well as a number of receptacles used during rituals and ceremonies. In addition to the craftworks such as royal lacquer ware and pottery, the exhibition will have on display historical books, paintings and traditional musical instruments.

The royal crown, garments and ceremonial receptacles are expected to draw the most attention. Produced in the 18th century, the crown of the Ryukyu king was known to have been worn during official events such as Lunar New Year and the reception of foreign diplomats. The colorful ornaments are especially eye-catching, along with the hairpin. Also on display are articles made of bingata cloth, an Okinawan traditional dyed cloth with mixed patterns of flowers, phoenixes and flames. It was known to be worn by the royal family as casual ware.

Both of the crown and garments are registered as Japanese national treasures and will be showcased for only the first two weeks of the exhibition.

Royal garments made of bingata fabric were worn by the son of the king, from the Naha City Museum of History. The patterns of a phoenix and hwayeomboju, or flames, are dyed in a traditional Ryukyu style.

Some ancient books and maps will be on display, too, showing that the Ryukyu Kingdom and Joseon had a long-lasting history of cultural exchanges.

Royal ritual ceremonial receptacles, from the Naha City Museum of History. The items were used in the royal family’s private chambers, mostly by females or kings during ritual ceremonies.

During the exhibition, the museum will host special lectures and traditional performances that offer visitors a chance to better understand the history and culture of Ryukyu and the range of cultural exchanges it had with Joseon.

On December 9, the first day of the exhibition, special lectures about the history and culture of the Ryukyu Kingdom will be given by the heads of the Naha City Museum of History and the Urasoe Art Museum. Traditional Okinawan performances will also be showcased during the exhibition.

The exhibition will run until February 8.
For more information, please call the National Palace Museum of Korea at 02)-3701-7633. 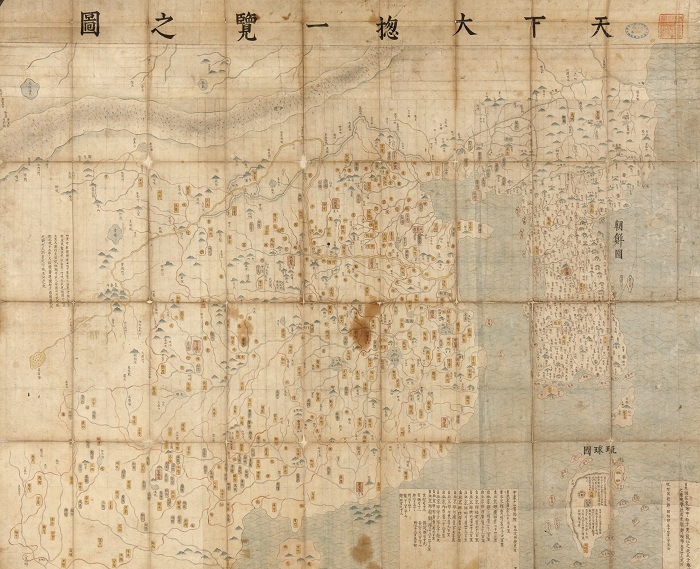 This map, from the National Museum of Japanese History, shows the Ryukyu Kingdom, Joseon and 13 castles in China, with no Japanese islands shown. The map indicates that Joseon is about 5,430 li — equivalent to 2,132 kilometers — from Ryuku. 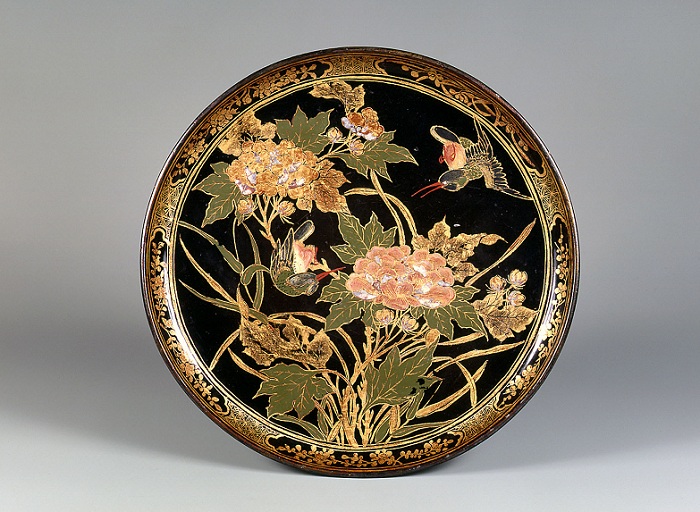 A black lacquerware plate from the Urasoe Art Museum. Visitors can get a peek into the kingdom’s lacquerware production methodology and technique.

“A Moon in Izumizaki,” from the Tokyo National Museum. This woodblock print is one of the eight beautiful landscape paintings by Katsushika Hokusai (1760-1849), the well-known ukiyo-e artist, a genre of print and painting that developed in the Edo period. 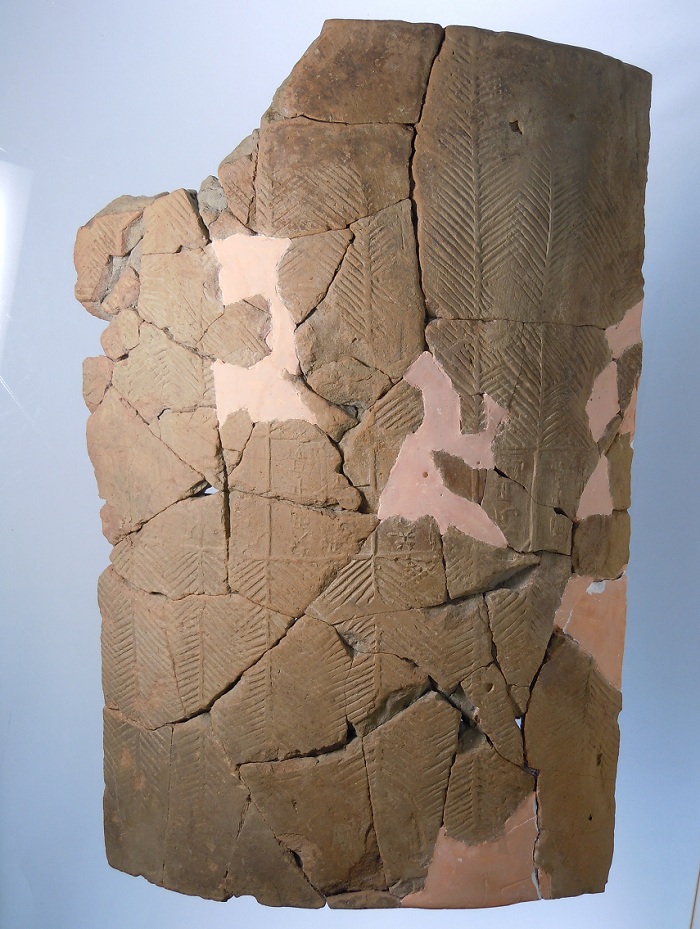 A roof tile from the 13-14th century, from Urasoe City’s Board of Education. This small piece of roof tile, discovered in Okinawa, has an engraving that reads, “This is produced by a master craftsman in the year of Gyeyu, the Black Chicken.” The tile shows influences from Goryeo times, suggesting that there might have been cultural exchanges between the Korean Peninsula and the Ryukyu islands even before a kingdom was established there.