A love set in stone: a tale of a master stone carver and his wife who go to the deepest depths of love.

In Gyeongju, the ancient capital of the Silla Kingdom (57 BC–AD 935), there are many historical relics that give one a glimpse into the ancient world whose remnants now serve as artifacts to modern humanity. Bulguksa Temple is among the most famous of such historical sights, a reminder of the country’s rich Buddhist traditions. On the temple grounds, a majestic stone pagoda known as Seokgatap, designated National Treasure No. 21, stands tall for all visitors to see, shrouded in a mysterious beauty that’s amplified by its nickname, the Shadowless Pagoda. Awe-inspiring as the pagoda may be, its nickname reveals a tragic tale associated with its construction.

Sometime during the mid-eighth century, King Gyeongdeok of Silla had the pagoda constructed under the direction of Kim Daeseong, an expert stone architect and a chief royal official. Determined to construct the best pagoda possible, Kim called upon a master sculptor and stone carver, Asadal, who was originally from the Baekje Kingdom that had been conquered by Silla. Supposedly the best in his craft, Asadal was dragged away from his beloved wife and home and taken to Gyeongju, where he was to stay until his work was finished. The two were known for being an inseparable couple and both were in tears.

Devastated, Asadal’s wife waited in agony for her husband’s return, but no matter how much time passed, she received no news of his homecoming. Desperate and sick with longing, she set out for Gyeongju, taking almost no rest until she arrived in front of Bulguksa Temple. However, women were not allowed on temple grounds back then, and she was told to wait outside until her husband was finished. Days passed, then months, but the pagoda’s construction showed no sign of ending. Asadal’s wife grew more haggard and desperate each day, while Asadal continued to toil ceaselessly in order to finish his work and return home. 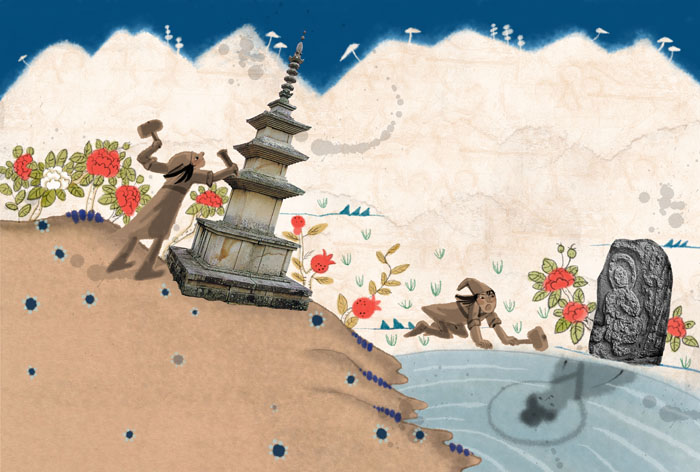 One day, a monk saw Asadal’s wife waiting outside the temple gates. When she told him her reason for waiting so persistently, he sent her to a nearby pond, telling her that the pagoda’s shadow would appear on the pond’s surface once construction was finished. Yet the monk must have just gotten sick of seeing her, for no matter how long Asadal’s wife waited for the pagoda’s shadow to appear, the pond’s surface remained as still and clear as ever. Finally, just as she was reaching her physical and emotional limit, something appeared on the surface of the pond—but it wasn’t the pagoda. It was Asadal. Distraught and love-sick, Asadal’s wife cried out for her husband and leaped into the pond to join him. She ended up drowning, unbeknownst to Asadal, who finished his work a few days later.

When Asadal heard of his wife’s tragic death, he mourned her by carving her image in a rock near the pond. Upon finishing his last project, he saw her image in the pond— just a brief shadow, but it was his beloved wife nonetheless. Crying out to her, Asadal leaped into the pond, where he drowned and joined his wife in the afterlife. Thus we now have our pagoda and pond, which are respectively called the Shadowless Pagoda and Shadow Pond in honor of Asadal and his loving wife.

The story of Asadal and his wife was given new meaning in the 20th century by poet Shin Dong-yeob and novelist Hyeon Jin-keon, who both used the two characters as symbols of Korea’s struggle for independence and national identity. Both writers recognized the metaphorical merit of Asadal and his wife as ideal for representing the passion and spiritual dignity of the Korean people.