People walk fast around central Seoul. They take the subway as they go about the city. They walk peacefully along the paths in the mountains. They enjoy the scenery of the royal palaces.
A French animator captures such daily routines on his canvas, drawing the Korean people and all things Korean. This is Samir Dahmani who recently published his illustrations in “Samir Draws a Strange Seoul.”

Dahmani developed his interest in Korean culture when he studied in a master’s degree animation course at the ÉESI D’Angouleme in Angouleme, France. The aroma of specific Korean foods, in particular, which he first experienced through his Korean friends in Angouleme, caught his attention and lingered in his mind, playing a crucial role in bringing him to Seoul from New York. Illustrator Samir Dahmani poses for a photo at his exhibition in the Seoul Metropolitan Library. 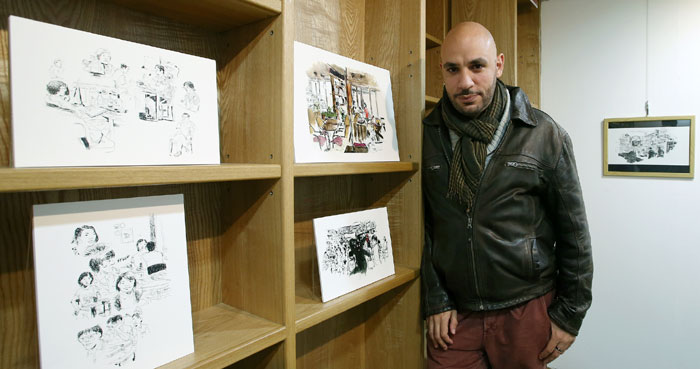 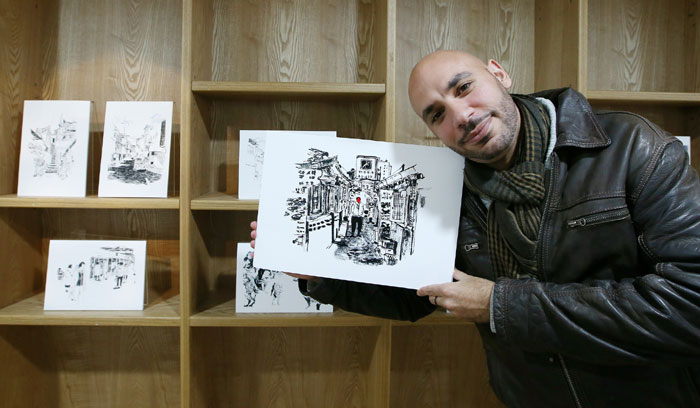 Dahmani poses for a photo while holding one of his works of art. A man wearing a red mask shows up in many of the illustrations.

He wrote in his book, “Different memories, which were buried, became unearthed by some smell.” The source of the aroma was tteokbokki. Dahmani first felt like a stranger when he initially came to Seoul after arriving at Incheon International Airport. However, he now tends to feel a closeness to this strange land.

His past experiences of trying Korean food gradually developed into an interest in all aspects of Korean culture. Dahmani wrote, “Little by little, all things in a country on the opposite side of the earth began to feel closer. It was a rendezvous with Korean culture.”

He said that he was able to find interest and passion in Seoul, “a city that is alive.” The French animator was captivated by today’s Korea, where past traditions and the changes of today co-exist.

In regard to the Korean people, he said, “Koreans seem to have much wariness and can be cold, but once they smile, you get to know them as people full of shyness and compassion.”

An interview with Samir Dahmani 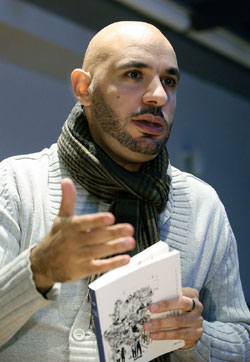 – In your book, you said the smell of a particular food made you come to Korea, and the food in question was tteokbokki. Is there any reason you fell for tteokbokki?
I first tried tteokbokki with Korean students I met when studying in Angoulème. It was very delicious. Korean friends introduced the dish as a food they used to often cook. I really liked it.
I was actually curious about overseas students, so I got close to some Korean students. I liked the smell when they cooked Korean food. I even thought of making the title of the book, “The Smell ofTteokbokki.” I often cook tteokbokki myself. Before I met my Korean friends, I didn’t know much about Korea, except the fact that Korea was a host country of the FIFA 2002 Korea-Japan World Cup.

– What makes you interested in Korean culture? What made you feel a sense of familiarity with Korean culture?
At first, I was interested in big cities, like New York. After meeting my Korean friends, however, I got interested in Korea. When in Angoulème, I chose “city” as the topic of my M.A. thesis because not many artists dealt with Seoul as a subject matter of their works. I liked Seoul’s development, which it achieved through a co-existence of today’s modernity and the traditions of the past.

– Is there any particular place you visited numerous times to draw? Is there any place you prefer visiting in Korea?
I don’t have one particular place I prefer to visit. I do like the dynamism of the subways, however. Inside the subway, I can see people communicate and live with one another. When I go down the stairs to the subway station, however, a totally different world unfolds, where people pass quickly by the shops. The contrast of people between, in and outside the subway intrigued me. In the subway, I can see people’s facial expressions and conveniently draw them, compared to buses where I can see only see the backs of their heads.
I don’t have any particular places to visit for my work. I love to walk and follow where my feet go. I like to get off the subway without a plan and find new places. When I get to somewhere I don’t know at all, all my five senses get stronger, which makes for good conditions under which to draw a picture. When drawing, I find a place this way and I sit for 1 hour to think. When I get an idea to draw, then I start working. I enjoy finding new places without any plan, but with a map and draw pictures.

– In the book, you drew yourself as a man with a red face, a red mask named Malttugi, or a big nose wearing a traditional red Korean garment. Why did you portray yourself like that?
That character is not me. I drew a nose because of my “nose project” which I did earlier. This is based on a story by Russian novelist Nikolai Gogol. It’s about a man who loses his nose and searches everywhere to find it. I got the motivation from the novel and applied it to the Korean background in my work. I colored it red to highlight it, and made him wear a dopo, too, the traditional Korean gown that’s mostly worn by male Confucian scholars. I was also interested in the symbolic meaning of noses in Korean culture. I think the nose symbolizes identity in Korean culture. I also heard about a saying, “Seoul is where you can lose your nose within a split second.” I also know the aspiration of many Asian people for a high-bridged nose like a Westerner, and that “kojaengi” is a term Koreans use to make fun of Western people.
The person with the Malttugi mask is the story teller. This is derived from my study of traditional Korean masks.Malttugi is the one who leads the story in Korean mask dances. In my book, the Malttugi character plays the same role.

– What messages do you wish to deliver through your book?
I want to remind Koreans of the preciousness of small, trivial things which they take for granted and forget about during their daily routines. Of course, this is possible only because I am a foreigner in Korea. Maybe Koreans would tell the same to me if I were in France. I thought many jewels are around Koreans but that they are not aware of it. So in my book, I wanted to remind them of it.

– Do you have any unforgettable memories of Korea? If so, please tell us.
I would say my latest project about a Korean woman named Gyeongsuk, who the hero of my “nose project” meets during his searches for noses in Korea. Gyeongsuk is an interpreter who studied in France and now lives in Korea. My next project will be based on her story. For this project, I have been meeting Korean students, particularly female students who studied overseas. I find it very interesting to have interviews with them because they feel difficulties in their lives adapting to Korea after studying in France. To gather information for this project, I have been interviewing people and will write another book in a hope of learning more about Seoul and Korean culture.

– Where do you get inspirations for your work?
I don’t really have inspirations. I love working on specific topics. However, I have many references I love, like artists, writers, directors or photographers who come from different backgrounds. All those references built my sensitivity.

– What kind of artist do you think you are?
I think I am a researcher, because the most important thing for me is to be very curious about all things. It is the best way to improve my work.

When studying in Angoulème, I studied a lot about the connectivity of animation, video and other media. These studies have proven essential in creating the content in my work.

– Tell us about your future plans or next book.
I have been working with my Korean girlfriend on the Gyeongsuk project. She interviews French people and I interview Korean students, showing both points of view.
Another plan is to participate in a project with Jesus Castro, a French documentary director. Castro will film me as I work and make a documentary.

– Are there any challenges you wish to take on in the future?
I don’t have any particular goal to take on any challenge. I am not sure whether I should continue drawing because I also love teaching others. I like drawing, but I also like talking to other people, so I would like to try teaching others about drawing.

– What do “Korea” and “animation” mean to you?
Drawing is like a voyage for me because when I go on a trip, I forget about the time and concentrate on the moment. So it is questioning myself about a particular word or thoughts, and then expressing myself on paper. I hope people can throw a question mark onto themselves after seeing my pictures of the small stories of each of us. I believe such questions can help society develop. Korean society is facing an important turning point where past traditions and the new changes of today co-exist. I believe that now is the very time to raise questions, when traditions and the new generation collide. 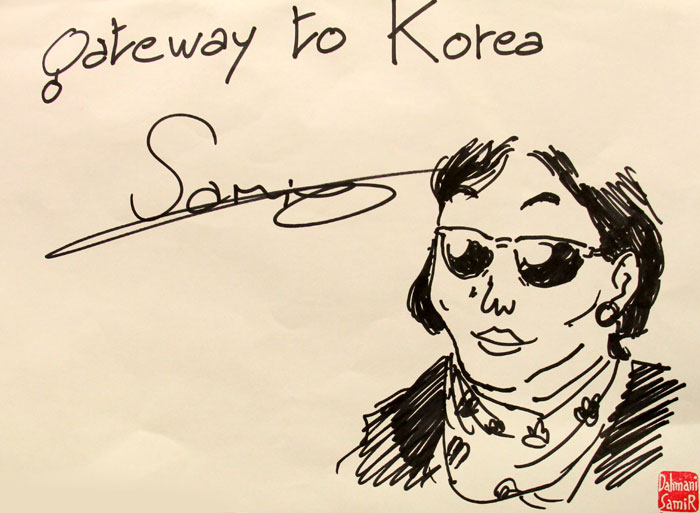 Dahmani signs his autograph with a drawing of a typical Korean woman, or ‘ajumma.’ He says he enjoys drawing the Korean female face. 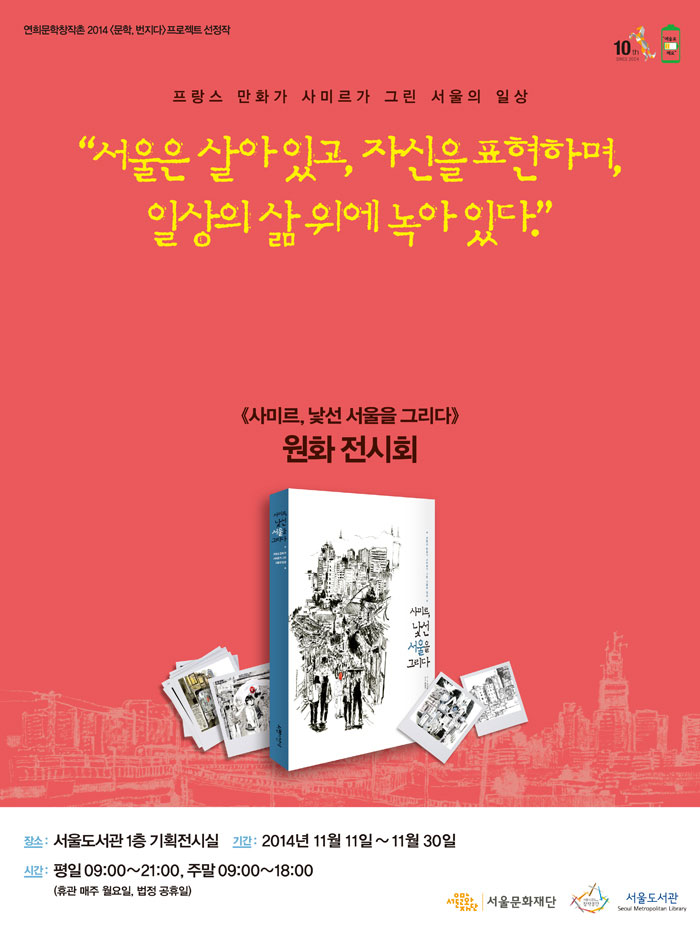