The National Academy of Agricultural Science (NAAS), part of the Rural Development Administration (RDA), and the Thünen Institut (TI), a federal research institute in Germany, have signed an MOU on November 14 to cooperate on organic farming.

Being under the auspices of the German Ministry of Food and Agriculture (BMEL), the TI is dedicated to studying the scientific development of organic farming. It is comprised of 14 departments, including those focused on species diversity, the climatization of crops and other fields. 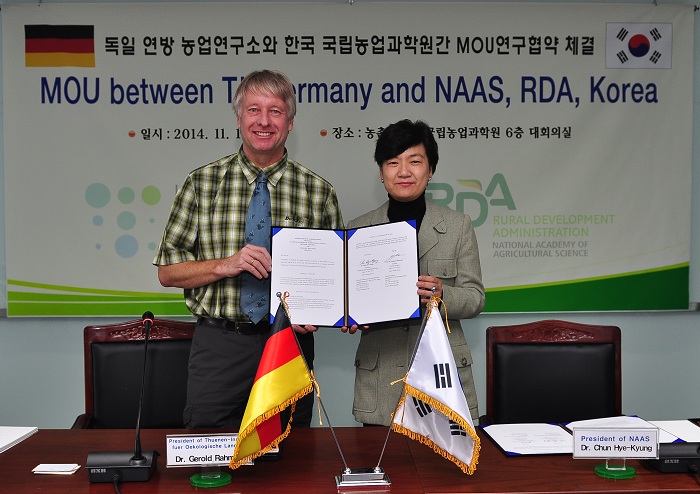 Dr. Chun Hye-Kyung of the NAAS (right) and Dr. Gerold Rahmann of the TI pose for a photograph after signing an MOU to cooperate on organic farming projects between Korea and Germany. (photo courtesy of the NAAS)

With the agreement, the two research bodies pledged to cooperate on the development of organic farming projects in both countries. Specifically, they will cooperate on increasing the importance of the agricultural industry to the local economy, studies on the influence of organic farming on agricultural ecology, exchanges in human resources and possible joint studies for the future.

In addition, the two bodies agreed to enhance connections with German experts in organic farming to increase the quality of studies and strengthen their cooperative system.

By the end of this year, the two organizations plan to hold a training session for the evaluation of environmental effects of organic farms and to share the experiences and know-how of Germany with their Korean counterparts. 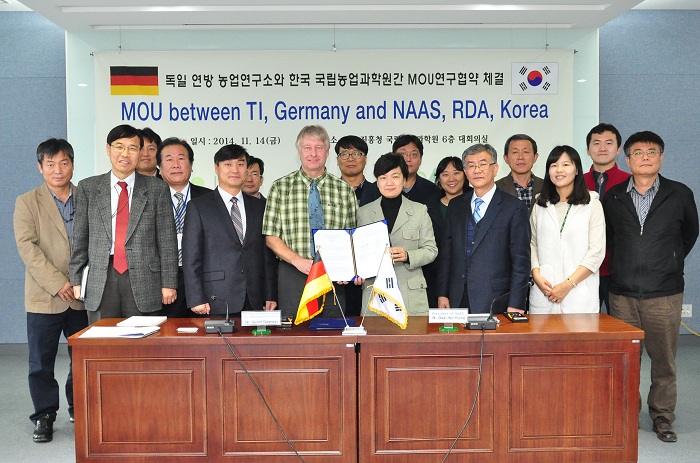 Korea’s NAAS and Germany’s TI sign an MOU on November 14 agreeing to cooperate on organic farming. (photo courtesy of the NAAS)