Which axe is yours?: A tale of three axes teaches that honesty prevails

Once upon a time in a distant land, there lived an honest logger. His axe was not particularly valuable, for it was old, made of impure metal and was partly rusted, but it served its purpose well. On a regular day just like any other, the logger went up to the mountains and, after finding a nice spot next to a lake, began splitting logs.

The work must have been strenuous, for the diligent logger quickly tired. “Just a little while longer and I’ll take a break,” he thought, as his technique began to falter. Fatigue got the better of him, and the logger’s hand slipped, sending his tool spiraling into the nearby pond.

“Oh no!” the logger cried. “That was my only axe.” As the logger deliberated over whether or not to dive in, the pond suddenly grumbled and the water parted violently, revealing a majestic old man with a white beard. The logger stared, dumbfounded.

“What’s the matter, and why are you fretting about my lake?” the majestic old man demanded.

“I … I dropped my axe into the water,” the logger replied, utterly speechless.

The old man disappeared back into the water without a word, only to reappear moments later with an axe in each hand. One was made of gold, the other of silver.

“Is this your axe?” the old man asked, holding out the gold axe.

“Then is this your axe?” the old man asked again, this time holding out the silver axe.

“No, sir, that’s not mine either,” the logger responded. “My axe is old and made of rusted iron.”

The old man was moved by the logger’s honesty. He decided to reward the logger by giving him all three axes. The unexpected present made the logger rich, and he lived comfortably for the rest of his days. In a nearby village, another logger, one who was not so honest, heard what had happened. The greedy logger hurried over to the honest logger and asked him for details. 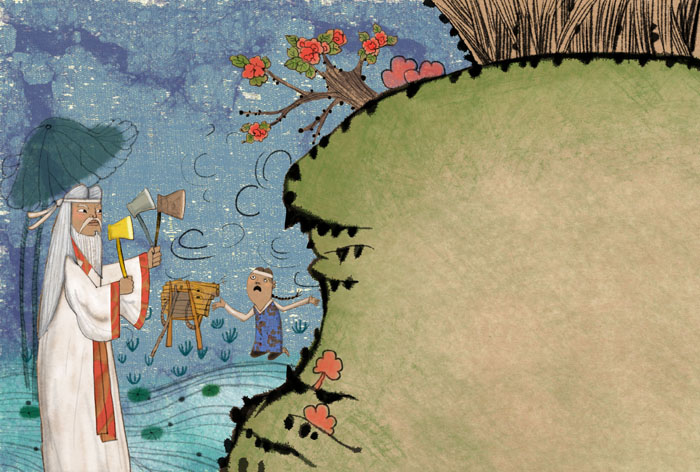 The greedy logger then decided that he would do the same: go to the mountain, find the same pond, pretend to lose his axe and ask the bearded old man for the gold and silver axes. He did just that. When he dropped his axe into the lake, the water grumbled and parted violently, revealing the old man with a white beard.

“Who are you and why are you fretting about my lake?”the old man demanded, his voice booming as majestically as ever.

“I lost my axe in the water,” the greedy logger replied.

The old man disappeared into the water and resurfaced with the gold and silver axes.

“Is this your axe?” the old man asked, holding out the gold axe.

“Is this your axe too, then?” the old man asked, holding out the silver axe.

“Yes, that one’s mine too,” the greedy logger replied.

A Message without Borders

This story is descended from a tale in Aesop’s Fables, “The Honest Woodman,” though scholars are unsure of the specific time when it arrived in Korea. Some versions present the two loggers as brothers, one greedy and one honest, but the moral of the story is always the same: Don’t seek more than what is rightfully yours, or you might lose what you already have.