Rural experience with expats in Korea

A farm tour took place in Gyeonggi-do (Gyeonggi Province) on November 8. Over 30 people took part in the event, including foreign correspondents and their families, taking the opportunity to look around some of the pastoral tourist attractions surrounding Seoul. Participants toured Soomy Village, the Euna Farm and the Kwang-I Won, enjoying the beautiful scenery and rural experiences and sampling some of the region’s delicacies.

Their first stop was to try their hand at making some kimchi in Soomy Village, in Yangpyeong County, Gyeonggi-do (Gyeonggi Province), some 90 minutes northeast of Seoul. The village provided the fresh ingredients and, year-round, offers various rural and agricultural experiences for the capital’s urban residents.

Participants donned the aprons and bandanas offered by Soomy Village and carefully sliced radishes into long, thin pieces. They poured a large amount of chili powder over the sliced radish and carefully coated each piece by hand before putting the whole mix between layers of salted white cabbage. For many of them, it was their first time to make kimchi, but they all skillfully mixed the vegetables and other seasonings, layering them between the white cabbage leaves and wrapping closed the outer cabbage leaves so that the ingredients wouldn’t fall out. Some of the participants even tore off some cabbage leaves for some impromptu sampling of the seasoned cabbage. “Korean farms are relatively smaller than those in North America or Australia, but they have preserved the country’s traditional rural ideas and values intact,” said Minister of Agriculture, Food & Rural Affairs Lee Dong-phil. “Rural restaurants cultivate crops and process them by hand, attracting tourists to their towns with the quality of their food. These people are engaged all at once in the primary, manufacturing and service industries. Visitors can enjoy a meal made of fresh ingredients, harvested locally right here by the farmers and their families.”

Participants were able to enjoy some foods made with soy bean paste, or doenjang, a fermented ingredient made from soybean plants grown in the restaurant’s back garden. 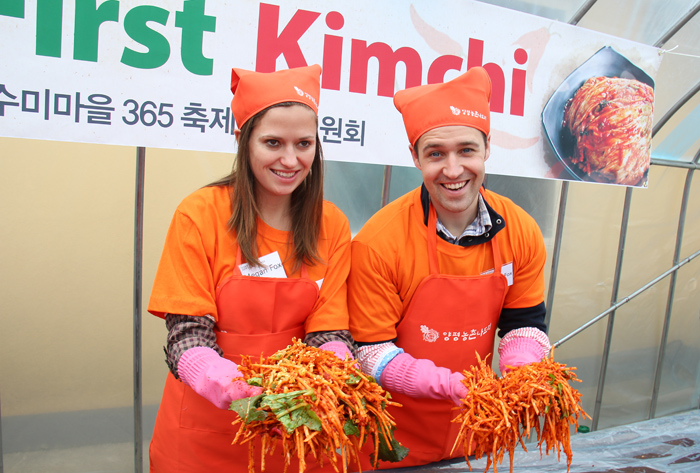 The group them moved on to the Euna Farm in Yeoju County, Gyeonggi-do, and took part in making mozzarella cheese. The farm produces various dairy products, including cheese, with fresh milk from the cows raised on the farm.

Tour members put the white curd made from fresh milk into 80-degree Celsius water and used wooden paddles to knead the cheese. Three or four people held a piece of cheese and stretched it wide, adding salt as they went. The cheese was reinserted into the hot water and kneaded some more, so that the salt would permeate throughout the cheese.

After making the mozzarella, they put some cheese, rice cake, vegetables and red pepper paste, or gochujang, into a frying pan and fried up some delicious cheese tteokbokki. They enjoyed their tteokbokki and wrapped up their daytrip to the countryside. 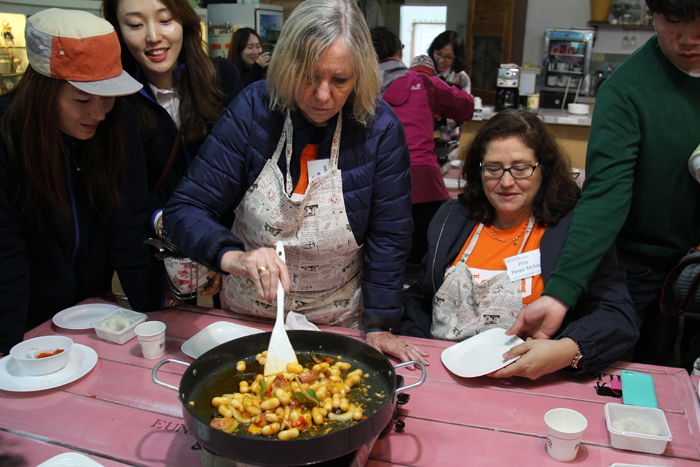 (Top) Participants stretch a ball of mozzarella, adding salt as they do so. (Bottom) Tour participants fry up some rice cake and other ingredients to make cheese tteokbokki.

“Kimchi-making was a lot of fun,” said Guy Kusters, one of the Worldwide Korea Bloggers who took part in the tour. “When I was in Belgium, I personally made kimchi with my wife. We even bought a special refrigerator to store our kimchi.”

“I’ve made kimchi before, but this was the first time for me to make cheese. It was fun,” said Takahiro Machino, an editor at the Korea Travel Newspaper. “It would be great to introduce my friends to cheese-making.”