The number of registered vehicles in Korea has exceeded 20 million for the first time.

According to the Ministry of Land, Infrastructure and Transport, the number has increased as many as 2,700 times over the past seven decades, to 20,002,967 as of October 30, from just around 7,000 back in 1945 when the government began to keep records. 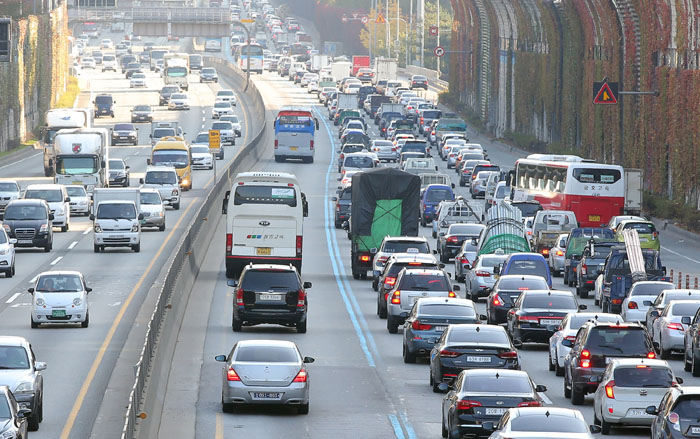 The number of registered cars in Korea has topped 20 million for the first time. Pictured is a typical freeway in Seoul, packed with commuters. (photo: Yonhap News)

Korea became the world’s 15th and, also, Asia’s fourth, nation to reach the 20 million mark, following Japan, China and India which hit that landmark in 1972, 2002 and 2009, respectively.

The number of registered cars increased exponentially in the 1980s and 1990s, periods where Korea saw its economy significantly grow in both quality and quantity.

In 1980, the number surpassed 500,000 vehicles and five years later exceeded one million. In 1992, more than five million cars were registered and in 1997, the number reached a new record of 10 million.

Of the total cars registered, 78 percent, or 15.64 million cars, are passenger vehicles. More than 93 percent of them, some 14.60 million units, are locally-produced cars.

“With this new milestone, the government plans to ramp up its efforts to keep close tabs on cars in an effective and systematic manner,” said an official from the Ministry of Land, Infrastructure and Transport.