Once upon a time in ancient Silla, there lived King Gyeongmun (r. 861—875), the kingdom’s 48th king. On top of living in tumultuous times, full of turmoil and rebellion, King Gyeongmun had another vexing problem. According to legend, he had hideously large ears. Much like King Midas of Phrygia, who was punished by the Greek god Apollo with donkey ears, King Gyeongmun never failed to wear some form of crown or hat to cover his abnormal hearing organs. Unlike King Midas, however, King Gyeongmun had no magic touch that turned things to gold. Moreover, his donkey ears were not the result of some divine curse, but simply developed one day out of the blue. King Gyeongmun was horrified. He was dumbfounded. Nobody could know.

Don’t You Tell a Single Tree!

King Gyeongmun was apparently great at keeping secrets, for nobody knew about his resemblance to a donkey, not even his queen. In fact, the only person who ever saw King Gyeongmun without either his hat or crown was the royal crown maker, who by professional necessity occasionally measured the King’s head. Whether it was out of fear or respect, the crown maker knew better than to go around telling people what he knew. Even the trustworthy crown maker, however, wasn’t completely free of the gossip instinct. Upon nearing his death, the tortured crown maker realized he simply couldn’t take his secret with him to the grave. His sealed lips must be opened at least once before meeting his maker. “Oh, I must tell somebody,” he thought. 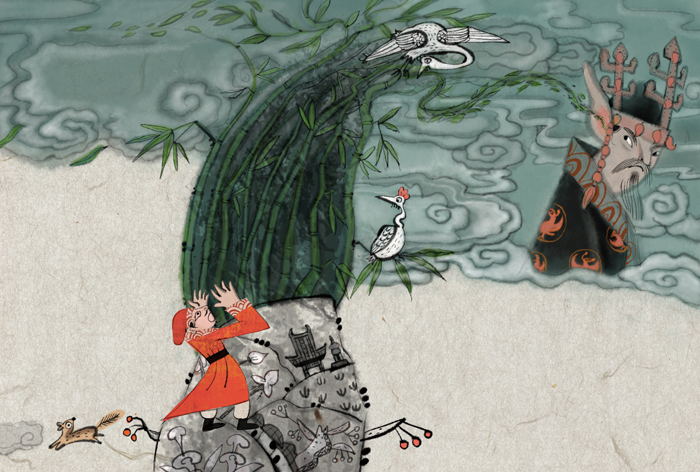 Although King Gyeongmun is a real historical figure, this story is obviously folklore. Details are described in theSamguk Yusa, or Memorabilia of the Three Kingdoms, a collection of folklore, legends and historical anecdotes from the 1200s about the three ancient kingdoms of Goguryeo, Silla and Baekje. This is an interesting coincidence, as King Gyeongmun’s tale demonstrates remarkable similarity to that of King Midas, whose barber uttered his secret into a hole in the ground, from which reeds eventually sprang up and whispered, “the King has the ears of an ass!” Similar tales exist in other countries’ folklore, often the donkey’s ears changing into the ears of a lamb or goat, which brings up the question: What is it about animal ears that makes us want to put them on our unfortunate kings?

*The series of old Korean tales is selected from Korea Magazine.