Every participant is a winner at Incheon games

Dramas that are touching many hearts are unfolding everyday at the 2014 Asian Para Games currently underway in Incheon. Every participant who has overcome some kind of difficulty to stand in the arena is a winner, regardless of whether they win or lose. These athletes, with various disabilities, have strived for years to compete in these games. They are overwhelmed with joy, more than anyone else in the world, when they win a medal. Many of their winning moments are recorded in the following series of photographs. 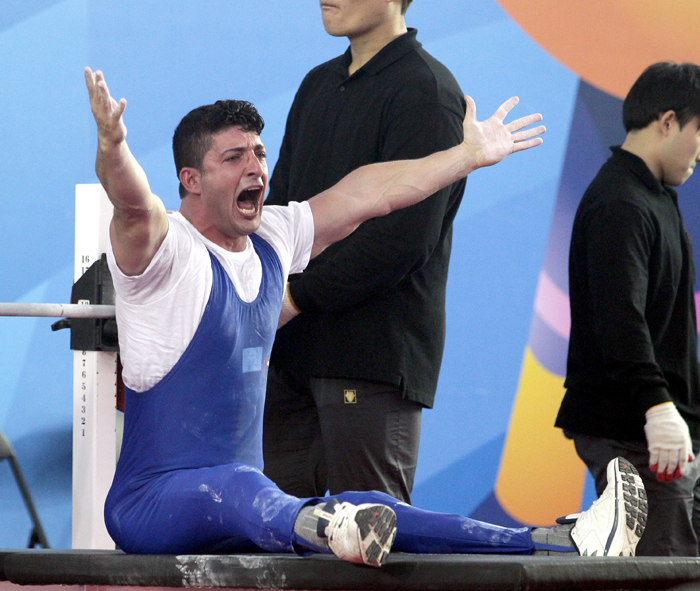 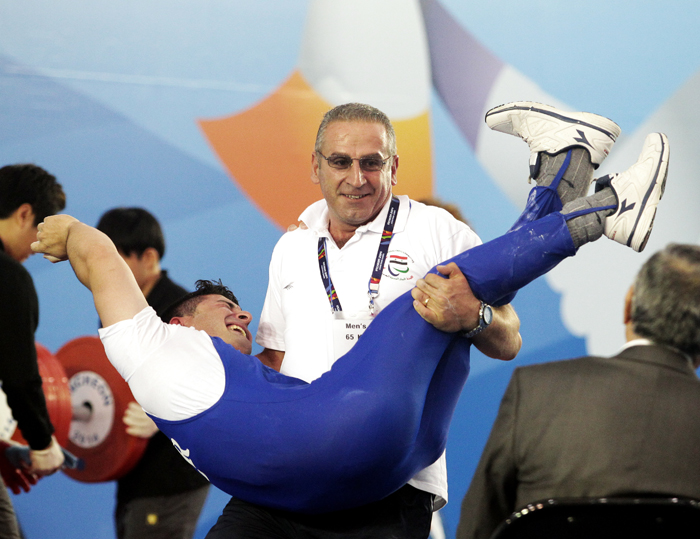 Issa Shadi from Syria is overwhelmed after winning a bronze medal in weightlifting in the men’s 65 kilograms class at the Moonlight Festival Garden Powerlifting Venue on October 21. 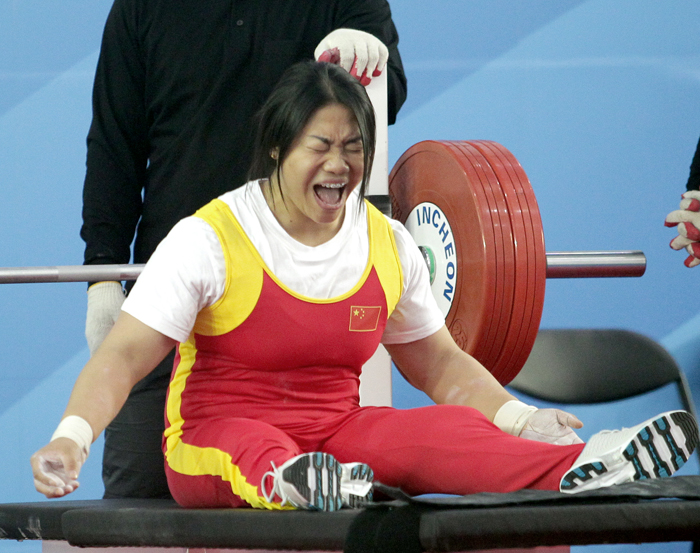 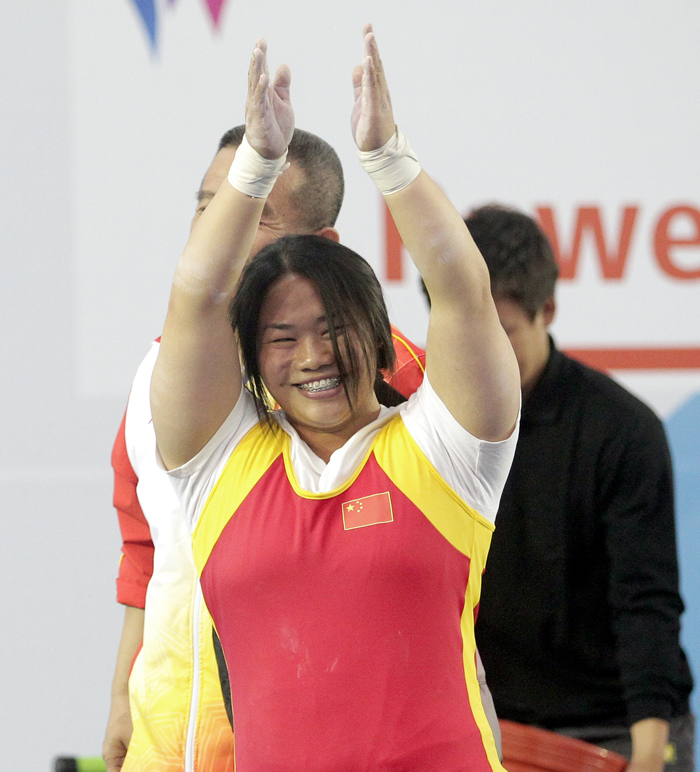 Tan Yujiao from China celebrates her victory after lifting 136 kilograms in the women’s 67 kilograms class at the Moonlight Festival Garden Powerlifting Venue on October 21. P> 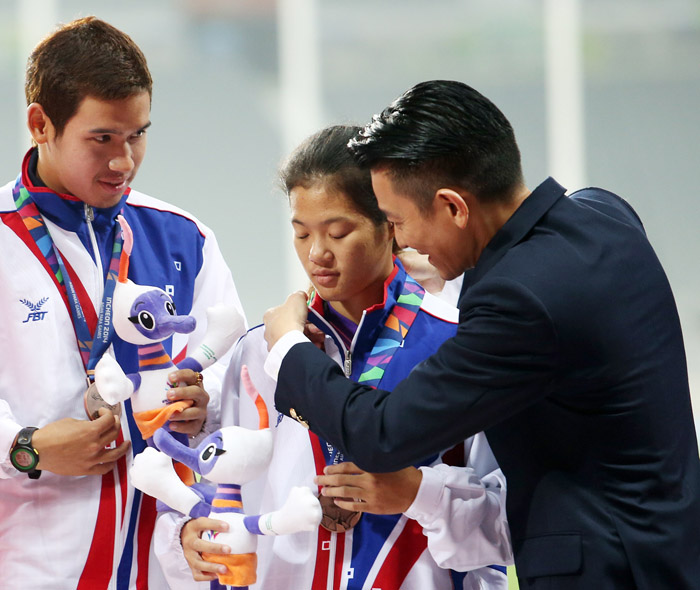 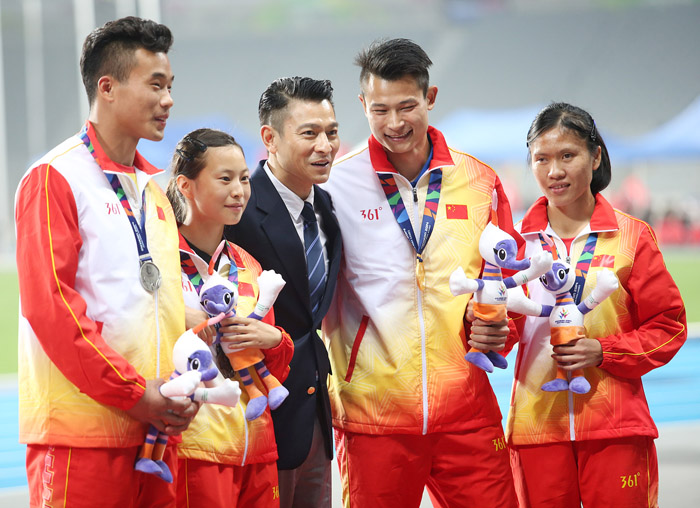 Hong Kong actor Andy Lau (middle), who is a presenter at the Incheon 2014 Asian Para Game, drapes medalists with their medals and poses for a photo with the athletes at the Incheon Asiad Main Stadium on October 20. 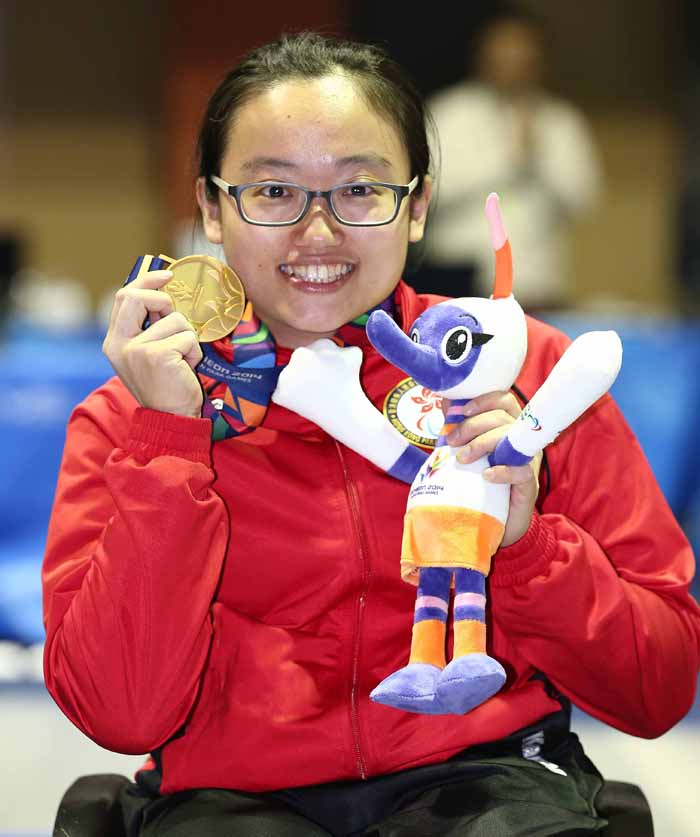 Chan Yuichong from Hong Kong holds up her gold medal after winning the women’s foil category B competition held at the Songdo Global University Gymnasium on October 19. 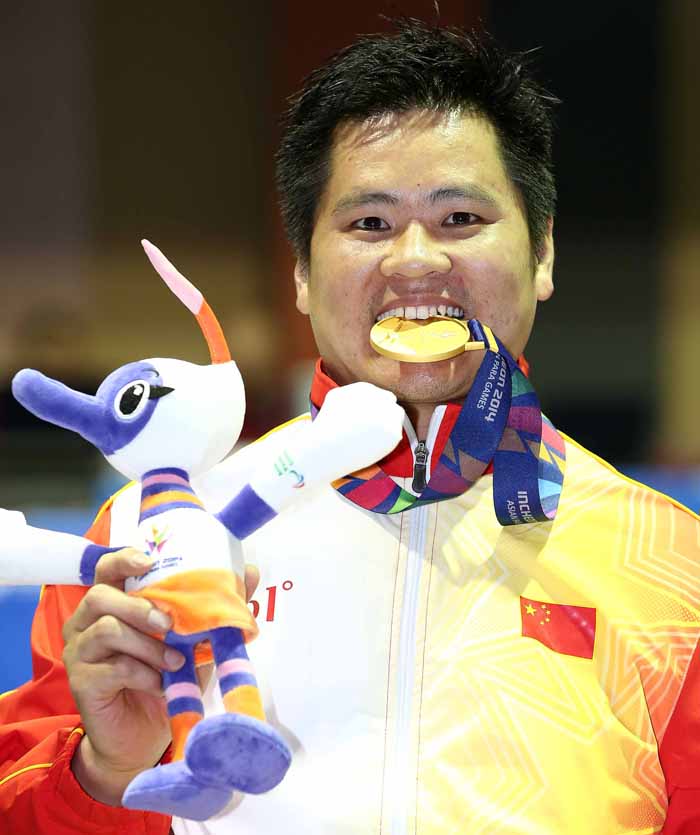 Hu Daoliang from China bites into his gold medal after winning the men’s foil category B competition held in the Songdo Global University Gymnasium in Incheon on October 19. 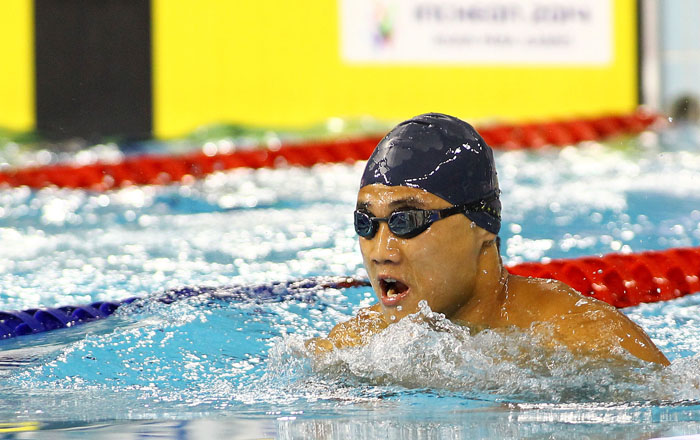 Sim Sung-hyok from North Korea cleaves through the water during the men’s 100 meter breaststroke SB6 final at the Munhak Park Tae-hwan Aquatics Center on October 19. Sim won a bronze, his country’s first medal at the Asian Para Games. 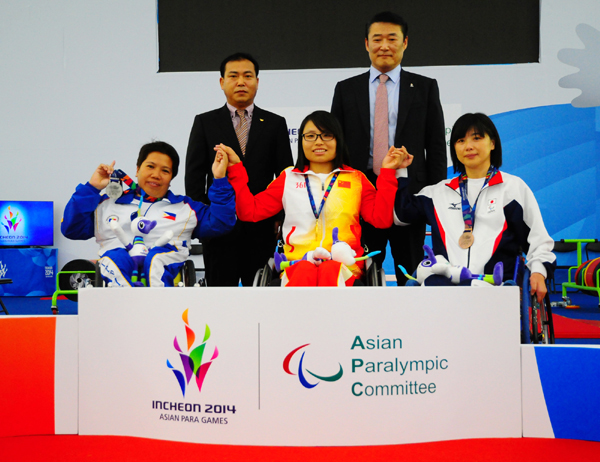 Gold medalist Hu Dandan of China (center) takes a commemorative photo with silver medalist Guion Achelle (left) from the Philippines and bronze medalist Kobayashi Hiromi from Japan. Hu lifted 99 kilograms — more than twice her body weight — in the third round of the women’s powerlifting 45 kilogram Group A competition and set a new world record, at the Moonlight Festival Garden Powerlifting Venue on October 19. 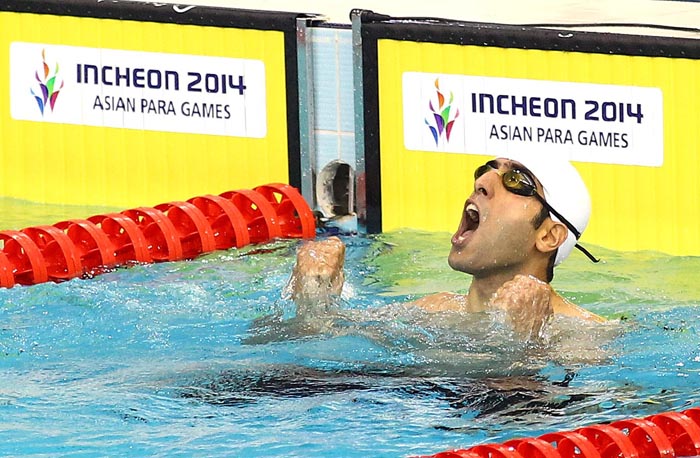 Vahid Keshtkar of Iran wins the gold medal, setting a new Asian record of 5:06.07 in the men’s 400 meter freestyle S13 final at the Munhak Park Tae-hwan Aquatics Center on October 19. 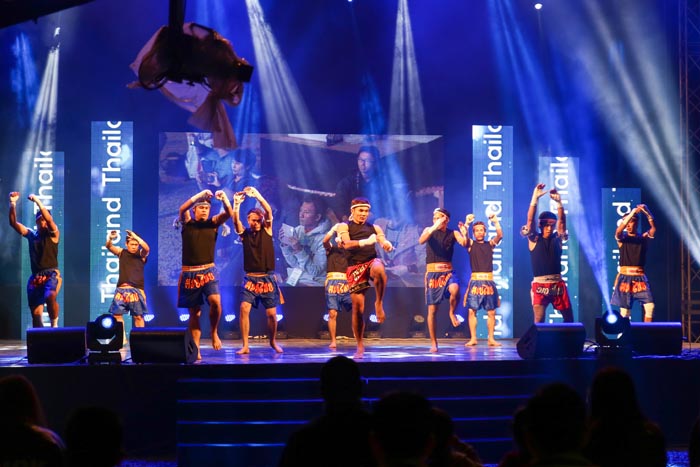 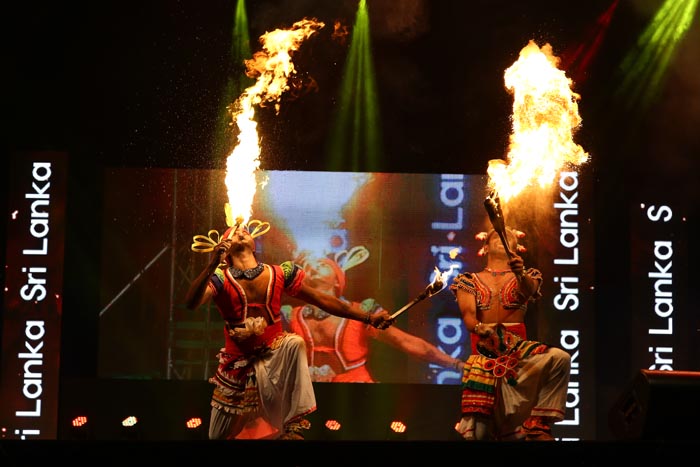 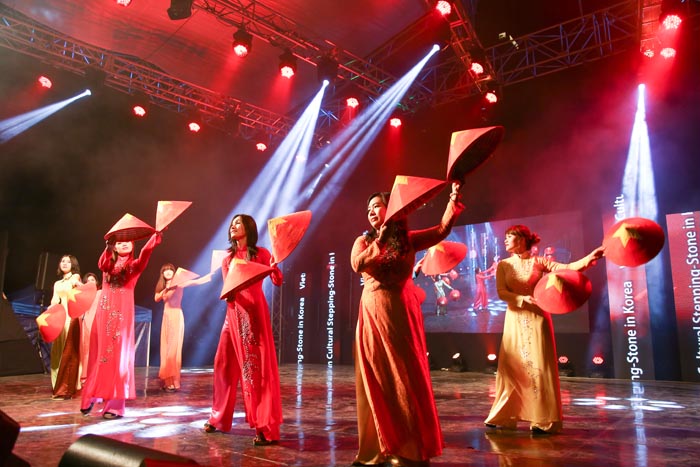 The Multicultural Nation Festival at the Para Games Village features traditional performances from Thailand, Sri Lanka and Vietnam on October 19. 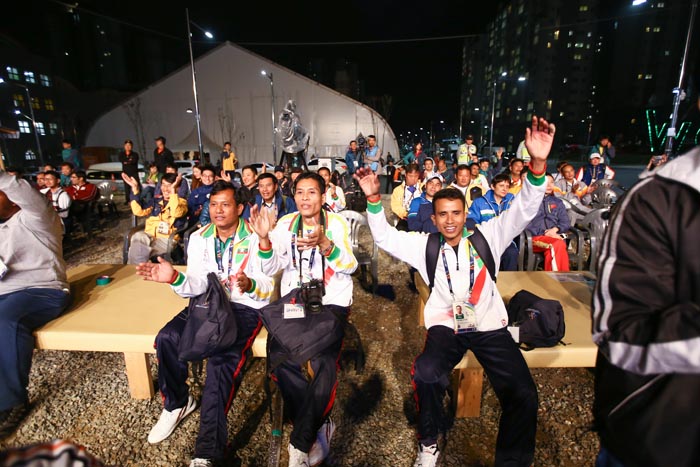 Participants in the Asian Para Games in Incheon cheer during the Multicultural Nation Festival on October 19.