Celestial Siblings: When the tiger comes knocking, look to the heavens for salvation

Among Korea’s folklore is a story that explains the sun and moon’s creation, as well as why a certain grass known as sorghum has a red tinge. The story has elements somewhat similar to those found in western tales like Little Red Robin and The Three Little Pigs . 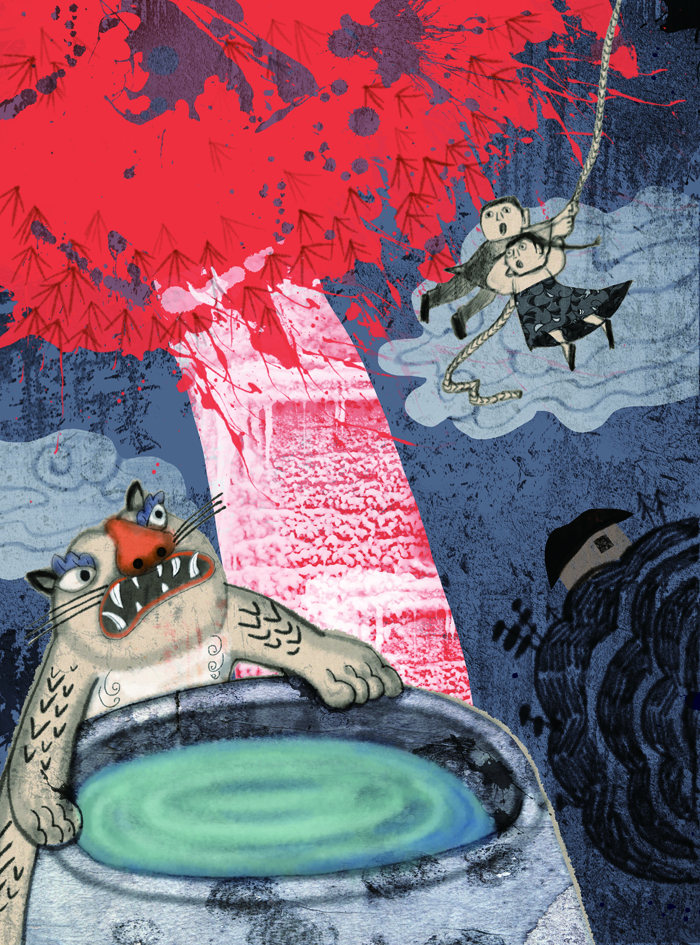 Once upon a time, there was an old lady who labored at various odd jobs, barely able to make a living. One evening, after another day’s toil, she was hiking through the mountains on her way home, carrying a few snacks for her children on her head. She was interrupted, however, by the sudden intrusion of a tiger, who threatened to eat her if she didn’t give up her snacks. Although saddened at being unable to give them to her children, she had no choice but to give them to the tiger, who devoured them and ran off. After passing another hill, however, the tiger appeared again, this time demanding her arm.

“Just let me eat one arm and I won’t eat the rest of you,” the tiger said ravenously. Helpless, the poor lady relented, and the tiger devoured another snack before running off. However, the tiger quickly showed up again and demanded her other arm, which she reluctantly surrendered. Now arm-less, the lady neared her home, but the tiger returned once more; this time, he ate her whole. After his meal, the tiger got an idea: he put on her clothes and knocked on the door, eager to eat the children inside.

“Open the door, mommy’s here,” the tiger said. “But you don’t sound like our mommy,” the children said. “That’s because I have a sore throat from working all day,” the tiger lied.

Still suspicious, the children asked the tiger to show his hand through the door’s keyhole. When he did, the children exclaimed that their mother’s hands were soft, not rough.

The tiger insisted that his hands were rough from pulling grain all day, but the children still refused to let him in. Furious, the tiger broke through the door. The brother and sister escaped by claiming they needed to go to the outhouse. They found a tree next to a well and hid themselves by climbing up into the branches. When he realized that the kids had run away, the tiger stalked outside to look for them and discovered their reflection in the well. When he demanded they come out of the well, the children in the tree gave themselves away by laughing. The tiger angrily asked them how they climbed the tree, to which the brother cleverly responded that they had greased the tree first. Obviously, this didn’t work for the tiger. The younger sister, however, naively blurted out that they had used an axe.

To their fortune, a nice sturdy rope then fell from the sky. After ascending into the heavens, the boy became the moon while the girl became the sun, for she had complained to her brother that she was afraid of the dark. When the tiger asked for a rope, he got a ragged one. He tried climbing it anyway, and soon fell to his death onto a field of sorghum, which developed its red color from the tiger’s blood.