Childhood reminiscence via old stamps – Part 4. The Heavenly Maiden and the Woodcutter

One day, a woodcutter saves a deer that is being chased by a hunter. The deer rewards the woodcutter by telling him of the secret location where the heavenly maidens descend from the skies to bathe. The deer also gives him advice on how to marry one of the heavenly maidens by hiding one of their wing-like sets of clothing and never giving it back.
The woodcutter does all this and married one of the maidens from the sky.
After many years, unfortunately, the woodcutter grows at ease at his new life after the couple have two children. He one day shows her her original set of clothes. She then takes the clothes, her two children and ascends up to heaven.
Once again in the woods, the deer tells the regretful woodcutter where a gourd draws water from earth and through which one can ascend to heaven. Wary after the clothing incident, he gets in the gourd and is reunited with his family in heaven.
This story was printed on a series of stamps released on March 5, 1970.
By Paik Hyun
Korea.net Staff Writer
cathy@korea.kr 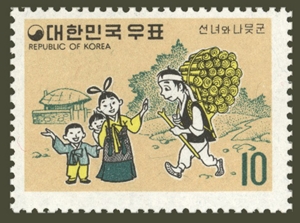 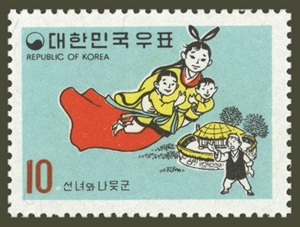 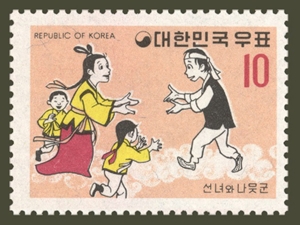 The ‘Heavenly Maiden and the Woodcutter’ stamps were printed on March 5, 1970. (From top to bottom) The woodcutter hides one of the heavenly maiden’s sets of clothes. The couple have two children. She takes the two children up to heaven. The woodcutter is reunited with his family. (images courtesy of Korea Post)