Athletes from the 45 participating countries and territories filled the medal tables at Incheon with their sweat and tears. Some of them felt delight, while others experienced regret in the space of a split second. All the results were divided into joy or sorrow. Since the opening ceremony on September 19, athletes who obtained their desired result will now aim higher. Those who were unable to achieve their goals make promises for the next games where they will realize their dreams.

Outside the stadiums and venues, the city of Incheon offered an opportunity to enjoy a festival of harmony and unity. Korea.net would like to review a range of captured moments from the games, moments that show promise for the next Asian Games in Jakarta in 2018.

The Incheon Asian Games 2014 start on September 19 with a commencement declaration by President Park Geun-hye. The Incheon Games are the first Asian Games in which all 45 members of the Olympic Council of Asia participated. 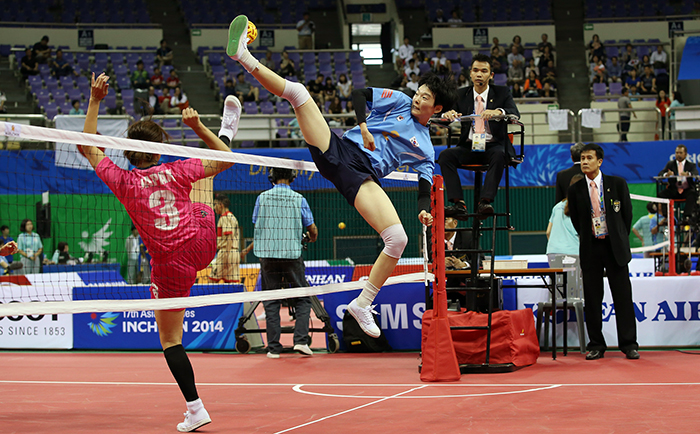 Korea’s Kim Iseul (right) takes the ball during a sepaktakraw group match with Japan on September 20. Sepaktakraw is not a popular sport in either Korea or Japan, with the rules being perhaps unfamiliar to audiences. Nonetheless, the sport was soon attracting fans as it features various kick techniques and bold attacks. 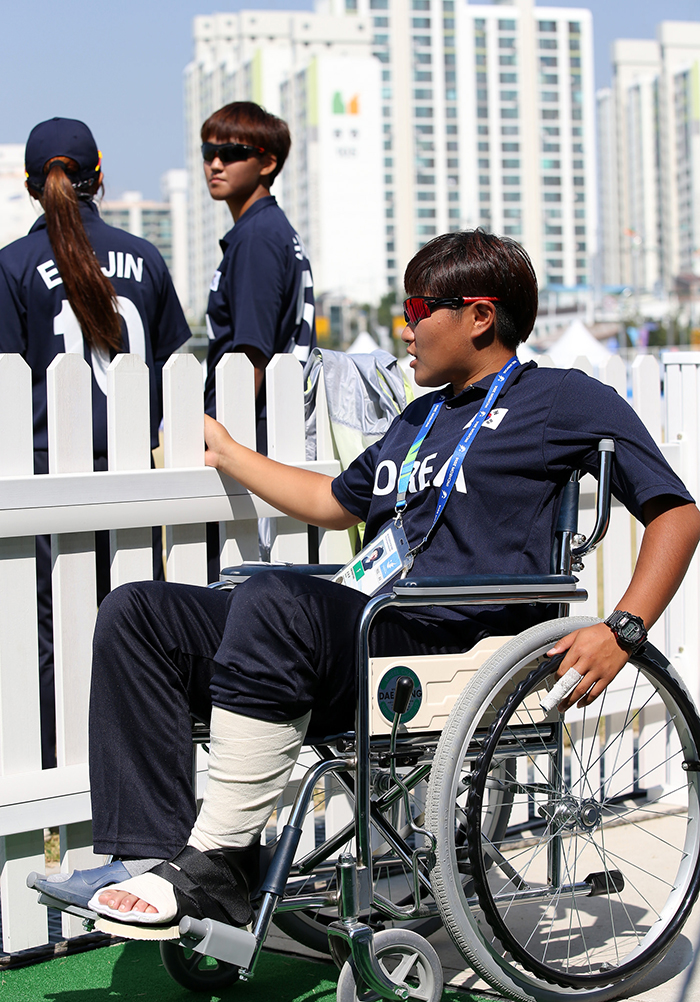 Korean female cricket player Kim Bokyung watches her colleagues warm up before the match against Hong Kong on September 22. Kim suffered an ankle injury the day before the match, but cheered for her teammates while wheel chair-bound, despite the hot weather. 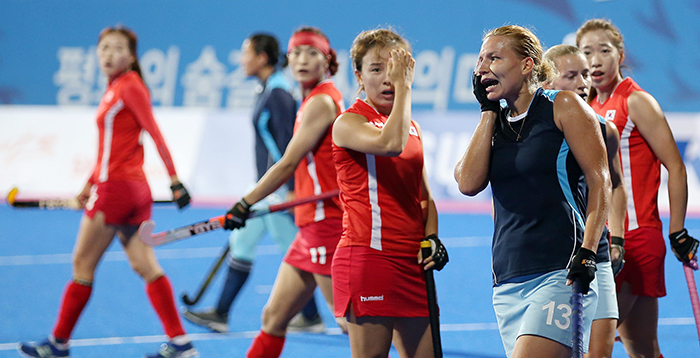 Korea’s Kim Darae (second from right) and Alissa Chepkassova (right) from Kazakhstan cover their faces after being injured by the ball during a preliminary match in women’s hockey on September 22. The Kazakhstani athlete could have faced bigger injuries, but she endured the pain and continued on the field. 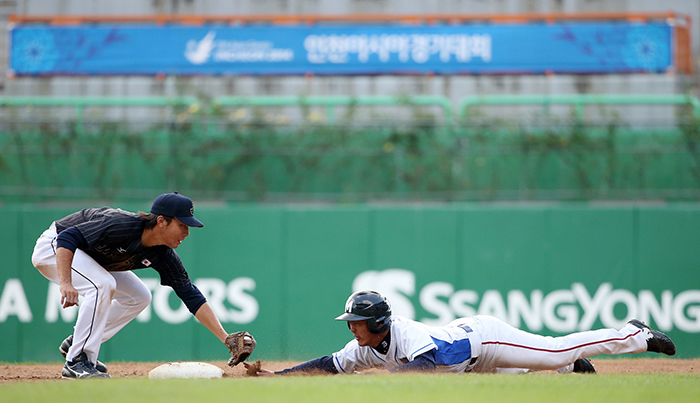 Japan and Mongolia hold a preliminary baseball match on September 25 at the Munhak Baseball Stadium. Japan was predicted to win the match even before the game began. The results were true to the prediction, and Japan easily won. Nonetheless, the stadium was filled with the challenging, energetic spirit of players from Mongolia, where baseball is somewhat unpopular. The audience cheered for them, regardless. Chultem Munkhsaikhan, the Mongolian manager, said, “We compete in a game to win. We will do better and win next time,” emphasizing that the team will continue to make improvements. 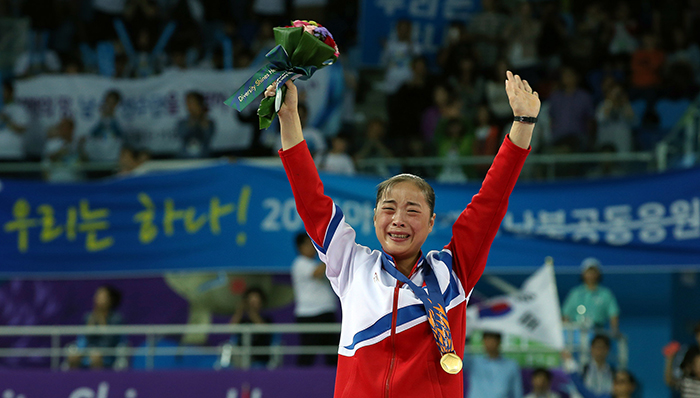 Kim Unhyang of North Korea raises her arms while shedding tears after winning the gold medal in the women’s beam final on September 25. Kim said, “The blood and sweat in training is the weight of the gold medal,” hinting that she had been training hard. 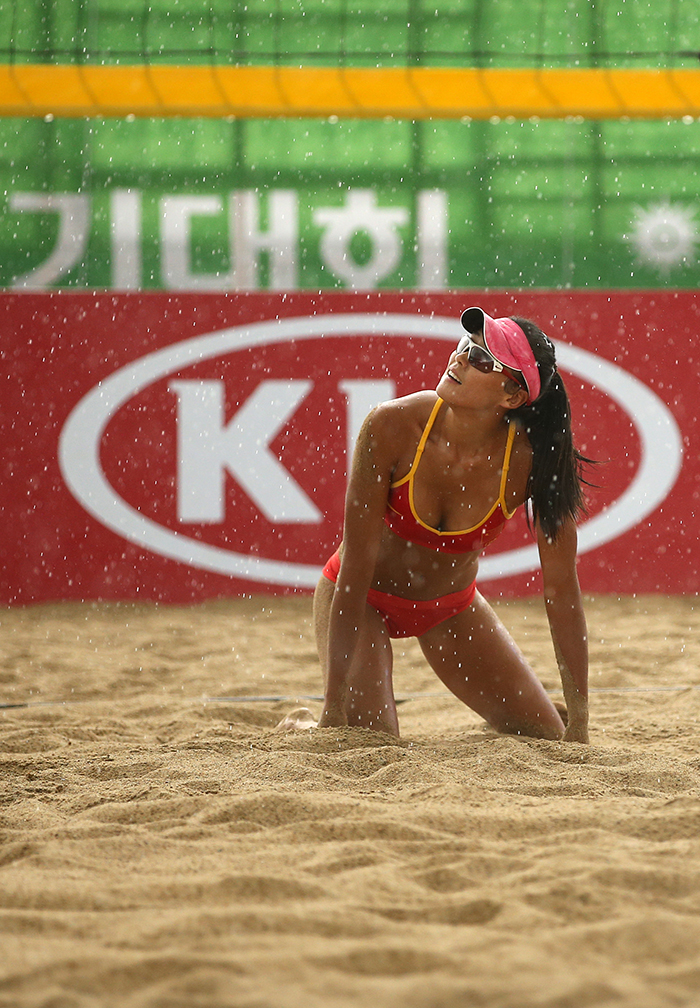 China’s Ma Yuanyuan looks at the falling showers after losing a chance to score a point during the women’s quarter-final match between China and Kazakhstan in beach volleyball on September 26. The weather was mostly fine during the games, but it rained heavily that afternoon, leading to temporary stops in many events.

Park Tae-hwan (left) smiles as he receives a birthday cake from Sun Yang, a rival Chinese swimmer, on September 26, one day before his actual birthday. The Asian Games are not only a place where athletes compete, but also a place for harmony and friendship among all Asians, as shown by the Korean and Chinese star swimmers. Sun brought the birthday cake as Park posed for photos after winning the bronze medal in the men’s 4×100 meter relay medley. Sun emphasized their friendship by smearing icing on Park’s face, reflecting a camaraderie that has been built up as they shared adjacent lanes during the long period of competition. 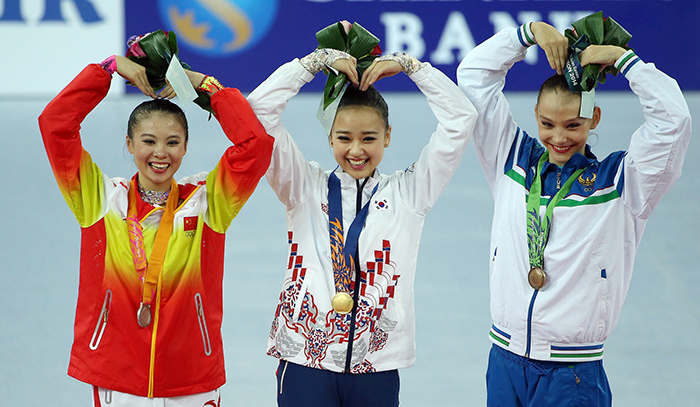 Son Yeonjae (center) becomes the first Korean athlete to win a gold medal in women’s rhythmic gymnastics in the Asian Games on October 2. Son put on a nearly flawless performance, except for some minor mistakes in the ball event. Son showed sheer happiness on the podium.

The closing ceremony of the Incheon Games is held on October 4 after finishing the games’ 16-day schedule. The VIP seats are filled with Prime Minister Chung Hong-won and other high-profile officials, including North Korea’s Hwang Pyong-so, director of the North Korean military’s General Political Bureau, Choe Ryong-hae, secretary of the ruling Workers’ Party, and Kim Yang-gon, director of the party’s North Korean United Front Department. The surprise presence of North Korean representatives drew the most media spotlight. To report every moment of their attendance, journalists engaged in a fierce competition to win seats close to the VIP section, seats which are normally less popular among the media.