A geek’s all-inclusive observations on Korea 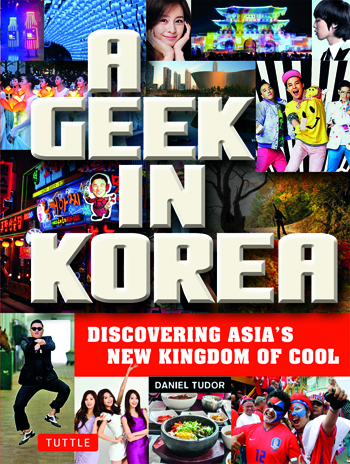 Daniel Tudor, the author of “Korea: The Impossible Country,” has come back to the world of publishing with a new book entitled “A Geek in Korea — Discovering Asia’s New Kingdom of Cool.”
If you could say his first book was meant for a more knowledgeable audience, like academics and journalists, as he took a serious approach to the modern face of Korea, not limiting himself to North Korea, the Korean War or the conflict on the Korean Peninsula. This new book is for a younger audience, filled with color photographs and structured somewhat like an encyclopedia.
Subtitles and Q&A style narrations allow readers to easily get engaged and to understand many aspects of modern Korean society.
Opening with the “Korean Identity,” Tudor lists many of the representative emotions that Koreans use to describe themselves, such as jeong, han and heung, while looking at many aspects of modern urban life that include military conscription, love and marriage. Trending online words like aegyo are deciphered, too.
In his next section, “Traditional Korea,” the author summarizes Korea’s history and introduces the background to its many co-existing religions. He finds Confucianism as the root cause of the heated pursuit of an advanced education. He uses the concept of Dano to explain the affection for drinking and dancing. He talks about martial arts like traditional wrestling, ssireum, and taekwondo. He explains the different attitudes toward Hanok, traditional houses.
Following that is the “Modern Korea” chapter, in which Tudor outlines society’s expectations for men and women, their ever-consciousness of their appearance, life as a non-Korean in Korea, the popularity of cafés in particular, democracy and the struggle for it, the selling of ham and the real estate markets of Seoul, Daejeon, Daegu and Gwangju.
“Korea’s Internet Mania” sells the case for Korean netizens’ might, defining the role played by Internet cafes, or PC bangs, illustrating the lives of pro-gamers, outlining the local web portals that are defiant of Google and explaining Internet slang words. An interview with popular YouTube personalities, like the makers of the “Eat Your Kimchi”, helps to explain reasons behind the online popularity of things Korean.
“Society and Daily Life” explores Internet rumors of xenophobia and touches upon the subject of dog meat. It debunks misconceptions about Korea while recommending some “best eats” restaurants. It expands the definition of kimchi. He also touches on social issues, like an ageing society and suicides.

Other topics covered in his book include people at work, the music scene, movies and television, how to describe people, and society in multiple dimensions.
The final thread, “Visiting Korea,” halves Seoul into Gangbuk and Gangnam, sections north of the Hangang River and south of the river, while Busan and Jejudo Island aren’t left out either. From better known locales to the lesser-traveled areas of Gangwondo Province, the cities of Gyeongju and Andong, and to Manisan Mountain on Ganghwa Island, all are given an honorable mention. Standout aspects, like skiing, public transport and traveling to North Korea, round up most of the remaining questions related to Korean travel.
Fans of Koreana that collect as much information online as they can will enjoy putting together the puzzle pieces of the holistic picture this book paints. The provided information is intriguing, and not without depth, showing the author’s insights mashed between the lines. Continuing from his first book, his somewhat cynical, yet still warm, gaze, and his accounts of Korea, gives readers from around the world a diverse look at a cooler Korea.